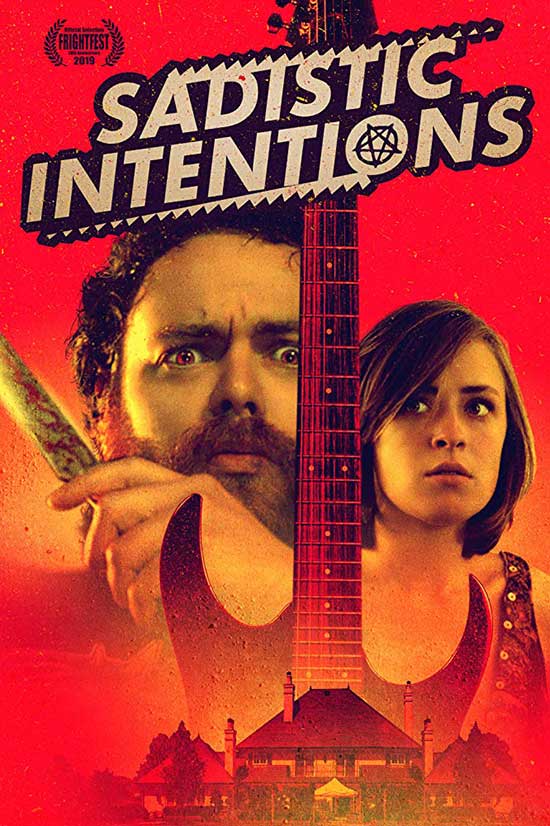 A psychotic musician lures a fellow band-mate and an unsuspecting woman to a remote mansion for a night of romantic deceit and grinding metal mayhem.

The opening shot of “Sadistic Intentions” starts with a beautiful flower lightly sprinkled in blood and ends with a hammer-bludgeoned body being dragged away. While the murder does tie back to the story, that scene is the entire film in a nutshell – It starts simple enough, but things turn rather dark by the end.

Stu is a twitchy guy in a band. He is waiting for his bandmate to contact him with the address for practice. When his buddy Kevin contacts him, Kevin is acting strange and doesn’t give the address before disconnecting. We watch as Stu kills time writing lyrics and driving until he gets the address.

Chloe is a young weed smoker who wants great things in life but has no idea how to get where she wants to go. Instead, she gets high and studies her fish as she dreams of being a marine biologist. Kevin interrupts her reverie with a weed offer that she cannot turn down. All she needs to do is come to the address that he gives her, and his buddy will work the deal between Kevin and her. Against her better judgement, she agrees.

The two unfamiliar folks meet at the designated location, which is a large mansion. As they wait for Kevin to arrive, they explore the house and begin to talk.

Stu is hesitant to interact. He seems constantly bewildered by Chloe’s chatty, pleasant nature. He acts conflicted as she asks questions about him, almost as if he does not know how to answer or explain himself.

Chloe makes herself at home in the mansion. Waiting for Kevin to show up so that she can make her buy and move on, she does her best to pass time by learning about Stu, his music, and his friendship with their oddly missing host.

As the evening rolls on, Stu begins to share more personal details as Chloe’s siege of pleasantness has its intended effect. He talks about his passion for creating music, and how Kevin and he want to create something new and meaningful with their music.

While the awkward meet cute continues, Kevin is still nowhere to be found. Yet, when Stu calls Kevin, Chloe, who is inside the mansion, hears Kevin’s cell phone ringing.

Trust can be a very deadly thing as Stu and Chloe’s situation begins to spin into a nightmare.

“Sadistic Intentions” sets up an interaction between two characters who do not fit well together. The film focuses so intently on these people that, if not for the occasional interrupting phone calls, the viewer could be excused for all but forgetting that there is a third point to this triangle. In some films, this bit of distraction would be there for filler. Here, the growing connection between the two characters is essential to both the story as well as raising the tension when the long-promised sadistic intentions are revealed.

In such a character-driven film, both the script and the acting must be perfectly pitched to maintain the audience’s interest in these ADHD-addled times. “Sadistic Intentions” handles both very well.

Writer/director/editor Eric Pennycoff’s script moves easily from the spastic Stu to the placid Chloe to the unhinged Kevin with scenes that are thick with implied menace alongside scenes with smart, realistic conversations. By the time the real horror begins, the viewer is invested in the quirky couple and their situation, making the threat of Kevin and his plans more intimidating.

Jeremy Gardner and Taylor Zaudtke as Stu and Chloe, respectively, deliver fantastic performances. Gardner makes freaked-out, buggy Stu into a character you like and, ultimately, pity to a certain extent, but he never fails to be entertaining. Zaudtke could have played Chloe as a stoner airhead; instead, she imbues the character with a moral core that is present even when she is being a goofball. The actors make their multiple conversations entertaining without sacrificing the character development. 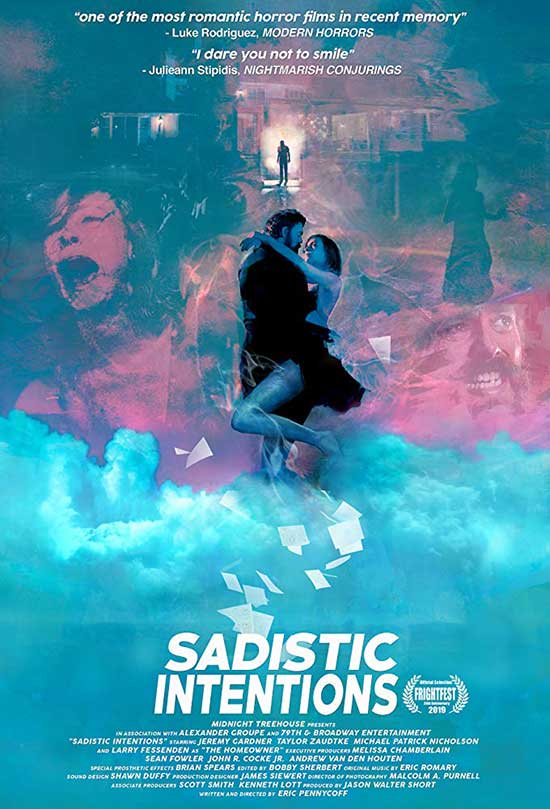 Even though Michael Patrick Nicholson’s Kevin is off screen for nearly two-thirds of the film, the small snippets we do get show the audience a person who’s grip on sanity and restraint is nearly gone. When he does make his entrance, he certainly seems convinced his plans, no matter how sick and depraved, are the best path forward. At times, he almost seems to be channeling Crispin Glover which seems to add another unreal and unnerving element to his performance and to the film in general.