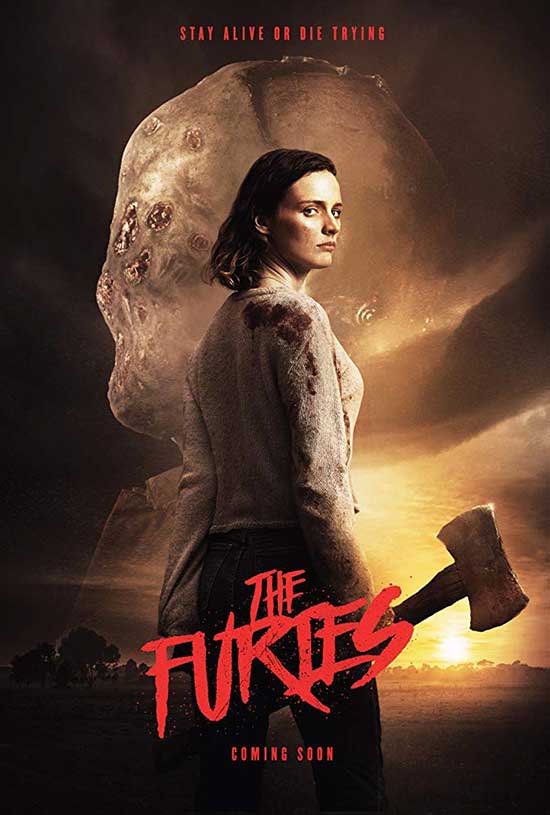 Women are kidnapped and dropped in the woods where hulking men in gruesome masks seeks their bloody deaths for sport.

The Furies (2019) stars Airlie Dodds (Killing Ground 2016) as Kayla, a university aged (though seemingly older) girl with epilepsy who is kidnapped and forced to play in a macabre game where masked men hunt unarmed women for a chance at survival and the opportunity to kill again. Tony D’Aquino directs a script he penned (his feature debut for both), and while neither area is without draw, both are glaringly flawed in their execution.

The plot (minor spoilers) follows Kayla as she figures out the game’s rules, which require “beasts” (masked killers heavily inspired by the tepid 2000’s Texas Chainsaw franchise entries) to kill “beauties” (abducted young women) while protecting a single girl who is linked to a bomb in their head. If the beast’s particular beauty is killed, then the bomb goes off, offing them in gruesome fashion. Kayla quickly bands together with other women in her struggle to stay alive and look for her also-kidnapped friend Maddie (Ebony Vagulans, My Life is Murder series 2019). One such tag-along is Rose, played by Linda Ngo, (Top of the Lake series 2017) who is oddly cast as a mentally disturbed girl of indeterminate age; she could be ten or thirty, who the hell knows. This plot is ultimately a reskinning of Nimród Antal’s 2010 Predators film, but that’s not a bad thing. Unfortunately, the characters themselves are unappealing and poorly written, which hurts this gorefest enough to leave a mark.

And it is a gorefest, make no mistake. While there aren’t countless kills, those present are designed to please blood-and-guts junkies of all walks. There’s arm-tearing, axe-chopping, and head-destruction of various sorts on display. The stand-out is a slow “face-shearing” via rusty axe, which even made me squirm for a moment. The costuming of the beasts is attended to with an equal attention to detail in most cases, though a few of them (they’re all decked out with different “accessories”) are decidedly low budget in comparison to the others.

Where the film massively stumbles is in all of its character’s interpersonal interactions. They’re chocked to the brim with unmerited and cliched reactions, such as when a victim is horrified to learn her savior had to kill in order to rescue her. Would anyone actually feel that way, given the dire circumstances? Such ridiculous over-reactions and a slew of downright insipid arguments force the capable cast to offer inauthentic emotions that read as bad acting, when they’re more the result of a bad script.

D’Aquino’s cinematography and editing is occasionally frustrating, as well. While Kayla’s epileptic fits are relatively unimportant to the plot (as is her ability to “see” through other beast’s eyes during them), D’Aquino uses such moments to cut back and forth to unwelcome jarring shots of Dodd’s face. There are also several overlong scenes that should’ve by all rights been trimmed, such as when Kayla is stuck in a box while a horrible piercing noise plays—it quickly becomes more annoying than unnerving, and deeper cuts to the film would’ve only served to improve it.

The title is problematic, too; it seems to imply the hunters will become the hunted as the abused women rise in violent protest. This, despite a few moments throughout and during a very unnecessary ending scene, doesn’t happen. There’s never a female revolt or unleashing of the fairer sex’s internalized rage, as better films like Alice Lowe’s excellent 2016 film Prevenge (check out my review!) features. This leaves the viewer feeling underwhelmed by the end of the film instead of satiated.

This isn’t to say that the premise of the film is a bad one. The idea of monstrous killers competing to both kill and protect for their life is fascinating, and the simple setup The Furies offers allows for a well-paced reveal of the overall plot. This is all undermined, however, by a tagged-on ending where the now-loony Kayla starts on an unlikely road of vengeance against those who run the whole shebang. If followed by a direct sequel film, this tired and shallow revenge story would only serve to deprive viewers of what could be a much more interesting character-driven arc involving another round of the “game.” Here’s hoping that a sequel, should it arise, ditches the poorer elements that drag this slasher entry from great to merely watchable.