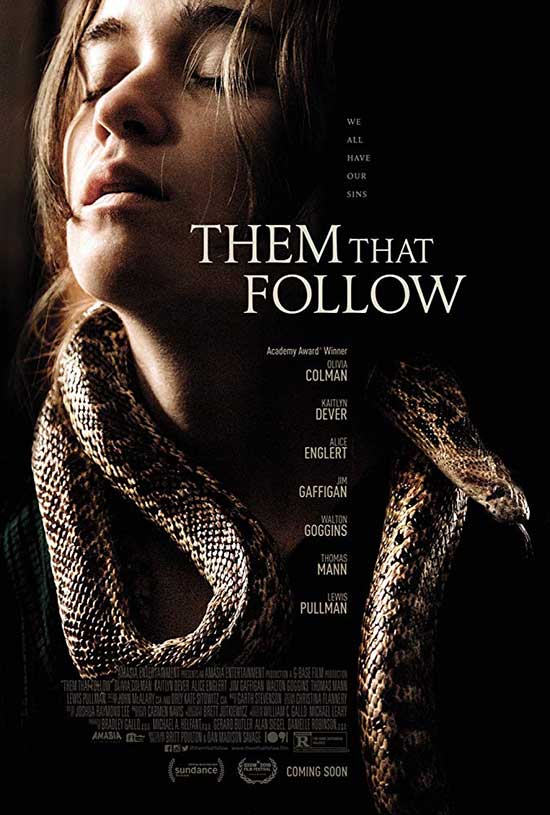 Set deep in the wilds of Appalachia, where believers handle death-dealing snakes to prove themselves before God, a pastor’s daughter holds a secret that threatens to tear her community apart.

Them That Follow marks the directorial debut of Britt Poulton and Dan Maddison. Alice Englert (Beautiful Creatures) plays Mara, the daughter of a Pentecostal minister who preaches in the backwaters of an unnamed town. Lemuel, Mara’s father and performed by Walter Goggins (The Hateful Eight), is a fire and brimstone kind of priest, the kind who handles snakes like they’re nothing more than incense holders.

In this strict religious environment, Mara has found love, or the nearest equivalent, in Augie (Thomas Mann, Kong: Skull Island) a strapping young lad who has long left Lemuel’s church behind him. Having fallen pregnant to Augie, Mala finds herself in a precarious position. To admit to her pregnancy could not only see her disowned by her puritan father but also cause problems for junkie turned devout believer, Hope (Olivia Colman, The Favourite). Hope is the mother of the once religious Augie and it wouldn’t do well to for everyone to find out he’s knocked up the priest’s daughter. Perhaps Mala’s salvation can be found in the hands of Garret (Lewis Pullman, The Strangers: Prey at Night), a parishioner so devout he’s willing to losing his livelihood for Lemuel when the priest comes under scrutiny from the police.

If it wasn’t for the modern trappings of cars, pregnancy tests and the like, nothing is stopping Them That Follow being a period piece that can easily be observed from afar. A film like The Crucible or even The Witch, where the audience can observe the church’s unusual behavior through the comfort of a side-eye. And yet Lemuel’s behavior and the severity of Mala’s predicament is heightened because we know this story is being told yesterday, today or tomorrow. You’d be hard pushed not to scream for Mala to get the hell out of town when we first meet her.

And yet, the film’s directors don’t wag their fingers at Mala’s community from the outset, nor do they immediately pour scorn on their actions. They don’t need to tell us checking to see if a woman is still ‘intact’ before she gets married is archaic and a touch gross. When a parishioner is bitten by one of Lemuel’s snakes, resulting in a deadly infection, the drama comes not from the group decision to cut his arm off with a saw, but from the fact that it’s the only option they have in light of their beliefs and Lemuel’s previous misdemeanors. As Mala is farmed off reluctantly to Garret, no one says anything because it wouldn’t be right to do so. However, these are not bad people. Their religion, as we learn from Hope, has the ability to help. For others, it’s a way to oppress and tow a line of misogyny that most would believe would have died a long time ago.

Hardly being off-screen, Englert ably carries the film on her shoulders, lending honesty to a movie which can often feel right outside your comfort zone. It would be foolish to not acknowledge the work of Goggins and Coleman, who both do so much with their characters. Goggins never allows Lemuel to fall into pantomime; a hard task when your primary motivation is to waggle snakes at people in church. Coleman, for her part, accentuates any material she’s given, including the rather abysmal The Iron Lady. As such, it’s always a pleasure to see her stepping into a role that couldn’t be as far removed from The Crown if tried any harder.

Languid without overstaying it’s welcome, and with some excellent performances, Them That Follow is a coming of age drama set in the most alien of scenarios