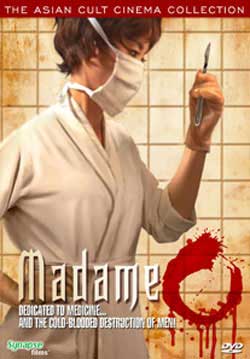 At the tender age of sixteen, Seiko (Michiko Aoyama) was sexually abused by three men. This horrifying attack scarred her mentally and resulted in her getting pregnant and infected with syphilis.

Now a well-respected doctor in Japan, she practices medicine by day and prowls the city streets at night in search of lovers. Possessing a raging desire for revenge against man, she destroys them with the one weapon they cannot resist…sex! Finally marrying and settling down, Saeko’s life changes for the better. But, her new husband (Akihiko Kaminara) may have a dark secret of his own…

“Madame O” was a pretty good flick and in some ways it was a little ahead of its time. I had heard of it before but I did not really know what it was about, although I am really glad I got the opportunity to check it out. It is just an interesting film with an interesting plot, good characters, a fair amount of surprise, and just a really enjoyable story.

It actually reminded me of a few other movies such as “Ms. 45”, “She Killed in Ecstasy”, and even a much underrated Asian film “Freeze Me”. It is one of those women in power films where you are rooting for the female lead even though she is doing some pretty horrific things (not that it isn’t justified most of the time). It’s just too bad that Saiko takes out her anger on somewhat innocent men and not the three who raped her years prior, although you have to wonder about the character of the men that want to pick her up in a bar for a one night stand.

I really liked the character of Saiko; she is almost like The Punisher or something as she is concerned with vengeance. She is a character to sympathize with and even though she does a lot of questionable things (like infecting men with an STD and performing secretive tube tying operations on some women) you really feel for her due to the things that she has gone through. I really don’t think she is a bad person, but being raped at a young age combined with her father’s blame of her for it she is left pretty messed up. Who wouldn’t be after going through something so emotionally scarring.

I feel like I have to mention the abortion scene. When Saiko realizes that she is pregnant she takes it upon herself to perform an abortion on herself to get rid of the fetus. I have never seen a scene quite like this before and while it isn’t graphic it is still disturbing at the same time (sometimes, like in this case, less is more). It is a powerful scene and I am surprised I hadn’t heard anyone talk about it before. I’m sure it is one of those scenes that most women would have trouble watching.

One of the things I liked most was the twist toward the end. It just comes out of nowhere and I for one didn’t see it coming. It is a subtle twist and not a ridiculous one like that talentless hack M. Night is Shyamalan famous for. I don’t want to spoil anything but let’s just say that this twist kills any hopes of a happy ending.

I really dug “Madame O”. I thought it was just a great film in general and there is really nothing negative that I can say about it. It is an old film that covers issues that are still very taboo today which makes it very much ahead of other films of the same time period. Check it out if you run across a copy of it as you may find yourself enjoying it as much as I did.