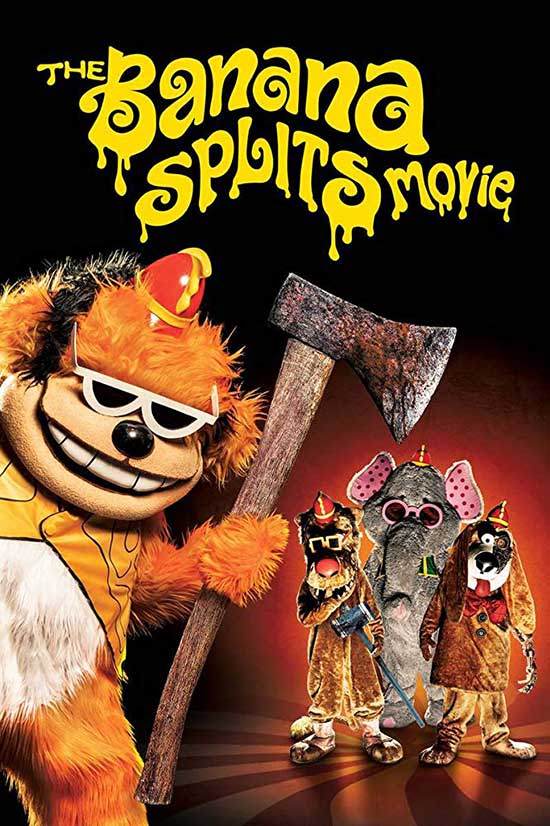 A boy named Harley and his family (brother Austin, mother Beth, and father Mitch) attends a taping of The Banana Splits TV show, which is supposed to be a fun-filled birthday for young Harley and business as usual for Rebecca, the producer of the series. But things take an unexpected turn — and the body count quickly rises. Can Harley, his mom and their new pals safely escape?

Something a little different today, kiddies! Everyone has been talking about it, and I let my curiosity override my dying childhood. So today we have THE BANANA SPLITS MOVIE, written by Jed Elinoff & Scott Thomas, directed by Danishka Esterhazy.

I grew up on this weirdness, ok? The Krofft studios provided everything I loved about my Saturday mornings as a kid. This was one of my favorite shows, second only to The Funky Phantom. Yea…I’m old. Get over it.

The Banana Splits Show ran from 1968 to 1970. In its original incarnation, it was a variety show, hosted by the eponymous characters – Fleegle voiced by Paul Winchell, Bingo voiced by Daws Butler, Drooper voiced by Allan Melvin, and Snorky who didn’t say much. Snorky was basically the Harpo Marx of the bunch. 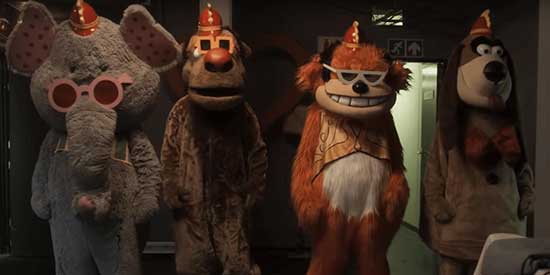 All of these original voice actors have long passed away. Daws Butler in 1988, Paul Winchell in 2005, and Allan Melvin in 2008. So for this film, rather than recycle sound bites, all the characters are voiced by the very talented Eric Bauza. I am familiar with his work from many modern animated series, including Star Vs The Forces of Evil. 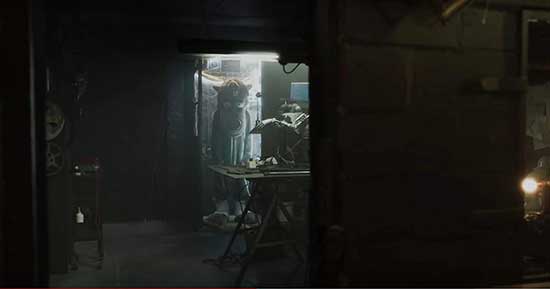 It is interesting to note that the movie is rated R by the Motion Picture Association of America for horror violence and gore, marking it as the first R-rated movie adaptation of a Hanna-Barbera or Sid & Marty Krofft property. It is said that the film is based on an unused and rejected FIVE NIGHTS AT FREDDY’S script from when Warner Brothers originally had the FNAF movie rights. That does explain a lot, if its true.

So let’s get into it…

Our story begins with a young boy named Harley (Finlay Wojtak-Hissong) who is a dedicated fan of the Banana Splits Show. This film is set in the modern day, so the assumption is that the show has continued to air since the 1960s and has maintained a strong popularity.

Today is Harley’s birthday and his mom Beth (Dani Kind) has gotten tickets for the whole family to go watch a live taping of the Banana Splits Show. So along with his 19 year old brother Austin (Romeo Carere), his dad Mitch (Steve Lund), and a friend named Zoe (Maria Nash), they travel to the TAFT Studios (I love that play on the name of the original studio) to attend the taping. 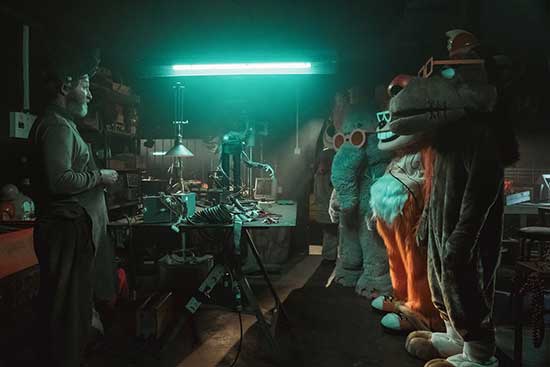 There’s already a huge line when they get there, and we meet some interesting characters. There’s the live bloggers Poppy and Thad (Celina Martin, Kirishan Naidoo) who are adult superfans, and the stage dad Jonathon and his daughter Parker (Keeno Lee Hector, Lia Sachs) who are determined to meet the producers. These characters become important later when the studio page Paige (Naledi Majola) reveals that there is a lottery to stay after the taping to meet the cast. The above characters win the lottery, although Harley does not. Austin takes up the matter with Paige and arranges for Harley to be part of the meet-and-greet group as a birthday present.

Meanwhile, behind the scenes of the taping, there is drama afoot. We meet Stevie (Richard White), a human acting alongside the costumed characters who thinks he’s the REAL star of the show. He’s a drunk and a jerk, and you won’t like him. According to Harley, nobody does.

There is also Andy (Daniel Fox), the new head of programming for the network. He hates this show, and his first order is to cancel it immediately. It is with great glee that he tells the showrunner Rebecca (Sara Canning) that she is out of a job. 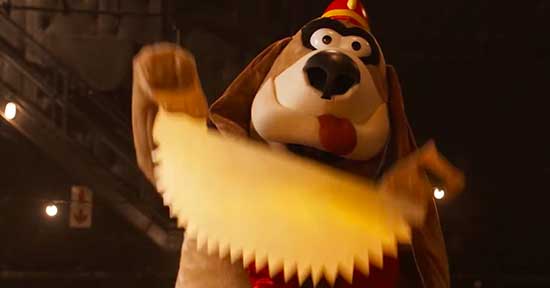 But this is where it gets weird because the Banana Splits are not costumed actors. They are automata, intelligent robots created by an engineer named Karl (Lional Newton). There is one imperative in their programming – THE SHOW MUST GO ON. Andy drops the bomb about the cancellation in the presence of Drooper, not realizing the robot heard him or understood.

So now the stage is set for the events that follow. I realize this is a lot of story for what should be a campy slash-fest. However, all of this is covered in the first 30 minutes. Like the classic Kaiju movies, the monsters are not the real story. They are the backdrop for the human drama being presented.

I also realize that there aren’t a lot of people who know about this show, or remember it perhaps, so I decided to watch it with a panel. The panel consisted of myself who grew up a huge fan, my partner who watched it in syndication but has only vague memories, and a friend who was born a decade too late to know what the heck it is. I figured this generational gap would give me a wide perspective on how the film might be viewed. 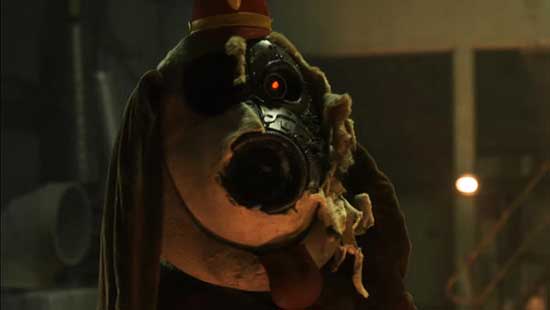 The youngest member of my panel really enjoyed it. He admits that not being familiar with the source material probably left him out of the joke a few times. He describes Harley as being like Charley Bucket from Willy Wonka – the odd little boy who goes on a surreal adventure, innocent of anything nefarious. He also says it felt very much like an indie film. He gave it a 10 out of 10.

The middle member of my panel was very surprised by the quality of the film. He loved the special effects, and felt the characters were investible.. He found the amount of story going on, as opposed to a campy gorefest, a bit surprising but thought it made for a better film than what we might have gotten otherwise. He gave it an 7 out of 10.

For me, I found I didn’t really hate it as much as I thought I might. The sets for the Banana Splits Show portion of the movie are so close to the original sets. The only thing I didn’t see was the cuckoo clock. There is a sort of “Double Dare” sequence called Sloppy Time which was not part of the original show but it has a purpose in this movie.

The costumes for the Banana Splits were very close to the originals. Not perfect, but close enough that the nostalgia was real. Mr. Bauza’s voices were dead on. His Fleegle and Drooper were perfect, although I thought Bingo was a little off.

Honestly, I don’t think the film was ever meant to be campy at all. A lot of big guns were brought in to work on it. The writing team have worked on tons of children’s shows, including many of the modern Scooby Doo movies as well as series such as Raven’s Home and RL Stine’s Haunting Hour.

All of the special effects in the movie are practical. There is one CGI-assisted effect, and all of us on the panel found it to be the weakest one in the whole film. The practical kills were creative and super good. The effects team for this movie worked on films such as Pacific Rim, Suicide Squad, Umbrella Academy, and Resident Evil:Afterlife. The work they did on this film is just as good as anything else they’ve done. 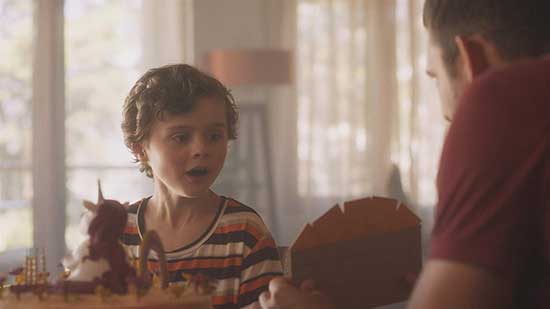 Even the classic theme song got some star treatment. At the opening of the film, we get a version performed by Jason Nesmith who is the son of Mike Nesmith, formerly of the 1960s band The Monkees.

At the closing of the film, we get another version of the theme song, this time performed by Patrick Stumph of the band Fall Out Boy. He’s been showing up in a lot of stuff like this of late, providing musicas well as voice talent for Teen Titans Go and Star vs The Forces of Evil.

The reason I decided to watch and review this film is because I’ve heard many people take a strong stand about it, either for or against. They either really loved it or really hated it. There didn’t seem to be a middle ground. It definitely wasn’t what I expected, and I’m kind of glad for that. Instead of a campy, low budget, poorly written and poorly acted gore galore attack on my childhood, I got a pretty decent film. 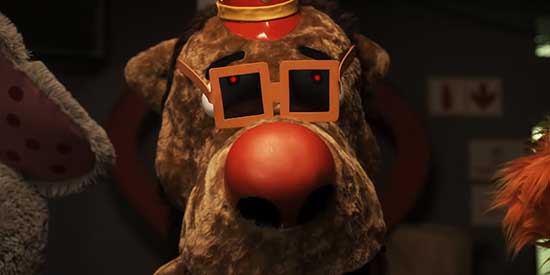 And really…it’s only an hour and a half run time so it won’t take up that much of your life to give a look.

So on a scale of one to ten, ten being awesome, I’m giving this film 8 bananas.