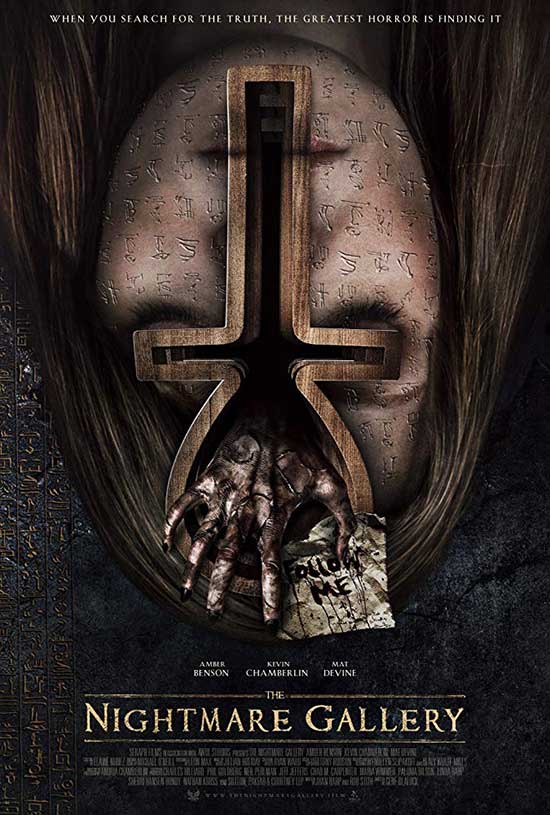 An anthropology professor’s obsession with a paranormal mystery threatens her job, marriage, and sanity as she fights to find a missing student.

Despite sounding like a new anthology entry ala Rod Serling’s seminal series Night Gallery, The Nightmare Gallery (2019) is an indie affair that tries for cerebral horror with an antiquarian touch. Despite those lofty aspirations, script missteps and failures in directing force this film from a promising setup to a dull and tired conclusion.

Helming the director’s chair is short film and television veteran Gene Blalock in his fiction-feature debut, while writing team Jhan Harp and Rob Stith (both of whom worked on the Horror Haiku series, 2017) pen the script. Amber Benson of Buffy The Vampire Slayer (series, 1999) fame takes the lead as anthropology professor Samantha Rand, with Mieko Hillman (Teen Wolf series 2013) portraying her wife, Dawn. Samantha’s old assistant Sanjay, who disappears after finding an ancient text, is played by Rahul Parikh (Counterpart series 2018), while her new assistant Chloe is played by Nichole Eberle (The Disappearance of Madison Bishop series).

Unfortunately for the seasoned cast, the script calls for what every viewer of atmospheric horror dreads to see—long, dialogue-less stretches of facial emoting. Benson is no acting slouch, yet one can only imagine Blalock’s constant haranguing to “seem more tired” or “mime you’ve got a migraine!” These types of forced actions always read as fake and turn what could be a visually pleasing mood-piece into streaming-only rubbish. The cast members strive for legitimate emotion, but are hampered by a plot that doesn’t add up and characters whose surface-level reactions don’t have logical psychological roots. Eberle comes out particularly poorly, with almost all of her scenes amounting to her looking perplexed and then stone faced in turn, as though she’s being directed to change facial expressions at the flip of a switch (which might be the case).

The plot is thin and bleeds into nonsensical by the end, with the ancient god Thoth using our hapless cast as resurrection-party guests. This doesn’t become apparent until we’ve been forced to watch Benson upset her very understanding wife and look sickly for over an hour, however, and the diety isn’t even mentioned until minutes from the climax. There are scenes that might be spooky, such as Dawn inhaling an ominous black vapor, but they literally never come up in the plot. This sort of remaining “gun on the table” problem is a recurring theme, and it serves to irritate rather than intrigue.

The visuals, for their part, are nice. The audio and picture quality is swell, too, with the unique practical and colored lighting effects applaud-worthy. The props suffer from Hot Topic-itis, however, but they’re put to minimal use, anyway (note the plaster ankh repeatedly shown for no clear reason.)

The most interesting part of the film is the final 20-or-so minutes, when Benson actually arrives at the titular location. Apparently someone’s former house in real life, the claustrophobic rooms and museum-of-oddities flavor of the Nightmare Gallery has a nice ambiance. The weird, underutilized characters in the gallery give off a strong old-school Dr. Who vibe, and it’s a shame the entire film wasn’t placed in the setting. Given interesting stimuli like those for the entire film, and there would have been less reliance on Benson’s ability to swoon convincingly.

That last fact—the choice to have a lead character that’s too sick to function—is perhaps the movie’s greatest failing. A smarter film would have shifted viewpoints when the lead becomes ill, but The Nightmare Gallery insists that it can make exhaustion interesting to watch. Spoiler alert—it can’t.

All in all, The Nightmare Gallery aimed high but is pulled down by script and direction that doesn’t understand how to handle its own creation. Perhaps it’s worth a fast-forward for those looking to set up their own budget-haunted house picture, but it’s hard to watch in its entirety regardless.