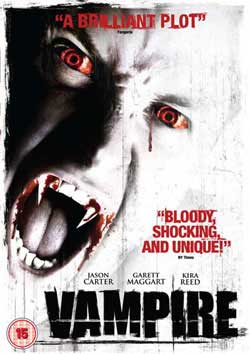 The pursuit of a serial killer leads to a deeper evil. When the government captures a vampire he is imprisoned and subjected to brutal medical experiment. With the project’s original MD dead a rookie from the clinic downstairs is brought in as a replacement. As the procedures becomes more gruesome, he is torn between sympathy for a patient’s suffering and concern for the evil that threatens to consume everyone involved.

First off, it should be noted that the film “Vampire” was originally released under the much better title “Demon Under Glass”. And since I like this title better, I will refer to the film by it. I have been pretty soured on the whole vampire movie scene lately. The whole “Twilight” phenomenon has blown it way out of proportion and just plain sick of them for now. So when I found out I had to review an extremely low budget vampire film, with that lame-ass title “Vampire”, I was less than thrilled.

I was completely taken by surprise at how interested I became in this story and the characters. This isn’t a run of the mill vampire flick, it was unique and I enjoyed the hell out of it. Now, there were plenty of silly moments and subplots that were never fully worked but there was enough here to really entertain.

Jason Carter, best known for his role as Marcus Cole on “Babylon 5”, stars as Simon Molinar, a vampire that is captured by a government group called The Delphi Project. He isn’t captured without a casualty, and the doctor who spearheaded the project, Dr. Hirsch, is killed. Once in captivity, Dr. McKay (Garett Maggart) is hired as a replacement to help conduct medical experiments and tend to Molinar, in order to learn what makes vampires tick.

At the same time, a serial killer that drains the blood of his victims, known as Vlad, is the top news and Det. Taylor (Denise Hurd) has reason to believe that Molinar is Vlad. The Delphi Project is top secret and her only lead is Dr. McKay. His superior Dr. Bassett (Jack Donner) has found out the McKay is a rare genetic match that is needed to become a vampire and feels this could be a huge benefit to the project. Choices are made and truths are revealed. This film is truly a low budget affair and it shows. I found myself laughing on numerous occasions at some unintentionally hilarious moments in the film. Unfortunately, this does hurt the film, but only a little.

Now this isn’t a film that is action oriented, or very horrifying, but meant to be more of a character study and works on that level. The sets are minimal, and mostly takes place in the single location of the government run non-existent 6th floor of the hospital. The acting was much better than expected. At first, I didn’t like Jason Carter at all and at times he over dose it a bit, but on a whole found him to be engaging and the sequences between him and the two doctors, he really shines.

It was also nice to see Harrison Young as the no-nonsense FBI head that was in charge of the project. Now Young, who also appeared in “Saving Private Ryan” and Tobe Hooper’s “Crocodile”, is from my hometown and the ex-boyfriend of a close friend of mine. And shortly before his death in 2005, we sat down and talked with him about the films he had worked on and he spoke highly of this one. The film was based on the novel “Demon Under Glass” by D.L. Warner. I’m not sure I have seen a vampire film quite like this. Director Jon Cunningham has much to learn about filmmaking but he has an eye for good
material.

I am a tiny bit excited about this movie. Maybe I will be the odd man out here since this film seems to be hated by many. I loved the story and found it to be a refreshing change of pace for what seems to be the latest trend in vampire films. Then again, this film is eight years old but that is no reason not to seek it out under either title the film was given. Despite its fault, it was an attempt at trying to be something different and succeeds.