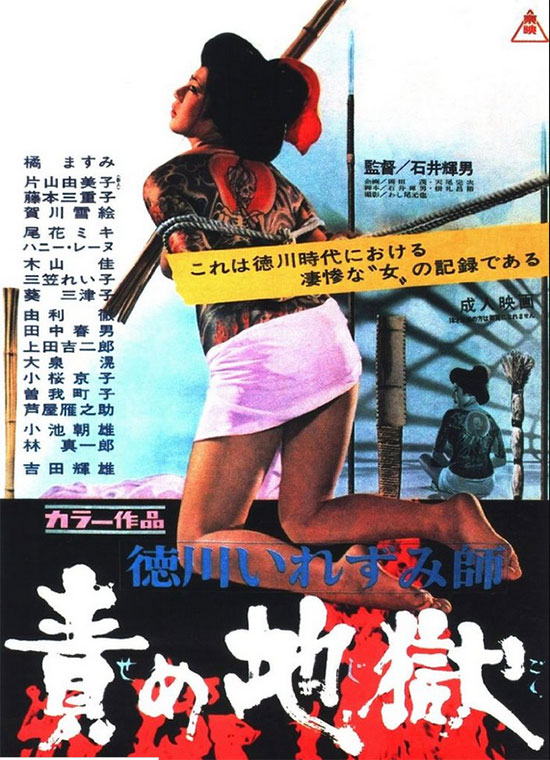 High demand for tattooed geisha generates an entire industry for their “production”. Europeans pay more for tattooed beauties. Against this background, and considering the gorgeous tattooed women develop the history of confrontation between two highly skilled masters of tattoo.

My first thought watching this movie was “Oh, this must be one of those pink films I’ve heard so much about.”

The ladies of Inferno of Torture enjoy no such vengeance–their lives are nothing but struggle and humiliation until their unceremonious deaths. The period setting gives it all a whiff of historical accuracy, which works in equal parts towards the typical romanticizing of feudal Japan and geisha culture, as well as the believability of the kinds of perversions playing out behind brothel walls. But the film seems to use this as a way to say “this is the way things were,” which may or not work as an excuse for the atrocities that follow.

The film works less as a coherent story than a series of vignettes revolving around the rivalry between two tattoo artists, Horihide (good guy) and Horitatsu (bad guy), who display their work on the backs of geishas collected from the local crooked brothel. There is a story of artistic passion and lost love hidden somewhere in there that does eventually reach its conclusion, but good luck spotting it in the haze of bare breasts and dazzling tattoos.

The tattoos range in quality from high art to rave paint, but all are a sight to behold. Many follow Japanese artistic tradition with familiar stylized figures emulating feudal-era woodcuts, while others are entirely original visions—women made of vines and two-headed peacocks are showstoppers among the flurry of beauty etched on these women’s backs. The thing is the movie can’t seem to decide if it’s more enamored with the art or the canvas. For every brief glimpse we get of intricate full back tattoos, we get twice as many leering shots of breasts…not even tattooed ones, just perky, pristine boobies staring right into the camera. Half these shots don’t even have the benefit of atmospheric music or sultry lighting, and that somehow makes it feel dirtier watching them. We are only left with the boobs and our own thoughts. We stare into the boobs, and the boobs stare back.

The hooker with the heart of gold is a familiar character in storytelling, going all the way back to Rahab and Mary Magdalane. A trope within the trope is the pure sweet flower ruined by sexual slavery must die, preferably in her true love’s arms. From La Vie Boheme to Moulin Rouge, this is a classic way to add extra tragedy to an already tragic character, and it’s usually bullshit because it implies that the prostitute is absolved of her sins through the love of a good man (often a man who has previously cursed her out over what she does for a living). Inferno seems especially fond of this trope because we get it twice in one movie! And for my money, the first one, and within the film “less important,” is the most tragic tart with a heart I’ve ever seen. (Spoilers ahead, but only for the first 30 minutes of the movie.)

Yumi acts as our ostensible main character for the first half of the film, with narration and everything. She is sold to the tattoo brothel to repay a debt, and quickly earns the ire of the madam when she catches Yumi being raped. Apparently out of some misplaced jealousy, the madam locks her up in a chastity belt, only for the rapist to eat the key. In the scuffle, the rapist is killed and buried, and the madam gets off scot free. Later, Yumi gets caught in the middle between our warring tattoo artists, when her perfect skin is heavily inked by both of them in an attempt to outdo one another.

After suffering all this abuse and more, Yumi finally makes her escape and heads for the graveyard, determined to “reclaim her womanhood.” She digs up the rapist and cuts out the key, and as she slides it into the lock, we get to watch what was left of her hopes and dreams fall apart as the key breaks inside. Just as she’s about to have a nervous breakdown, she’s swarmed by a group of guards who swiftly carry her to justice. For the crime of desecrating a grave, she is sentenced to death by fire, which would be more than enough. But these guys put the DOING IT in “overdoing it.”

Poor sweet Yumi is tied to a cross and pulled out to sea, where men dump oil into the water and light it, leaving her floating in a circle of smoke and flame. Much like Psycho, our protagonist is dead with a whole movie left to go. Very unlike Psycho, her death has no impact on the story that follows it, which in movie rules makes Yumi not matter. She is a sad, sad footnote in someone else’s story, but for me, she all the more interesting because of it. Anyway, back to the movie!

Yumi’s death is no great loss to either of the tattoo artists, despite both of them calling her their greatest work not ten minutes earlier. They move right along to fight over a different girl, but the twist here is that she’s our good guy artist’s sweetheart from back home, cranking up the passion to white hot levels. Osuzu is a wilted flower of a woman who spends much of her time longing for Hide, and somehow her simpering face drives the last half of the film. Hide learns that his lady love has been inked by his greatest enemy, and this is on par with taking her virginity (in that, Hide’s mad he didn’t get to it first). The two artists’ competition explodes into madness and bloodshed, all over the skin of an impossibly perfect woman, who (spoilers) doesn’t survive long enough to end up with either of them.

Inferno of Torture is a mess. Scenes jump back and forth in time, uneven focus is paid to characters that ultimately don’t matter, and as mentioned, the story completely changes direction at the halfway mark. It’s a scramble of different kinds of exploitation films blended together into some supernova of exploitation, with the common theme of elaborate tattoos and sad prostitutes. And I didn’t even mention Capital Punishment Island! There’s not a lick of morality to be found and not one person gets a happy ending.

And I kind of loved it. For all its technical flaws and icky moments, Inferno of Torture is enjoyable for exactly what it is: a showcase of female anatomy and tattooed skin. Is it a particularly uplifting or respectful depiction? No, it’s pervy and demented and dismally straightforward, joyless in execution despite all its ridiculous moments. That’s why I use the word “showcase” instead of “celebration.” It’s hard not to admire all the beauty onscreen, whether in the flesh or what is painted on it, but one is left longing for the movie that could have been. Maybe if Inferno had waited just another year or two for the rise of Pinky Violence–added just a little more artfulness and readjusted its morals–it could have been something truly special. As it is, it’s little more than a beautiful mess rocking some sick ink.