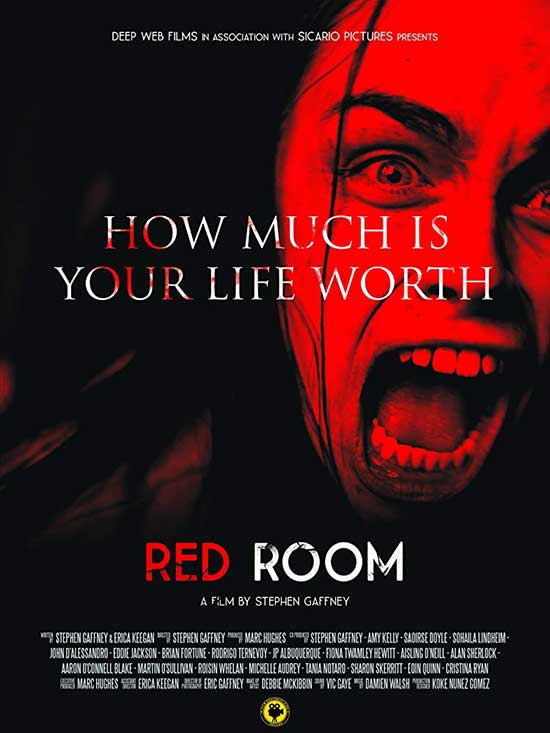 Held hostage in an isolated house, three kidnapped women attempt to escape from their sadistic captors.

Written and directed by Stephen Gaffney (Bully [2015, not the Larry Clark film], Class A) and co-written by Erica Keegan (co-writer along with Gaffney of the upcoming The Profession of Violence), 2017’s Red Room combines a familiar title with an equally familiar premise. But unlike Daisuke Yamanouchi’s 1999 movie of the same name, which asks the question, “How low would you go to win a million dollars?”, Gaffney’s film takes the Hostel (pts 1 & 2)/Live Feed approach, instead asking, “How much would you pay to watch someone else do all the dirty work?” The main difference is in the delivery: whereas the previously mentioned films build around their gore effects, Red Room (this being the Irish one, not the older Japanese one) spends a bit more time detailing the potential victims. But don’t worry, there’s still plenty of blood flowing through these set pieces.

Our story begins with Kyra (Amy Kelly), who is walking alone through a parking lot at night when she finds a ringing cell phone on the ground. Trying to be helpful, she picks it up and answers, which is exactly what her kidnappers wanted her to do, as they grab her while she’s distracted and throw her in a van. It doesn’t seem to be a targeted attack, but rather a “wrong place, wrong time” situation. When we next see her, she is tied up in a room along with two other women: Lily (Sohaila Lindheim; Class A), who’s full of anger and cynicism, and Allison (Saoirse Doyle; Don’t Forget Me, Crone Wood), who is overwhelmed with fear and has all but given up. None of the three know why they’re there, only that there are at least four men in the house, and there had been one other woman in the room before Kyra, but they took her away, and they sporadically hear her screams. Kyra is still hopeful, being the newest prisoner, and is insistent that they will find a way out by any means necessary.

As it turns out, this house is the base of operations for an underground sadistic website where men are able to bid auction-style for a chance to control the means by which women are beaten, tortured, and killed – territory that has definitely been tread upon many times before. Intercut throughout the film are scenes with various “customers” of the site, angry, apparently rich, men who log in regularly in hopes of getting their piece of the action. We see them yelling at the computers, sneaking away from their family for a glimpse at the site, and even turning down their attractive wives, instead opting to masturbate to the violence on their computer screens. Much of this subject was already featured prominently in Hostel: Part 2 10 years earlier, back in 2007, and unfortunately Red Room doesn’t bring much new material to the table. 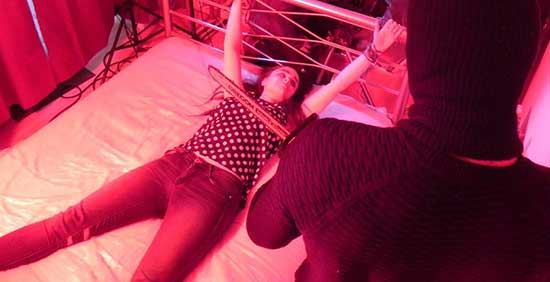 There is not a ton of gore here, but what is shown is done well by the makeup/effects team of Debbie McKibbin and Gillian Stapleton (although the sound effects that go along with some of the brutality are a bit over the top). Where Gaffney’s Red Room does excel is when it focuses on the kidnapped women. The tension is well executed, as is the character building; we get to know each of the three main women through the tense, claustrophobic stress of their captivity. There is confusion as to why they are being held there, and what is going to happen to them. There are escape attempts and the inevitable aftermath of those attempts, ultimately building into an action-packed, bloody and deadly final 15 minutes that delivers some unexpected shocks. It’s a well done, almost Reservoir Dogs-like, finale, which makes it all the more disappointing that throughout the film, random flashback scenes are thrown in that derail the pace and often times feel confusing and even pointless. We don’t need the backstory of why Kyra was in that parking lot in the opening minutes, nor does the flashback add anything to the overall story. And it is staggered across bits of the film, so it not only takes us out of the story momentarily, but it continues to do so multiple times. Combined with the random cuts to the website bidders, often just simple static shots of dudes looking at their computer screens, muttering insults or frantically masturbating, Red Room ends up its own worst enemy – every time it gets going, it cuts away to filler and loses steam.

Gaffney’s “women in captivity” film is not at all a poorly made film. In fact, I appreciate that it focuses on the tension rather than the torture; I think that is its biggest strength. But it does get caught up in the small stuff, and that ends up impeding its momentum. The acting is decent, the story is decent, the look of the film is decent, and the tension is well created. I’ve definitely seen much, much worse, but I really feel like Red Room could have been so much better without the handful of poor editing choices. All of this to say, if you’re a die-hard horror fan, give this one a shot, and by all means, keep an eye out for the future work of Stephen Gaffney.