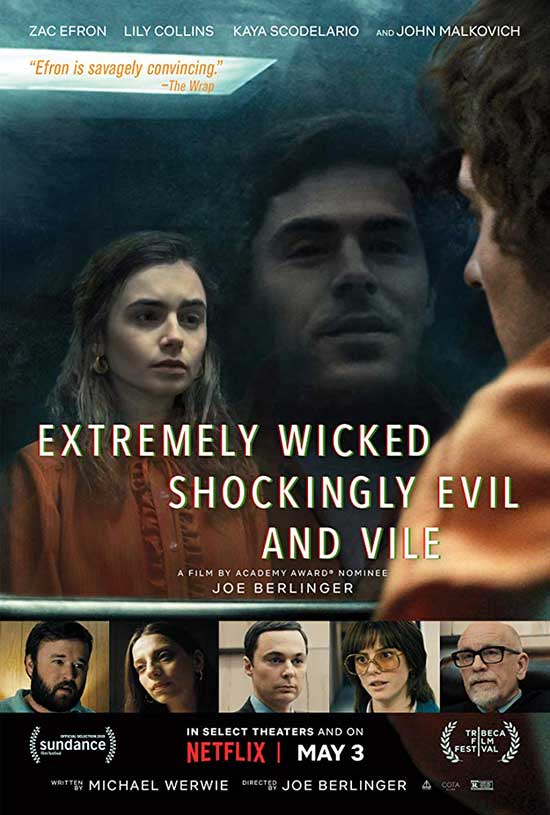 A courtroom frenzy ensues and sweeps 1970s America when a young single mother reluctantly tips the attention of a widespread manhunt toward her longtime boyfriend, Ted Bundy.

This long-awaited film, starring Efron as serial killer Ted Bundy, dropped on US Netflix streaming on May 3. It’s based on the 1981 book The Phantom Prince: My Life With Ted Bundy, a long out-of-print memoir written by Elizabeth Kendall/Kloepfer, who was Bundy’s girlfriend for several years during the height of his killing sprees.

Director Berlinger (Cold Blooded: The Clutter Family Murders) also helmed and produced the buzz-generating, four-part miniseries Conversations With a Killer: The Ted Bundy Tapes, which is also playing currently on Netflix. The unwieldy title of the film comes from comments made by the Florida judge who sentenced Bundy to death.

At first glance, the casting of a squeaky-clean, former Disney teen idol as Terrible Ted seems absurd; for one thing, Efron doesn’t normally look anything like Bundy. However, with his straight hair curled and styled like Bundy’s, and his eyebrows groomed similarly, Efron does indeed resemble the killer remarkably from certain angles.

Efron also does a good job of copying Bundy’s facial expressions and mannerisms, with a notable exception: he never really gets a handle on the dark, demonic stare that Bundy made whenever he was feeling especially psychotic. (Look up photos of Bundy and you’ll see what I mean.)

The film starts with Elizabeth Kendall (Lily Collins) visiting Bundy on Death Row in a Florida prison, just before his execution. It then goes into flashback mode, to the night that Kendall, a single mother in her early 20s, first meets Bundy in a bar in Seattle in 1969. They develop a long-term relationship, with Ted acting as a surrogate father to Kendall’s tiny daughter, Molly. Everything seems blissful until a killing spree starts up in the Seattle area in 1974. Young women, mostly college students, are disappearing, with their mutilated remains found dumped in the woods in various parts of Washington State. 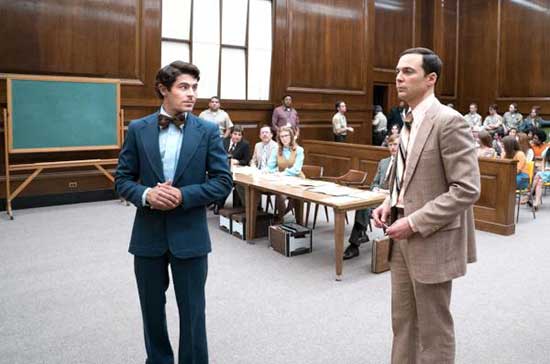 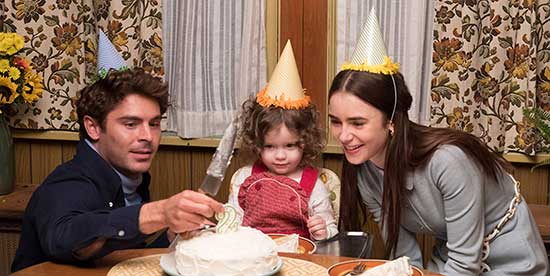 These murders acquire the nickname of the “Ted Murders,” because witnesses have seen some of the victims talking to a man who identified himself with that name. Witnesses have also described this “Ted” as driving a tan Volkswagen Beetle.

The car and vague descriptions match Kendall’s boyfriend, and she surreptitiously reports him as a suspect to the Seattle police. However, Bundy is cleared because witnesses can’t identify him, and he moves to Utah to attend law school. There, he is stopped for speeding and a cop finds burglary/kidnapping tools in his car. This eventually leads to the unraveling of Bundy’s career as a serial killer, which ends in Florida in 1979, after he escapes from a Colorado prison and is charged with killing three girls in the Gainesville area, including a 12-year-old child.

All told, Bundy admitted to killing 30 women before his execution in 1989, although he is suspected of killing many more. He confessed to slaughtering women/girls in Washington, Oregon, Idaho, Colorado, Utah, Florida, and California. 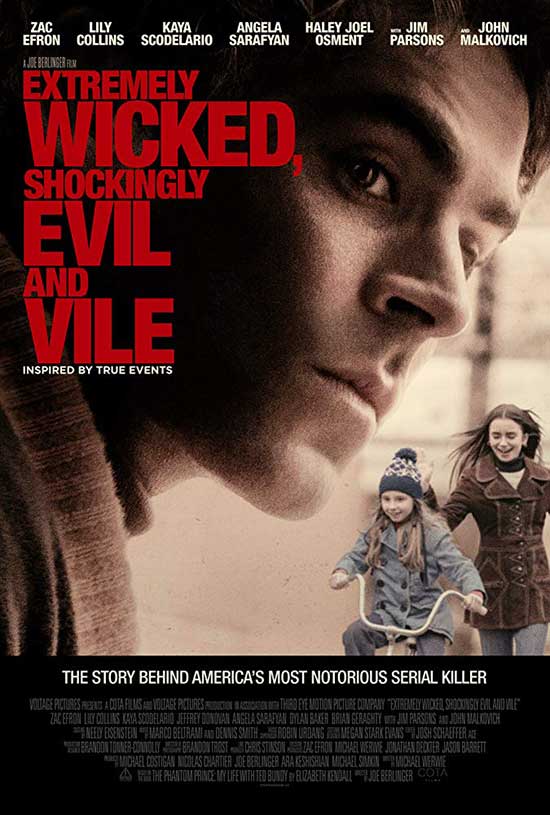 His main trial in Florida, under a judge played by John Malkovich (in his usual entertaining style), forms the bulk of the latter part of the film. We see Bundy acting as his own lawyer and using a legal loophole to marry another girlfriend, Carol Ann Boone, during a court session (all true).

The film then loops back to the beginning, with Kendall visiting Bundy as he awaits execution. She tries to get him to provide details about a particularly disturbing police photo of a decapitated woman’s body. This is a chilling scene, but it’s really the only one which depicts one of the murders; this is not a film for those who want to see lots of gruesome scenes of Bundy’s atrocities.

Extremely Wicked is well-paced, well-acted, and well-directed. The interiors, clothes, cars, music, and other period details are spot on. (I especially appreciated the accurate depiction of how fashions changed radically from the early 70s to the late 70s; most films about this era get this very wrong.) In the end, however, Extremely Wicked only shows us a surface Bundy and doesn’t reveal any perspectives about how or why he became what he was. I’ve seen all of the other major Bundy portrayals available, from Mark Harmon to Michael Reilly Burke, and those films, although of varying focus and quality, always have at least one scene that makes the viewer think, “damn, Bundy really is an evil bastard.”

In this film, that scene is missing. Even the chilling details of the decapitation confessed to Kendall at the end don’t really qualify; for one thing, that confession didn’t actually happen in real life.

The contrast between Efron’s boy-next-door portrayal of Bundy and the real Bundy is made crystal clear by the historical footage of Terrible Ted that is played during the ending credits. In that footage, the demonic affect that the real Ted projected so often is fully visible and utterly creepy.

IMDb reviewers have this film rated currently as 6.7 out of 10, which I feel is about right. It’s a decent addition to the Bundy cannon, but others are better and more expansive; in particular, the Mark Harmon miniseries The Deliberate Stranger (1986), directed by Marvin Chomsky, is still the definitive onscreen portrayal of the Bundy story.