Now that former Disney teen idol  Zac Efron has been cast as serial killer extraordinaire Ted Bundy in an upcoming film called Extremely Wicked, Shockingly Evil and Vile, it’s a good time look back at the actors who’ve already been there with Terrible Ted. In chronological order, they are:

Mark Harmon in THE DELIBERATE STRANGER (1986), a TV miniseries, directed by Marvin Chomsky,  based on the book Bundy, The Deliberate Stranger, by Richard Larsen—a Seattle reporter who knew Bundy before he was exposed as a killer. This two-part, prime-time miniseries, more than three hours long, enthralled the U. S. when it aired on NBC in the mid-Eighties, although it may seem a bit stodgy by today’s standards.

Most of the murders take place off-screen; the names of the victims have all been changed; there’s little hint of Bundy’s necrophilia and deviant sexual practices. (To be fair, most of  that information was only made public when Bundy confessed to many of his crimes just before his execution in1989, three years after this series aired). At first it seems that Harmon, at the height of his Eighties heartthrob status, is far too likeable and handsome to play Bundy, but his performance sneaks up on the viewer, and by the end of series, most will be heartily sick of his character’s endless lying and facile, shit-eating grin. Chomsky helms it all with a sure hand; he also directed Steve Railsback as Charles Manson in the equally fascinating miniseries HELTER SKELTER (1976). On disc. 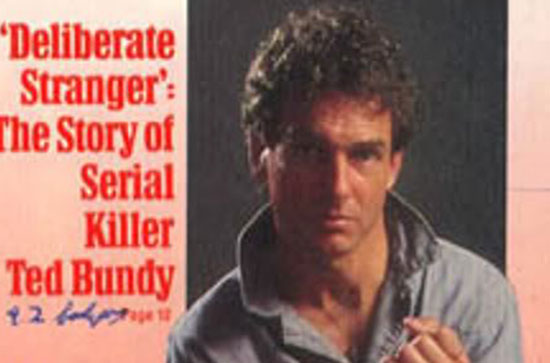 Michael Riley Bourke in TED BUNDY (2002), a feature film directed by Matthew Bright. This movie crosses the line from a murder mystery/police procedural to a full-on horror/slasher film. In fact, some would call it an exploitation film, if they wanted to be brutally honest. It focuses mainly on Bundy’s horrible crimes, interspersed with a slim story-line covering his relationships with his long-time girlfriend Elizabeth Kendall and later, his wife Carol Anne Boone (the names were changed for the movie). There’s little police work depicted and nothing about Bundy’s friendships with prominent Washington state politicians, the celebrated crime writer Ann Rule (see below), or journalist Dick Larsen. Bourke’s portrayal of  Bundy is very much contra the conventional view.

He’s no longer the handsome sociopath who fooled numerous people with his looks and charm; he’s instead a flabby, slobby pervert, a Peeping Tom, and a petty thief with really weird sexual deviancies. It’s tough to see how this version of Bundy could charm so many young women into their fatal undoing, a fact that undercuts the believability of the film. Primarily a television actor, Bourke does a decent job with the script material as far as it goes, but parts of TED BUNDY are so gross and exploitive that most viewers will probably feel like taking a shower afterward. Plus, it gets the color of Bundy’s infamous beige Volkswagen Beetle wrong, depicting it in a ridiculous canary yellow. On disc and streaming. 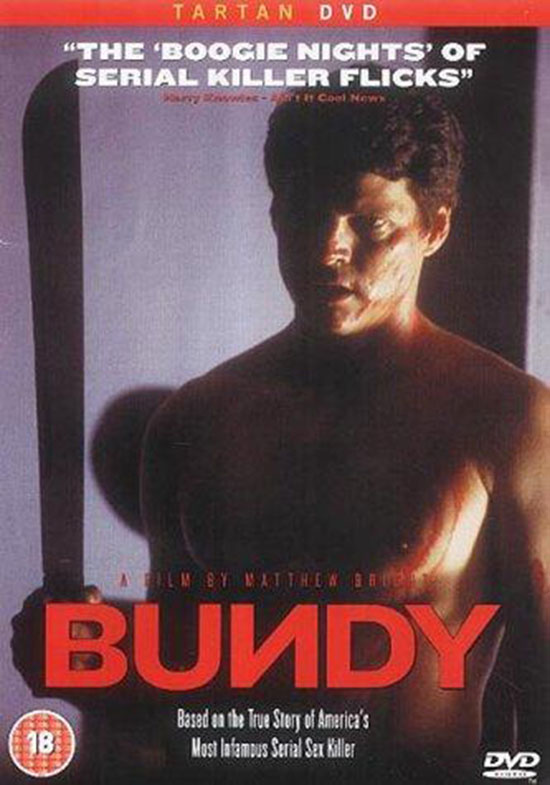 Billy Campbell in ANN RULE PRESENTS THE STRANGER BESIDE ME (2003), a TV movie directed by Paul Shapiro that premiered on USA cable channel, based on the true crime novel of the same title by Ann Rule. This film attempts to tell the sprawling tale of crime writer Ann Rule’s multi-decade relationship with Bundy, but at ninety minutes, it’s not long enough to do justice to her fascinating book, which deserves a miniseries just as much as Dick Larsen’s Deliberate Stranger. Of all the Bundy portrayals listed here, Campbell, who gained fame in the Eighties as THE ROCKETEER, looks the most like the real Bundy.

He’s neither too handsome, like Mark Harmon, nor too plain, like Michael Riley Bourke. He does a fairly good job of portraying the chilling sociopath behind the attractive mask. However, those viewers familiar with the case will probably balk at some of the inexplicable changes to the story, such as giving Bundy a flaming red Beetle while he was  living in Seattle (it was beige, dammit!) Also changed: a scene where Bundy fakes a broken arm to gain sympathy from his victims actually occurred at a lake resort, not in the parking lot of a toney racquetball club. It’s a decent effort for a TV movie, but there’s nothing special about it except for Barbara Hershey’s steely performance as Ann Rule. On disc and streaming. 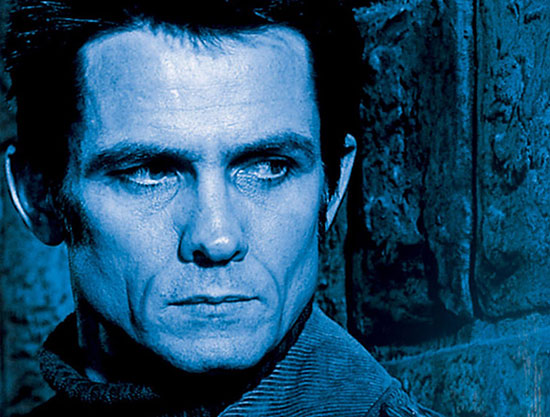 Cary Elwes in THE RIVERMAN (2004), a TV movie directed by Bill Eagles, based on the book The Riverman: Ted Bundy and I Hunt for the Green River Killer,  by Robert Keppel. One of the more bizarre aspects of the Bundy case occurred when the killer’s old nemesis from  Seattle, Detective Robert “Bob” Keppel, consulted with Bundy, while on Death Row, for his insights into another Seattle-area serial murder case.

This case involved Gary Ridgway, a man dubbed “The Green River Killer” by the media, who eventually confessed to killing even more women than Bundy. Yes, Ted Bundy once played Hannibal Lector to Keppel’s Clarice Starling. This film, which debuted on the A&E cable channel, relates the intertwined stories of Keppel, Bundy and Gary Ridgway. (Keppel’s actual goal was to tease information about Bundy’s Seattle-area crimes out of the killer while pretending to be interested in his views about Ridgway.) Bundy toys with Keppel—played by Bruce Greenwood, famous for portraying JFK and JFK-like presidents numerous times— while hoping to spin out his time on Death Row by promising the desired information. While Keppel and Bundy play-cat-and-mouse, super-creepy flashbacks depict various murders of Ridgway and Bundy. Elwes, who was immortalized as Wesley in THE PRINCESS BRIDE, turns in a riveting performance, but it’s not really Bundy on the screen; it’s a variation on Lector. Elwes even drops into his native British accent now and then. Still, it’s an engrossing film and a big cut above the usual A&E fare. On disc and streaming. 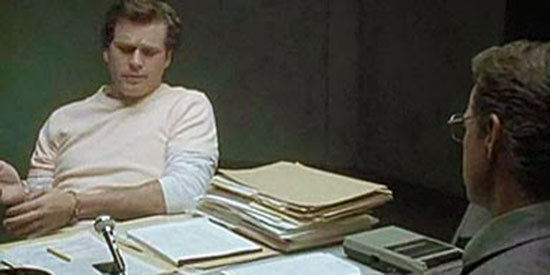 Corin Nemec in TED BUNDY: AN AMERICAN ICON (2008), written and directed by Michael Feifer. Nemec, who starred in the quirky Nineties teen sitcom PARKER LEWIS CANT LOSE, turns in a surprisingly credible performance as Bundy in this low-budget, straight-to-video film. He gets the hair, mod Seventies clothes, vocal affect and demeanor just right, and also conveys very well the deep insecurity which Ann Rule said she sensed beneath Bundy’s boyish charm and brash confidence. Unfortunately, Nemec’s performance totally outclasses the chaotic script, which jumps around confusingly and is riddled with errors.

The film is only ninety minutes, but seems to drag on forever; it also leaves out big chunks of the story, including Bundy’s relationship with Elizabeth Kendall and his marriage to Carol Anne Boone. Plus, this one doesn’t get the car color right, either. It does deliver some chills and creep-outs a few (very few)  times, but it’s watchable mainly for Nemec’s performance. For a fairly thorough accounting of events (and the correct color of the car!) watch THE DELIBERATE STRANGER. On disc and streaming. 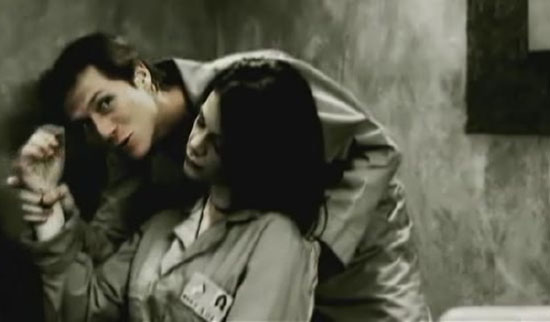 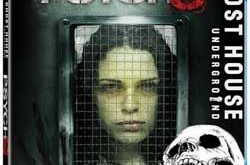