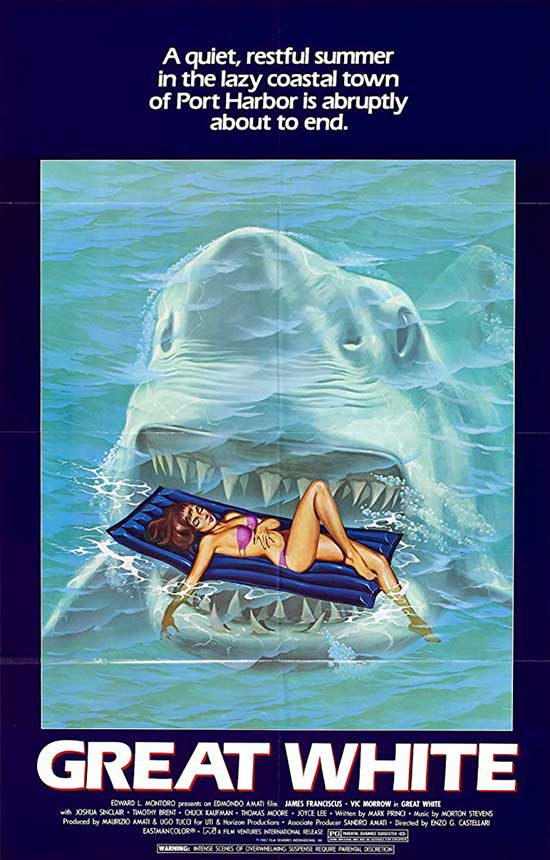 James Franciscus tries to save hundreds of swimmers in a coastal resort after a Great White Shark starts terrorizing the area.

You have to hand it to the Italian movie industry, particularly of the 1980s: it was never afraid to shamelessly rip off other movies or pass their own film off as a sequel to a popular franchise. Their audacity to blatantly steal from other movies has always amazed me, but the fact that they got away with it is even more impressive. I’m guessing copyright laws in Europe is different enough that it allowed Italian production companies to avoid getting the pants sued off of them by American filmmakers. I bring this up because the film that is the subject of this review, Great White, couldn’t have been more obvious in ripping off Steven Spielberg’s Jaws if it called it Great White: The Jawsening. 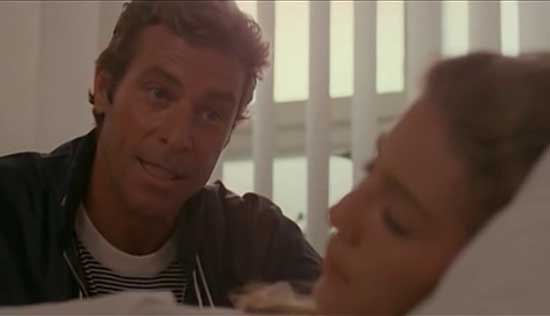 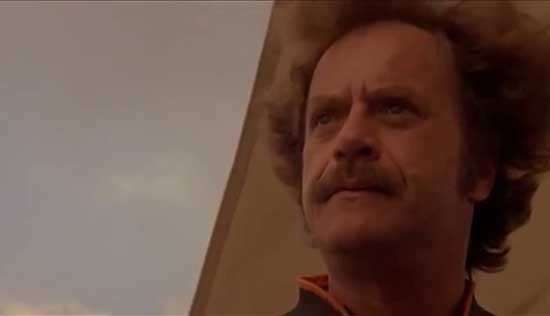 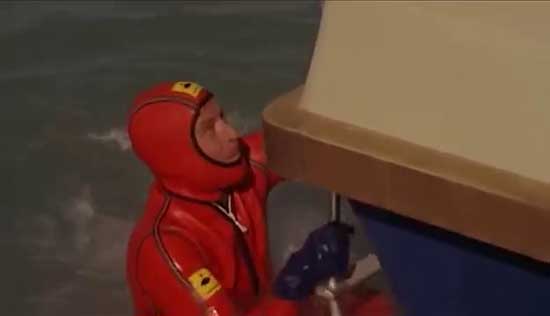 Great White centers on what happens when a great white shark decides that the humans that keep playing in the water near the seaside town called Port Harbor are too tasty to pass up. After dining on a windsurfer, an author and his buddy shark hunter figure out what’s going on. However, the state’s governor doesn’t listen because he’s is hesitant to cancel the big windsurfing shindig for fear doing so would hurt his chances at reelection. (He apparently never considered a shark eating a bunch of people during the event would be a worse thing for his political career). When things inevitably go wrong during the windsurfing deal, the author and his buddy try to kill the shark once and for all.

Anyone remotely familiar with the legendary movie Jaws should be rolling their eyes anytime someone describes Great White to them. It has the politician that doesn’t want to believe that there is a danger because he’s afraid of the blowback if he canceled the upcoming special event. You have a grizzled fellow from the U.K. who happens to be a shark hunter. The only thing that seems different is the main character is a horror author instead of the local sheriff. However, his name happens to be Peter Benton, and there is no way that his moniker isn’t a riff on Peter Benchley (the author of Jaws). There is almost nothing original to be found here. It adheres to the same plot beats as the movie it so proudly steals from that nothing is going to surprise you unless you’re one of the few people that has never seen Jaws. 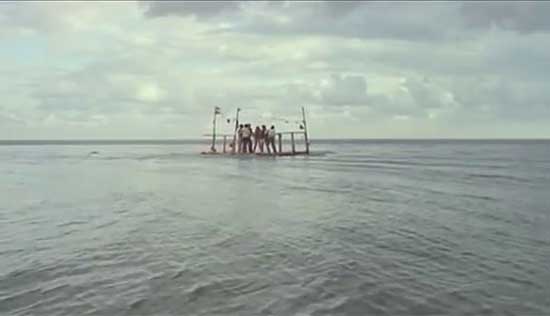 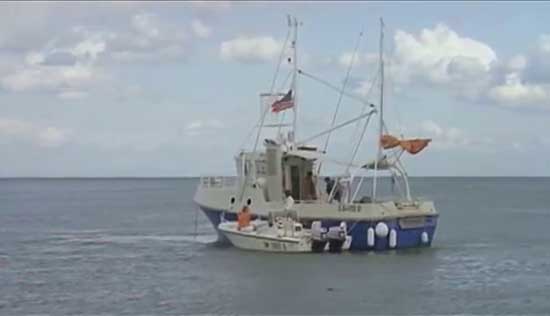 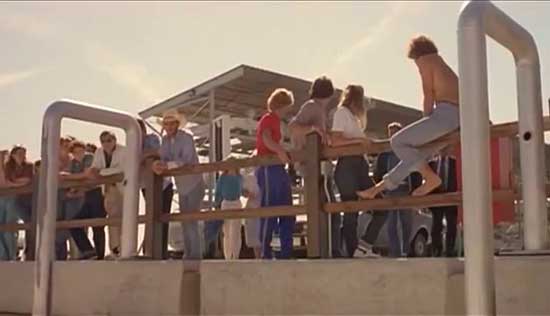 I was hoping that the filmmakers would have at least gone over the top with gore. I noticed that was not an uncommon thing in some of the rip-off flicks the Italians have made over the years. It was like they were compensating by trying to add that extra bit of ultraviolence to try to set their product apart. Sadly, Great White didn’t quite go that route. Don’t get me wrong, it did provide a bit more graphic violence than Jaws did, and that was at least a little different. However, I would have been nice if they turned that gore dial up to “11” and went completely nuts with it. That’s not to say that what they did have wasn’t entertaining. Seeing a dude’s legs get bitten off in gruesome detail was actually pretty cool. 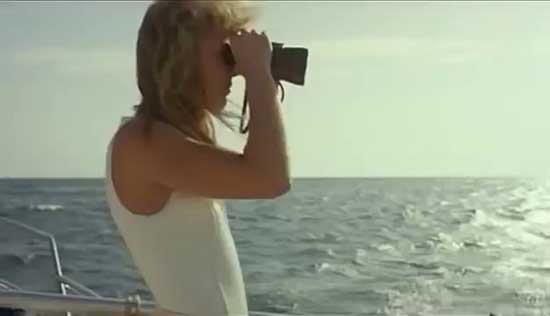 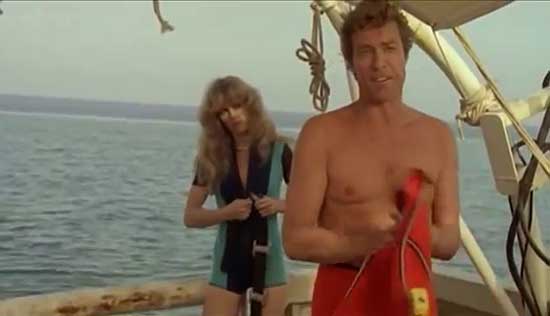 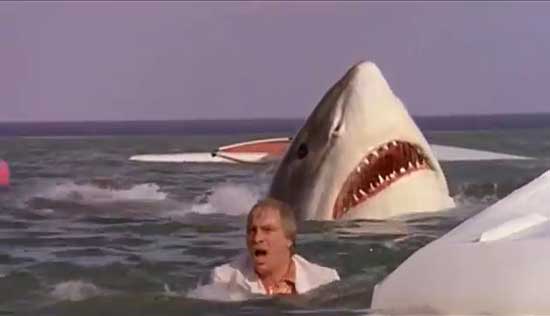 Like a lot of low budget Italian films of the era, the acting is generally pretty bad. This may be due to the fact that some of the actors are Italians that are being dubbed in English, which may make them seem worse than they are. For the most part, the English speaking actors are fairly decent, though, with the exception being Vic Morrow as the shark hunter. He seemed to be phoning it in here, giving a fairly lifeless performance. His body language seemed to scream “I’m only here for the paycheck”. He had the chance to elevate the material he’s given if he’d cared enough to, and it would have been nice if he at least tried. He was one of the biggest disappointments to the movie, and it’s was kind of sad. 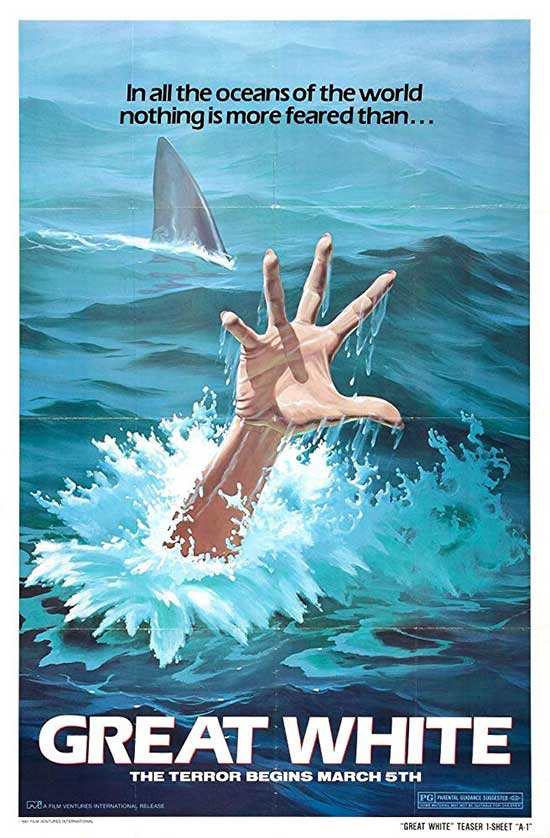 Great White isn’t a terrible movie, but it isn’t a particularly good one either. It’s derivative to a fault and doesn’t offer anything new to the killer shark genre. The only fun thing about it is when we get to witness the shark’s carnage, but those moments art too few and far between. There’s not a lot here that’s worth anyone’s time, no matter how hard up a person is to see another film about a shark eating people.