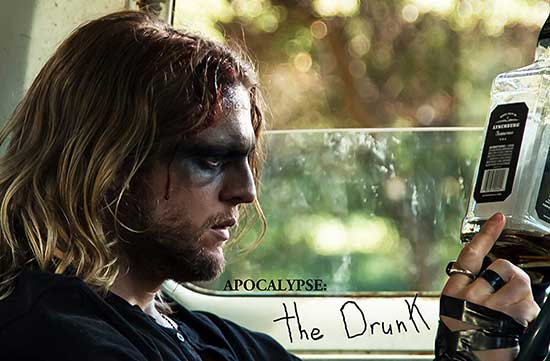 A Rock and Roll singer wakes up after The Rapture and not only can’t remember what happened, is afraid of what’s outside.

Apocalypse the drunk a 2016 short film directed by Ryan McCoy opens out mind to new possibilities. This film runs under 7 minutes and takes place with the only character stranded in an old broken down truck. The main character is played by Chase Coleman who is stranded in some sort of apocalypse.

Given that a dead body is in front of the truck and it resembles a zombie its most likely a zombie apocalypse. Our main character sets alone for several days in his truck. He appears to be injured and has a goth presents to him black taped hands face paint the basic stereo type. Through several days he smokes cigarettes and drinks beer and whiskey. When he runs out of alcohol he gets more anxious. 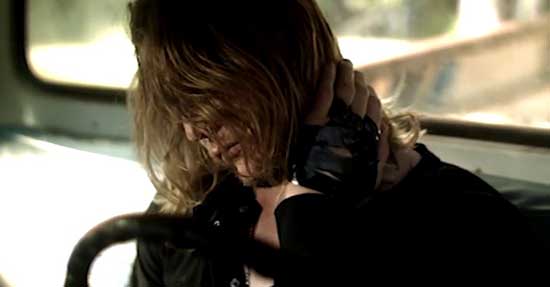 Eventually our lead becomes bored out of his mind, armed with only a small hatchet he hears moaning sounds on the outside of his truck during the night. Our alcoholic hero runs out of alcohol.  In a moment of desperation our survivor forces down a whole bottle of mouth wash. Makes my stomach turn just thinking about it. This brings a unique side to the zombie genre. Addicts how do they recover or survive in a zombie infested world? How about diabetics or narcoleptics. With a dwindling supply of medication and alcohol the struggles of these people make for interesting subject rarely exploited on screen. The film leaves us with the mouth wash drinker startled awake in the night by the moaning sounds he has experienced prior. This time he leaves the vehicle to investigate armed with his trusty blood stained hatched and a lighter.

Apocalypse the drunk is well done on a small budget and with no dialogue. Id love to see more from Ryan McCoy. This could be a great beginning for a fun interesting movie with tons of potential. Who doesn’t like an alcoholic anti-hero? I know I’ve always had a soft spot for them. This is more in the line of Walking dead’s Red Machete a tease of individual experiences in apocalyptic setting.