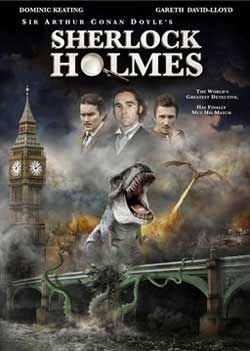 When a mob of massive monsters invades London, only master sleuth Sherlock Holmes (Ben Syder) and his associate Dr. Watson (Gareth David-Lloyd) can save the city. Watson begins to believe that the creatures exist, but Holmes thinks villain Spring-Heeled Jack (Dominic Keating) is behind the attacks. Now, they must track down the master criminal before his plan for world domination comes to fruition in this action-packed mystery.

I have never been a Sherlock Holmes fan. I don’t really know much about the characters’ history other than his right hand man is Dr. Watson and that the characters were created by Sir Arthur Conan Doyle. I may know the names of a couple of stories but I have personally never been that interested.

Though I have yet to see the Guy Ritchie and Robert Downey Jr. collaboration, I was given “Sir Arthur Conan Doyle’s Sherlock Holmes” released by The Asylum, who are notorious for releasing their films to DVD, similar in name and theme, to coincide with the release of major studio pictures. “Sherlock Holmes” is their latest entry in their attempt to cash in. The funny thing, is that the film really isn’t half bad. It’s not without flaws but you could do worse on a boring afternoon.

The film opens with an aged Dr. Watson telling a story about him and Sherlock Holmes that had been kept a secret, a story so fantastic that it is hard to believe. A boat of seamen are terrorized by a giant sea creature and the people of London are attacked by a dinosaur, these events lead Holmes and Watson on a search for an explanation and the twisted mind behind the madness. I really don’t know much about The Asylum, from what I am told the films are subpar and the acting not so good. I honestly feel that the acting here is what elevated the film. Newcomer Ben Snyder plays Sherlock with just the right amount of humor and humanity to help sell the story. Torchwood’s Gareth David-Lloyd plays Dr. John Watson with intelligence and a pinch of the bumbling sidekick thrown in for good measure. Their friendship is brotherly and their banter, when not doing their detective work, is rather funny. There is defiantly a chemistry between the two actors that makes their friendship believable.

Dominic Keating of Star Trek: Enterprise is Spring-Heeled Jack, the films villain. At points in the film, he goes a bit overboard in the over acting category but still managed to be convincing and a formidable foe for Holmes and Watson. Now, having never read a Sherlock Holmes story, I have no idea how far into fantasy they ever ventured but I am pretty confident that Conan Doyle never enlisted the aid of monstrous sea creatures and dinosaurs.

It may have been a bit silly but screenwriter Paul Bales managed to keep the integrity of the characters in tack while creating a fantasy film that combined action and mystery in equal doses, easily better than the average SyFy made for cable film. I was even surprised a bit by the CG in the film. Some, not all, looked really convincing. London had a unique look and director Rachel Goldenberg has an eye for what she wants. The staging of the scenes, the editing, etc. seemed to move the film along at just the right pace as not to feel rushed and never felt overly long. I am sure it helped Goldenberg being a production assistant on James Cameron’s blockbuster Avatar. My only major complaint was the musical score. It just sort of droned on, was hoping a bit for some sort of heroic theme and was let down.

I am not saying you should rush out and grab this from the shelf. Not everyone is going to enjoy this but when I watched the film, it was freezing outside and snowing. It really helped to pass the time and it achieved its goal of being fluff entertainment. I wasn’t expecting to be entertained, I was actually dreading this film, I did not want to watch it but was pleasantly surprised that I had a good time with it. The film may have had a budget smaller than an episode of a cheap television series, but what they did have to spend they put it where it counts and made a fun little film. 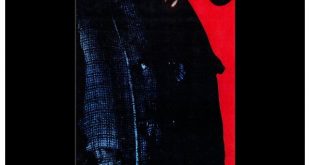 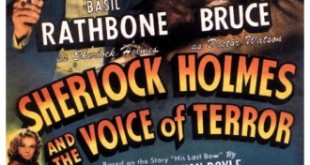 Film Review: Sherlock Holmes And The Voice Of Terror (1942)