Home | Film Review: Sherlock Holmes And The Voice Of Terror (1942)

Film Review: Sherlock Holmes And The Voice Of Terror (1942)

SYNOPSIS:
“When Nazi saboteurs jeeringly predict to the nation of new depredations via their radio Voice of Terror, the Intelligence Inner Council summons Sherlock Holmes (Basil Rathbone) to help in the crisis. Holmes and his companion, Doctor Watson (Nigel Bruce), are visited the first night of their investigation – a man falls dying from a knife wound on their doorstep. His last word leads Holmes into the slums where he encounters Kitty (Evelyn Ankers), the sweetheart of the slain man.” (courtesy IMDB)

REVIEW:
Some of our younger readers may consider the current spate of sequels, prequels, reboots and re-imaginations as a relatively recent phenomenon, but the truth is it’s more like a Hollywood tradition. For instance, the quality and popularity of The Hound Of The Baskervilles (1939) and The Adventures Of Sherlock Holmes (1939) starring Basil Rathbone and Nigel Bruce was such that under ordinary circumstances a franchise would be a foregone conclusion but, by the end of 1939, the Second World War had broken out and foreign agents and spies were much more typical and topical than the antiquated criminal activities of Moriarty and his ilk. 20th Century Fox studios saw the Holmes series as too dubious a commercial proposition to continue on the same level of high-budget production and too difficult to relegate to their B-grade film series, so Fox dropped Sherlock Holmes like a hot rock. 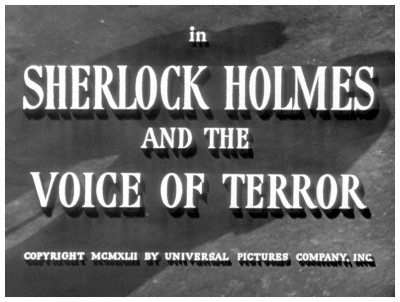 In 1942 Universal Pictures acquired the screen rights from the estate of author Arthur Conan Doyle and immediately put Rathbone and Bruce under contract for a dozen Holmes films, thus one studio was continuing a franchise originated by another using the same lead actors. At Universal, Holmes was re-imagined as a contemporary figure, allowing him to be placed into stories involving the then-topical World War. The updating also eliminated any budget problems concerning period sets and costumes which had been rather lavish in the Fox films. At first there was an outcry against this modern Holmes from the purists, even though Universal explained the change with an opening title about the character being timeless. In all fairness it’s unlikely that the franchise would have pleased the creator of the world’s greatest detective but, although the settings were contemporary (swapping the hansom cab for the automobile, plots that had nothing in common with the originals), the performances and dialogue definitely remained in character.

Some of the Holmes props were kept, like his pipe and violin, but the famous fore-and-aft deerstalker hat was dispensed with. In the first film of this new series, Sherlock Holmes And The Voice Of Terror (1942), Holmes is about to don his anachronistic headgear when Watson waggles his finger at him (“Holmes, you promised!”) and the detective puts a fedora on his head instead. Nigel Bruce carried on with his bumbling portrayal of Doctor Watson, appearing to better effect without the dyed hair and moustache he had in the Fox films. Mary Gordon appeared again as Mrs Hudson – she never did very much but she was always there (“Now sir, cheer up, what cannot be cured must be endured.”). 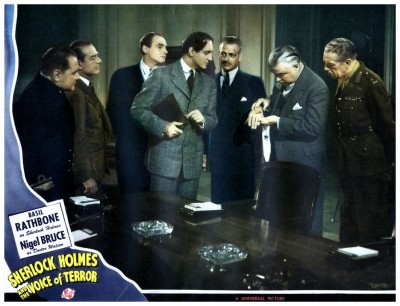 The Universal franchise has received some harsh words from critics and film historians, who have accused the films of being shoddy productions with Rathbone hamming it up in the role of Holmes. It’s true to say that the films are far from being works of art, but this is something they never set out to be. Their aim was to simply to be entertaining B-grade pictures and certainly this modest ambition was realised. As to Rathbone’s acting, he certainly treated the role flamboyantly and, as the series wore on, he did tend to overact as a reaction to the boredom of playing the same character but, after all, Holmes was a very singular and flamboyant character. In fact one character actually refers to the detective as being unorthodox and theatrical. The series, despite its many shortcomings, was highly enjoyable and had a fine panache which many B-grade thrillers of the same period lacked.

Sherlock Holmes And The Voice Of Terror was the initial offering, with Holmes being asked by Sir Evan Barham (Reginald Denny) of the Inner Council (the government’s secret defence committee) for help in putting an end to Nazi saboteurs operating in Britain, as well as uncovering the person behind a series of frightening radio broadcasts in which acts of aggression such as train crashes and warehouse fires are foretold by one who identifies himself as the Voice Of Terror. On Holmes first visit to the Council’s chambers, he exhibits his skill of deduction by observing that one of the council members, Admiral French (Arthur Stenning), objects strongly to his being called in. When asked how he could possibly know this, Holmes replies: “From the carpet. A man who rises from his chair and digs his heels sternly into the carpet is violently opposed to something and the Admiral, being quite distressed by the criticism of the press concerning the Council’s handling of the Voice Of Terror, would be most apt to resent my intrusion.” 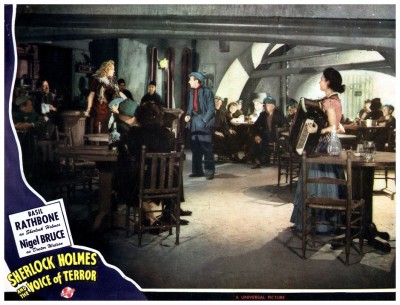 Later, when a knifed corpse is dumped on his doorstep, Holmes gets another opportunity to exercise his skill by pointing out to Watson that the knife was thrown by the tip from a distance of about fifty feet by a man about five foot ten. “How can you know that?” asks the incredulous Watson. “Elementary – no fingerprints. As for the distance and the man’s height – the angle of entry and the force with which it penetrated the victim.” The corpse leads Holmes and Watson into the dark and sinister alleys of Limehouse, and eventually to a bombed hill-top church. It’s within this large structure that Holmes foils the Nazi invasion bid and reveals that the Voice Of Terror is none other than the head of the Inner Council, Sir Evan Barham. Holmes then gives a rather incredible explanation of how a member of the British peerage came to be a Nazi spy:

“You see, Sir Evan Barham is not Sir Evan Barham. In March 1918 Lieutenant Evan Barham was a prisoner in a German prisoner-of-war camp. There, his amazing resemblance to a certain Heinrich Von Bork, a brilliant young member of the German secret service, sealed young Barham’s fate. One morning he was taken out and shot, murdered in cold blood. Barham had no immediate family. The details of his private life were avidly studied by Von Bork who was three years at Oxford and had a perfect knowledge of the English language and English habits. So, with possibly the help of a little plastic surgery, not forgetting the considerable resemblance to Barham in the first place, the deception was carried through. The real Sir Evan carried a scar from childhood – this one is only twenty years old. A detail, but significant.”

The film ends with Holmes and Watson standing in the bombed church watching the dawn coming up over the English Channel with Holmes reciting a patriotic little homily, a device which was to become a feature in most of the films. The dialogue in this instance was lifted straight from Arthur Conan Doyle‘s story His Last Bow: “Good old Watson, the one fixed point in a changing age. But there’s an East wind coming all the same. Such a wind as never blew on England yet. It will be cold and bitter, Watson, and a good many of us may wither before its blast. But it’s God’s own wind nonetheless, and a greener, better, stronger land will be in the sunshine when the storm is cleared.”

Beautifully spoken, with Rathbone’s voice getting full strength out of the flow of words, it’s a moment which never fails to stir. Here is the quintessence of Holmes and Watson. Optimistic Watson, easy-going, bluntly honest and devotedly loyal. Eccentric Holmes, capricious, full of unexpected humours and odd enthusiasms, neurotic but with a powerful sense of right and wrong. Friends forever, despite the opposite paths of their personalities. And so ends the first rather pleasing entry in the Universal series. Some footage depicting control switches being moved to effect a train wreck was lifted from Universal’s The Invisible Man (1933) and the impressive bombed church set was used two years later in The Mummy’s Curse (1944). The second film in the series, Sherlock Holmes And The Secret Weapon (1942), utilised the detective’s propensity for using disguises by presenting Rathbone as a Swiss inventor, an Indian seaman and a geriatric bookseller (“I have some works by an old German writer, Wilhelm Shakespeare…”) but that’s another story for another time. At this point I’d like to profusely thank author and detective historian Paul W. Fairman for his assistance in researching this article, and now, having demonstrated to you the perils of probing the dark depths of Hollywood, I’ll vanish into the night, after first inviting you to rendezvous with me at the same time next week when I’ll discuss another dubious treasure for…Horror News! Toodles!

Sherlock Holmes And The Voice Of Terror (1942)