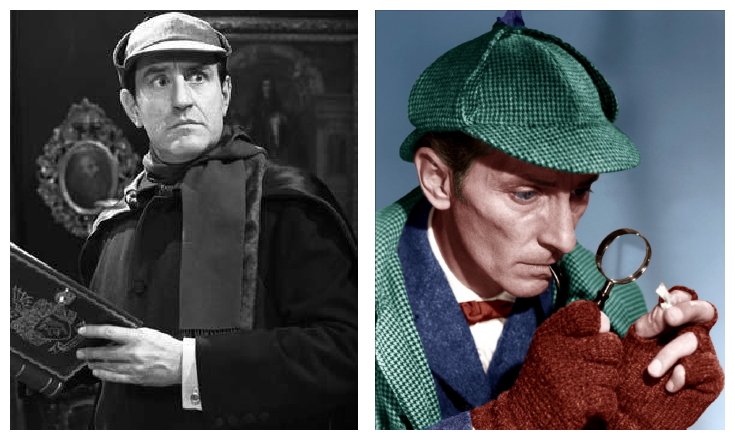 In 1964, the BBC secured the rights to adapt five Sherlock Holmes stories with an option for a further eight from the estate of Arthur Conan Doyle. In 1964, an adaptation of The Adventure Of The Speckled Band was commissioned as a pilot episode for a twelve-part series of Holmes stories. Giles Cooper wrote the script and Douglas Wilmer was cast as Holmes and Nigel Stock as Watson, with Felix Felton as Grimesby Roylott. The hour-long pilot was aired as an episode of the anthology series Detective in May of 1964, and was popular enough to re-air in September. Wilmer and Stock were secured for a twelve-part black-and-white series to air the following year. Wilmer was a lifelong fan of Doyle’s stories and looked forward to portraying the legendary sleuth. 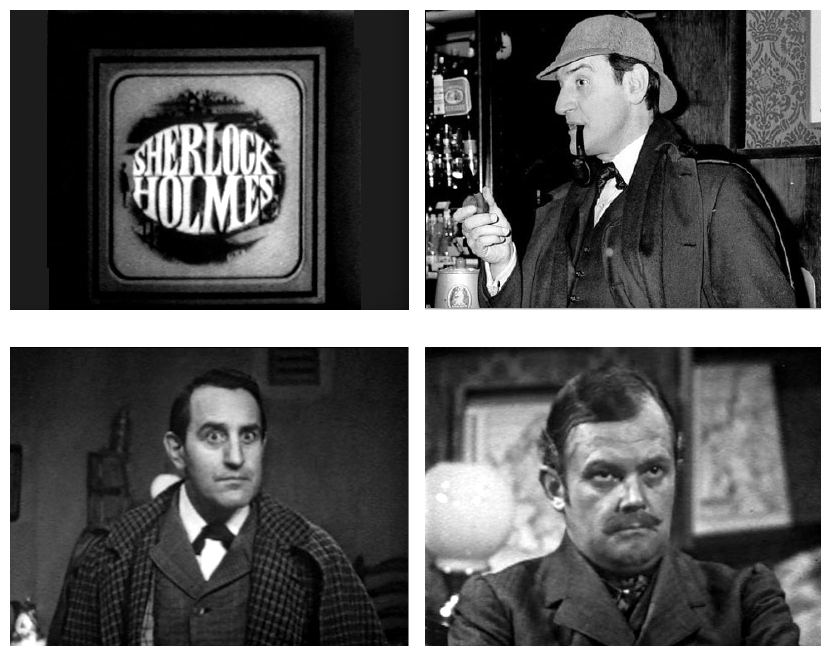 “The part interested me very much because I’d never really, I felt, seen it performed to its full capacity. There’s a very dark side to Holmes, and a very unpleasant side to him. And I felt that this was always skirted round which made him appear rather sort of hockey sticks and cricket bats and jolly uncles, a kind of dashing Victorian hero. He wasn’t like that at all. He was rather sardonic and arrogant, and he could be totally inconsiderate towards Watson. I tried to show both sides of his nature.” Wilmer later stated that the series was riddled with incompetence and the scripts often came in late. He claimed that the scriptwriters ranged from the brilliant to the absolutely deplorable. Some of the scripts were so lacking in quality that Wilmer himself rewrote them sometimes staying up until two o’clock in the morning rewriting. 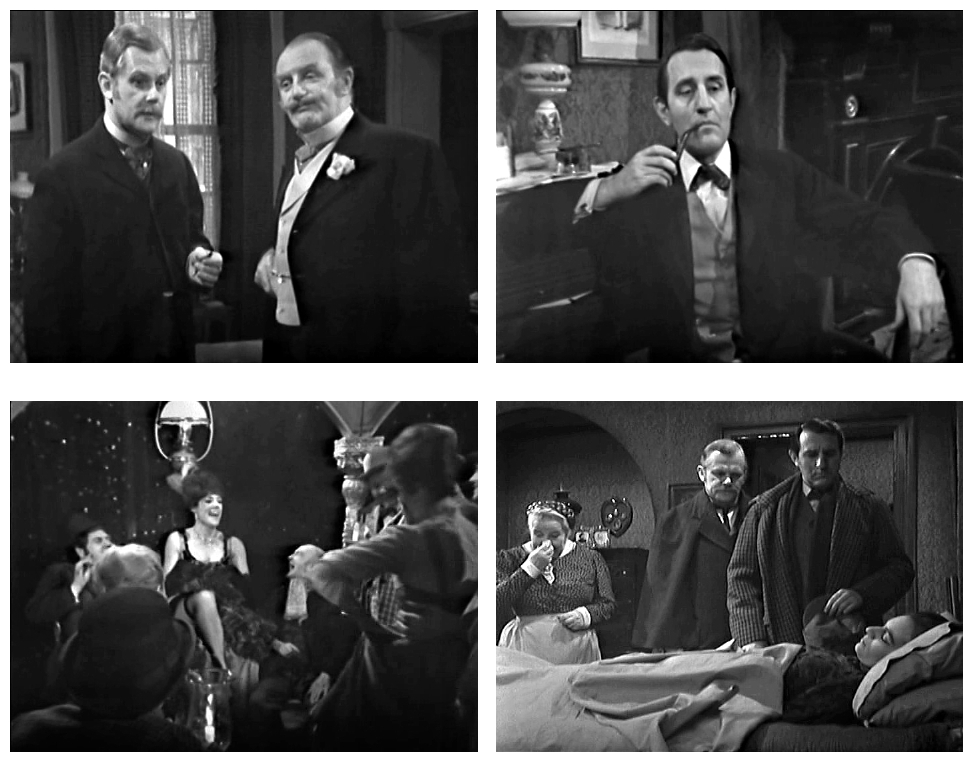 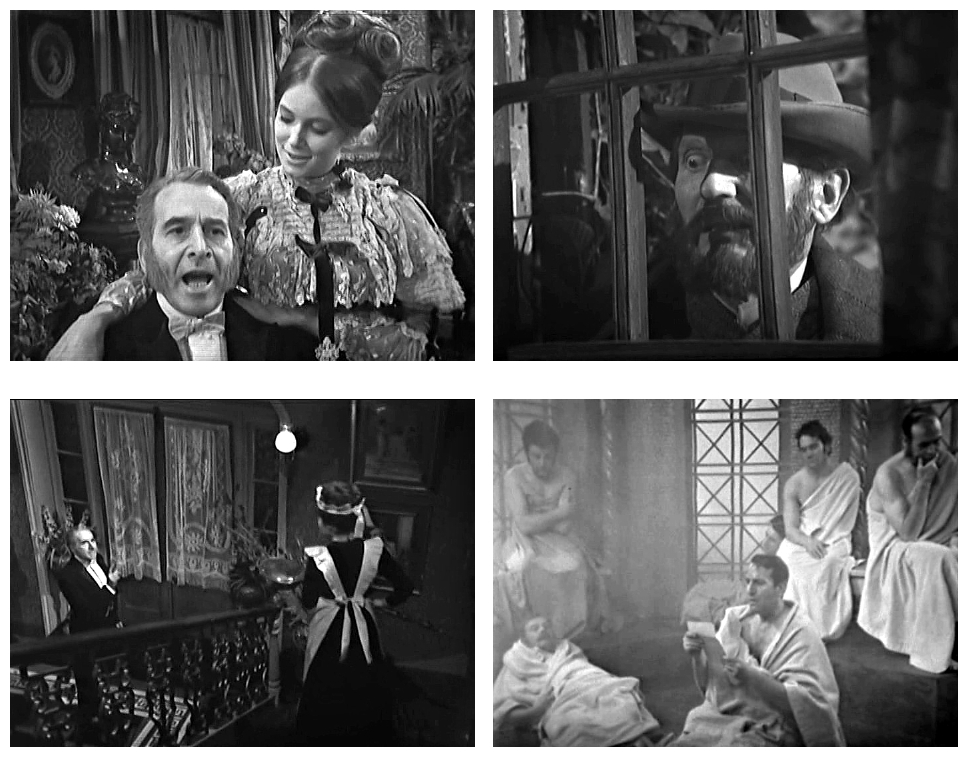 With the popularity of the series, the BBC inquired about Wilmer’s availability for a second season. Wilmer turned down the opportunity after discovering the plan to reduce the number of rehearsal days. The BBC scrambled for a new actor to play Holmes. The first person BBC television drama chief Andrew Osborn suggested was John Neville. Neville had recently portrayed Holmes on the big screen in A Study In Terror (1965), and Nigel Stock certainly approved, but Neville had to turn it down due to prior stage commitments. Finally, Peter Cushing was approached to take over the role of Sherlock Holmes for the 1968 season. Having already played Holmes on the big screen in The Hound Of The Baskervilles (1959), Cushing was eager to tackle the role again. 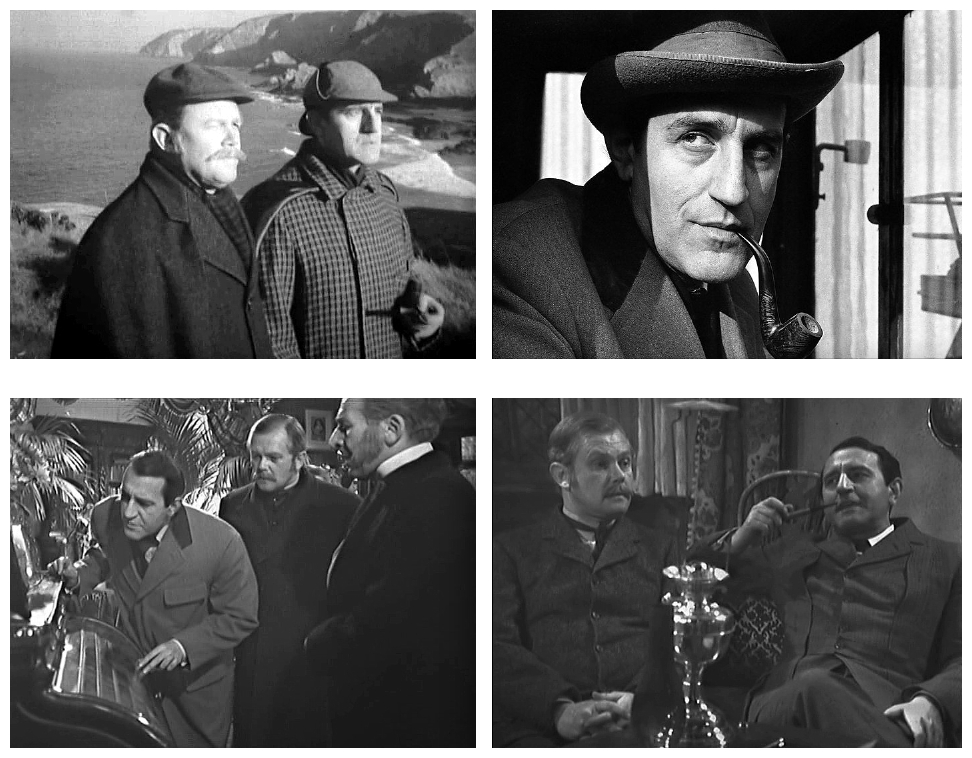 With The Curse Of Frankenstein (1957) and Horror Of Dracula (1958), Hammer Studios in Britain seemed to have found the formula to success and they began to remake other classic chillers. They also dusted-off the old Conan Doyle novel The Hound Of The Baskervilles (1959), producing a full-colour version which concentrated on the grislier aspects of Conan Doyle’s tale. Surprisingly, the film failed to grip the audience and was a disappointment at the box-office, causing Hammer to drop any plans for further Conan Doyle thrillers. Of course, the success or failure of any version of this Holmes story rests squarely on the shoulders of the actor who plays the famous detective. In this respect Hammer had a winner, for it was the great Peter Cushing who was accurately promoted as ‘A New And Exciting Sherlock Holmes!’ 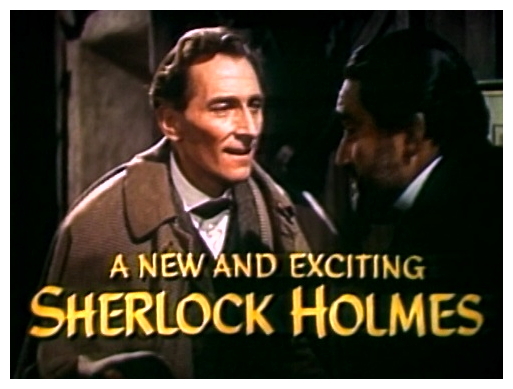 Cushing continued to play Van Helsing, vampire hunter and Count Dracula’s arch enemy, and the actor sensed an affinity of spirit between these two characters: “I think they have the same mental approach. Van Helsing has a great knowledge of vampires and is the essence of absolute good, and Dracula is the essence of absolute evil. And in a way, old Holmes is the same. Moriarty was the arch villain, Holmes was doing detective work as a private detective, but all his work was for the good of humanity in general.” It’s no wonder then, when offered the chance to play Holmes again on television, Cushing jumped in head-first. A full-colour series of sixteen episodes – fourteen stories plus The Hound Of The Baskervilles dramatised in two parts – was to have been the most ambitious and costly series devoted to the famous detective. From the onset the BBC considered such actors as Peter Ustinov, George Sanders and Orson Welles to play villains. 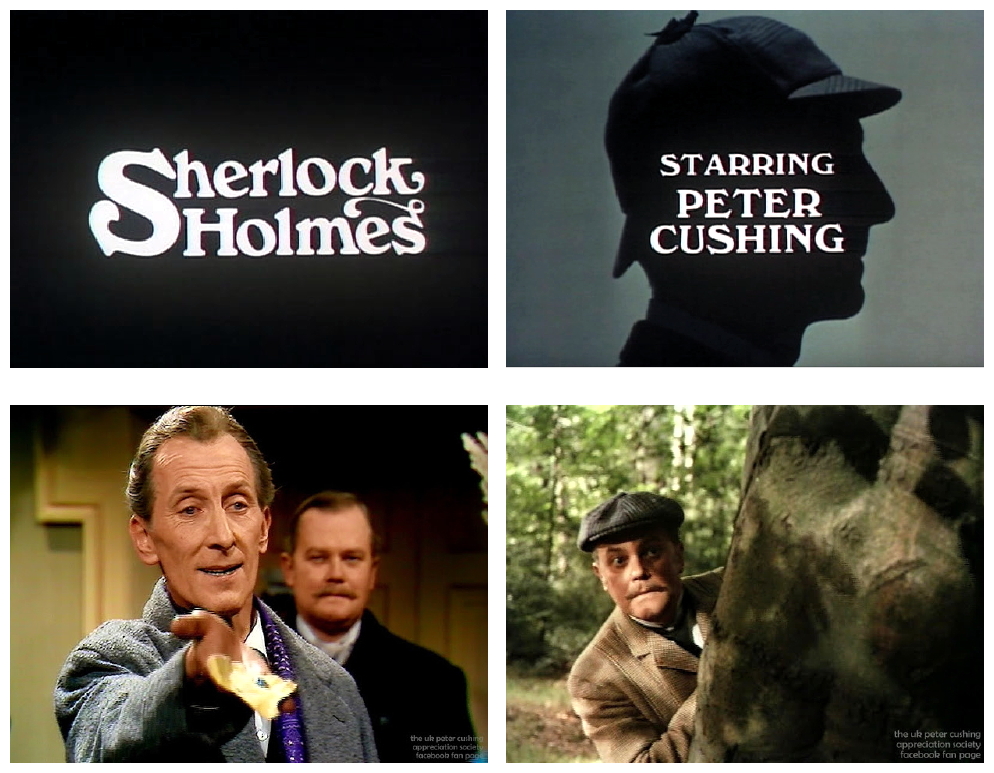 Although this plan never materialised, the series is nevertheless a veritable train-spotter’s paradise of British character actors, including Joss Ackland, Ed Bishop, Peter Bowles, Roger Delgado, Maurice Denham, Nigel Green, Barry Jones, Cherie Lunghi, Juliet Mills, Dennis Price, John Tate, Nick Tate, Nigel Terry, Charles Tingwell, Patrick Troughton, Edward Woodward, Patrick Wymark, Peter Wyngarde and many more! A BBC press release at the time stated: “What is new in this series is the basic approach – a daring realisation of the lurking horror and callous savagery of Victorian crime, especially sexual crime. Here is the recreation of the Victorian half-world of brutal males and the furtive innocent they dominate; of evil-hearted servants scheming and embracing below stairs; of murder, mayhem and the macabre as the hansom cab once again sets out with Doctor Watson and his debonair, eccentric and uncannily observant friend, Mr Sherlock Holmes!” Very commendable, but hardly a new approach, for all such details are to be found in the Conan Doyle canon. 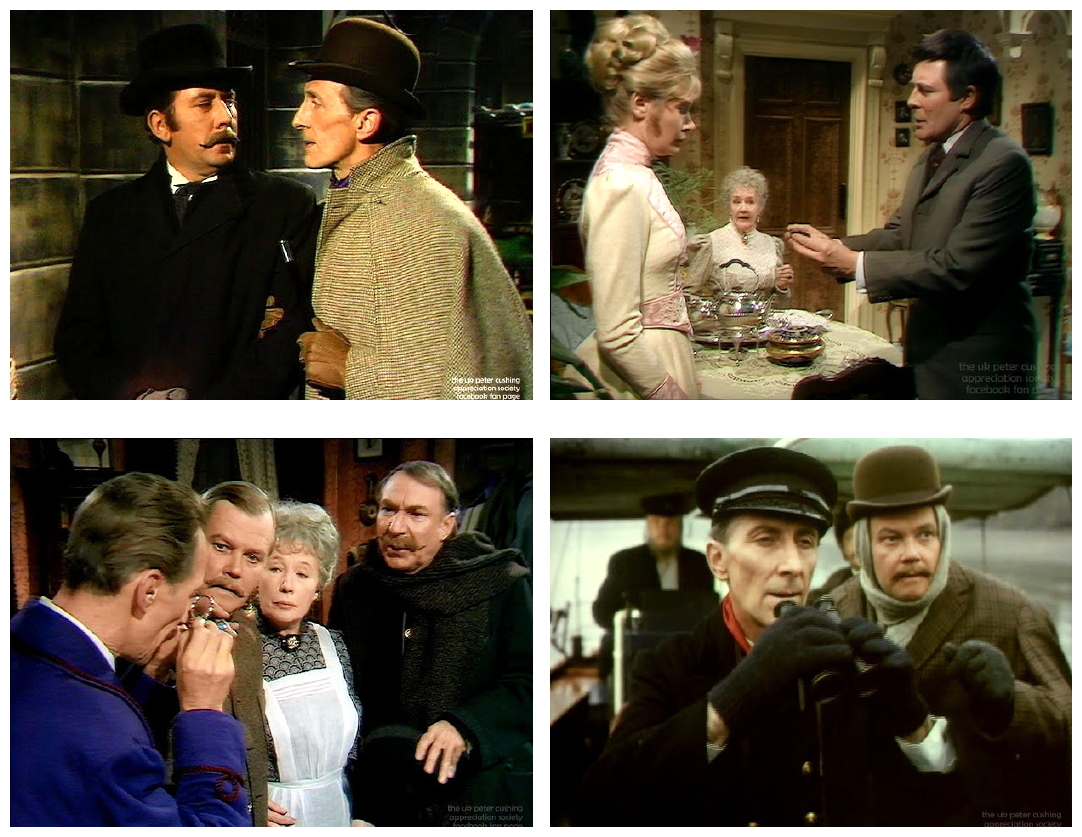 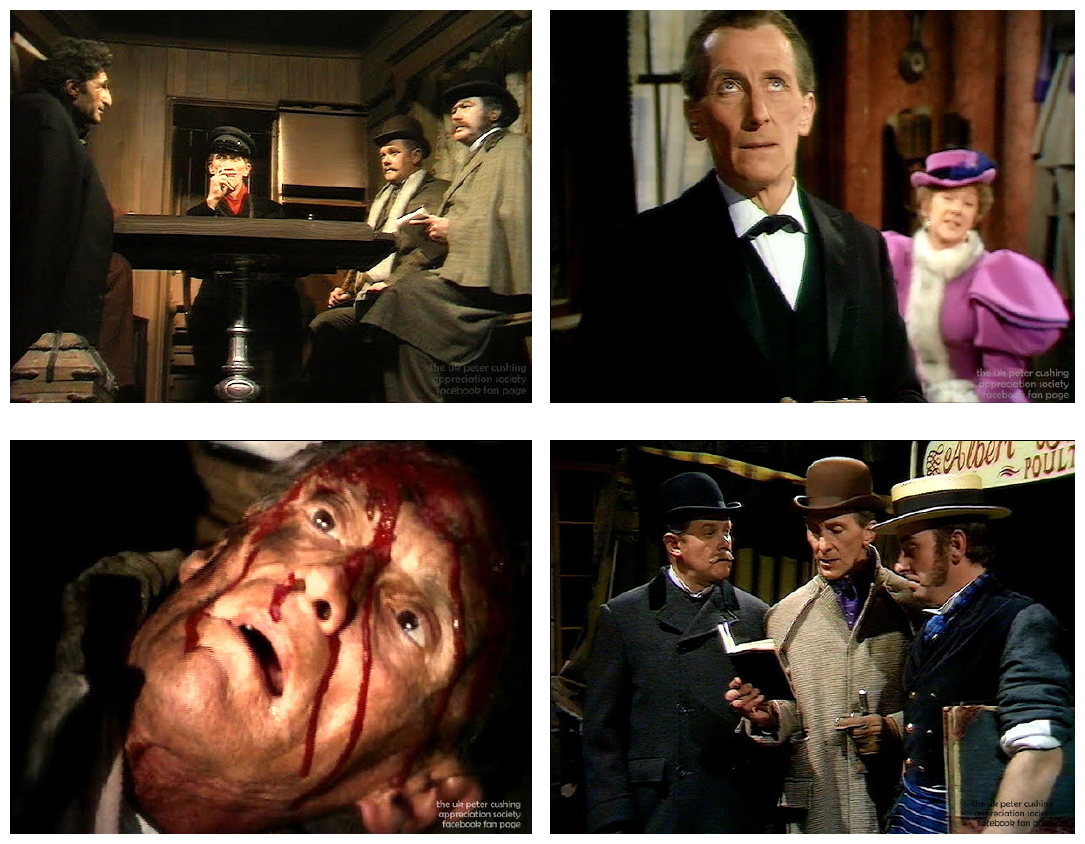 The entire series turned out to be somewhat of a ‘curate’s egg’ which is to say some episodes were excellent, while some episodes failed miserably and suffered from the padding required to fill the fifty-minute time-slot. For personal reasons, Cushing was less than happy with the show: “We had been promised ten days to do each one of those sixteen episodes. Now that’s long enough so long as you have got the scripts beforehand, because I never go to anything unless I know it backwards, then I can change things as I go along. We got the scripts alright, but for each of the sixteen episodes, there were filmed inserts and the BBC had not made allowances for the English weather. By the time we were half-way through the series, the series was already being shown, so we had to catch up and in the end we were doing them in three days. Whenever I see some of these, they upset me terribly, because it wasn’t Peter Cushing doing his best as Sherlock Holmes, it was Peter Cushing looking relieved that he had remembered what to say and said it.” 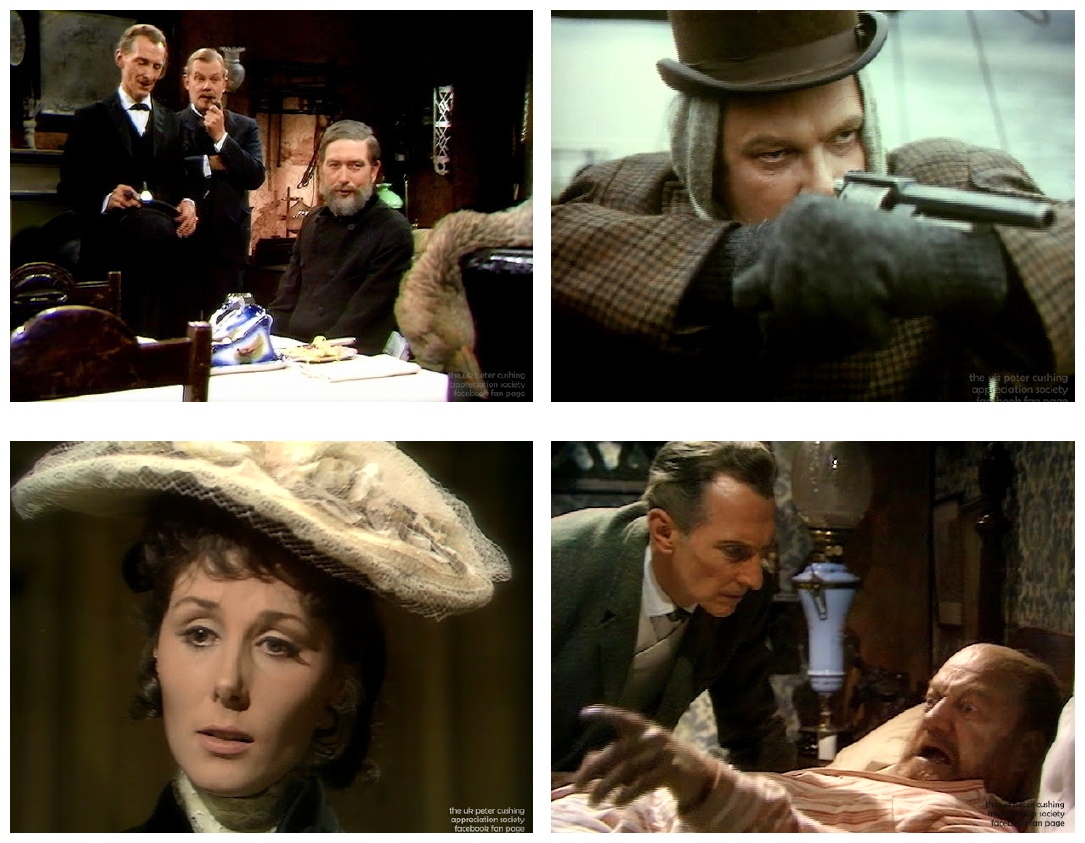 Nevertheless the series had great merit, and was imbued with a reverential concern for presenting the stories in the true Doyle manner. This was mainly due to Cushing’s considered and intelligent portrayal of Holmes, and his efforts to create a true Holmesian authenticity. His preparation for the series was meticulous: “I re-read all the stories in detail. There are so many facets of Holmes that you had to be careful that Doyle had not contradicted himself. For example his attitude to the country. On one occasion Holmes hates the country because nothing happens there, then he absolutely contradicts himself and says far worse things happen in the country.” He found dialogue phrases in the scripts that were too modern for the Victorian era and asked if they might be changed. He also made sure that as Holmes he never uttered the deathless phrase ‘Elementary, my dear Watson’. 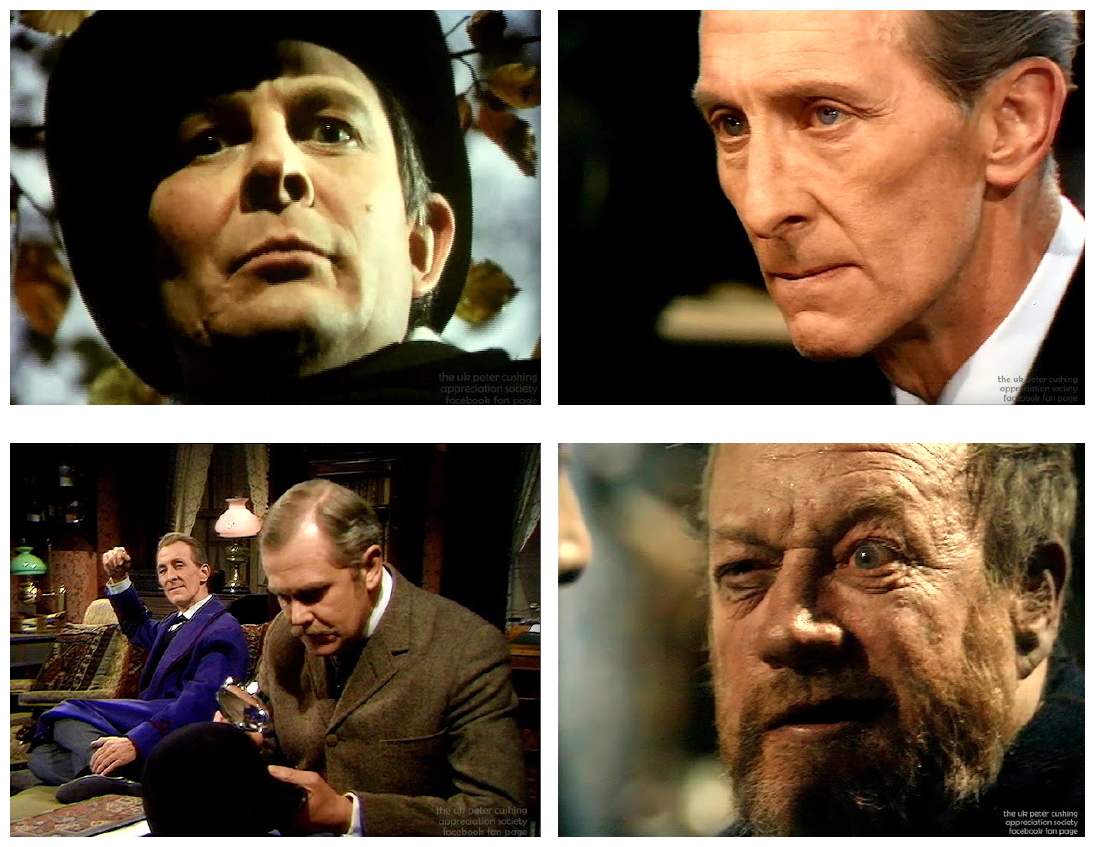 At one of the production conferences Cushing made another request, this time regarding the appearance of Holmes: “I said that just as one associates Tenniel’s drawings with Alice In Wonderland, so with Holmes you associate so much Paget; although there have been other illustrators, he was the one. So, as I’ve got all the original Strand magazines showing what they wore in each story, could we dress each one as per the illustrations.” The BBC agreed and, in doing so, they exploded the myth of Holmes’ Inverness cape: “It’s not an Inverness cape in the drawings, it’s a long overcoat with a hood and we had that coat made with the hood.” The colour of Holmes’ dressing gowns as stated in the stories were carefully copied. The plum, the grey and the famous ‘mouse’ coloured one. Holmes’ pipes were also meticulously catalogued and were made by the famous pipe-makers Charatars in Jermyn Street, London. 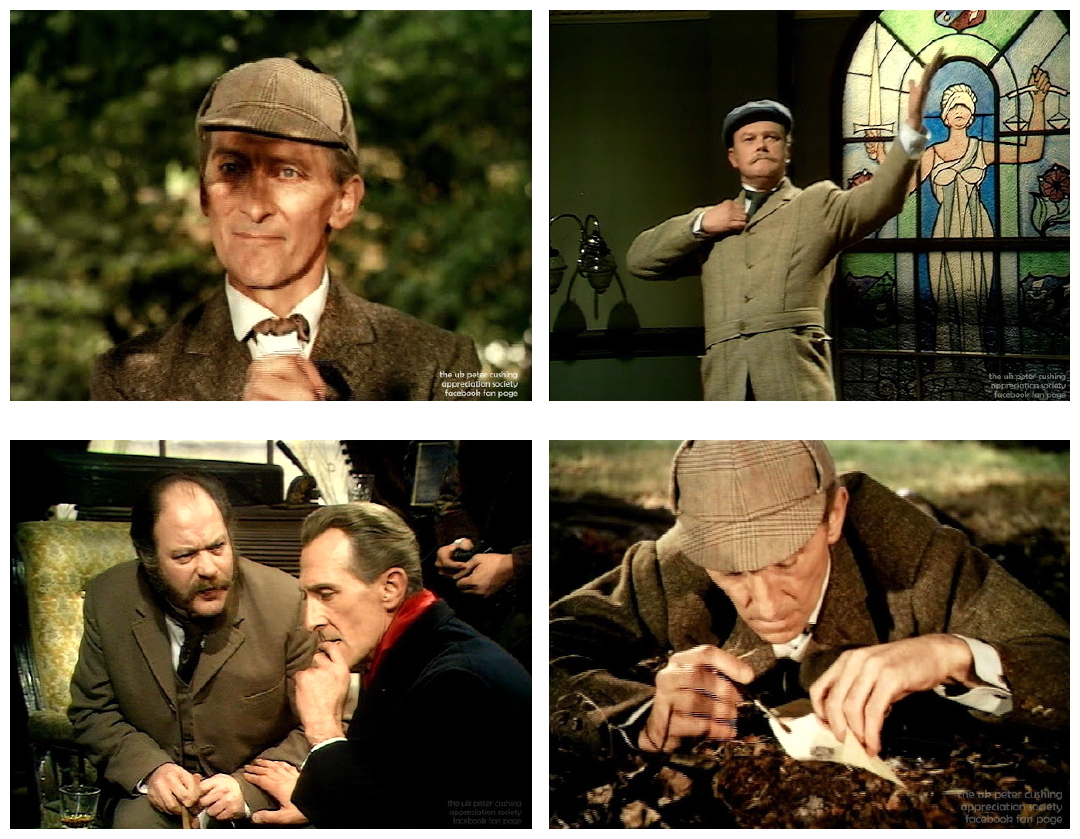 Cushing quite rightly rejected the Meerschaum pipe, which was introduced many years before by actor William Gillette but was never referred to as canon. “The pipes are very well described and the reason why he smokes them. His favourite was the dirty old black clay pipe that ‘ponged’ the study out, that was a great one for thinking. Then he had a long cherrywood for tranquility. Although I never had a Meerschaum, I did have a little bent one, but that was alright.” Cushing recalls how these attempts at authenticity did not please all the viewers: “The very first story to be shown was The Hound Of The Baskervilles in which Holmes was dressed nearly all the time in the conventional way of the time which was frock coat and a top hat. Letters poured into the BBC saying, why on earth do you want to dress Holmes and Watson like a couple of undertakers?” 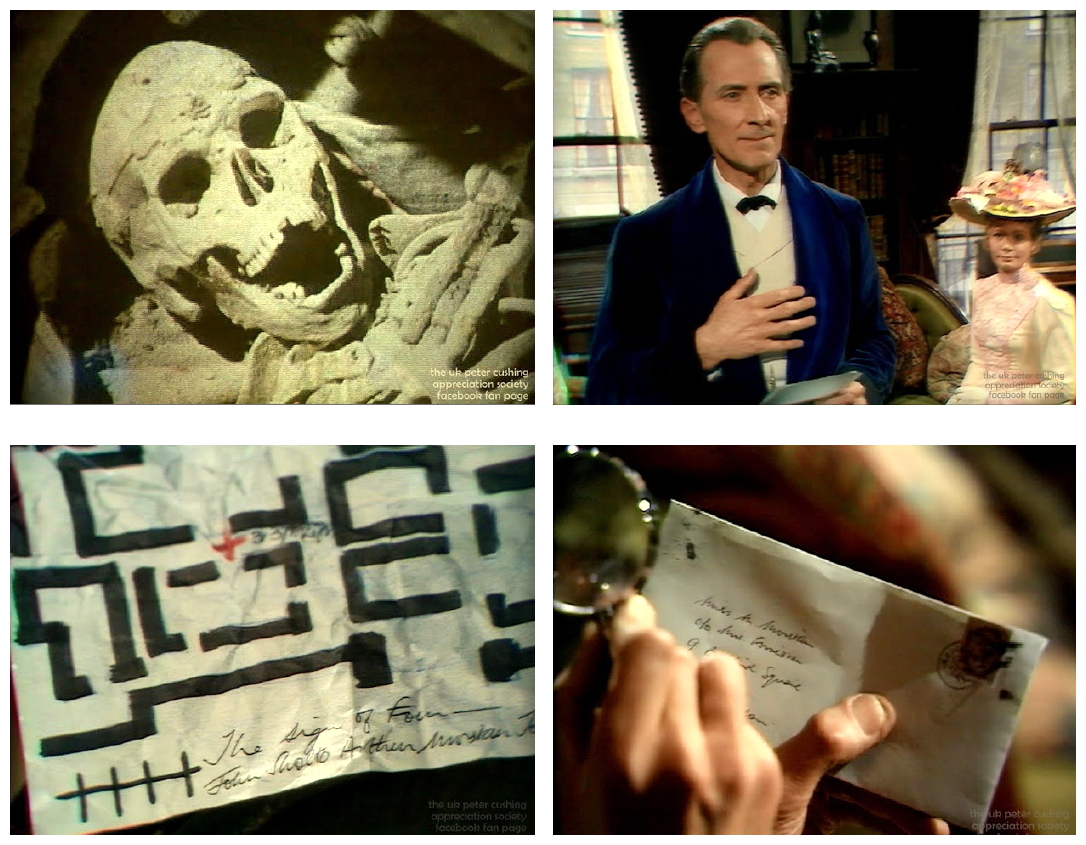 “You see, people only think of Holmes in a deerstalker, but in those days they were much more clothes-conscious – you had country clothes and you had town clothes, and you wore them as such. And you notice that Holmes only wore his deerstalker when he was off in the country or when he came up from the country and was crossing from Victoria or whichever station to Baker Street.” The television version of The Hound Of The Baskervilles was in fact the first time that Conan Doyle’s tale of the spectral hound had actually been filmed on Dartmoor. However, because the story was shown in two parts and followed the novel almost to the letter, it failed to grip as well as Hammer’s Hound. Cushing himself also preferred the film version: “I prefer filming anyway and I think, with any luck, you can get a little nearer a certain perfection than you can in any other medium.”

Nigel Stock, an excellent actor indeed, remained to play Watson for the entire two seasons and, although he presented the good doctor as an affectionate character, his portrayal was firmly in the Nigel Bruce mould. As a result Stock’s performances, to some extent, were out of keeping with the authentic ambiance of the rest of the series. In talking to Cushing it becomes apparent that his portrayal of Sherlock Holmes is a labour of love. As an actor he commits himself totally to every role he plays, but with Holmes he naturally employs an added dimension of interest because he so loves the character and all the stories: “I love them all. It’s the atmosphere I love so much, and they’ve all got that. I love the way they start – it was always foggy and there were these equinoctial gales.” He reads the stories, not just as background reading to his performance as Holmes, but also purely for pleasure.

With his gaunt features, high forehead and piercing blue eyes, Peter Cushing remains the thinking man’s Holmes, who is very aware of Conan Doyle’s place in the creation of the legend and who always goes back to the source in his efforts to present the authentic Sherlock Holmes. Many believe Basil Rathbone to be the ideal Holmes and in so many ways he is, but if Rathbone comes can Cushing be far behind? Having demonstrated to you the perils of probing the dark depths of English television, I’ll vanish into the night, but not before profusely thanking Peter Haining, author of The Television Sherlock Holmes (Virgin Books 1994), for assisting my research for this article. Don’t forget to rendezvous with me at the same time next week when I’ll discuss another dubious treasure for…Horror News! Toodles!