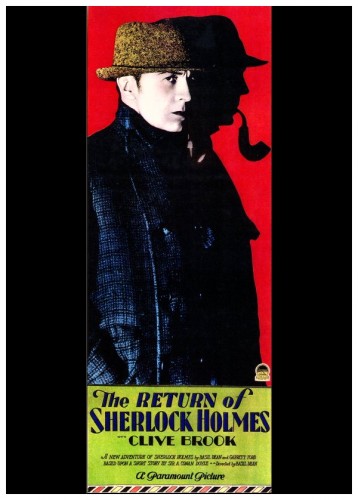 “Holmes is attending the wedding of Roger Longmore to Mary Watson, when Roger’s father Captain Longmore is found murdered in his study. Holmes suspects poison after finding a trick cigarette case with a poisoned needle which is brought into play when the opening spring is pressed. Meanwhile Roger disappears and, acting on a few slender clues, Holmes rushes off to Cherbourg with Watson and Mary where they catch an ocean liner for America. Holmes suspects the ship’s doctor and with the aid of various disguises, one of which is that of a German musician who performs conjuring tricks, he discovers Roger is on board.”

There were more than seventy films made during the silent era featuring the world’s greatest fictional detective created by author Arthur Conan Doyle, many of them short movies (two-reelers) from England, Italy, France, Denmark and the USA. The very first American feature-length Holmes film, Sherlock Holmes (1916), was based on the popular play written as a vehicle for himself by William Gillette. He had been playing the role on stage for some seventeen years already, so he was therefore the logical choice to star in the film version. It was in the very early sound days of 1929 that the first talking Holmes appeared on the screen. He was played by Clive Brook, a British actor often seen in ‘cad’ roles. Brook portrayed Holmes with just the right amount of detachment, but it was a characteristic of his acting style to be stiffly formal. As a result of this stiffness, his Holmes at times appeared rather priggish and humourless. Nevertheless, Brook was physically right for the part and had great screen presence. He emerges as perhaps the most interesting and effective Holmes since Gillette. 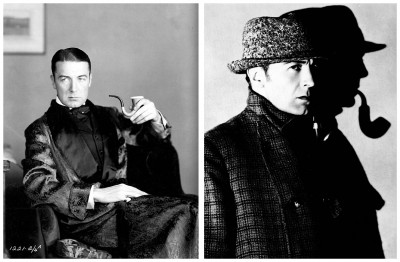 It was entitled The Return Of Sherlock Holmes (1929), although it is never revealed where he had been. It was an American production for Paramount Studios, shot very quickly and cheaply in a small cramped studio in midtown Manhattan, and on a sea trip from England to New York. The film is limited in action, most of it taking place aboard an ocean liner, but the concentration on talk was typical of the movies of the early sound days which exploited dialogue and sound rather than action. As well as being the first sound Holmes, The Return Of Sherlock Holmes was also the first film in which the detective was updated and presented as a contemporary character, and this seemed to increase his fascination for the cinema audiences. The plot was original, gracing Doctor Watson (H. Reeves-Smith) with a daughter, and bore no resemblance to any of the Conan Doyle stories.

Holmes is attending the wedding of Roger Longmore (Phillips Holmes) to Mary Watson (Betty Lawford), when Roger’s father Captain Longmore (Charles Hay) is found murdered in his study. Holmes suspects poison after finding a trick cigarette case with a poisoned needle which is brought into play when the opening spring is pressed. Meanwhile Roger disappears and, acting on a few slender clues, Holmes rushes off to Cherbourg with Watson and Mary where they catch an ocean liner for America. Holmes suspects the ship’s doctor and with the aid of various disguises, one of which is that of a German musician who performs conjuring tricks, he discovers Roger is on board. Holmes eventually comes face-to-face with his arch-enemy Professor Moriarty (Harry T. Morey), and one of the highlights of the film is the scene where Moriarty in disguise entertains Holmes to dinner, only to be finally unmasked. Rather than be taken alive, Moriarty commits suicide. The final lines of the film provide the first use of Holmes’ trademark phrase, “Elementary, my dear Watson.” The phrase is not to be found in the writings of Conan Doyle.

There are some unusual gimmicks used, such as Holmes’ rather unnecessarily elaborate procedure of daubing the heels of Watson’s shoes with phosphorous so as to provide an illuminated track to Moriarty’s cabin. Watson is portrayed as a bumbling fatuous character by H. Reeves-Smith who appears noticeably older than Holmes. Despite Clive Brook‘s reputedly excellent diction, a contemporary review of the film comments that although in general the sound was good, the star’s voice did not register as well as the others. Speaking of which, a silent version of the film was also produced to accommodate cinemas which did not feature sound equipment. Later that same year Clive Brook made a second appearance as Holmes in an all-star musical revue called Paramount On Parade (1929). He appeared as the detective in a comedy sketch which also involved two of Paramount’s other featured characters: Philo Vance (William Powell) and Doctor Fu Manchu (Warner Oland). It is of interest here only because it represents the first time that Holmes has ever died on-screen.

The Return Of Sherlock Holmes was also one of the first of seven hundred Paramount productions which were sold to MCA/Universal in 1958 for television distribution, and have been owned and controlled by Universal ever since. However, because of legal complications, this particular title was not included in the original television package and may have never been televised. Another reason may be that the original sound disks for this particular film never survived. Clive Brook’s third and final appearance as the man from Baker Street was in 20th Century Fox‘s stylish production titled simply Sherlock Holmes (1932). The plot is supposedly based on Conan Doyle by way of the Gillette stage play though oddly enough the official synopsis bears little similarity to the finished film written by Bertram Millhauser, who would reappear later as one of the perennial writers of Universal Studio‘s Holmes series, but that’s another story for another time. I’ll now wrap-up this week’s burnt offering and respectfully request your presence next week, when your leg will be crudely humped by another cinematic dog from Hollywood for…Horror News! Toodles! 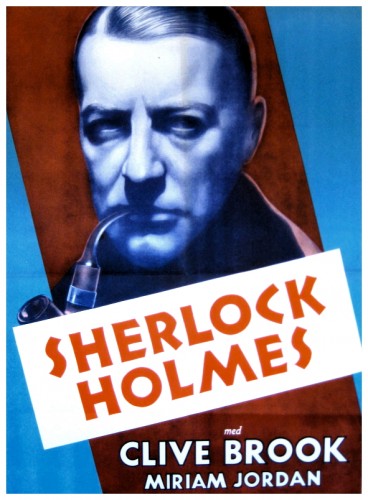 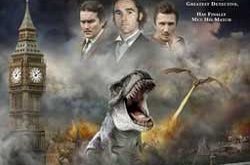