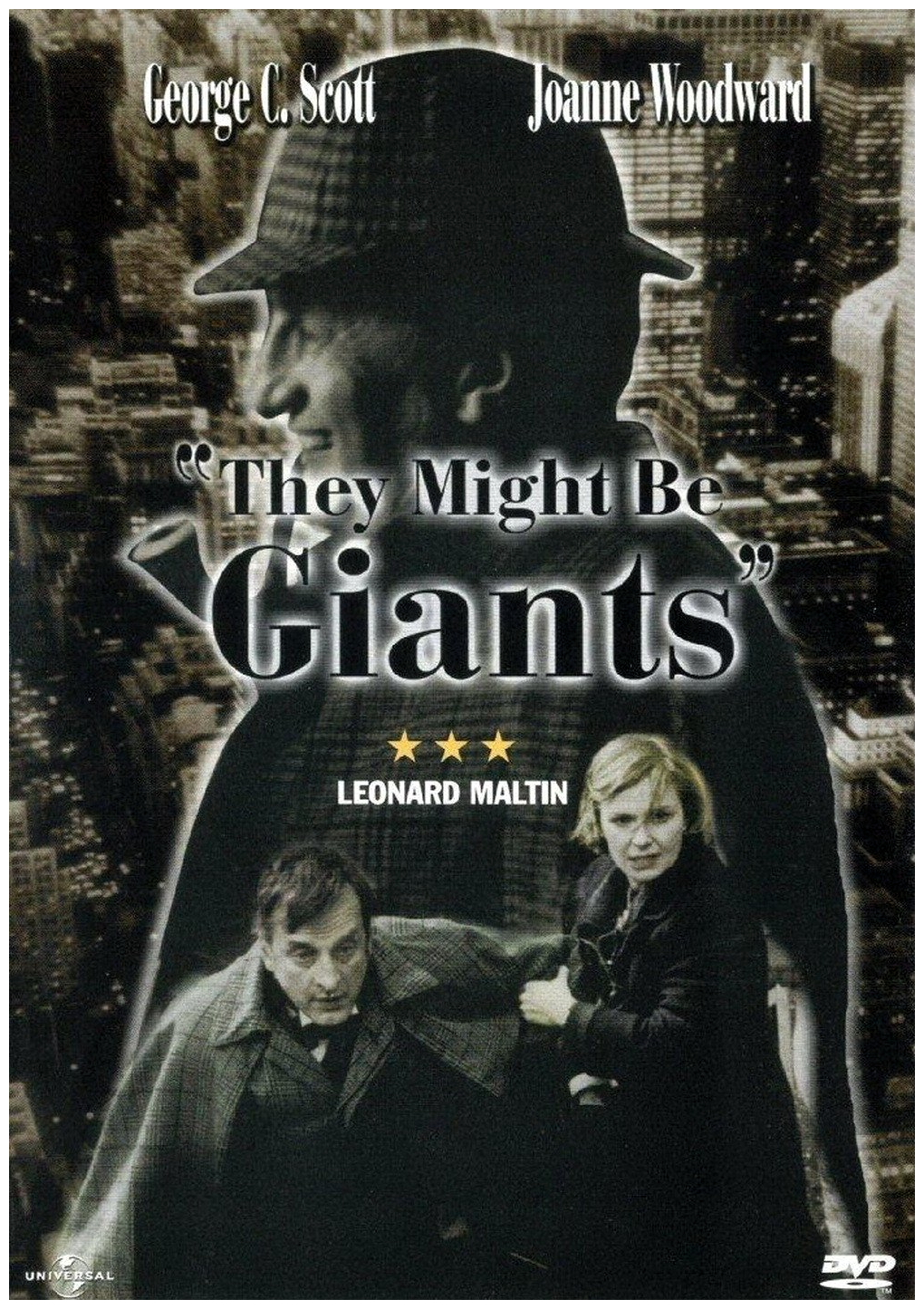 “They Might be Giants chronicles the adventures of Sherlock Holmes and Doctor Watson in modern-day New York City. The fact that Sherlock Holmes is a psychotic paranoid and Doctor Watson is a female psychiatrist fascinated by his case is almost beside the point. Doctor Watson follows Holmes across Manhattan and is, against her better judgment, drawn into the master detective’s world of intrigue and danger. This is a sweet, goofy and fairly romantic film that asks the questions “Whose reality is right, and does it really matter?”” (courtesy IMDB)

Film historian William K. Everson noted in his excellent book The Detective In Film (1974) that, “Since the seventies the detective film was more and more emphasising speed, action, violence, sex and the kind of ultra-modern and flashy directorial techniques that would inevitably be alien to a faithful and effective filming of Doyle, it is not surprising that Mister Holmes bade the movies farewell.” Filmmaker Danny Boyle managed to prove old Everson wrong with the release of Sherlock Holmes (2009) which earned Robert Downey Jr a Golden Globe Award for his portrayal of Holmes and which co-starred Jude Law as Watson. The film and its sequel – Sherlock Holmes: A Game Of Shadows (2011) – have proved so popular a third film is due for release soon. Although these films focus too heavily on Holmes’s antisocial personality, it was rather exhilarating for most Holmes fans to see their hero back where he belongs, in a Victorian foggy London town amongst the hansom cabs and gas-lamps. 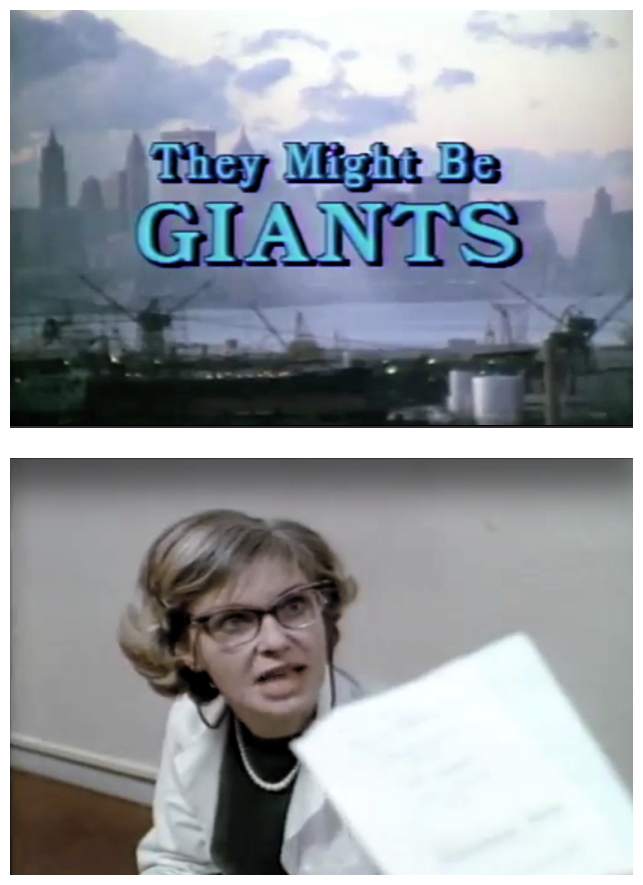 I might be old-fashioned, but I feel that Holmes movies, like Noir and German Expressionism, is a genre that depends heavily on its time in history. If you update Holmes to modern times, the characters come across like any another buddy-cop show featuring a detective with Obsessive Compulsive Disorder. You may as well be watching Monk, Poirot, Dirk Gently, or a gazillion other shows that have utilised this formula first made famous by Edgar Allan Poe in Murders In The Rue Morgue, and later honed by Sir Arthur Conan Doyle. I can’t deny the popularity of the recent Sherlock series starring Benedict Cumberbatch, nor Elementary starring Johnny Lee Miller, but I’m afraid audiences seem to be attracted more to the heartthrob lead actors than to what’s left of Doyle’s stories. But this doesn’t mean we can’t have fun with the characters, of course. They Might Be Giants (1971) provides one of the most interesting variations on a Sherlockian theme. 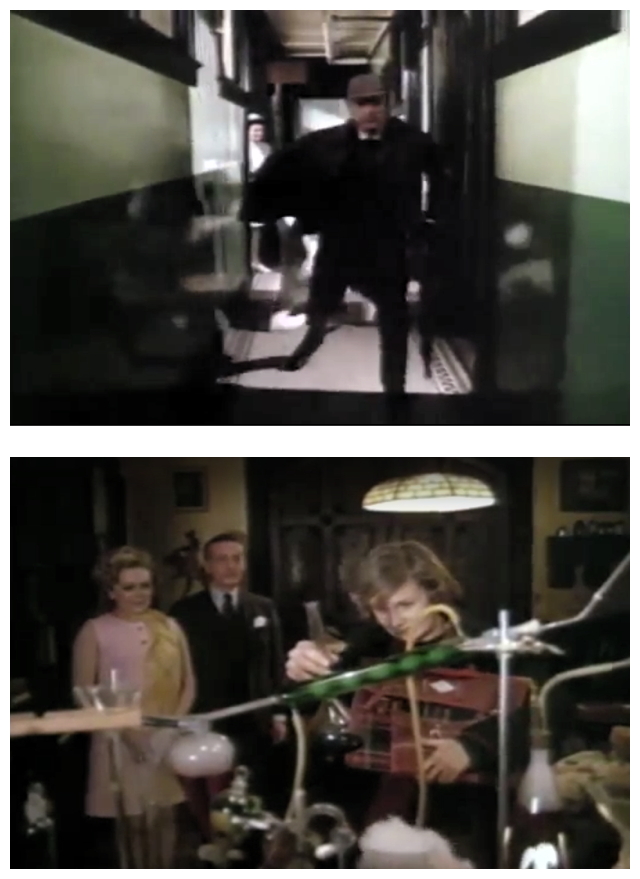 The story is set in contemporary New York and centres around Justin Playfair (George C. Scott) who, since the death of his wife, has withdrawn into a private fantasy in which he dresses, speaks and behaves like Sherlock Holmes. His brother (Lester Rawlins) hopes to have Justin committed to an asylum so he can take over the family estate worth millions, and he is spurred on in this resolution when he comes under a threat of blackmail. Taken to a clinic for analysis, Justin encounters psychiatrist Doctor Mildred Watson (Joanne Woodward). He fascinates her with an authoritative Sherlockian diagnosis of one of her patients – a large lumbering Mr Small (Oliver Clark) who persists in refusing to speak. Justin establishes that Small believes he is Rudolph Valentino and, as a star of silent movies, finds it unnecessary to speak. 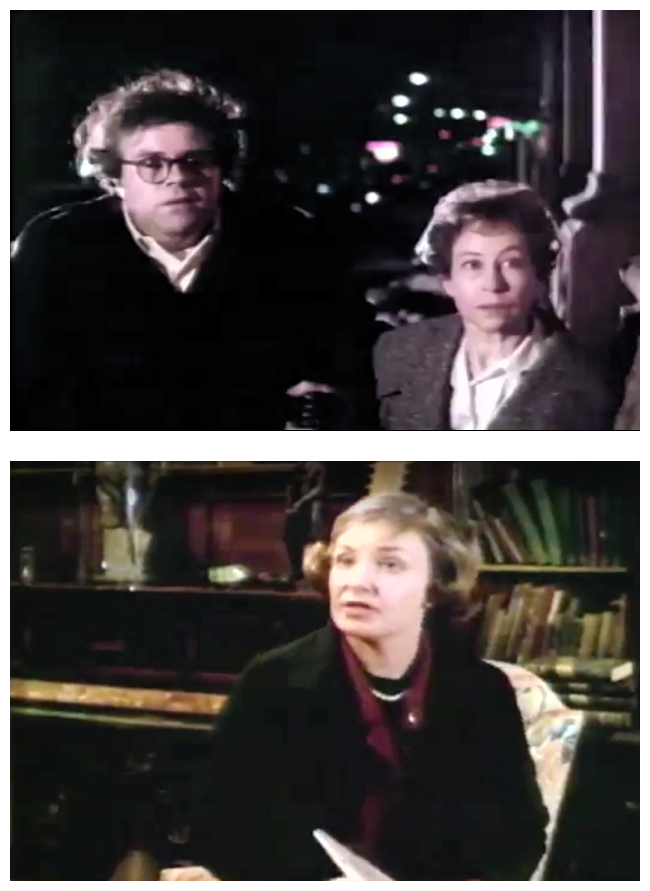 Eager to take on this classic case of paranoia, Watson calls on Justin at home where she finds him ensconced in his study which is a replica of Holmes’s Baker Street room. She is swiftly disconcerted by Justin’s authentic and acute analysis of her own mental state. However, on hearing her name, Justin believes that fate has provided him with his long-awaited Watson, and he persuades her to join him in his pursuit of the dreaded Professor Moriarty. The duo then begin an enigmatic quest, with Justin following all manner of bizarre and (to Watson) unintelligible clues, with the two growing closer to each other in the process. While they wander around New York following the trail that Justin conjures up, the blackmailer (James Tolkan) tracks them with a view to helping Justin’s brother more speedily into his inheritance. Accompanying Justin, Watson discovers that he is completely accepted as Sherlock Holmes by a group of unhappy urbanites who believe in the reality of this noble character. 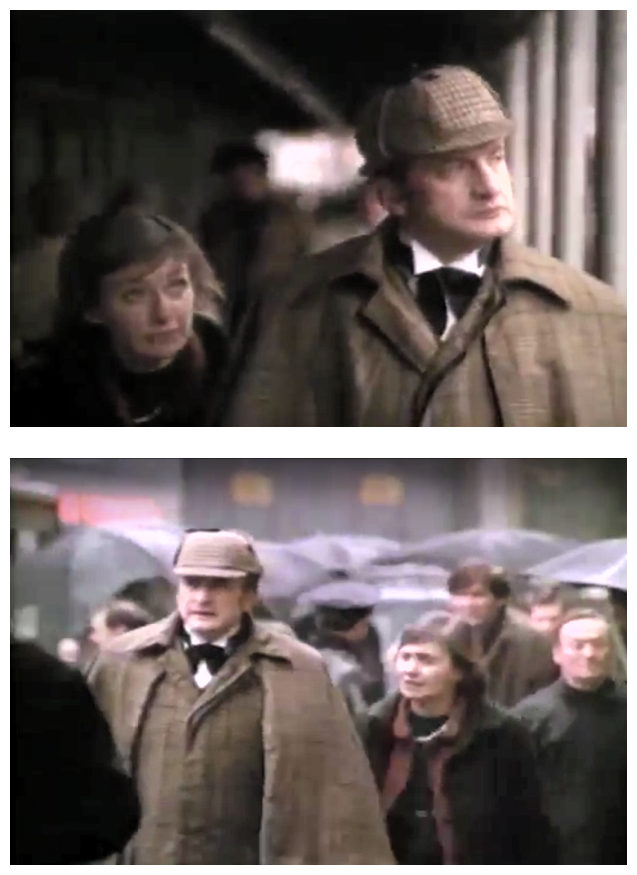 In a sense this provides a partial explanation for the continuing popularity of Holmes and why letters still arrive at his Baker Street address. The qualities embodied in the character of Sherlock Holmes engender a desire in many people to believe in him as a real person, and remains for them, as he was for Watson, “The best and wisest man whom I have ever known.” Finally, Justin and Watson follow a clue to Central Park. As they wait there in the darkness for Moriarty, they hear the clip-clop and jingle of a hansom cab and a bright light shines ahead of them. It would seem that, for them, Moriarty does exist and the final impression is of something immense coming at them out of the night. The film is a delightful piece of whimsy with George C. Scott and Joanne Woodward giving extremely sensitive performances. Scott is too American to be regarded as an authentic interpretation of Holmes but, of course, this is not the intention of the filmmakers. 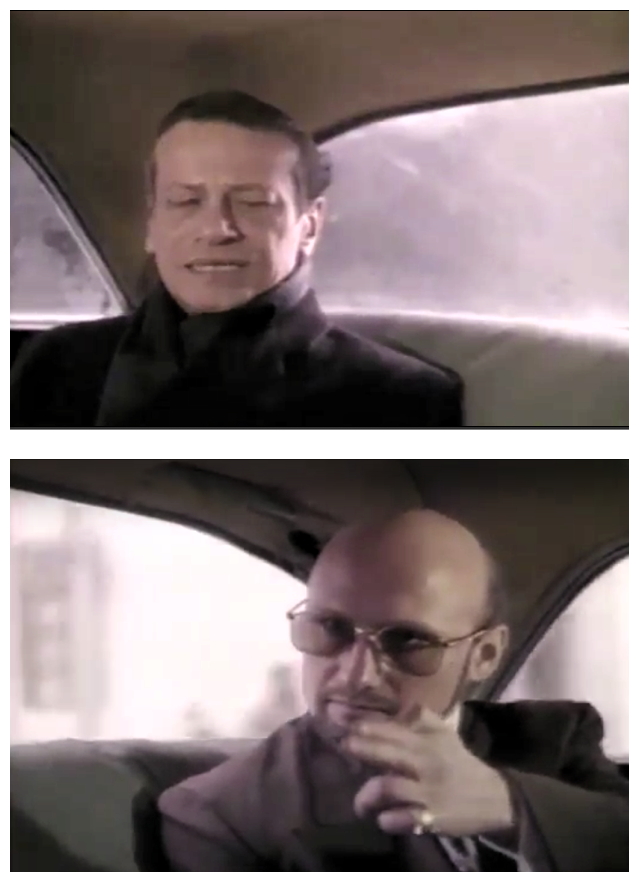 There is one charming sequence when Justin and Watson on the run bump into a police officer who, on observing Justin’s Inverness Cape and deerstalker, tips his hat and says, “Oh, Mister Rathbone, this is an honour, sir.” James Goldman‘s screenplay presents an imaginary Moriarty figure as a symbol of absolute, all-pervading Evil, while the Justin/Sherlock character represents Good fighting alone in an uncomprehending world. Justin’s character also has elements of the legendary Don Quixote who was, of course, crazy to see all the windmills as giants, and the title is an indirect reference to Quixote’s famous exploit of ‘Tilting At Windmills’ believing them to be ‘Monstrous Giants’. Despite protests from his sidekick Sancho Panza and being soundly defeated at the hands of a ‘Giant’ (struck and thrown by one of the mill’s sails), Quixote maintains his belief that the mills are not buildings but giants. 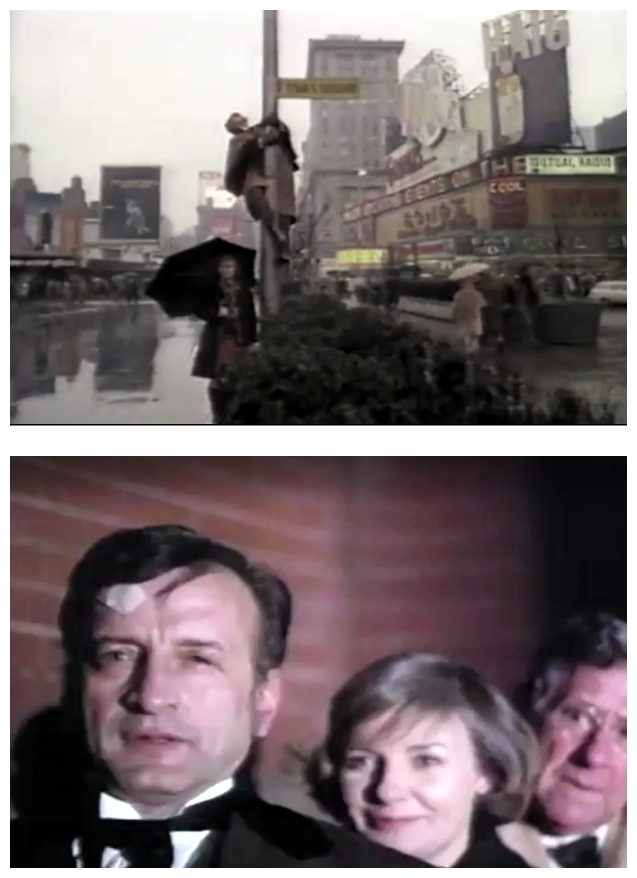 Referring to this, Justin reflects: “Of course, he carried it a bit too far. He thought that every windmill was a giant. That’s insane. But, thinking that they might be, well, all the best minds used to think the world was flat. But, what if it isn’t? It might be round. And bread mould might be medicine. If we never looked at things and thought of what they might be, why, we’d all still be out there in the tall grass with the apes.” George C. Scott and Joanne Woodward are ably supported by some excellent (and rather well-known) character actors, including Jack Gilford, Al Lewis, Rue McClanahan, F. Murray Abraham, M. Emmett Walsh, and Paul Benedict as a street vendor selling chestnuts (the very next shot shows a poster advertising the play The Front Page, which Benedict just happened to be cast in three years later. Coincidence? Probably). 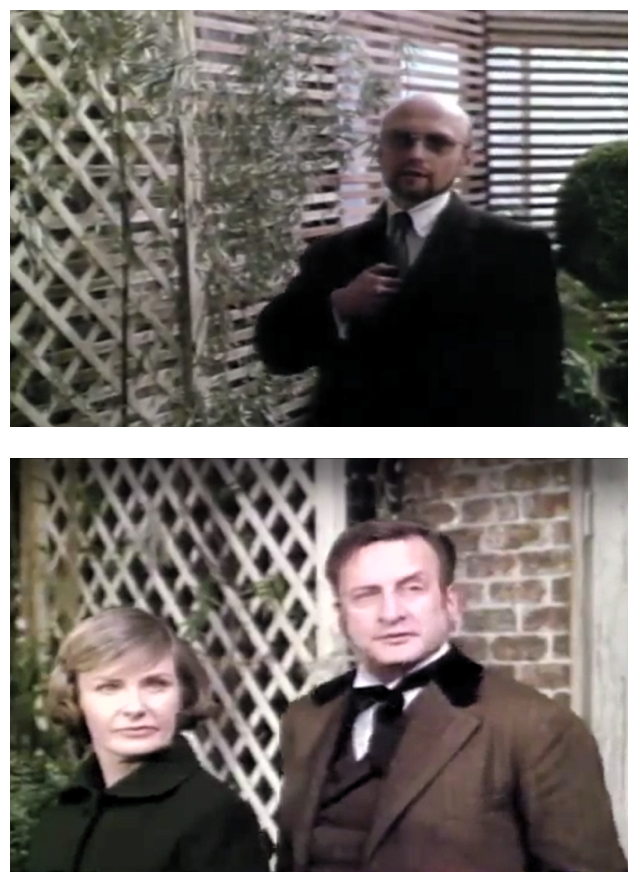 Alas, They Might Be Giants proved too gentle for seventies tastes, receiving sparse screenings and mixed reviews. New York Times critic Vincent Canby dismissed it as a “Mushy movie with occasional isolated moments of legitimate comedy,” while the nicest thing Leonard Maltin could say was that it’s a “Fun yarn about about a daffy gentleman.” Complete copies of the film are difficult to find, and most home video releases have been edited down. The original release was 98 minutes. The television version was 96 minutes. Netflix’s version is 91 minutes. The currently available DVD is only 84 minutes. It seems that all the edited versions omit the penultimate scene in the grocery store, though it can be seen in the Netflix version. 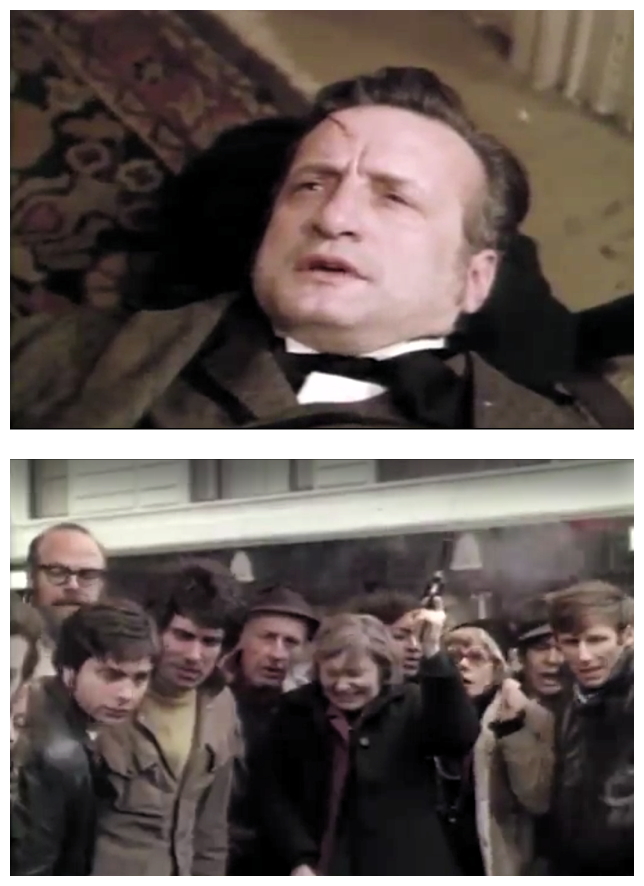 Worthy – or should I say ‘unworthy’ – of mention is the made-for-television movie The Return Of The World’s Greatest Detective (1976), a pilot for an intended series starring Larry Hagman as an inept motorcycle cop named Sherman Holmes who, while reading Arthur Conan Doyle, suffers a head injury when his motorbike falls on him. In true Fred Flintstone fashion, he becomes convinced that he is indeed Sherlock Holmes and, as a direct result of his injury, acquires formidable powers of observation and deduction. Inspired by They Might Be Giants, Dean Hargrove and Roland Kibbee wrote the script as a pilot for a series called Alias Sherlock Holmes, but poor reviews and poorer ratings put an end to that particular idea. I’ll now leave you with that rather nasty thought in mind and quickly make my farewells, politely asking you to hit the road with me again next week while I drive you to delirium to witness another car crash on the gridlocked streets of Hollywood for…Horror News! Toodles! 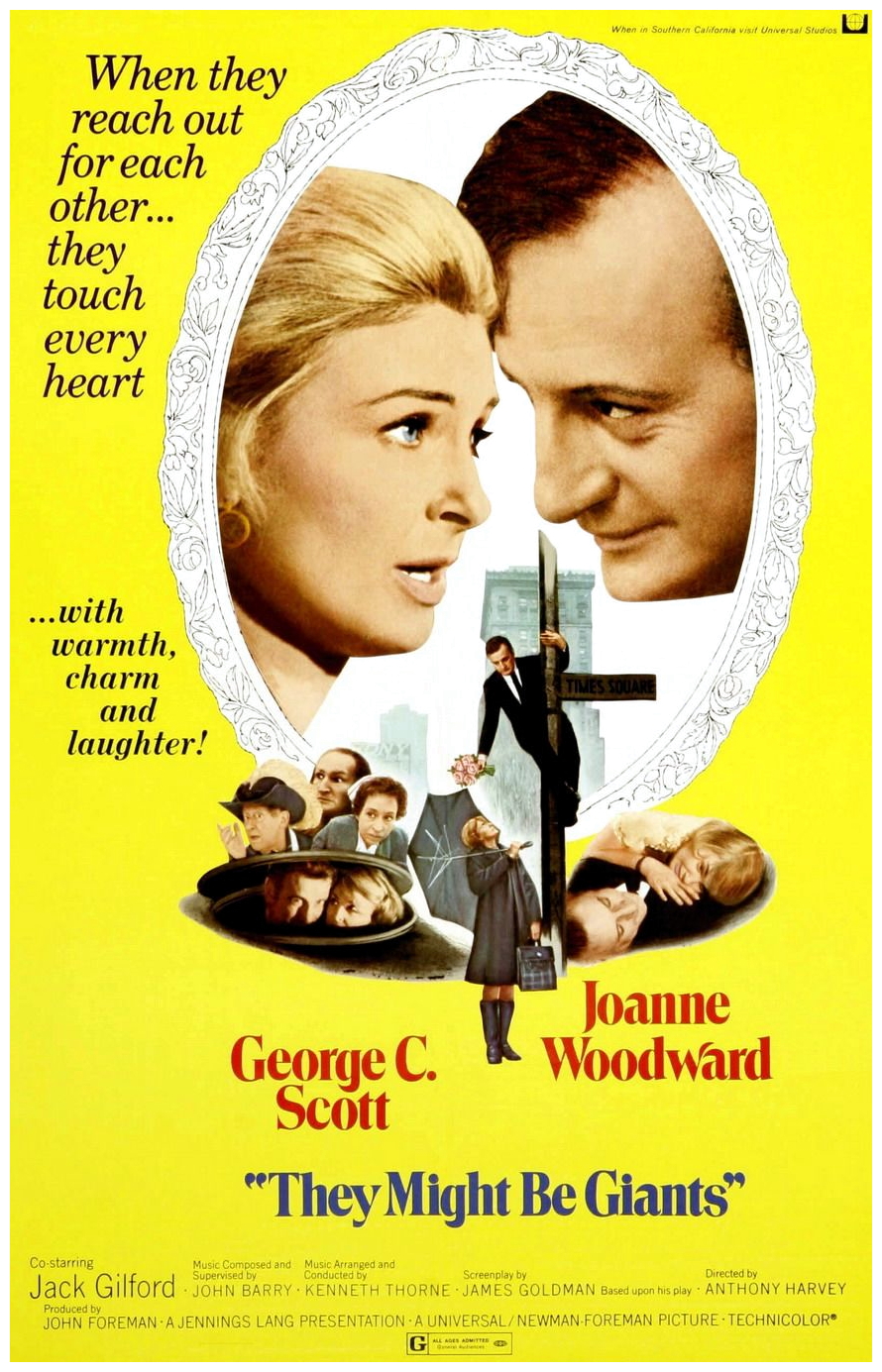