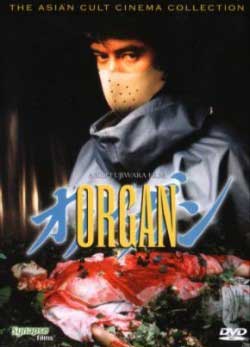 Two undercover detectives investigating a black market organ harvesting scheme find themselves in trouble when the black market criminals find out who they really are. One detective is able to escape but the other is left behind and subjected to a variety of horrible things. The detective that was able to flee vows to find his missing partner and exact his revenge on his abductors. Will our hero be able to save his friend and punish the ones who took him or his he doomed to suffer the fate of ending up on their operating table?

I love most Asian horror films. There are so many great ones (“Audition”, “Battle Royal”, and “Death Bell”) and ones that are just so-so (“Heirloom” and “The Wig”) and a select few that are just bad (“Cello” and “Pray” are a couple that come to mind). I would say that the movie “Organ” falls somewhere between the categories of so-so and bad.

To be honest I really didn’t have a clue what was going on for most of this movie. It is all over the place and there were many times that I sat there scratching my head as I was confused as to what direction this movie was going. It almost seemed as though it wanted to go in one direction but then it took another turn and just got more confusing and even less interesting.

I wasn’t sure why some of the characters had these huge, pus-filled growths on their bodies. I also wondered why the hell the kind of hot chick wanted to screw the man with the big ugly growth. These were just a couple of instances that confused the hell out of me. If you are a fan of films that make sense I would recommend staying away from this film.
In addition to being very confusing, “Organ” was also pretty boring at times as well (also it was way too long). There are many parts when nothing is happening and I did everything I could to keep from falling asleep while watching it. There is a serious lack of interesting events within this film and as a result I had a lot of trouble really getting into this movie. To be honest the only time I was really into it was during one of the many gross-out scenes, but even those got boring and redundant after a while.

I also really didn’t like any of the characters; our “hero” wasn’t really likeable or relatable, and that goes double for his partner. The villains are pretty lame as well (especially the doctor) and none of them were the least bit intimidating. I don’t think that there was a single character that I really liked, which is an ominous sign for a movie. I really believe that if you don’t care about the character that you couldn’t possibly enjoy or get into such a film.

I guess the only thing I really dug about “Organ” was the over-the-top gore. I read a lot of information online about how this was one of the sickest, most repulsive movie ever made but I’m afraid I have to disagree. Yes, there are some very gross scenes but it wasn’t nearly as hard-core as some viewers made it out to be. I’ve seen a lot more repulsive flicks and even though I enjoyed the gore here, I couldn’t help but be just a little disappointed in it at the same time. I blame it on too much hype!

I really wanted to like “Organ” but had a great deal of trouble getting into the plot. Some people may love it but, personally, I thought it was boring. It was a little too long and it was seriously lacking in the action department. If you are in the mood for a good Asian horror flick then I wouldn’t suggest this film.

Pick up the film “Organ” at www.synapse-films.com/