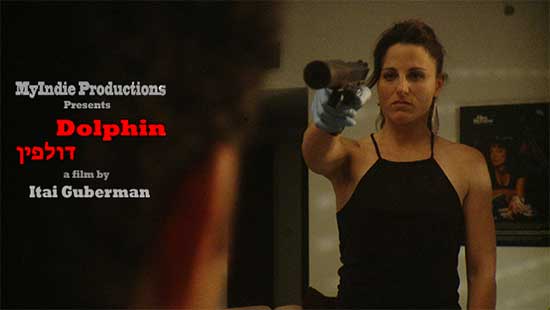 A man returns home with a woman after a successful blind date. But little does he know, he’s in for a long night.

Don’t ever tell Itai Guberman, CEO/Founder of MyIndie Productions (with partner Asaf Angel), that he cannot do something. It just fans the already burning creative fires to a white-hot inferno as he sets to prove you wrong. The result of this dare ended up in the production of a compelling study of rape, forced atonement of sins and the cost of revenge done on a minimalist scale called Dolphin. “It came as somewhat of a dare from a lecturer of mine (at university)”, Guberman told me via interview. “I hate being told I cannot do something.” Thus, from the roots of a classroom project sprouted this short film stunner that was finally released, with a few bits of re-tooling, in 2016 and has enjoyed some success on the festival circuit (notably at the 2018 Red Phoenix International Film Festival where it walked away the winner for the Best Lead Actress award for star Inbal Eizenberg). It is also been upgraded to the finalist list for the prestigious 2018 ACAFilms Low Film Festival in Sao Paolo, Brazil to be held December 31st. Not a bad haul for this tiny little engine that could.

The plot, about a girl being raped after a party and a man (who may or may not be the alleged rapist) being held captive in his apartment three months later by a female assassin (who may be the victim’s sister), is a composition of one (with off-camera voicing of a second character) and two-person dialogue-driven set-pieces that fit nicely with the sparse, intimate settings and feel of the piece. The budget is listed at $3000 in a number of on-line sites, itself quite a pittance compared to the bulk of movie budgets going both then and now but, according to Guberman, it started and stopped mostly at a thousand bucks and only ballooned as a result of technical issues and circumstances beyond control. “The reason this cost $3k was that we had to shut down the shoot when we lost the location halfway through the process. I then rehired equipment, catering, crew, cast, etc, for a second shoot at a friend’s apartment. Six hour later, we had all the footage we needed. All that “blew up” the budget to $3k.” Guberman actually puts the final budget at about $2000 (the equivalent of $8000 Israeli Shekels in currency exchange). 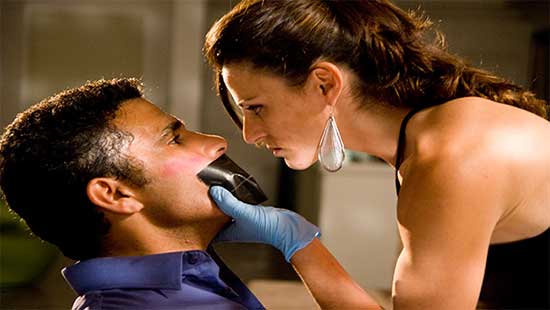 The lack of budget forces the focus onto the three main characters and strips down to the raw soul of each with an immediacy, unlike the bigger studio efforts that use the more casual, deliberate laying out approach that can, on occasion, lose impact. Part of the success in gaining the viewer’s attention here, when big budget action and cgi aren’t around to assist, is Guberman’s knack for insightful, incisive dialogue. There are no incidental throw-aways, little in the way of preamble (though that, admittedly, may largely be the result of the runtime being only 13 minutes!) and every word has a blunt meaning. The lady captor using a precise delivery for “three months and three days ago. June 16. Where were you?” even as she presses the gun and silencer to the man’s head. Cool, collected and to the point.

It is an intriguing concept the director opts for in using two different types of violent encounter that share both the undercurrent of control being ripped from a person and the same two types of parties (albeit in a role reversal) in victim and victimizer. Take the rapist and put them in their own nightmare where they are rendered powerless and subjugated via torment. The Modus Operandi may be different but the results are brutally similar. The basic theme of power reversal emanating from a sexual assault was explored also in Robert M. Young’s searing 1986 drama Extremities (based on William Mastrosimone’s play and starring Farrah Fawcett), but Dolphin stands alone by making the thrust of the story as much about role-reversal and taking away power as it does a revenge motive.

My only fault with Dolphin is that my sense of being left wanting more from the story and characters was only heightened by its 13-minute brevity. I felt the opening bits with Galit, nicknamed Dolph by her sister due to her fascination with Dolphins (hence the film’s title), were somewhat malnourished. Indeed, there are flashes of sensitivity and beauty to her character (as much due to Daria Ilein’s deft performance as Guberman’s script), but I kept asking the questions in my head: Who is she? What’s her background? How did she come to be at the party? Imagination and mind’s eye work wonderfully but sometimes can use a little help! The same went for Asaf Angel’s Erez. A bit more into his life story and how he came to view women to be targets of sexualized violence would help flesh out his player in this and, perhaps, help the audience invest even more emotion into the events. Boiling down to giving me a reason to hate him that much more and sympathize just that level higher with Galit.

Guberman is helped by a nuanced, skilled trio of stars here. I say nuanced because the restrictions of a short film can often require actors to have only a brief amount of screen time (and very little backstory to help) to imbue their characters with even the slightest dimension or depth. Especially Daria Ilein, who has but one scene on-camera (two, if you count the blackout moment with her in the ambulance) to make her part come alive at all. Just the reflective look and soft vocal tone exuded as she pulls the dolphin pendant out that her sister gave her, speaks volumes about the personality Galit has. Angel is solid as Erez, exploding with both rage and fear as his grip of control is loosened. I have to admit to being transfixed a mite by the sheer animation shown by his face. For theatre students out there, look to this as a how-to in luring the audience in. Charisma and energy are a vital foundation in bringing life to paper descriptions. As for Eizenberg? Well, the Red Phoenix award for Best Actress tells all. Her coolly detached assassin is an expert study of tightly-controlled rage and sense of disconnect that few performers can pull off as effortlessly. There is a point during the final moment of the seduction of Erez, prior to his being handcuffed and bound to his chair, where Eizenberg lowers her head as if ready to perform an oral sex act and then looks up with a gaze of pure seething anger that chilled me on the spot. Gone was the playful wildcat, a raging lioness in its place. Conviction of a cast is crucial to selling a story to the filmgoer.

I suppose, though, that having a lone flaw of leaving the movie-goer wanting more be the result of a paltry budget leaving a miniscule runtime as opposed to a lack of talent or skill from the production crew is not really a bad thing. It’s the old “This is good! Give me more!” cry if anything else. Here’s to hoping that Dolphin gets its feature day in the sun very soon! In the meantime you can find information on the film at the MyIndie project page at myindieproductions.com/dolphin-2/ and treat yourself to a viewing of short through the AngerMan Distribution Vimeo On Demand Channel at vimeo.com/ondemand/155001. It is well worth it.