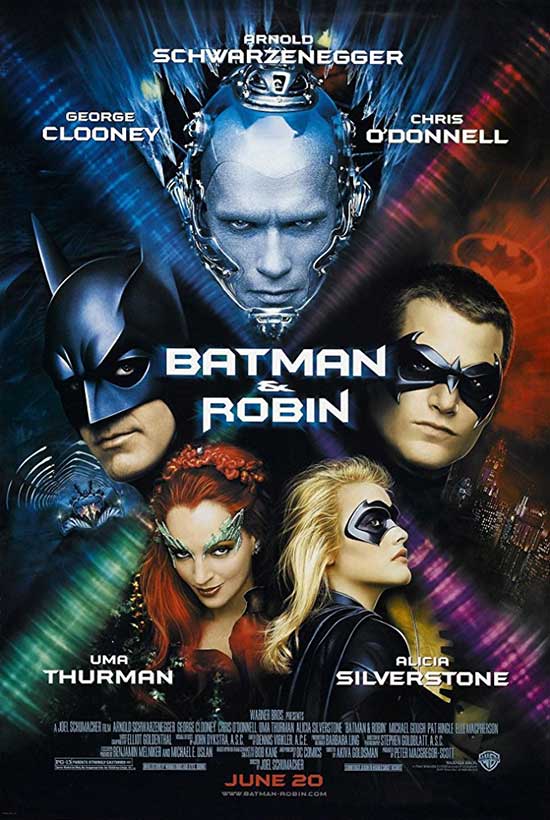 Batman and Robin try to keep their relationship together even as they must stop Mr. Freeze and Poison Ivy from freezing Gotham City.

This is one of the few times where the film I have to review is not a B-movie. It was actually a big budget movie with a A-list cast of actors. However, the end result was so very, very, terrible. In fact, in this case, the awfulness is the stuff of legends. It nearly killed any interest Hollywood had in making comic book movies, and had killed the Batman film franchise for several years. The director and lead actor both have repeatedly apologized for being part of this celluloid whirlwind of suck over the years.

What is this cinematic pile of dog crap you may ask? Why it’s none other than 1997’s Batman and Robin. The film follows Batman struggle with a growing rift between himself and Robin while dealing with the villains Poison Ivy, Mr. Freeze, and Bane. Adding to his woes is that his faithful butler, Alfred, is gravely ill. To top it off, Alfred’s niece has come by for a visit, and her own nocturnal activities could cause her to cross paths of the Caped Crusader. 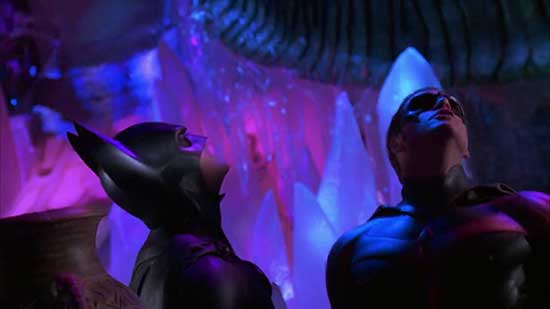 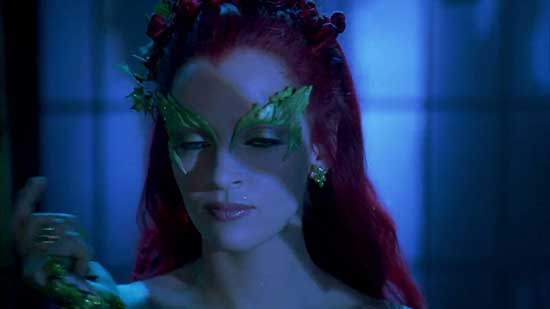 Of all the movies I’ve had to review, this one I think caused the most pain. It got so bad that 15 minutes in I had to take a break and do something else. Like bathing my four dogs. So for the rest of the day, my dogs were ticked at me. So thanks for that, Batman and Robin. I also ended up vomiting because of acid reflux flare up the resulted from the physical website, to which my friend said: “That’s probably the best review the movie ever got.”

After Tim Burton’s Batman Returns, Joel Schumacher took over directorial duties for the Batman franchise. With Batman Forever, Schumacher started to veer away from the darker aspects of Batman and started to make the Dark Knight campy like the classic Batman television. series from the 60s. He did this despite the fact that both the character and audiences had grown past the silliness of Adam West’s version of the iconic character. With Batman and Robin, Schumacher and writer Akiva Goldsman stopped bothering to be remotely true to the character and went full cornball. Half the characters barely resembled the comic versions, and everything was made too silly to take seriously. Batman was no longer the brooding vigilante that used fear as a weapon. None of the villains were treated with any form of respect either. Instead of being the damaged and sometimes tragic characters that they were, they instead were just exaggerated caricatures. It’s obvious that neither the director nor his partner in crime, the scriptwriter, bothered to pay attention to anything that made Batman of the modern day who and what he is. It’s debatable if they ever read or watched anything about the Caped Crusader post-1960s. 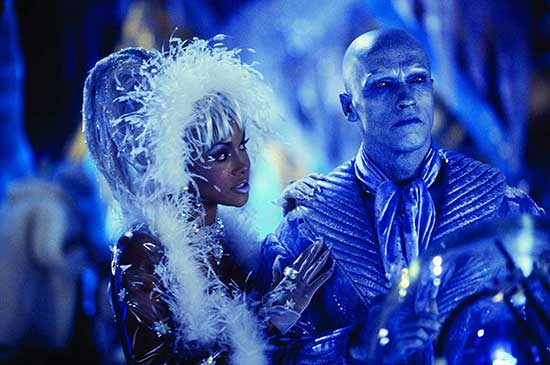 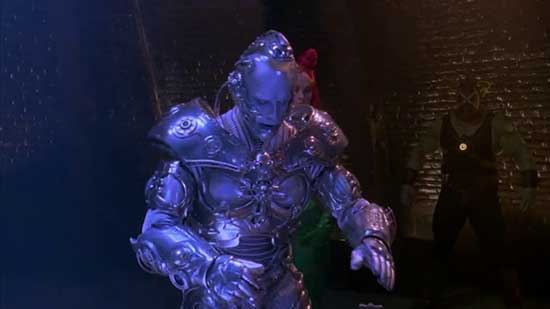 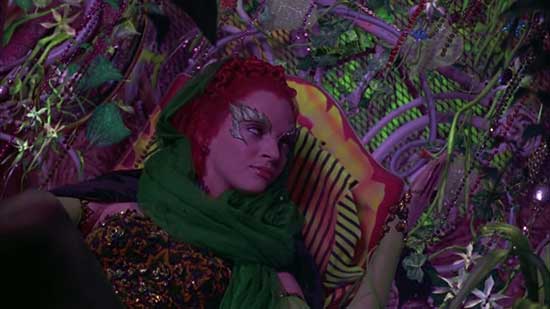 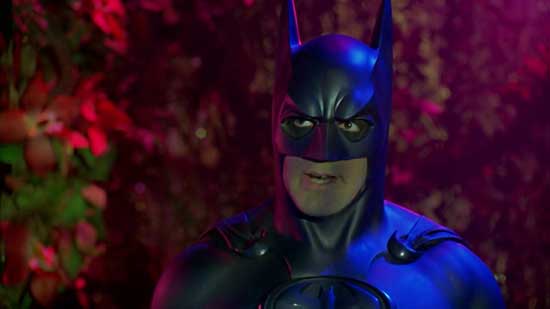 After watching this dogpile, I found it hard to believe that Akiva Goldsman is an Oscar-winning screenwriter. The dialogue was completely pathetic, filled with puns so bad that they made me groan. I love bad puns, don’t get me wrong, but the ones this movie subjects its viewers to (though one might call the audience victims instead) are embarrassingly terrible. I almost felt shame on behalf of the actors who were forced to delivery anything Goldsman wrote. Goldsman also didn’t seem to care about things like logic since his script having plot holes big enough to pilot an aircraft carrier through.

The set designs overall were eyesores of the highest degree. Instead of capturing a dark, gothic, aesthetic that is commonly associated with Gotham city in comics and Tim Burton’s own two Batman movies, the filmmakers here decided to make everything look like a gaudy eyesore filled with bright neon colors. It’s like someone threw up part of the fashion sense of the 1980s directly onto the film reel. There’s absolutely no subtlety in any designs here and everything is a migraine-inducing nightmare to gaze upon. The only time things appear normal is when we’re seeing our main characters interacting at Wayne Manor. It’s sad when the most normal setting in the film is the lavish abode of a billionaire. 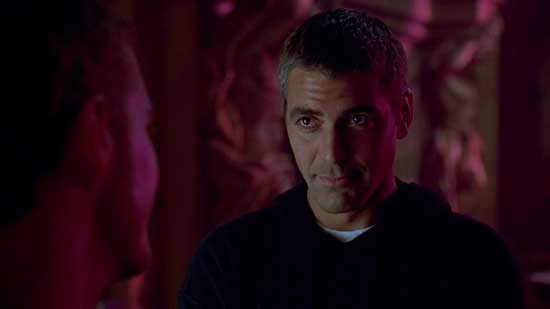 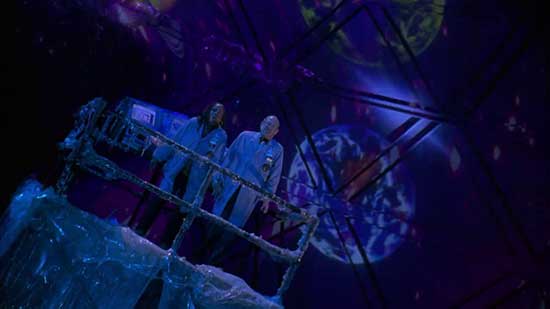 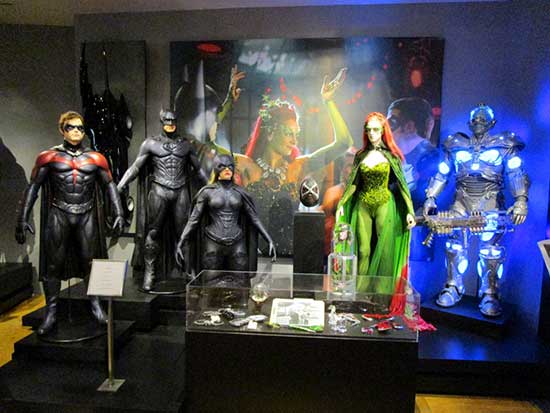 With some genuinely talented people to fill out the cast, you’d hope that maybe some of the acting would at least be adequate. Unfortunately, that is not the case. George Clooney as Batman barely registers as being alive in his performance, and Chris O’Donnell was just annoying and pretty much one-note the whole runtime. Uma Thurman was just pathetic and misused, and Alicia Silverstone continued to turn in the kind of performance you’d expect from her if you’ve ever seen her in anything else (basically, she’s just awful). The best performance was a bit part played by the always wonderful John Glover. Of the main cast, however, the only other actor I enjoyed in this turkey was Arnold Schwarzenegger’s turn as Mr. Freeze.

Schwarzenegger has never been a great actor, and you’re not going to see him show some untapped acting potential here. He was also horribly miscast as this character, and his portrayal reflected none of the menace and tragedy that so defined this Batman villain. However, what made him enjoyable is he seemed to be the only person that was having fun throughout the whole film. He had some of the worst puns and jokes in the movie, yet he managed to make them almost work through the sheer power of his charisma and line delivery. He was one of the few things where he managed to be both intentionally and unintentionally funny. 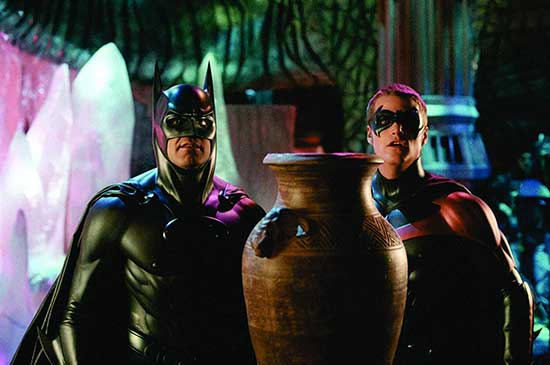 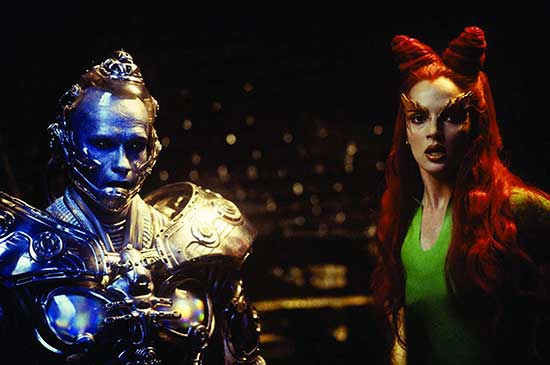 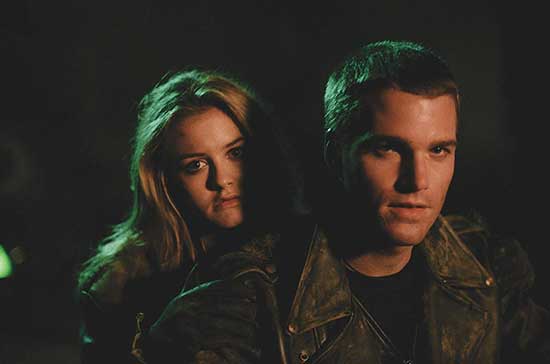 Sadly, Arnold’s amusing turn isn’t enough to recommend sitting through this film. I understand it does have a cult following because of how bad it is, and I can see why. When a big budget movie like Batman and Robin turns into a trainwreck of this magnitude, it’s strangely fascinating. However, if you’re a fan of the character like I am, this flick is a freaking abomination that should be burned from history. It should be thrown in a rocket and shot directly into the sun before some unsuspecting child accidentally comes across and watches this horror. Want to know why I don’t think we’ve ever been contacted by alien lifeforms? Because they probably saw this movie and thought “Well, these people are hopeless.” and went back home.

Avoid this movie and save yourselves.