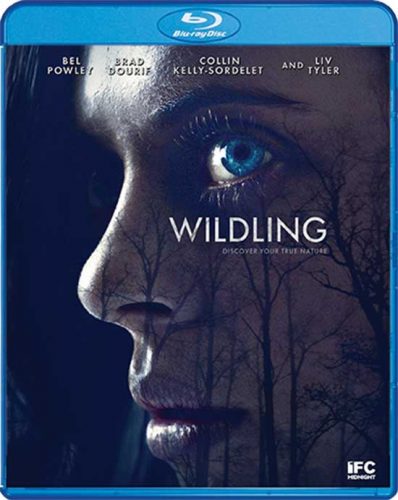 A blossoming teenager uncovers the dark secret behind her traumatic childhood.

There are several defining characteristics that tell you when you are watching cinema of the bizarre. In some films it’s a pre-credit dream sequence, perhaps, followed by distorted visuals of the fish-eyed lens variety and shots that make little sense unless you are under the influence of something obtained via liquor store or back alley. I would also add that, if certain actors such as Brad Dourif pop up, gleeful weirdness is sure to follow. And Dourif does play a role, a major one, in first time feature helmer Fritz Bohm’s 2018 effort Wildling, a distinctly original take on the female puberty cycle meshed with a different spin on the werewolf formula.

A young girl, Anna, is mysteriously held captive in the rural home of a man she knows only as Daddy. Daddy regales the child with horrifying tales of a creature he calls the Wildling, on the loose in the surrounding forest and feeding, as Daddy claims, on local children. This, along with an electrically charged doorknob, sufficiently serve to dissuade her from any desire to leave. Years later, after she turns 16 and is witness to a suicide attempt by the elder man, she is rescued by local sheriff’s deputy Ellen Cooper and placed into Cooper’s temporary custody. But Anna begins to exhibit unusual body changes as she goes through the cycle of pubescence. Is she just becoming a woman, or something decidedly more?

Bohm knowingly plays with the age-old werewolf theme by de-emphasizing or even eliminating many of the dusty old tropes that come with the formula. Gone are silver bullets, pentagrams and curses. In fact, he really downplays the creature feature aspect, overall, in favor of exploring a young girl’s coming of age. It’s this facet that most intrigued Bohm about the project. He says as much in an interview with the site Nightmarish Conjurings back in April of this year. “It didn’t start as a creature film, instead it started as a story about a girl becoming a woman. It was about that strange phase in life we call puberty; where you find yourself at odds with the world. The fantasy element was to take that human experience of puberty a step further by playing with the idea of the biological process.”

So the wolf beast is around as much for a plot contrivance as it is to thrill and chill the audience. Certainly something of a stepping out from the stalk and munch fare so often done. And it plays very well in this instance. With Bohm playing up the drama over the creepshow in the beginning, it serves as a tonic of complacency that leaves the viewer ill-prepared for when the jarring kill scenes come later. As if he’s purposely lulling the audience into a semi-sleep before throwing the bucket of ice water in their collective face. Bohm takes another unique spin by having the central monster be female as opposed to male. While horror movie history hasn’t completely avoided the idea of wolf women (The Howling series for one example), it also hasn’t fully embraced having it on a regular basis either. Bohm opined on this, again with Nightmarish Conjurings. ”

That was exactly the reason, because there are so many male driven creature features out there.  It seems like the females are always the damsel in distress or the girlfriend at the side of the hero and  I feel like it is time to change that.  Even though there have been female creature films we just felt like there’s a fresh angle here to explore, an area that hasn’t been shown much yet.  By slipping into the skin of our main character we are really trying to create a film that is entirely from her perspective and we want to put the audience into her subjective experience with what’s going on in her body.” By allowing the moviegoer to see full on her painful changes, the director coaxes us into investing a sense of caring for the character that morphs to concern for her plight as film goes on. You feel a real sadness for her that becomes nearly palpable as events unfurl. It also seems to cause an opening for Bohm, who co-wrote the story with Florian Eder, to put the usual boo and hiss villain target on its ear. The reprehensible type award goes to Dourif (and a few local cronies) who seem more bloodthirsty than any lycanthrope could possibly be.

The striking scenery of the picture comes courtesy of some nice location work in and around a house at Water’s Edge in the small town of Congers, just north of New York City. Other filming stops included the Bronx Zoo and river, the town of Sleepy Hollow and Rockland Lake State Park in Manhattan. Though densely wooded locales are somewhat commonplace in horror films, photographing them in a way that gives a languid, disturbingly still life of its own to the setting is still an art form that not many can achieve. Credit is due to both Bohm and Australian award-winning cinematographer Toby Oliver (DP on two 2017 chiller gems, Get Out and Happy Death Day) for the lush look Wildling sports throughout.

Bel Powley truly stuns in the lead role as Anna. Scared, confused, and eyes filled with wonder as to her life and destiny. Yet an undercurrent of quiet strength to propel her through to the end. A study in raw vulnerability that she carries over from her electrifying turn as the titular role in Carrie Philby in 2016. Liv Tyler, no stranger to fantasy or horror, acquits herself nicely as Ellen Cooper, the heroine/deputy who takes in Anna and tries to bond with the confused and scared young lady. Her cool, impassive look is a perfect fit for the tough cop role assigned and, yet, there is a hint of softness on the edges to humanize her just enough for depth. Brad Dourif, as Daddy, has psychosis down pat, letting those bulbous eyes and soft vocal delivery do most of the work.

The conviction that he gives to eccentricities is what pulls the role over. It was fun to see James Le Gros as “The Wolf Man”, a mountain guy who’s a seriously more demented and hard-edged version of Dan Haggerty’s old Grizzly Addams for tv back in the 70s. The one guy where you would almost prefer to meet a mountain lion rather than him if you’re lost in a forest. Le Gros has been doing the character part game in films and tv since 1984 and still seems to be having the most fun burying himself under makeup and amongst the colorful backdrop. Whether it was as Roach in the 1991 Point Break or the reformed con Howard in 1995’s Gun Crazy, I’m not sure there’s a scuzzy type that he hasn’t completely embraced as an actor.

To coin a phrase Jack Palance once uttered weekly on the 80s show Ripley’s Believe it or Not!, if you’re looking for something in the realm of “the strange…the bizarre…the unexpected” look no further than Wildling. A twisted and refreshing take on Lycanthropy, menstrual cycles, and coming-of-age romance that will have you hopelessly under its spell. How weird is that, you ask? It has Brad Dourif in it. Enough said.

Check out Wildling on bluray per Shout Factory