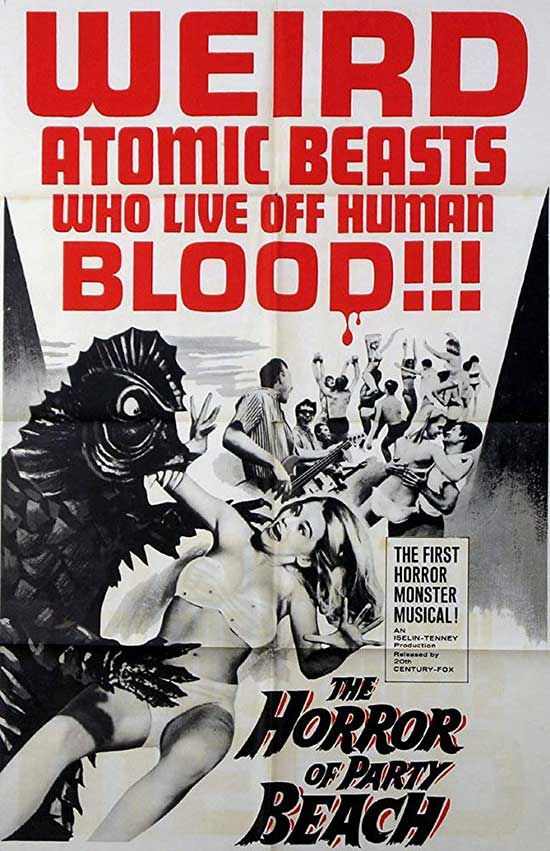 In The Horror at Party Beach, a boat off the coast of a beach town is dumping toxic waste into the ocean, which comes to rest on human skeletal remains on the seafloor. This causes the old bones to generate new flesh and become half-man, half-fish mutants that go on a murder rampage. It’s up to a science professor and his assistant to find a way to stop the teenage mutant rubbery fishmen before they kill the town’s population.

You know a movie is in trouble when you immediately are unable to recall huge portions of the film once it’s over. That usually means that the movie was so boring that your attention wandered for most of the runtime, or it was so bad that your brain’s defense mechanisms are trying to repress the memory of watching it. In my case, I’m beginning to suspect it’s the latter. As soon as the end credits rolled, I struggled to recall any details of the film. I should have listened to the little voice in my head telling me that I would regret trying to remember anything of The Horror at Party Beach. My own stubbornness to make sure I had something coherent for a review (assuming that my work is coherent, that is) forced me to delve into the depths of my memory. 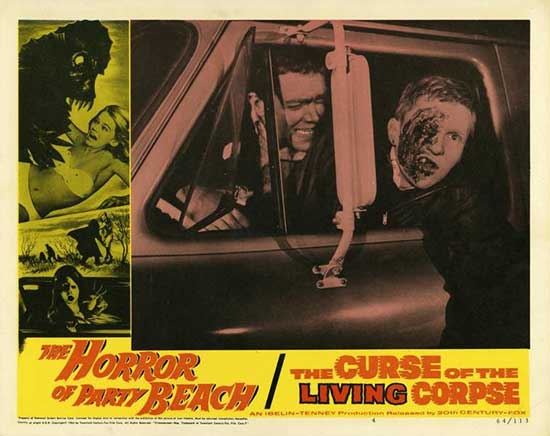 The voice in my head was correct. I did regret my decision.

The movie is just filled with so many ridiculous details that makes the thing funny for all the wrong reasons. We have actors clearly in their 30s cast as characters in their early 20s, and the cast gives performances that are worse than first-year drama students trying to perform Shakespeare while inebriated. The mutant murderous fishmen were pathetic looking since it was obvious they were just guys in rubber suits wearing what appears to be paper mache masks that were as realistic looking as showroom mannequins. It was hard to take their appearance with any degree of seriousness, especially when they have all the speed and agility of a comatose turtle.

Of course, being a movie from the ‘60s, it does try to add some vague morality to the tales by having the victims normally be the people that more freely flaunt the traditional values of mainstream America. So basically, if you were a woman who wasn’t chaste and wore conservative clothing, you were soon to be a victim of the monsters. Same with anyone that didn’t act “acceptable” norm. If you were a party having a beach party and wearing skimpy swimwear, you were most likely doomed. However, the survivors at the end of the movie were, of course, the ones that followed conservative American values. Not only was it trite message even in the 1960s, but it bordered on insulting by implying that not conforming to social norms is some kind of sin. 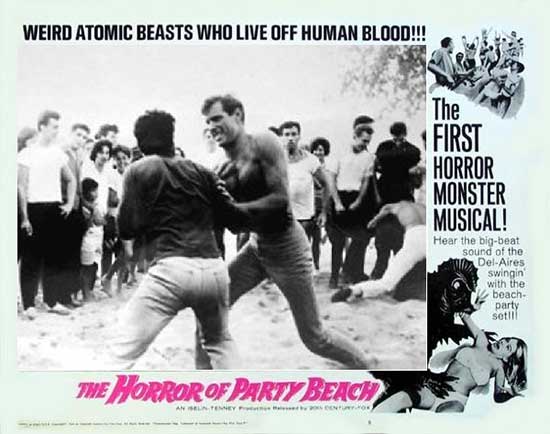 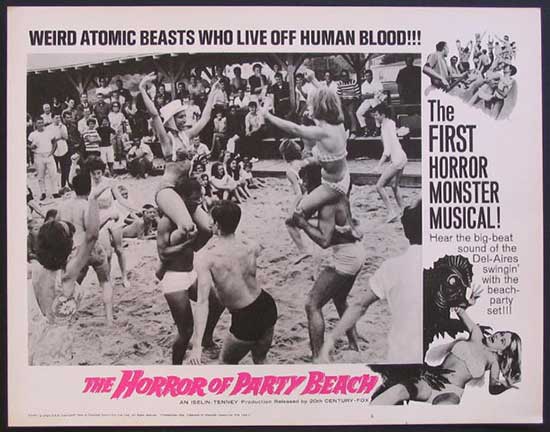 Then there’s the racism. We have the African American character Eulabelle, who works as a maid to Dr. Gavin, the main scientist in the film. Eulabelle was a repulsive stereotype common in movies of the era. She was there just to jabber on about a possible supernatural reason for the fishmen and be in near hysterics at all times as events unfold. She’s treated with a certain level of condescension from the white characters for the majority of the film. It was so bad and patronizing that I half expected to see one of the other characters pat her at the top of the head. It’s a more subtle, and one might argue more insulting, form of racism. The fact that she is the person that accidentally leads the main characters to find a solution to the problem is the only reason why she’s there. While the way her character is handled in this film may have been seen as more acceptable in 1964, it’s woefully inappropriate in the present. 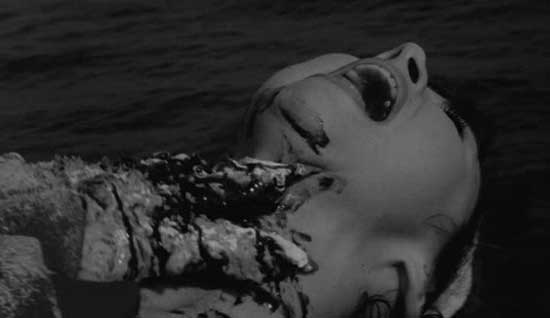 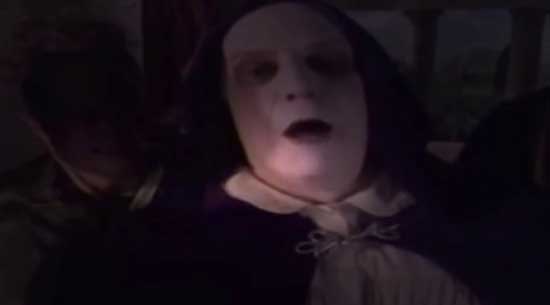 My gripes are plenty, and to list them all would make this review too long. However, I can’t let the absolute ridiculousness of the film’s concept go unaddressed. This movie wants us to believe that nuclear waste can somehow bring a skeleton back to life as some kind of mutant fish-man hybrid. In the 1960s a lot of storytellers seemed to think of radiation as some kind of scientific version of magic. Just to give you an example, just look how many Marvel super-heroes got their own powers from exposure to radiation. Nonetheless, the situation here just seems far sillier than most. Maybe the fact that I live in the 21st century where the true effects of radiation are more widely known makes the core concept of this film a hard pill to swallow, but I’m still wondering how anyone living 50 years ago didn’t laugh this turkey out of the theater. It’s just too silly for words. 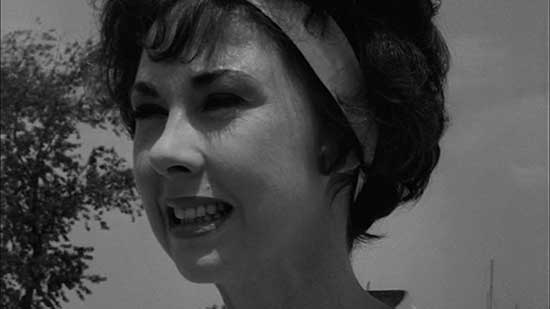 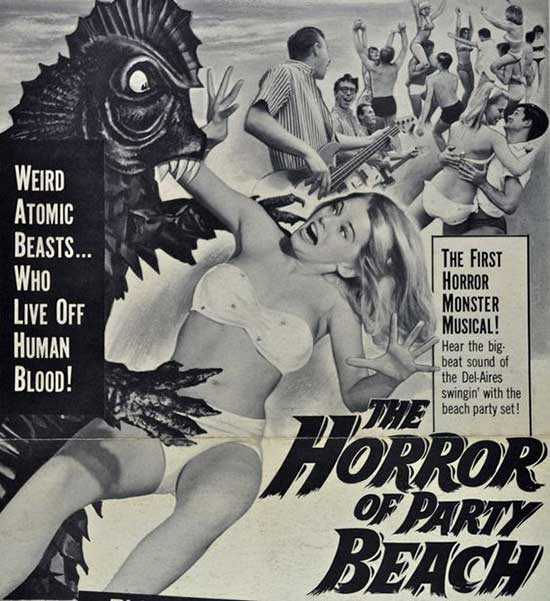 It felt like director Del Tenney was trying to capture the attention of both fans of the beach party movies and horror movies. However, the finished product never properly connected the two genres into one cohesive whole. What he gave was just a silly mess of a film with a rather insulting moral message about conformity just under the surface, some racism, bad effects, and even worse acting. It’s a horrible movie that’s not worth your time. Luckily, the copy of the film I was asked to watch was an episode of Mystery Science Theater 3000, so listening to Mike Nelson, Tom Servo, and Crow T. Robot skewer this crapfest made it tolerable. It’s truly the only way to watch The Horror of Party Beach. Otherwise, stay far, far, away.