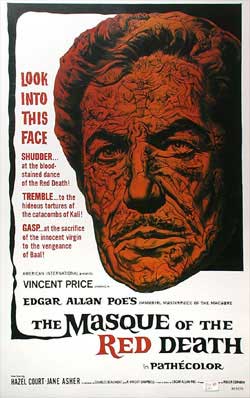 A day of deliverance comes via a cryptic prophecy to the Italian village of Catania in the plague form of the Red Death. The truculent and Satanic Italian Prince Prospero steals a beautiful peasant girl and her lover, and holds them captive in his stronghold. While inviting all the Nobles from the surrounding region the Prince holds a grand ball. Make no mistake it has been made clear…be thankful you have been granted protection from the red death! An adaptation from the Edgar Allen Poe short story, The Masque Of The Red Death is full of haughtiness, Satan worship, and sheer terror!

The Masque of the Red Death’s title sequence opens up in the similar fashion that all 60’s culty midnights do. Strong music, vintage backgrounds and colors that are a warmth to so many. What is interesting about this film is the first scene absolutely confirms that this picture shall be considerably more potent than other of director Roger Corman’s films.The Dark and strange tarot reading figure sitting amongst the foggy craggy forest assures this. 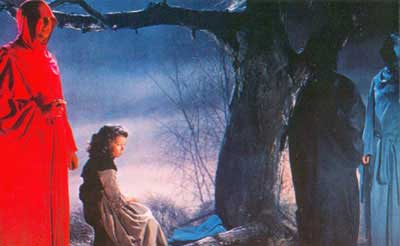 Price plays deftly the performance of the Satanic and overly haughty Prince prospero. I mean sincerely though, Price always gives a wonderful performance usually among extremely less gifted and charismatic actors. In this film though, the Actors all do a fine justice to Price’s vintage finesse. Jane Asher (Francesca) conveys a truly believable performance as an in-corruptable diamond in the rough with doe like eyes that seems to have “the perfect faith”. The character of Francesca proves to be quite the challenge for the Satanic prince. As in most roles where Price steals the show, he simply has no one in his way… no one who can vex his characters. That is what creates a true struggle for prince Prospero in this film. Prospero is ruthless, rude, and drenched in sin with seemingly endless power, semi obstructed by a “true Christian believer”. 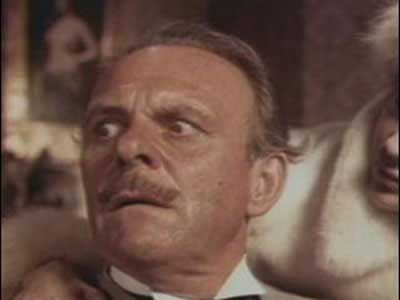 Actor Patrick Magee(Alfredo) gives a wonderfully sickening performance as Prospero’s strange bitch of a side kick nobleman. Alfredo is “not without influence and power” as he states, but wields power far less honed than Prospero. Magee’s character is constantly bathing in the notion of corrupting young women (usually far too young), the anatomy of terror, and dark power. Remember for these nobleman there are no rules and certainly no morals. Magee is simply disgusting, vile and creepy in his performance. You know an actor has done there job when you feel you need to bathe after witnessing their act. 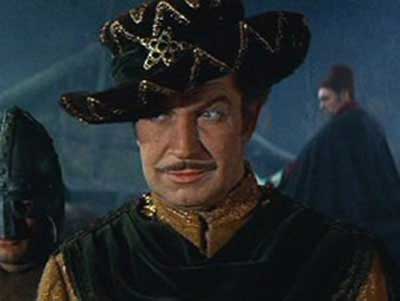 One thing you realize upon scene into the castle is this is a substantially greater budgeted film. Roger Corman has always done great with using the budgets he could work with. This film though has a grand ballroom, large costuming, vibrant colors and details which are lacking from most midnight greats. You are simply and believably immersed into this work without having to shrug off the usual and ever present campy nature of most cult predecessors. My favorite scenes in the Masque of the Red Death deal with the “colored” rooms which are bold and aesthetically pleasing to say the least. A real treat that I refuse to spoil for you. 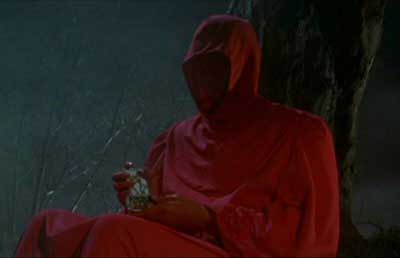 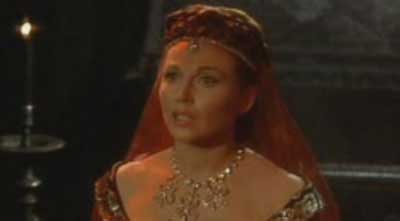 Finally lets not forget Actress Hazel Court(Juliana). She plays Prospero’s woman and student I suppose you could say. Hey… Prospero seems he could have as much of whatever he wants, beautiful peasant girls, and busomy polished nobility. Courts performance is extremely intense to say the least. Something which I am very fond of. You WILL NOT forget some of her more “burning” and “devotional” scenes. Well, this film tends to be my favorite Vincent Price and Corman collaboration. So many Edgar Allen Poe adaptations have been created but the honest truth is some of them are quite below mediocre. The Masque of the Red Death on the other hand will not let you down!