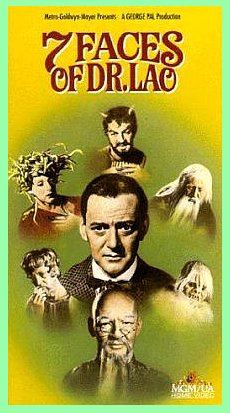 “An old Chinese gentleman rides into the town of Abalone, Arizona and changes it forever, as the citizens see themselves reflected in the mirror of Lao’s mysterious circus of mythical beasts.”

The early sixties were mostly years when proven formulas were being repeated, though the horror film was to hold a few surprises and, in Europe and Japan, a new generation of intellectuals was discovering the symbolic possibilities of horror and fantasy. Seven Faces Of Doctor Lao (1964) was produced by George Pal who – after more than a decade of science fiction classics including Destination Moon (1950), When Worlds Collide (1951), The War Of The Worlds (1953), Conquest Of Space (1955) and The Time Machine (1960) – was turning more to fantasy in his later years, his first true love. The film’s theme (the allegorical circus that comes to town and changes the lives of the inhabitants) has been quite popular over the years, and was based on the novel The Circus Of Doctor Lao by Charles Finney, which has much in common with the later novel written by Ray Bradbury filmed as Something Wicked This Way Comes (1983).

Doctor Lao’s circus magically appears in a Western town at the turn of last century, in which the people are about to vote on whether to abandon their homes and sell out to the rich and devious Clint Stark (Arthur O’Connell), who has told them of a forthcoming water crisis, but only he knows that the railroad’s coming to this town. Only newspaper editor Ed Cunningham (John Ericson) opposes Stark’s plan. Cunningham is also preoccupied with winning over librarian Angela (Barbara Eden with dark hair!). Everyone goes to Lao’s circus, meets the attractions, and is dramatically changed.

In what may be the finest performance in a fantasy film, Tony Randall (who apparently didn’t like the film) plays the mysterious Chinese Doctor Lao as well as six of his menagerie of mythological miscreants: Merlin, Apollonius, Pan, Medusa, the Abominable Snowman and the voice of the serpent. Depending on which character he plays, Mr. Randall is hilarious, wise, touching, scary, or sad – he’s always unpredictable. A librarian is seduced by Pan, a bullying wife is turned to stone, and local bad guys (Royal Dano and John Doucette) release a small fish from a bowl of water which grows into the gigantic Loch Ness Monster (animated by the great Jim Danforth, a former disciple of Ray Harryhausen). The sophisticated allegory of the original novel is cleaned up, de-sexed and reduced to uncontroversial down-home Middle-American moral preaching.

The fanciful script by my old friend Charles Beaumont is definitely not just for children. Chuck wrote several scripts for the classic Twilight Zone television series, including an adaptation of his own short story, The Howling Man, and Valley Of The Shadow in which a newspaper reporter stumbles upon a cloistered technological Utopia disguised as an ordinary small town in the middle of nowhere. Chuck also scripted the hilarious Queen Of Outer Space (1958) from an outline by Ben Hecht, deliberately writing the screenplay as a parody. The director was not made aware of its satiric intent, making the film even funnier. His screenplay for Seven Faces Of Doctor Lao is at times surprisingly subdued, thoughtful and philosophical. Chuck was much admired by his colleagues who outlived him (Robert Bloch, Ray Bradbury, Roger Corman, Harlan Ellison, Richard Matheson, etc.) and many of his stories have been re-released in posthumous volumes. I urge you to seek them out as soon as possible, but not before reaching the end of this review, of course.

Also worthy of note is makeup effects designer William Tuttle who won a special Oscar for his excellent work in Seven Faces Of Doctor Lao, seventeen whole years before Makeup Effects became an official Academy Awards category. In 1934, Bill moved to MGM where he supervised the makeup work in such movies as The Wizard Of Oz (1939) and Father Of The Bride (1950). He created makeup for many of Hollywood’s biggest stars including Judy Garland in Summer Stock (1950), Gene Kelly in Singin’ In The Rain (1952), Katherine Hepburn in Pat And Mike (1952) and Esther Williams in Million Dollar Mermaid (1952). Eventually Bill worked his way up to head of the studio makeup department, and in the fifties he became responsible for the makeup in Forbidden Planet (1956) and George Pal’s adaptation of The Time Machine (1960). In fact, he reused pieces he first created for The Time Machine in The Eye Of The Beholder, one of his many contributions to the original Twilight Zone. Later work included Young Frankenstein (1974) and Logan’s Run (1976) and, after an amazing career spanning most of his ninety-five years, William Tuttle sadly passed away of natural causes in 2007. 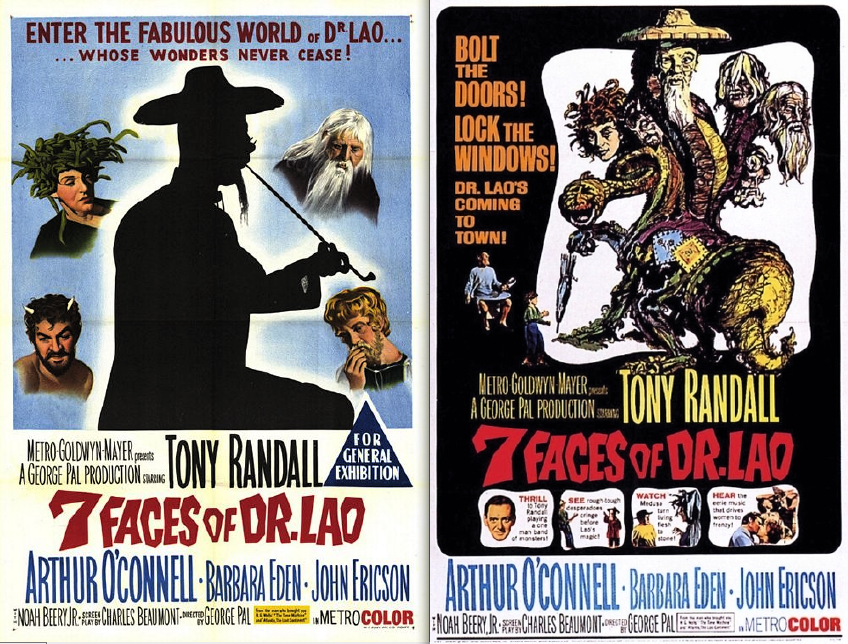 For the life of me, I simply cannot figure out why Seven Faces Of Doctor Lao doesn’t have more of a following. I’ll allow you to ponder this unanswerable question after I politely request your company next week when I have the opportunity to give you another swift kick in the good-taste unit with another terror-filled excursion to the back side of Hollywood for…Horror News! Toodles!