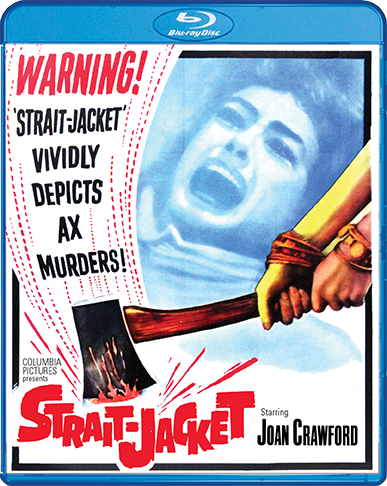 “When Lucy Harbin arrives early from a trip, she sees her husband with his mistress sleeping in her bed, so she kills them with an ax. Her little daughter Carol witnesses the murder. After twenty years in an asylum, Lucy is released by her Doctor Anderson and her brother Bill Cutler brings her back to her farm where he lives with his wife and Carol. Lucy meets her estranged daughter and she learns that she is going steady with the wealthy Michael Fields. Soon Lucy has nightmares and hears children singing a pejorative song about her. When Doctor Anderson unexpectedly visits her at home, she shows that she is unbalanced and the doctor decides to take her back to the asylum. However he is axed in the barn. Is Lucy killing again?”

REVIEW:
You’ve heard of Blaxploitation, Sexploitation, Ozploitation and a hundred other ‘ploitation’ words to describe a particular film genre, right? Hagsploitation is the term used to describe a sub-genre of the horror-thriller also known as Old Women In Peril, Grande Dame Guignol, Psycho-Biddies or, as critic Renata Adler called them, Terrifying Older Actress Filicidal Mummy movies. The genre began with Whatever Happened To Baby Jane? (1962) directed by Robert Aldrich, which relaunched the sagging careers of both its stars Bette Davis and Joan Crawford. The Billy Wilder classic Sunset Boulevard (1950) shares many similarities and can be easily considered as a precursor to the genre, but Whatever Happened To Baby Jane? set the trend and defined the genre: theatrical performances, wealth, old Hollywood, and psychologically complex melodrama. 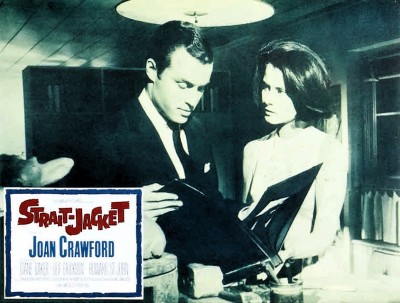 Baby Jane goes quite insane over the course of the film, torturing her crippled sister and venting bottled-up hostilities and guilt. By the end of the film, Blanche (Joan Crawford) makes a confession which details her own complicity in the whole affair. The film became a hit, garnering several Oscar nominations, including one for Bette Davis. After the success of Whatever Happened To Baby Jane? Bette Davis, Olivia De Havilland, Agnes Moorehead, Barbara Stanwyck, Shelley Winters and other aging actresses made numerous Hagsploitation films during the sixties and early seventies. Joan Crawford went on to star in producer-director William Castle‘s contribution to the genre, Strait-Jacket (1964), as the axe-murderer of her husband and his mistress. Free after twenty years in an asylum, she is reunited with her beloved daughter, now an adult, who witnessed the gruesome murders two decades before. 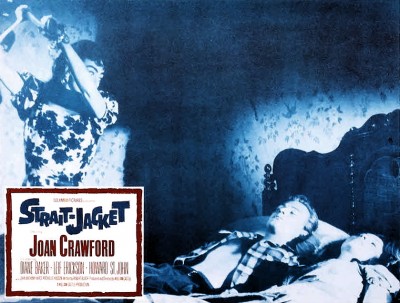 You remember William Castle, right? Skeletons dangling above the audience, cinema seats wired to buzz, fright-breaks giving cowards a chance to escape, insurance policies guaranteeing viewers against death by fright, etc. These and other outrageous gimmicks are the creations of a filmmaker with the soul of a carnival pitchman whose goal was to scare the pants off America. It’s a matter of debate whether the films he made lived up to that goal, but there’s no denying that the delightful promotional schemes he came with made teenagers in the fifties and sixties step right up in droves, and made him one of the most beloved figures in the history of cinema. Always looking for another bandwagon to jump on, Castle had seen the queues around the block for Whatever Happened To Baby Jane? and decided to get a piece of that particular box-office action. 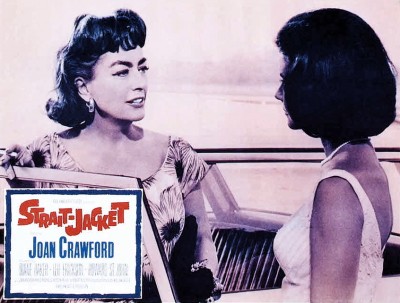 During the forties and early fifties, Castle was an efficient director-for-hire of B-grade thrillers, then went out on his own to make some of the best horror films of the era: Macabre (1958), House On Haunted Hill (1959), The Tingler (1959), 13 Ghosts (1960), Mr. Sardonicus (1961) and Homicidal (1961). After several failed attempts at comedy – Zotz! (1962), The Old Dark House (1963), 13 Frightened Girls (1963) – it was a welcome relief to all involved when Castle returned to his first best destiny with Strait-Jacket (1964). He hired original Psycho (1960) author Robert Bloch and instructed him to concoct a Baby Jane-style slasher and cast aging sex symbol Joan Blondell in the lead role of loony killer Lucy Harbin. Unfortunately, Blondell was injured at home prior to shooting and couldn’t fulfill her commitment but, luckily, it was about that time when Castle bumped into Joan Crawford at a dinner party and told her he had a script that was written specifically with her in mind. 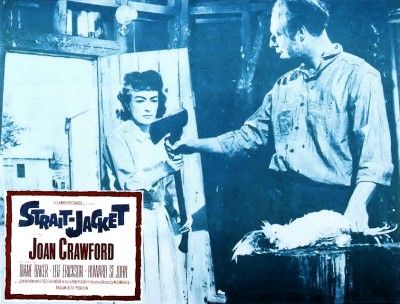 Crawford was always a notoriously tough negotiator and, although her popularity had waned in recent years, her deal-making skills had not. She demanded US$50,000 plus fifteen percent of the takings, as well as final approval over both script and casting. Leslie Parrish was first offered the role of daughter Carol, but dropped out saying that the mask she would have to wear during the climax would be too claustrophobic. Seasoned television actress Anne Helm was called in, but she was vetoed by a jealous Joan and the role was re-cast again with Diane Baker at Crawford’s insistence – they had worked together a few years earlier in The Best Of Everything (1959). Speaking of ‘jobs for the boys’ the role of Doctor Anderson was played by vice-president of the Pepsi-Cola corporation, Mitchell Cox. Unbelievably, Crawford arranged this without consulting Castle first and even insisted on Pepsi product placement throughout the film, including an entire carton of the stuff just sitting there on the kitchen table getting warm. 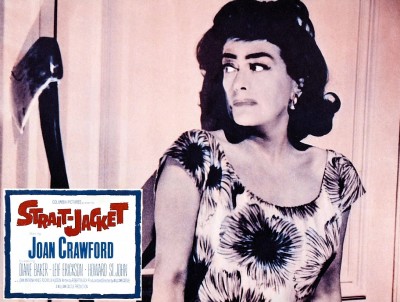 If it isn’t already too obvious, Cox was never an actor and Strait-Jacket is his only film appearance ever, but there are definitely some experienced thespians to keep an eye out for (ow!). George Kennedy, who is almost unrecognisable as the lanky farm hand with black hair, has appeared in more than two hundred films and television shows. He won an Oscar for playing Dragline in Cool Hand Luke (1967), but most readers will remember him as engineer Joe Patroni, the only continuing character in all five of the Airport (1970, 1973, 1975, 1977, 1979) disaster films, or as Captain Ed Hocken in all three of the Naked Gun (1988, 1991, 1994) comedy films. Strait-Jacket is also the movie debut of young Lee Majors as Lucy Harbin’s soon-to-be-axed husband – Rock Hudson asked Castle to find a small part for his 23-year-old friend. Majors is best known for his various television roles, such as Heath Barkley in The Big Valley, or as Steve Austin in The Six Million Dollar Man, or as Colt Seavers in The Fall Guy. 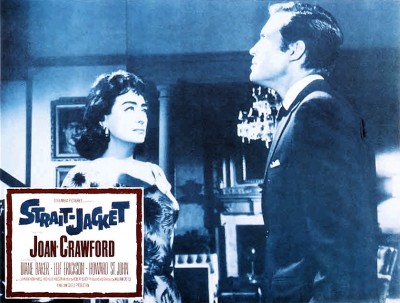 Character actor Leif Erickson, who plays Bill Cutler, was no slacker either, chalking up about 150 film and television appearances before passing away in 1986, including The Snake Pit (1948), Sorry Wrong Number (1948), Showboat (1951), Abbott And Costello Meet Captain Kidd (1952), Invaders From Mars (1953), On The Waterfront (1954), Tea And Sympathy (1956), Twilight For The Gods (1958), Roustabout (1964) and The Carpetbaggers (1964). Erickson also appeared frequently on television and, after appearing in two separate episodes of Alfred Hitchcock Presents, he starred in The High Chaparral as Big John Cannon, and guest-starred in lots of other television, including Rawhide, Bonanza, Gunsmoke, Marcus Welby MD, Medical Centre, Cannon, The Rockford Files and Fantasy Island. The last film I saw Erickson in was Twilight’s Last Gleaming (1977) in which Burt Lancaster plays a loony general who holds the USA to ransom with its own weapons of mass destruction. 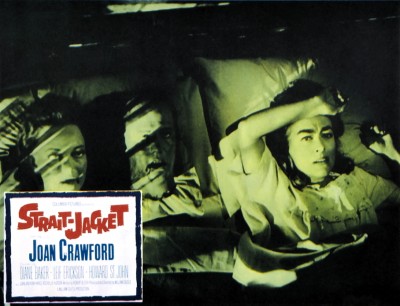 The storyline for Strait-Jacket was originally supposed to end with the scene in the house after Lucy has exposed her daughter Carol as the murderer, who starts monologuing madly about how she had planned everything, but the ever-jealous Joan insisted on an additional scene afterward in which she explains everything to her brother, thus the audience would be left with the final impression of Joan herself. The impression she left was certainly lasting, if not exactly glowing, listed in The Official Razzies Movie Guide by John Wilson as one of the most enjoyably bad movies ever made. Critic Judith Crist said, “It’s time to get Joan Crawford out of those housedress horror B-movies and back into haute couture – this madness-and-murder tale might have been a thriller given Class A treatment,” and Elaine Rothschild wrote, “I am full of admiration for Joan Crawford, for even in drek like this she gives a performance.” Other critics were not so kind, like Bosley Crowther, who stated, “Joan Crawford has picked some lemons, some very sour lemons in her day, but nigh the worst of the lot is Strait-Jacket – a disgusting piece of claptrap.” 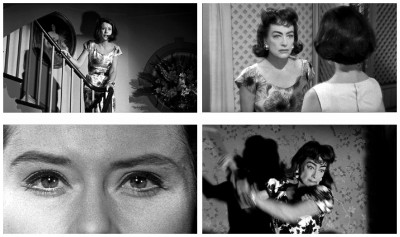 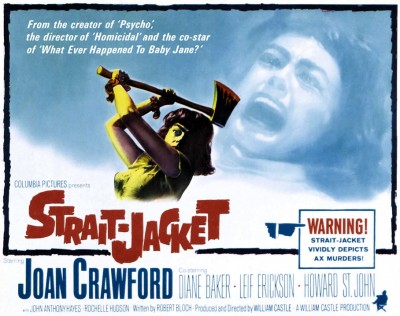 William Castle was a showman who is revered more today for the outrageous gimmicks he created to promote his films, than for the quality of the films themselves. He simply loved the show-business of movie-making more than the art, and brought to his work a kind of carnival pitchman’s zeal, which is why he and his films remain in the memory. Had he not passed away of cardiac arrest back in 1977, I have no doubt Castle would have become one of today’s most popular guests of honour at film festivals and conventions everywhere. It’s a role I’m sure he would have enjoyed and would have played it to the hilt. Please join me next week on Horror News when I have the opportunity of inflicting a pain beyond pain, an agony so intense it shocks the mind into instant mashed potato! Till then, Toodles! 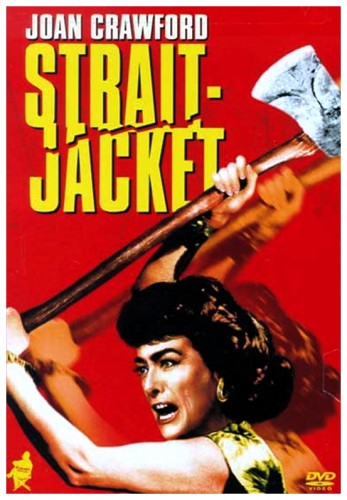 Strait-Jacket (1964) is Now Available on bluray per Shout Factory