Film Review: I Am Going to Kill Someone This Friday (2018) 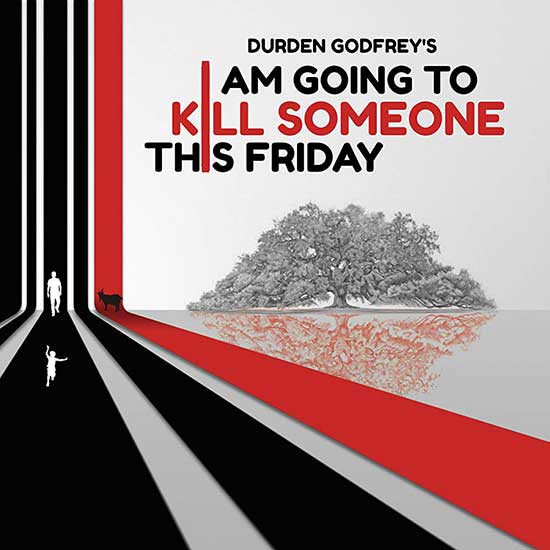 While I don’t intend to deliver up any spoilers, I want to make it clear that “I Am Going to Kill Someone This Friday” is a movie that really deserves a fresh viewing without much knowledge about what you will see. Your reactions should be your own, and I honestly believe this movie will get a reaction from damn near everybody who watches it, so proceed at your own risk.

Robert Partridge is a human time bomb. We drop into his world at 7:06am on a Monday morning as he stands staring at the shrill alarm clock. His face is that of someone awaiting a message, a human golem immobile until activated.

At the breakfast table, he is a pleasant tyrant to his wife and son. He carefully explains his displeasure at being annoyed before he has had his morning coffee in words that hit as hard as fists.

A neighbor’s dog, happily sitting in Robert’s yard, assaults Robert with barking as if he is unwanted on his own property, and Robert visibly restrains himself mentally.

Work fairs no better as he is instantly surrounded by coworkers as he attempts to catch his breath before the day begins. He even finds the daughter of a coworker hiding in the corner of his office at one point. A new boss has given him a lowly sock ad campaign to develop instead of the prestige hardware account he had been expecting, and the office douche gets the prime job.

Looks like a great time to start using cocaine again.

As each day counts down to Friday, we see Robert’s world, past, present, and future, as it slowly peels away his last hints of restraint. The only constant in his life is a fellow worker referred to as Mister Basilicus who seems to be there when he needs a bit of help, guidance, or a devil’s advocate, but even that guy tells Robert that he is psycho.

When “Kill Someone” starts, the scales are instantly tipped heavily in favor of an over-the-top nutcase going through the standard camera tricks to show how “disturbed” they are. Within the first 10 minutes, you find yourself not liking Robert. Yet the film slowly pulls back curtain after curtain to show you how he feels he was molded and forced into the life he now hates. He never becomes likeable but you do grow to understand his side of it all, flawed though it may be.

The plot veers into a number of sensitive subjects as it moves the characters along to their fates. There are obvious swipes at both liberal and conservative attitudes in politics as well as lifestyles. Robert is disgusted with the people he passes in the street as they are presented as little more than cattle endlessly masticating as they stare at their phones or potential threats to his increasingly fragile state of mind. At times, the scenes almost felt as if they were lifted from Joel Schumacher’s “Falling Down”, but the script does a fine job of making Robert’s descent into mental illness his own.

Even though Robert is the primary character, the film reaches out to show the lives of some of the people he comes in contact with. The neighbor boy looks for his missing dog. The girl who hid in his office has increasingly awkward conversations with her mother. Bobby, Robert’s son, is bullied during baseball practice, and his anger, fueled by his father’s inappropriate advice, grows as the big game approaches.   Georgette, Robert’s wife, realizes her life is a living Hell, but as long as her son needs her, she accepts her suffering as gracefully as possible.

“Kill Someone” has a dense script that requires performances that handle the unspoken changes and thoughts that go through the characters’ minds. Thankfully, the cast rises to the occasion. Tom Siedle takes the role of Robert and injects him with little quirks and habits that make him relatable while still creating a persona of pure toxic emotion that is unnerving in its instability.  Georgette as played by Traci L. Newman as a woman who realizes she is walking through a quicksand-infested swamp of a marriage with no light to show her the safe path, and she physically changes from stunning to a woman aged 15 years due to anxiety and fear. Everyone else fits into their roles well enough that you honestly feel like you are watching people from your own office and life.

There are times that the film almost became too much with the various attempts to show Robert’s altered reality. Fortunately, director Durden Godfrey spreads the visual glitches out enough that you get a break before hitting overload. Godfrey does an excellent job of basically immersing the viewer in a point of view that is almost alien by giving us enough of reality to make the insane bits fit. It would not be too much of a stretch to suggest that Godfrey has created a film that is almost a mental illness simulator; the images dig into your head to the point that you might find yourself agreeing with Robert.

“I Am Going to Kill Someone This Friday” may not be a perfect or even great film, but it does what few films have done in recent years; it worms its way into your head whether you root for Robert, pity him, or find him to be horrifying. Just do not expect a gore film, because this one is truly mental.