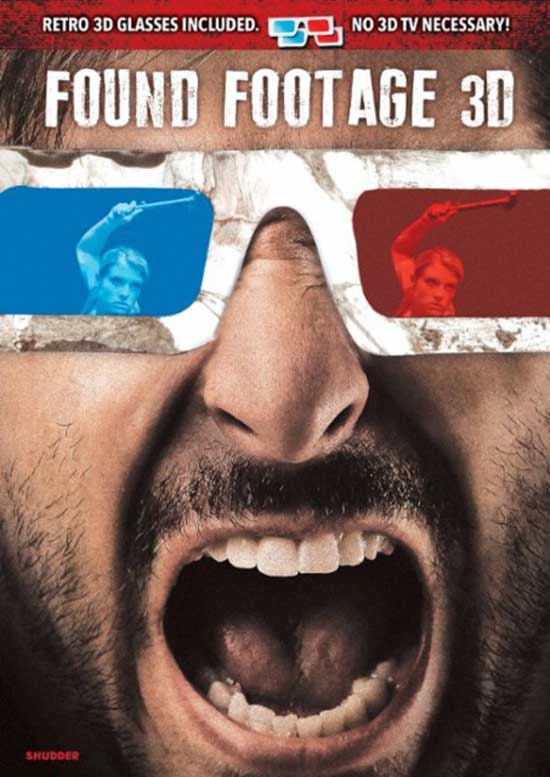 By title alone, most of us find our selves somewhere between the rolling of eyes and the anticipation of the next success story. Yes, these found footage movies are a dime a dozen, however many of us forget that with that said, they also have been some of the scariest films to enter the market in the last 2 decades.

“Found Footage 3D” is a suggested documentary of itself based on the idea of this same premise (huh??). The idea here is that found footage movies are tired and abundant while all the while attempting to film a decent horror movie that follows this exact same suite. At every corner the film wastes no time in making fun of itself by exactly stating what audiences expect from these films. 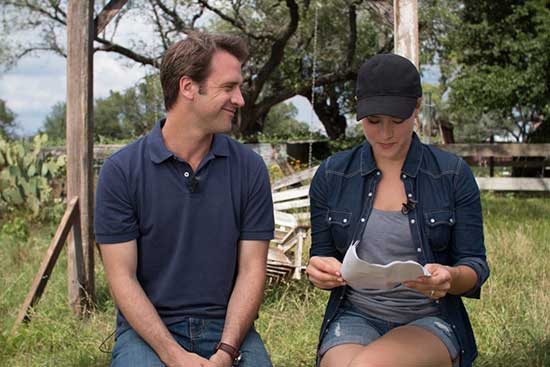 The rules, the situations, and the simple fact that a fond footage movie can’t work unless everyone dies (just the footage) sets some of the tone for things to come. “Found Footage 3D” is actually quite clever in that the film relies on the tensions of filmmaking to reinforce the reality that some thing have (actually) gone amiss despite the idea that they are also filming a movie trying to involve this same fear from it’s intended audience. Now while this very idea is not entirely new, I would have to say that many just don’t deliver don’t the misdirection in the end.

Led by the key writer actor of this group, Derek (Carter Roy) and a small bunch head out to a small old abandoned house in the pursuit of creating a horror film. The main characters beingL: Amy (Alena von Stroheim), Mark (Chris O’Brien),Andrew (Tom Saporito), Carl (Scott Allen Perry) and Lily (Jessica Perrin). The mockery here is that they actually stop at a rest stop to film the locals proclaiming the area to be bad news (prompted only for camera and their own movie project). 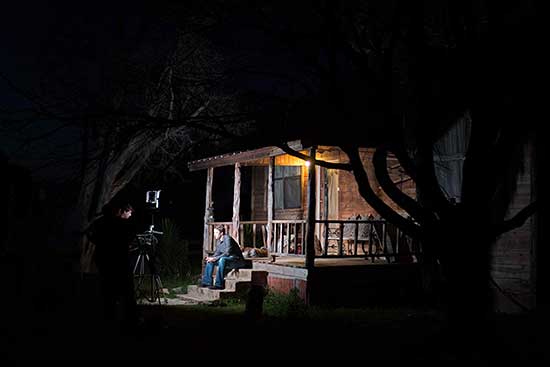 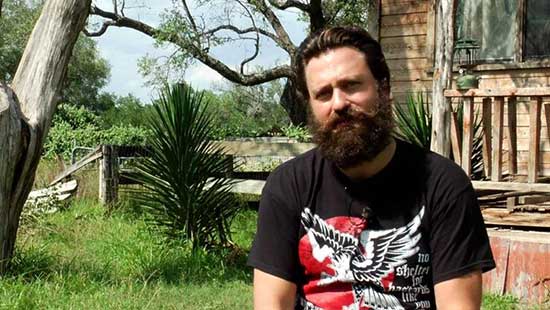 Everything here is shot per “found footage style”. This includes documenting the film, providing behind the scenes, interviews, and the general pieces needed to complete their intended film project. It all appears to be pretty in line with low budget film making (and thoughts of grandeur that they are creating the next masterpiece). The main gimmick here being that they are also filming the world’s first 3D found footage film (hence the movie title).

Derek believes that this extra added feature will catapult their piece into the public eye making it a break-thru success story. Actor Carter Roy also does a bang up job as the film’s resident ass hole in control who can’t seem to shake his an on and off again relationship to his ex-wife Amy.

The dialog, ideas and interactions presents some forms of dark comedy while also taking every opportunity to make fun of the genre and itself. It even goes as far to invite the (now defunct) horror site Fearnet to write about the shoot and interview its actors (which already makes this film a little dated….fearnet closed around 2014). This additive while also intended to add to the film’s mockery, ends up being a great setup.

As the film takes form per way of a live shoot and the tension building between cast, crew and others, an unseen force begins to take shape that does not welcome the outsiders making a mockery of its former living space. 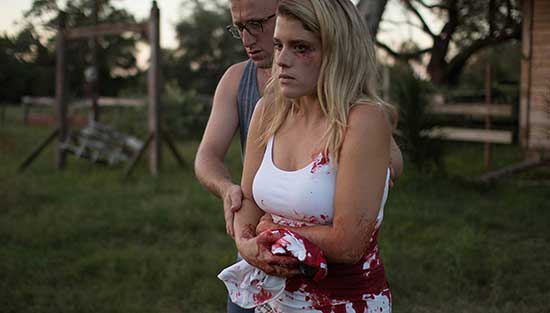 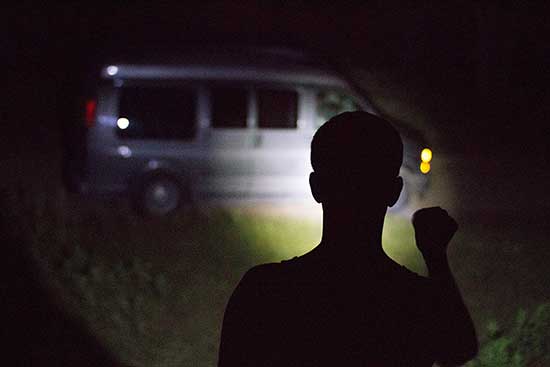 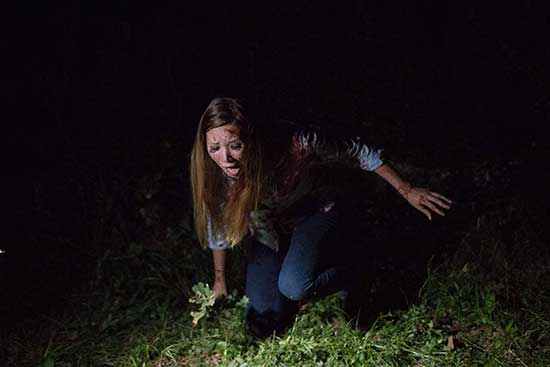 This element, the awakened dark force, is the real attraction piece to this whole project. All the while as a film is being made, a dark entity begins to make itself known thru accidents, phantom scratchings and freak accidents. This, much in the same sense as successful horror films that invoke dread and brooding, is the actual fear factor to the parody.

The script projects its outcome and foreshadows itself into a really effective horror film that is full of surprises, jump scares, and effectively edited moments of fright that bring things full circle.

I was pleasantly surprised and how this movie transformed itself and was able to pull off these shots and edited moments into a really compelling and tense horror film. The builds and deliveries here are solid without feeling forced, over planned, or overly predictable. I thought perhaps the less serious activity that is played out (on purpose) was also effective in setting us up to be caught off guard thru the whole ordeal. 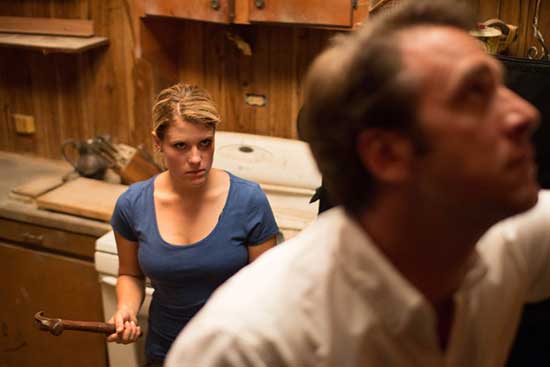 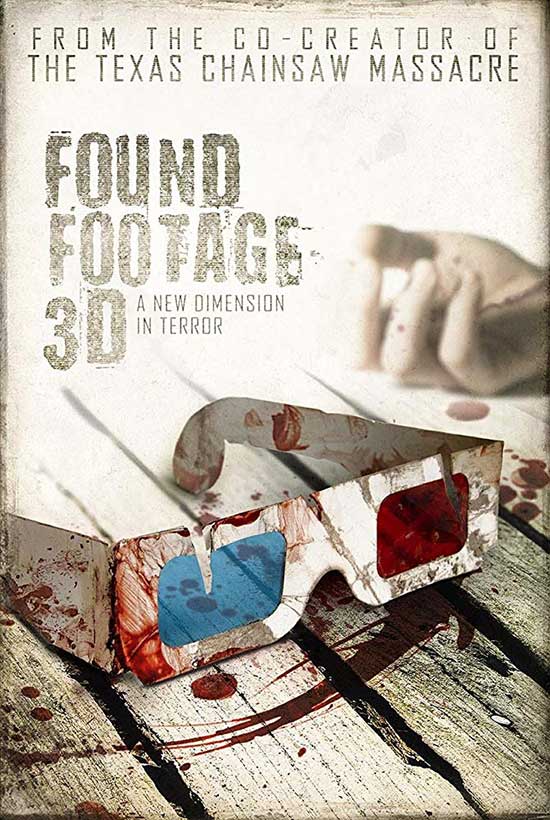 At the end of the day, this is a film I’d watch again and recommend to friends. It drives home its intention which is to scare its audience and does so elegantly under the guide of not being elegant. Quirky, scary and effectively jarring, Found Footage 3d is a surprise hit that you wont see coming. It also manages to be a solid addition to the found footage genre while making fun of it thru the whole film

I love the irony here….well played! It far exceeded my expectations!