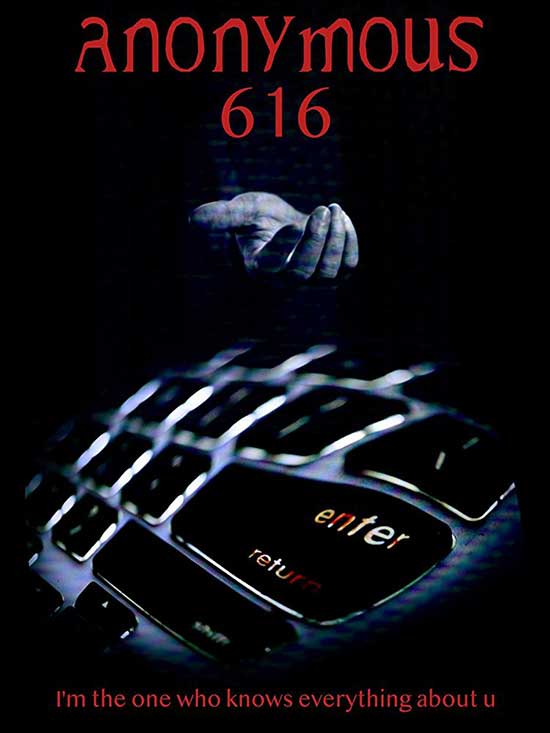 A reunion between two couples becomes a massacre when one of the guests meets an anonymous person online and willingly becomes a participant on a bloody path to becoming God-like.

What if you had the power to be God? To be unencumbered by the laws of morality as you define who should live or die based on your personal guidelines? A horrific nightmare that would be repellant to the 99.9 percent of us with a working moral compass. Yet, perhaps there is some appeal for the few in society whose compass is long overdue for maintenance. Notably those who are already mentally fractured. This exercise in manipulation with deification is explored in great detail in the low budget gem Anonymous 616 from director Mike Boss and the indie company Nail Driver Productions. Even from the deliberately ambiguous tagline: I’m the one who knows everything about U”, you get the feeling this is going to be something of an existential journey into darkness rather than a routine gorefest.

Two couples, old friends, reunite for a dinner after a two-year separation. The host couple suggests that the four try out a new version of the Happiness Pill for a few laughs, a drug called DMT. A mood and mind-altering paradise is promised. Yet, one of the quartet, Jason, is a post-9/11 war veteran who is concealing some damage to his own psyche. After consuming the chemical wonder, he comes across his friend’s computer in another room where an anonymous online entity begins bating him, with knowledge of the secrets Jason has, into taking a God-like approach and acting on his base true feelings about his friends as well as his fiancée Jenna. Jason, apparently, has buried resentments and anger about his friend Eric and Eric’s future wife Kelly and a belief that Eric and Jenna once slept together.

Acting on self-release of his rage, Jason kidnaps the others and subjects each to torture, mind games, and murder. But who is pulling the strings on Jason? Is it his own delusional state or a supernatural presence?

Boss deftly sneaks in a take on that age-old clichéd scenario of God and Satan warring over an individual. Remember the old cartoons which had a character having a choice to make that involved positive and negative connotations and images of a devil and an angel appearing on either side of them, offering their views? For my age group, it would be the scene from the classic 1978 frat comedy Animal House where Eric Stratton mulls what to do with an unconscious female student he’s carrying in a grocery cart.

Images of Eric as both angel and devil appear on each of his shoulders, warring over whether to use the opportunity to have sex. I like that kind of tug-of-war that opens the darkest points of the subconscious for the demons to come out for play. Boss, serving also as scriptwriter, purposely includes vagaries as to the catalyst for events, leaving the audience to make their own conclusions as to who and why. Is it a manifestation of the devil inhabiting the computer and communicating with Jason or is it self as the result of drug-infused hallucination? And I like the ambiguity of the finale where, while not spoiling it for the audience, the question of guilt and who is instigating it is raised.

I was quite shocked to find that this was the first feature to be directed by Boss, whose only previous effort behind the camera was the 2015 short Inimicus. Remarkably, he shows a deft skill for a first-timer in setting up shock pay-off scenes and editing the pace just right as to keep the viewer on the edge of their seat. Checking his resume, it seems Boss has somewhat of a keen interest in the study of moral code dilemmas. The Inimicus short, by description, deals with a woman presented with an opportunity to kill her rapist and her brother’s pleas to spare him. Once again, the back and forth between right and wrong. Which wins out in the battle for soul.

Have to give the special performance honors in the picture to Daniel Felix de Weldon as Jason. Konstantin Stanislavski promoted the idea of use of face and eyes to express emotion and thought. Don’t know if Weldon ever had the great acting coach on his reading list but he sure does exhibit the tiredness, turmoil and edge of collapse that only someone who has seen far too much can be at mentally in every eye stare. I’ve seen quite a few real war veterans myself who try for that same façade for show. Many don’t do it nearly as well. Daniel is the whole show here really in a central character tour-de-force. 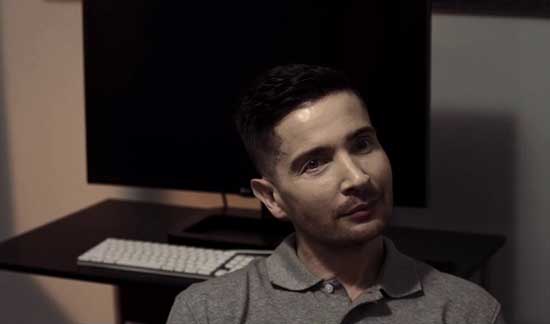 The other four characters (Kelly’s teenaged daughter Emily plays a role in Jason’s hidden lust for underage girls) are really merely collateral damage-headed players in the game for his soul. Bella Shepard channels a hint of Lolita with the sexually burgeoning daughter Emily. David Abramsky, Jessica Boss, and Emily Jordan manage to evoke sympathy for their roles as Eric, Jenna and Kelly, respectively. But the camera eye is on de Weldon and he does not disappoint with his riveting presence. 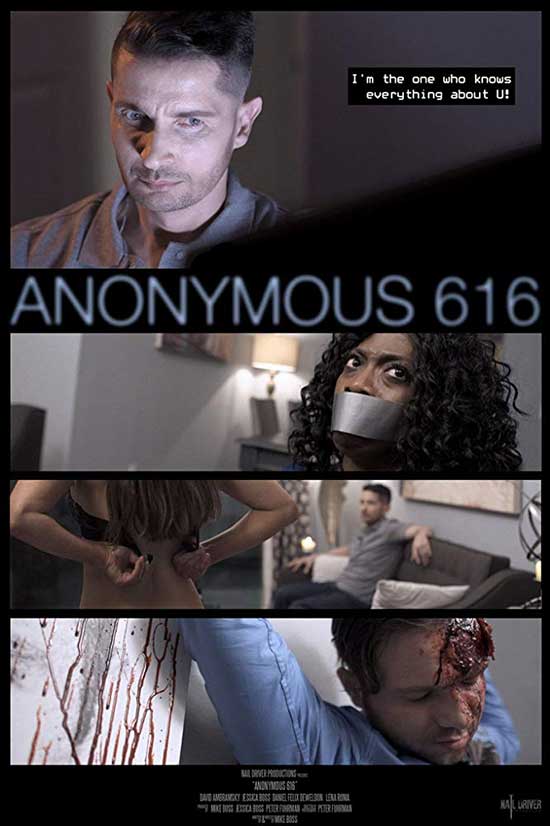 If you are seeking ordinary stalk-and-slash fare, look elsewhere. However, if you are wanting something with a twist of the ramifications of role-playing as the Almighty mixed in with the sanguinary goings-on, this is just the film for you. You might want to steer clear of computers that anonymously text you comments such as “I know everything about you” when you walk by them. Can’t be a good thing.