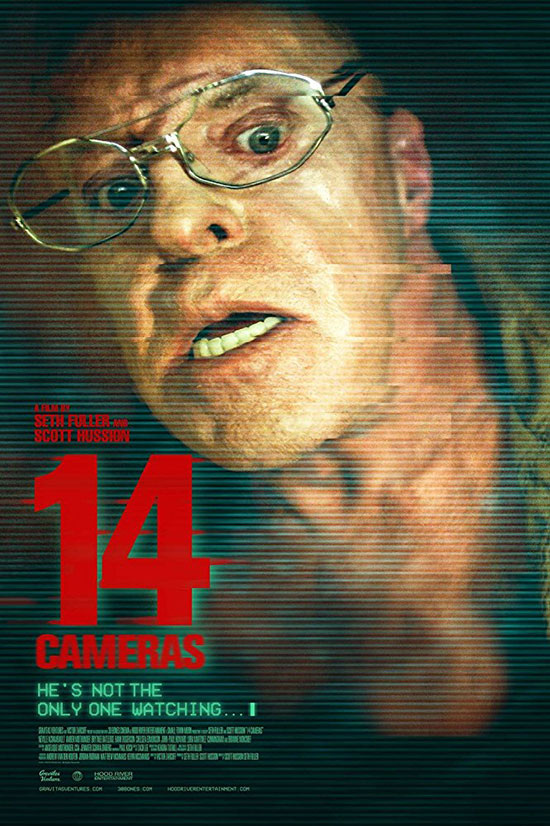 When a family of five rent a beautiful house for their summer vacation, the price seems too good to be true. Unbeknownst to them, the lascivious owner has set up a series of spy cams throughout the house, documenting their most intimate moments and live streaming them to the dark web.

As far as horror movie sequels go, 14 Cameras is by far one of the most surprising. Not for any reasons of quality, but simply because it’s predecessor, 13 Cameras AKA Slumlord, whilst enjoyable enough wasn’t screaming out for a second chapter. In that first film, written and directed by Victor Zarcoff, Neville Archambault played a sleazy landlord, Gerald, spying on his tenants before becoming horrifically involved in the lives of a couple renting from him. It didn’t cause many ripples in the horror community, but it was good enough if you felt the need to bathe in dirt for a bit. And let’s be honest, sometimes you just do.

In 14 Cameras, Zarcoff has written the script but handed directing duties over to Seth Fuller and Scott Hussion; both of whom making their feature length debuts. Gerald is back and, in many ways, has grown in character since we last saw him. Instead of renting little flats, he’s taking full advantage of the Airbnb market, renting out a palatial house in the middle of nowhere to unsuspecting tourists. Building upon his perversity for spying on his unwitting guests, Gerald sells a livestream on the dark web to a crowd of faceless deviants. He even has a son now, Junior. That’s… sweet?

For purposes of pretending to have a narrative, 14 Cameras throws a family of two parents and three nubile teenagers in the direction of Gerald and awaits the sexy results. And by sexy, I mean terrible. And by terrible, I mean boring. Whilst our family enjoy their time lounging by the pool, their holiday is broken up by CCTV footage of Gerald roaming around their holiday home whilst their out. Spurred on by his Dark Web audience, Gerald is happy to make a few extra coins stealing the used underwear of the girls to sell to his salacious viewers. And if that means he gets to use dad’s toothbrush at the same time, then so much the better.

All of which brings the main frustration of the film to the forefront. Buried in the tedious action, shiverless chills and lack of plot lies a gleaming nugget of an idea, a real humdinger that, if done properly, could have added some real traction to the film.

As Gerald’s relationship with his Dark Web fans grows, the third act sees them beginning to outstay their welcome. They start goading Gerald and asking for trophies he refuses to acquire, ones that go beyond some used undies. When a generous sum is offered to kidnap one of the teens, Gerald tries desperately to shut down his operation. For him, it seems the project has gone too far. We’ve seen in the film already – and its predecessor – that Gerald is not against dragging someone kicking and screaming to his abode, but that’s because they’re his items to do what he wishes. Gerald evidently doesn’t like to share. Like a well-timed meme, however, Gerald quickly learns you can’t stop the internet from spreading information and soon, he finds himself having to defend his tenants from the very horrors he’d happily commit himself.

It’s a great idea and adds a strange sense of humanity to the devious landlord. Well, in so much as it shows he has some kind of moral code. Making the antagonist the anti-hero is an intriguing narrative decision. This switch up of roles is one that was used to good effect in Ryûhei Kitamura’s No One Lives. Here, it quickly becomes an afterthought and what could have ended the film on a high just becomes a stepping stone towards more mediocrity.

Sure, Archambault is extremely good as the slack jawed Gerald, but that’s about the other thing you can say about this lackluster sequel. Here’s hoping we don’t see 15 Cameras anytime soon.