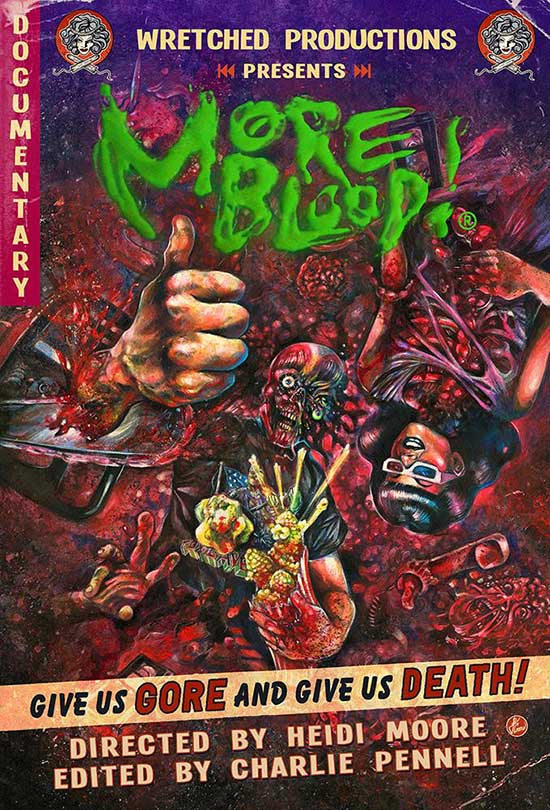 A documentary that explores why society loves to watch death and gore in movies.

The number one question a hardcore horror fan will be asked in their life (by non-horror fans) has got to be: Why do you watch that garbage? (Running a close second is probably “What is wrong with you?” but that’s a whole other documentary.) With More Blood! Wretched Productions’ Heidi Moore (Dolly Deadly and the upcoming Troma release, Kill Dolly Kill) looks to find answers to that undying question. And rather than putting a bunch of big-time stars and directors on camera and having them talk about their own movies, Moore taps the other side for answers, the people who watch and study the movies that those big-time filmmakers create. Thanks to this novel approach, More Blood! has a unique feel to it, with a fresh, exciting, and often overlooked segment of the horror population finally able to talk about what they love talking about the most: horror movies!

Directed by Heidi Moore and edited by Charlie Pennell, More Blood! is comprised of various “interview” segments, cut up and pieced together to group like topics. However, there isn’t a strict structure to the film, nor is there a narrative weaved throughout – no voiceover linking clips, no “host” or interviewer asking questions. Instead, this is around 85 minutes of bloody horror movie clips and people in the field of horror talking about their experiences and opinions. Very simple and very straightforward.

And who are these people that are talking about their love for horror films? The “big” name here is Lloyd Kaufman, reporting from Tromaville, but much like most of the films he makes a cameo in, he has a very minor role here. From H&M Films, there’s writer/directors Tom Komisar and Daniel Murphy (House of Whores, Blood Moon River); from Femme Creatif Productions, writer/director Kim Culpepper (Behind Closed Doors); and from Dreams for Dead Cats Productions, writer/director Cassandra Sechler (Wireboy, Smiley, and co-writer of Dolly Deadly). Then there’s horror writer Preston Fassel (Fangoria), artist Robert Soffian, and special effects artist Jason Thompson (Bad Seed FX). And we’ve even got an appearance by Chainsaw Sally herself, actress April Burril. Last but so very far from least, there are the folks who dedicate their lives to talking about other peoples’ films, the writers and podcasters: Chelsea Opperman (Don’t Tell Mom the Babysitter’s Undead podcast), Jasmine Martinez (one half of the Bitches of Horror podcast), Jeremiah Rosario and David Wronski (co-founders of Thirteenth Floor website), and one of the hardest working people in the world of horror, host of the Horror Happens radio show, Jay Kay. These are people who know their stuff, who spend a good part of their day consuming genre work in all its forms. They’re not random actors from some teen drama show on WB, or stand-up comedians who have more jokes than knowledge of the material – this is the frontline, and these are the experts. 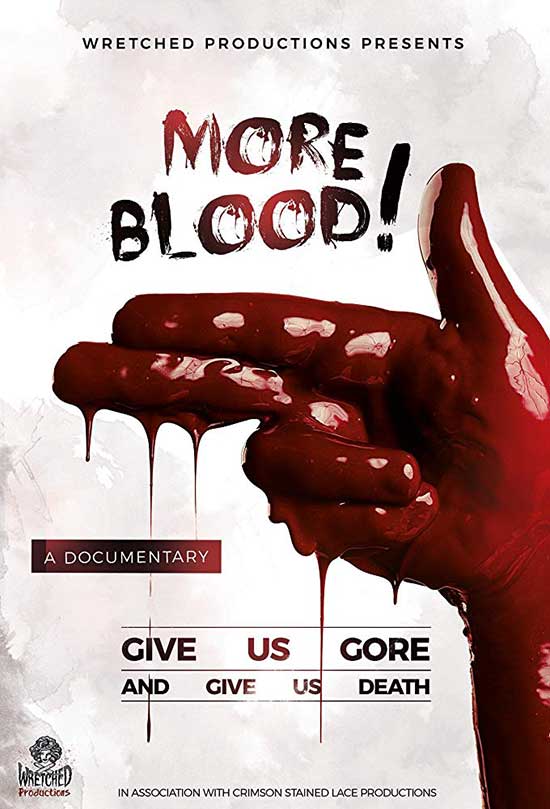 The main topic of More Blood! is, of course, answering the question posed above, why do horror fans love this stuff so much. From there, the discussion goes in a variety of directions. Some of the topics include the question of desensitization, the important difference between reality and fantasy, and the notion that in horror films, not only are the killers and the violence considered “sexy,” but quite often the on-screen villain ends up the audience’s hero. A lot of varying opinions come out of the range of speakers, but a few universal truths seem to be established. The only way to take it “too far” is to force the cast or crew to do something against their will; the extras in horror movies are literally only there to die for the fans’ enjoyment; and the horror audience loves the spectacle, the extreme, and wants more of it.

It’s interesting to note that in discussing the blood and gore and extreme horror we watch, a handful of non-horror examples are brought up. Of course movies like Texas Chainsaw Massacre and Evil Dead and Saw are discussed, as are the less mainstream but equally (or more) disturbing August Underground films, A Serbian Film, and Lucifer Valentine’s VomitGore Trilogy. Gaspar Noe’s Irreversible, not technically a horror movie, is mentioned for its upsetting content, as is John Waters’ Pink Flamingos. But when talking about violence and the disturbing media we consume, we have to admit, it’s not all in horror movies. Old time freakshows get a mention, as does Shakespeare, and true crime reenactment shows on channels like ID, and even such polar opposites as British theatre and Nascar. Because horror films didn’t invent murder and violence; those have always been around.

More Blood! is a horror movie documentary made for horror movie people. This may not win over the more mainstream audiences, the people who only watch scary movies around Halloween, but it’s sure to put a smile on the faces of the people within “the circle.” The sad thing is, if those mainstream folks, the ones at our jobs who ask us why we like this garbage, did take the time to watch this, most of their questions would be answered. While there’s not a solid structure to the film, and it covers a whole lot of territory in a fairly short amount of time, Moore and company at Wretched Productions have put together a nice addition to the horror reference library.