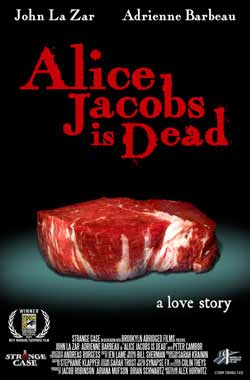 Dr. Ben Jacobs saved the world. The drug he created allowed mankind to fight back against the Z-virus, which nearly destroyed civilization entirely. Now, in the aftermath of the crisis, he’s trying to cure the last victims of the virus. But what will happen when he brings his mysterious work home?

In this tasty short by filmmaker Alex Horwitz, we are given yet another aspect in the end of world zombie phase. It echoes traits of Resident Evil and 28 days later but only in concept. As we are shown by footage, Ben Jacobs is a noted scientist who has curbed the dreaded Z-virus. Not cured so much as prevented the spread of it thru a special serum. The last victims of the virus still infected can be treated but as a complete cure……it is yet undetermined

Though with his victory we also find that his wife Alice is in fact one of these last few suffering from this disease. She has been kept stable thru injections but the virus is gaining on her, weakening and eventually will transform completely. Ben knows that his time and her time is limited. Though his feelings are getting in the way of his responsibility. Alice is played by the familiar face of actress Adrienne Barbeau. With John La Zar playing her husband Dr. Ben Jacobs.

The film is indeed a short but is a heartwarming and scary little piece of horror. Alice upon complete turnover becomes one of these zombie like creatures who in like company attack, are violent and kill. Can Ben save her “before” she turns? A smart thriller that almost sets a prologue to a longer feature not yet created. Horwitz has his finger on the pulse of zombie horror that would segue perfectly into a feature that delivers. It’s “Lifetime” meets “Masters of Horror”