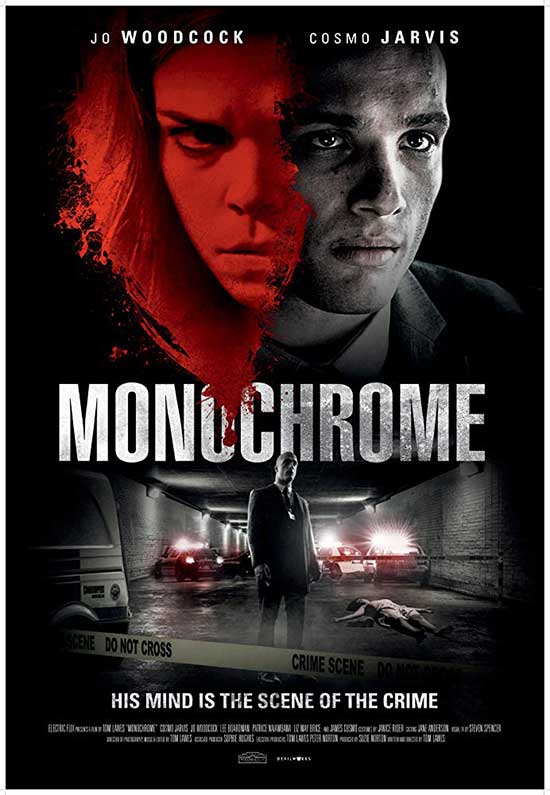 A disillusioned young woman becomes a serial killer who targets wealthy land-owners, and a brilliant detective must use his unusual neurological condition to track her down.

I would like to take a moment to explain something about “Monochrome”, the film up for review here.

“Monochrome” is not a horror movie. It seems like it is being marketed and aimed towards that demographic. Sure, it has a “serial” killer, but it doesn’t dwell on the violent acts or drag you into the killer’s insanity the same way “Henry: Portrait of a Serial Killer” does. It handles the killer in much the same way “CSI” or other such cop shows would.

If you came here expecting a horror romp brimming over with blood, guts, and whatever, best move along. If you are interested in something a bit different, then definitely hang around.

Okay. If “Monochrome” is NOT a horror movie, what is it?

You ever watch “Monk” and wish it wasn’t basically a comedy? Ever watch “Sherlock” and wish the main character wasn’t a superior-acting snot of a person? Then you might like “Monochrome”.

Emma Rose is in a bit of a pickle. Her boyfriend is being loaded into a police car as she returns to their posh digs with some groceries. Seems he decided to move over 700 million pounds (as in currency) out of government retirement funds and dumped them into an off-shore account. Now Emma is wanted as an accomplice and to provide information to convict her boyfriend.

Emma goes off the grid to hide and takes a job doing housework in exchange for a place to sleep and food to eat. When the rather well-to-do “employer”, an aging artist with a following, learns of Emma’s true identity, he turns cruel and demanding as he knows she will submit to avoid the authorities. When he puts a dog’s tracking collar on her, Emma hits her limits. She turns the table on her captor and ultimately uses the man’s diabetes as a way to kill him. She hits the road again.

Meanwhile, a young man afflicted with synesthesia, Gabriel Lenard, is being brought into a newly-formed law enforcement team that uses both technology and people with unusual talents to discover and solve crimes that are becoming increasing nonconventional and resistant to the textbook investigative styles currently in use. Due to his ability to sense the world in different ways due to his neurological issues, Gabriel is thought to be a likely asset.

Emma’s and Gabriel’s worlds start colliding when Gabriel attends an art show held by the previously-mentioned artist mere days before his lifeless body is found. He detects something unusual about the death of the artist and proceeds to follow up on his suspicions.

Meanwhile, Emma has taken up with a rich older couple, working only for room and food again. Like last time, she is threatened and verbally abused which makes it easier for her to give into her rage. Two more dead and their bodies are left with evidence of their failing business that they were using to continue leveraging money from others.

Gabriel begins to suspect there is a connection between the deaths of the artist and the older couple. In fact, he believes the likely killer is Emma, but attempting to present his information to the officer in charge of the retirement fund theft investigation results in bad blood between the two men, even though Gabriel is at a loss as to the hostility.

To avoid spoilers, let’s just say that the viewer is taken on trips inside the heads of both Emma and Gabriel as the two move closer each other and the resolution to the murders as well as the missing money.

First, I want to say that the entire film is solid as far as performances go. Even the low-key characters are handled well, but the real breakthrough actor here is Jo Woodcock as Emma Rose. She keeps her character as neutral as possible until other characters push her too far. First it is subtle facial expressions, then her whole face changes from a person at odds with her life into a person who takes a certain delight in paying back all the pain, abuse, and hatred her “employers” unloaded on her. Even though some of her actions are gruesome, you find yourself liking her far more than perhaps you should, and you want to see good things happen for her. Without her performance grounding the film, I don’t think the rest of the characters could have held the rudder of the movie steady.

That having been said, Cosmo Jarvis plays a character type that is quickly becoming an abrasive cliché in modern film and television, yet he manages to play him with enough confusion and hesitation that you get a sense of how overwhelming his new job is in light of his synesthesia, yet he doesn’t become an object of pity or comedy. He does his best to accept his issues and pushes past them in an effort to find the truth and solve the case before more people get hurt. 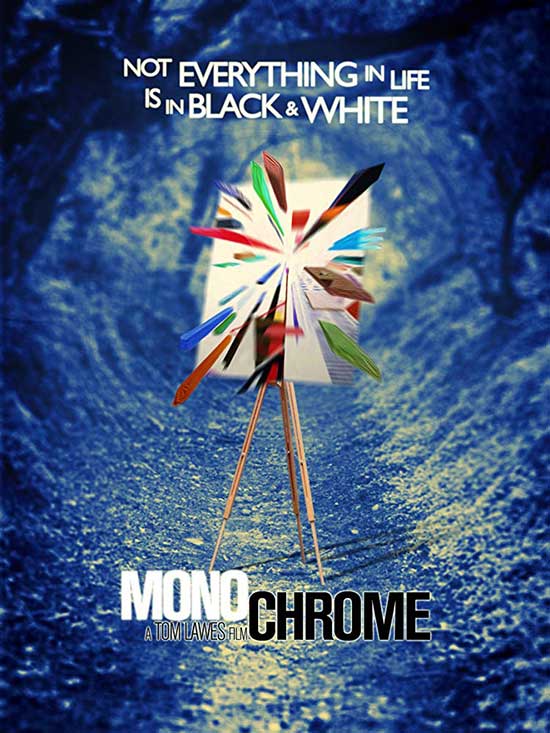 Now we get down to the iffy parts of the film.

Up front is the trend I referenced earlier concerning crime fighters with odd mental or neurological disorders that basically turn them into superheroes. While this idea still has some life left in it, “Monochrome” does little to add to the genre other than attempting to be more realistic in its depiction of the afflicted individual. Let me be clear when I say that, in this film, the idea is good, but the script kind of drops the hot potato.

The script, while serving the two major characters well, attempts to cram far too much into its nearly two-hour running time. Things seem to hold together well until the film hits the one-hour mark. At that point, it almost seems that the editor was scrambling to get as many scenes wedged into the film before reaching 120 minutes as possible. Many revelations seem rushed, and the conclusion lacks the proper emotional impact as a result. Honestly, I felt like I was watching a six-hour series carved down to 2 hours, and that is a shame as a deeper story built around this case and these characters would have me, and fans of British police procedurals, pretty much binge-watching all the episodes.

Is “Monochrome” worth watching? Yes, as long as you realize it is not horror, and you like well-written, solidly-acted crime shows. Even with the downsides to this film, you can see that Thomas Lawes (director/writer/producer/most everything else) has the skills to make great films, if only he could narrow his focus just a bit in the future.