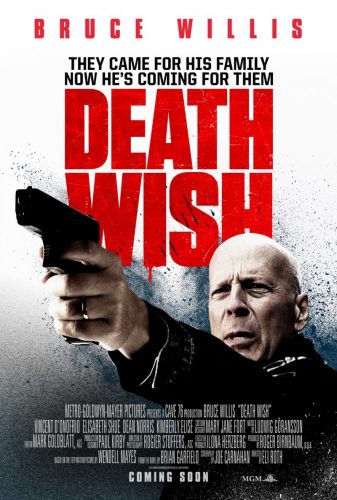 Dr. Paul Kersey is an experienced trauma surgeon, a man who has spent his life saving lives. After an attack on his family, Paul embarks on his own mission for justice.

I will start this review off by saying I’ve always been a fan of Eli Roth. Since I first saw Cabin Fever in 2003 I’ve been obsessed with his films. So when I heard he was directing a remake of the Charles Bronson flick Death Wish I got pretty excited. Eli has been one of those directors that doesn’t just do the same film over and over. He explores different themes and sometimes even different genres. You can’t compare a film like Hostel with a film like The Green Inferno. But you can tell they were both directed by Roth. And Death Wish is no exception. 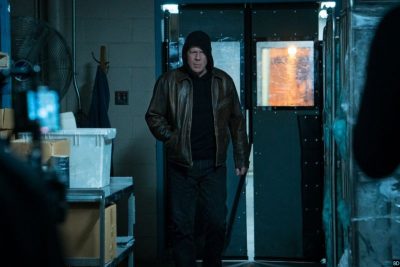 The story as you may all know is a revenge story. Paul Kersey (Bruce Willis) is a mild mannered doctor who likes to obey the laws. He’s not a fighting man which they even show a man at his daughter’s soccer game being obnoxious and wanting to fight Paul, and Paul doesn’t do anything. We find out in the next scene that apparently Paul use to get in to fights but changed. He has a loving wife Lucy (Elizabeth Shue) and daughter, Jordan (Camila Morrone) who are basically his world. His brother Frank (Vincent D’Onofrio) is not the honest hard working man his brother is and always asks for money. 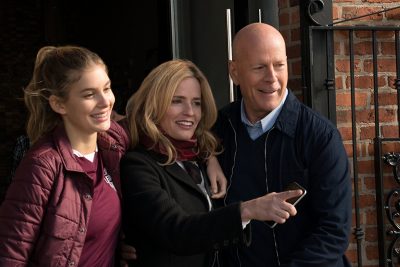 Their world is turned upside down when a group of robbers break in to their house and end up killing the wife and putting the daughter in a coma. First Paul turns to two police detectives (Dean Norris and Kimberly Elise) to find the people who did it and arrest them. Problem is the police have too much to handle. And Paul decides to take matters in to his own hands.

My favorite scenes in the film are in the beginning when you learn he hasn’t even fired a gun before. The way he gets the gun is very unbelievable. Yet I went with it. He goes to get a gun at a gun shop run by a kick ass chick named Bethany (Kirby Bliss Blanton) who tells him about what they have and tells him how long it will be before he can get one. But then one drops out of a patients pocket during surgery and he takes it without anyone noticing. That is probably my least favorite part and stopped this from being another 5 star review. Just did not believe that would happen. I mean there’s a million other ways he could have found a gun. 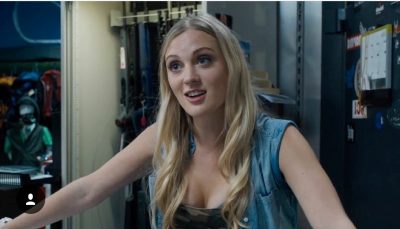 But my other favorite scene is his real attempt at being a vigilante. When he puts his hood on and saves a woman from a couple of thugs things don’t go exactly as intended. He ends up killing both of the guys and saving the girl but almost dies in the process. In another scene much later in the story someone gets shot and killed trying to do what Paul is doing. Showing a bit of, “hey kids don’t try this at home cause it probably won’t go exactly as planned.” Paul is caught on video and the video goes online and goes viral. He is known as the Grim Reaper. Some had named him the Guardian Angel which I find is a better name. I mean hey he is saving people from bad guys.

All along the way Paul is taking out the bad guys one by one. Tracking down each guy that was there the day his wife was killed. I’m not going to go in to too much more cause I don’t really want to spoil it. Everything I’ve said you can see in trailers or read in the synopsis. What I will say is that Eli Roth knows how to entertain. It kept me intrigued. The characters were 3 dimensional. And that might have had to do with Joe Carnahan’s very well thought out script. Eli probably put some touches on it but Joe is a damn good writer as well. The only character I wish had gotten more time was Bethany. I understand why they brought that character in but I was hoping she’d help him out some more than just introduce him to the gun shop. 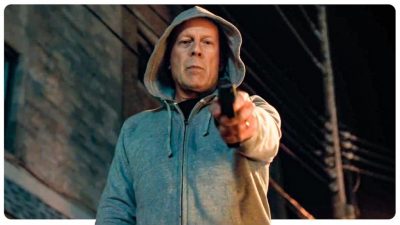 All in all I found Death Wish to be pure fun. It’s got some gore and even a torture scene using medical equipment. So if you are into gore well of course Eli Roth would do a great job with that. All the cast and crew deliver on this one. And the Blu Ray is packed with awesome extras like a commentary track, deleted scenes with commentary, featurettes, making of docs, trailers, and more. If you are on the fence of whether not to check out this movie I would say go for it. If you want to watch a movie with an entertaining story, interesting fleshed out characters, that is action packed this is the flick for you! 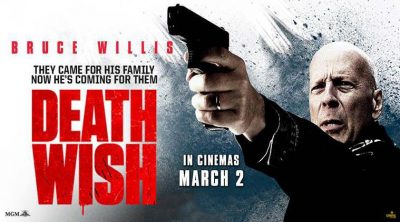