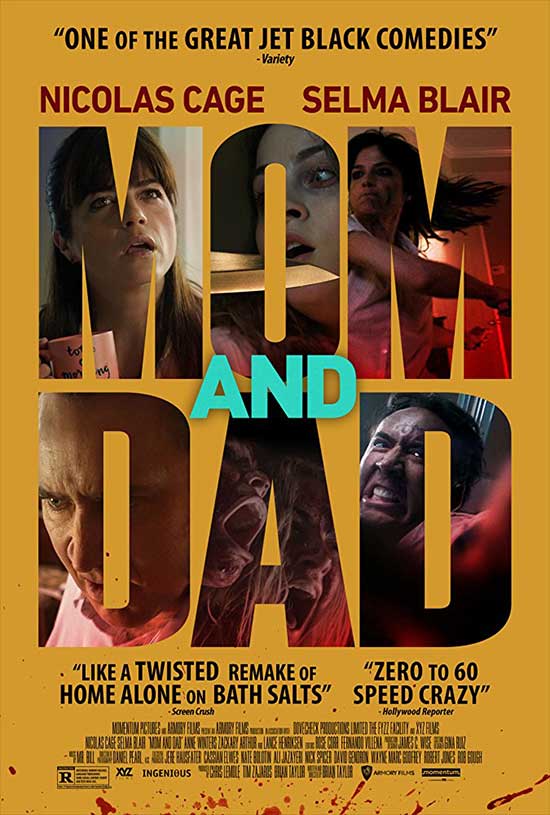 A teenage girl and her little brother must survive a wild 24 hours during which a mass hysteria of unknown origins causes parents to turn violently on their own kids.

Mom and Dad is a satirical horror flick from writer/director Brian Taylor (Crank 2006, Ghost Rider: Spirit of Vengeance) that shows events ensuing after a neurological terrorist attack causes parents to want to brutally slay their children. While it sounds gruesome, the film is fairly low-violence for horror fare, and most murders happen off screen. Still, high production values on the cinematography side and a high-end cast lends a nice sheen to this fun romp through insanity.

Nicolas Cage (Bringing Out the Dead, Raising Arizona) and Selma Blair (Hellboy I/II, Cruel Intentions 1999) play the titular parents, with Cage reminiscing about his youthful debauchery to the detriment of his marriage, and Blair losing the focus of her life when her daughter starts acting like an angsty teen. The teenage daughter Carly, played by Anne Winters (13 Reasons Why series season 2), along with her boyfriend Damon (Robert T. Cunningham in his feature debut) and younger brother Josh (Zachary Arthur, The 5th Wave), must stay alive throughout the parents’ onslaught, which leads to mass property damage and blood-letting.

On the acting front, both Cage and Blair are in top form, and Blair’s smoky-eyed tears and Cage’s pitiless gazes feel real enough to generate discomfort amidst the less-than-serious tone of the film. Parental anguish at their lost freedom and children’s bratty behaviors are both exaggerated in the film to up the satire and embolden the underlying message that everyone sacrifices themselves for loved ones. This plays better in the parents than it does in Winter’s character, which is unrelatable. Carly, who steals money and verbally cuts her mother to shreds, does so without showing any cause besides hormones, which makes it feel like the cause of bad parental behavior than the result of it. Cunningham’s character gets the most bodily harm, to the point where it’s uncomfortably unclear whether Taylor was trying to make a dig at racial inequality, or just didn’t realize he was battering the only black lead character disproportionally. Regardless, Cunningham acts fine in his debut role, as does Arthur, though his part is fairly small.

One of the best features of Mom and Dad is the nice play between Blair and Cage’s relationship, which improves as their plans to off their kids deepen. They garner a scary charm in their harmonious attacks and play well off one another. Taylor’s directing is technically solid, but there are some editing choices that confuse time and seem excessive, throwing off the otherwise brisk pace of the film on several occasions. The ending, too, is problematic, because it’s not the conclusion to the story. Cage reportedly wants to do a sequel, which could be a lot of fun, and it’s painful that Mom and Dad didn’t get the theatrical release it deserves. The editing missteps and skimpy ending are minor gripes, however, and hardly hamper the film’s engaging presentation. This might also be your only opportunity to see Nicolas Cage wearing a Misfits t-shirt, so there you go. 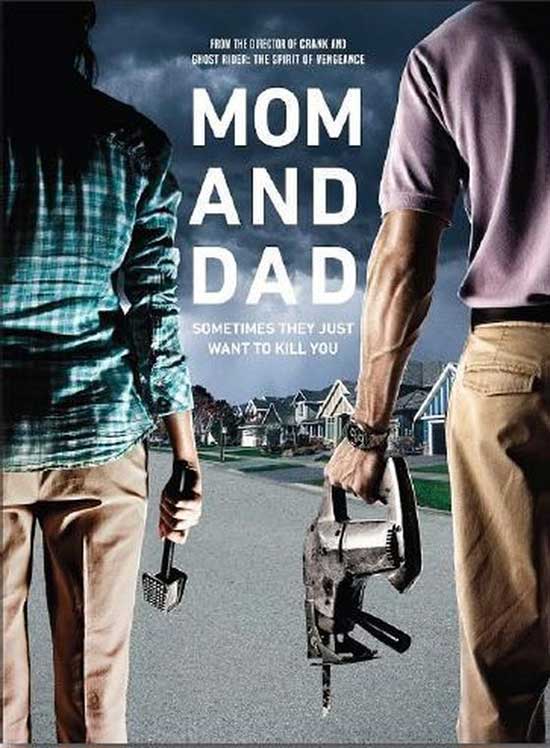 Ultimately, Taylor has put together a fun, not-too-shallow to be dull but not-too-deep to be depressing, look at child-parent relations that’s as fun as a zombie flick. Blair, Cage, and the rest of the cast present well, and Taylor’s directorial chops haven’t diminished from his lack of a theater-run release in a few years. If the idea of parents systematically offing their children sounds at all fascinating to you, do yourself a favor and support Mom and Dad. You won’t be disappointed, and the more of us that show our love for the film might increase our chances of one day getting the sequel we deserve.