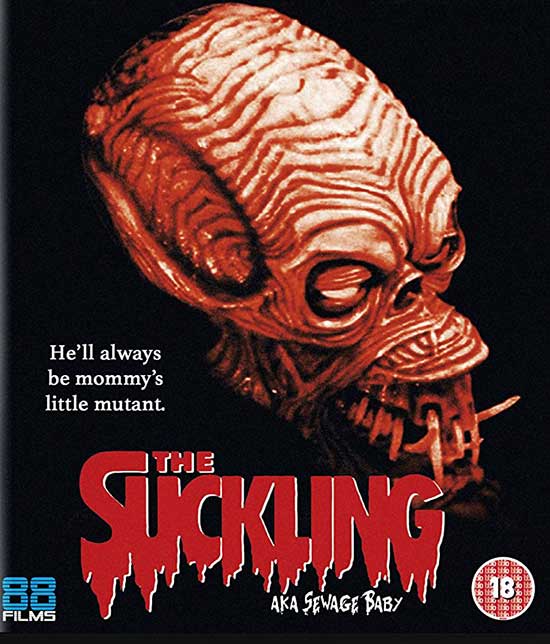 A woman goes to a back alley abortion clinic, only to have her aborted fetus attack her, her boyfriend, and everyone else at the clinic.

Trust me when I tell you that “The Suckling” is not a movie that I ever planned on watching. Between the cover art and the title, I just couldn’t see watching something that reeked of Troma- wannabe train wreck. Troma is fine, in small doses, but people who try to emulate that style usually miss the fun factor.

Well, I’m glad I watched it. It had more going on than I thought. Or maybe I just thought it did. 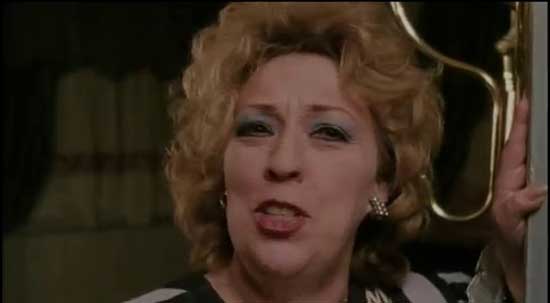 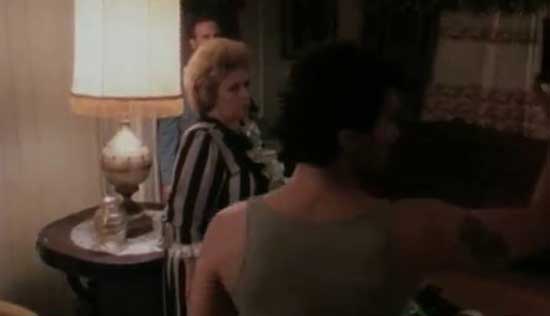 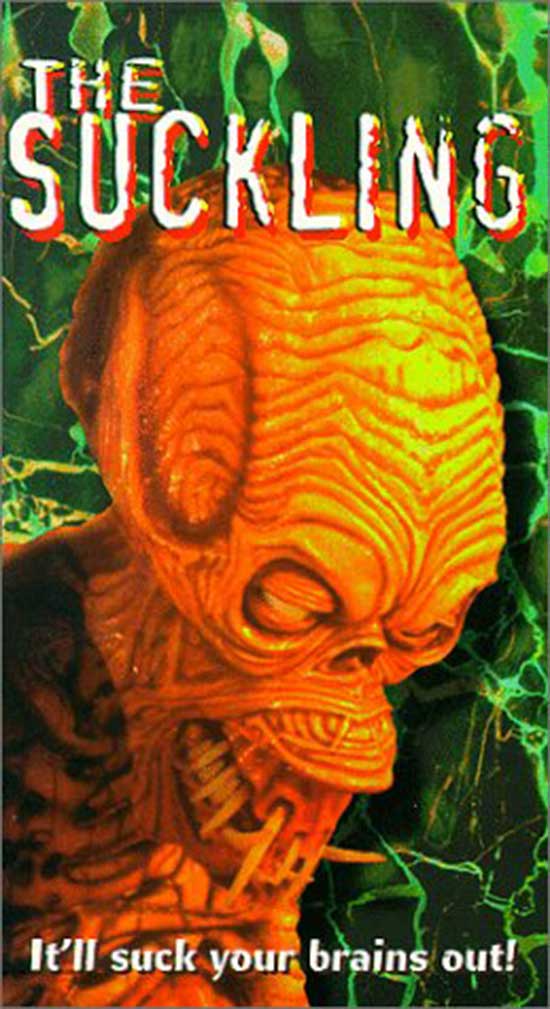 The film starts with a preface telling you that the events you are about to see took place in a house in 1973 where all the inhabitants of the house were killed except one young girl. Of course, her version of events was deemed impossible, and she was committed to an insane asylum.

We meet a young couple looking for the location of a backstreet abortionist. Turns out the house also has a number of prostitutes upstairs. Big Mama runs the place with her macho son Alex and a general fixer named Sherman. Mama drugs the girl and performs the procedure. The fetus is flushed down the toilet. Once in the sewers, the unwanted flesh puppet is coated in toxic waste, which causes fangs, claws, and a wicked retractable umbilical cord to sprout. Our little monster sets out to right a few wrongs. 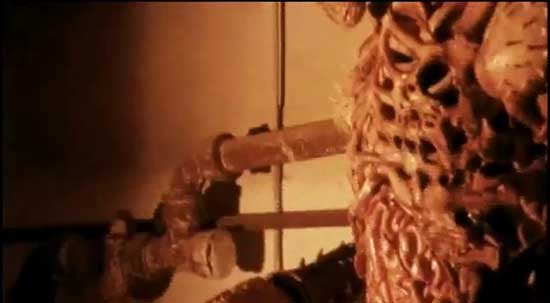 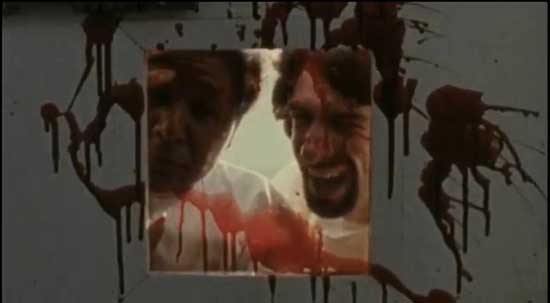 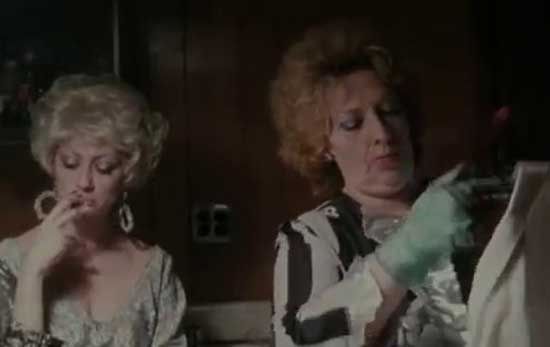 The middle part of the film deals with the people who find themselves trapped in the house which has become surrounded by what seems to be a massive placenta. Admittedly, this part does drag with lots of talking and exposition for characters who are basically monster chow. As the monster pares down the numbers, the film gets a well-needed boost from the sudden and sometimes brutal attacks from both the creature and the inhabitants who attack each other as tensions rise.

The last part is pretty much a fully expected resolution of the main story since the preface told you how things ended. You do get a rather wild morphing scene that is almost a reverse of that freak-out scene with the kid in the hallway from Mario Bava’s “Shock”. If you don’t know the scene, look it up.

So far, I’ve pretty much outlined a movie that probably doesn’t sound all that great, and that’s what kept me away from it. It has its moments, and it definitely tosses a curve in a time or two. Overall, the painfully low budget (most of which had to go to the creature effects) along with so-so acting and a script that needed some serious tightening leaves you with a film that seems to reek of squandered potential. 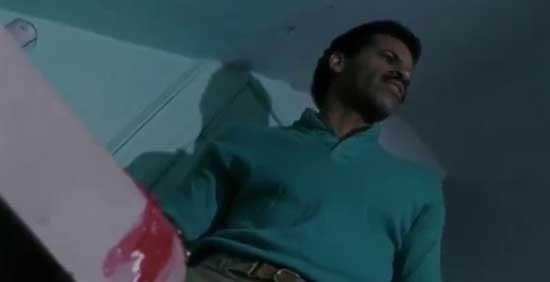 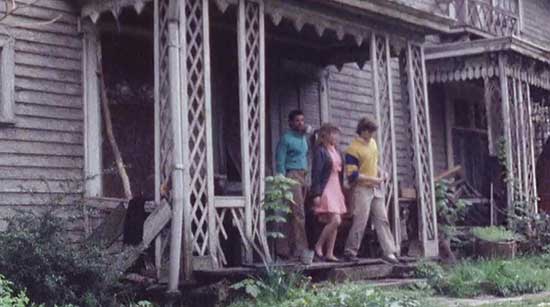 Still, there seems to be something going on under the surface of this film. Maybe I’m just wanting to see more than is really there. Possibly I am giving this movie a bit more credit than it might deserve. Just hear me out and try looking at the movie in a slightly different light.

I don’t know that the director/writer of “The Suckling” intended for the film to work as a mash-up of different sub-genres and eras from cinema’s past, but the influences are there.

The young couple head to a backstreet abortion clinic at the beginning. Going back to the days of classic exploitation (we’re talking the 30s and 40s, folks), there were a few of those old flicks that had the young unwed mother visiting some house where they had their bun removed from the oven. Usually, the older films ended with the girl bleeding out from a botched abortion, all to teach the lesson that pre-marital sex is very, very bad and nothing good can come from it. Heck, even the boyfriend’s letterman’s cardigan reeks of the old films.

Next, we jump to the fully-formed creature that attacks the trapped victims. After the initial creation scenes, the monster is the old and reliable man in a rubber suit. This was a staple in a ton of the 1950’s era science fiction and horror films. Here, the monster morphs to human size to better slaughter its victims. The suit is actually fairly impressive, and Francis Teri, the director, keeps the monster in the shadows or limits the screen time to hide imperfections, just like the better rubber-suit sci-fi movies from back in the day.

Now, let’s talk about the prostitute Candy. She is an older, kinda burned out whore who just can’t keep from falling back on her tired routine of come-ons. Everything about her, from her hair to her clothes and even the heavy makeup, is right out of the mid-60s. Maybe not so unusual in 1973, but it seems to refer back to the sexploitation flicks of the 60s. You know the type: the films that promised you naked bodies and sex, but often only gave you topless women (if that much) and sex with underwear on. Oddly enough, most of those films borrowed the bleak point of view of the classic-era exploitation while incorporating the cynicism of the socially and politically unstable 60s, which leads to our next reference point. 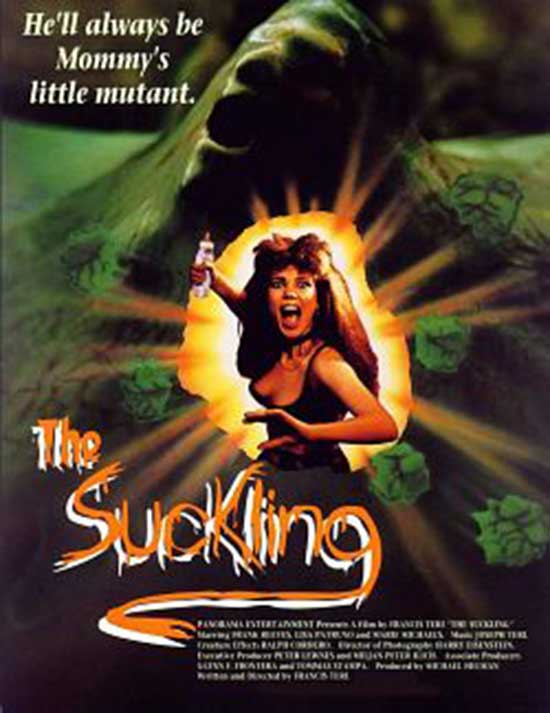 Alex, Big Mama’s kid, comes across as a reference to Krug from “The Last House on the Left”. Actually, he brings in the element of sudden violence amongst the victims by one of the victims themselves. “Last House”, along with other pitch-black films like “The Last House on Dead End Street”, presented a society horrified at its own taste for violence and torture. Alex fills that role in the film, rather neatly giving a nod to those dark 70’s bits of gruesomeness.

The practical effects used to show the creation of the creature seem like an ode to the whole 80s era of practical effect wizards who attempted to top each other with each new film. “Day of the Dead”, “The Howling”, and even “An American Werewolf in London” brought advanced practical effects to the mainstream and became the “star” of many such film. “The Suckling” spends ample time letting you see all the work and money the filmmakers put into creating “Mommy’s little mutant”. 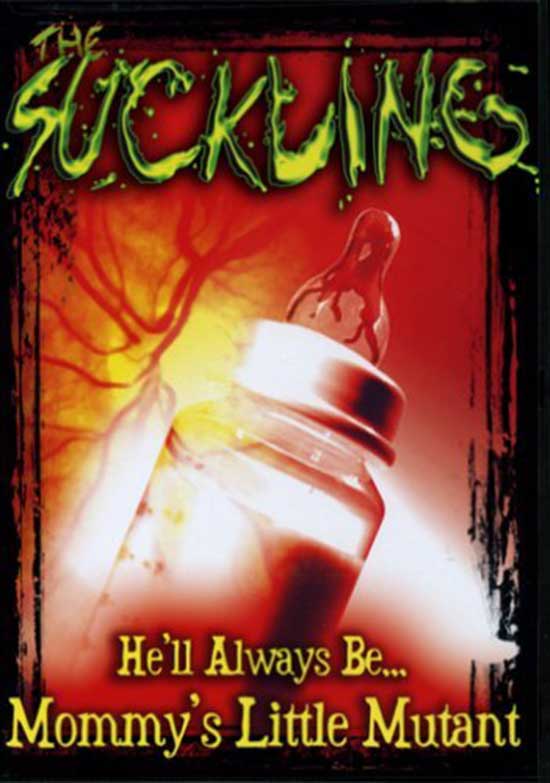 Finally, as previously mentioned, the film gives more than a nod to the Troma films that this film somewhat resembles. The humor is crude, the tone of the film often becomes tongue-in-cheek, and it takes you into areas that the average viewer would most likely find offensive.

Were all the references intended? I’m not sure. Francis Teri, the director and writer, pretty much vanished after this, and I didn’t notice any interviews with him in my rather brief search for information. If you know the director or you ARE Francis Teri, get in touch with me through this site. I’d love to pick your brain about this entertaining but very uneven one-shot.

Give “The Suckling” a try if you just want something different. Tough it through the slow bits, and you may find you like the odd little tale of the unwanted fetus who just wanted to be loved.