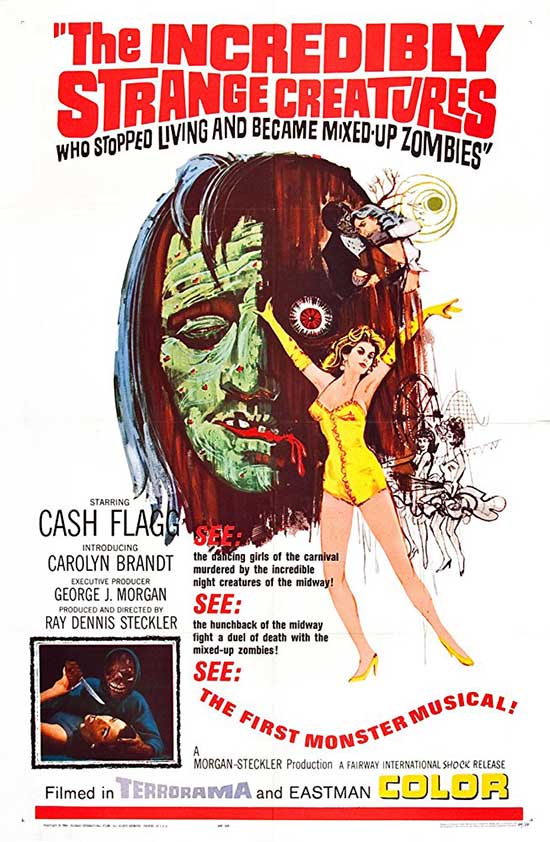 Jerry falls in love with a stripper he meets at a carnival. Little does he know that she is the sister of a gypsy fortune teller whose predictions he had scoffed at earlier. The gypsy turns him into a zombie and he goes on a killing spree.

Well folks, here we got a movie that is completely bonkers, in case the title didn’t make that abundantly clear. It’s a story of some seedy fortune teller who hypnotizes a young man into being some kind of murder zombie so she can use him to slaughter the people she views as rivals. She also keeps actual zombies around that actually don’t do anything until the end of the film. The trip to the film’s climax is definitely a bizarre one, filled with bizarre dream sequences, a couple of murders, bad accents, and strange musical dance numbers. 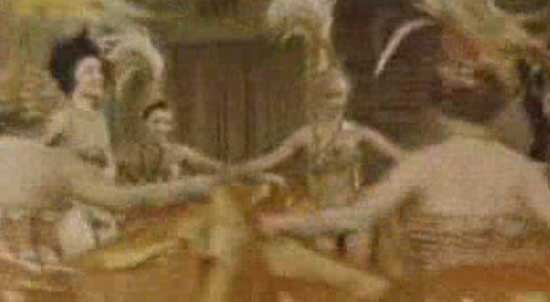 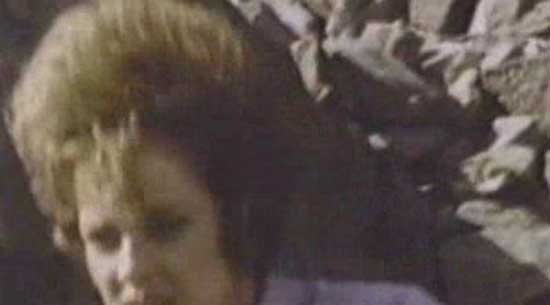 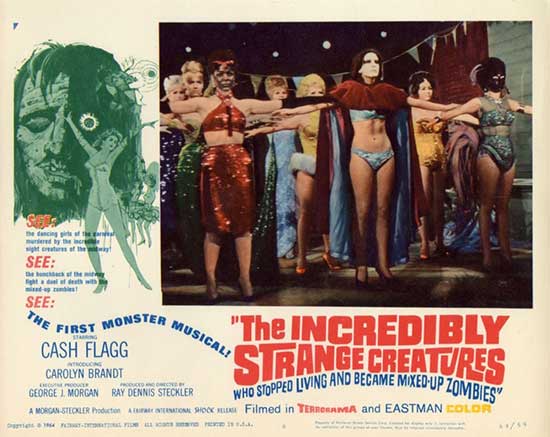 The Incredibly Strange Creatures that Stopped Living and Became Mixed-up Zombies (let’s short that to Incredibly Strange Creatures from here on out) is one of those films that was featured on an episode of the original Mystery Science Theater 3000, and for good reason. There’s a lot of material ripe for mockery starting with the fact that the plot, what there is of it, has so many holes that the movie is barely coherent. And these aren’t small plot holes, either. We’re talking you can drive a mack truck through them. This leads to a film that feels like a series of barely connected events slapped together in the hopes that a story happens.

To give the movie credit, it does try to distract you from thinking too hard about it by having a lot of dance numbers. I don’t know if they were there to just pad the movies time out or if the director was hoping to make the first monster movie musical, but whatever the reasons these sequences seem out of place and screws with the pacing. Even worse, the dancers move with the grace of reanimated corpses, and they show about as much energy as well. The only time we get one that’s kind of effective is when our main character, Jerry, has a nightmare sequence. While the performers were still terrible, there was something about their outfits and the masks they wore actually made the dance number kind of creepy. Considering the levels of ineptitude you encounter when watching this turker, this one scene felt like the director did something competent by accident. Regardless, the dancing does succeed in being distracting mainly because you’ll end up asking “What the hell is going on?” 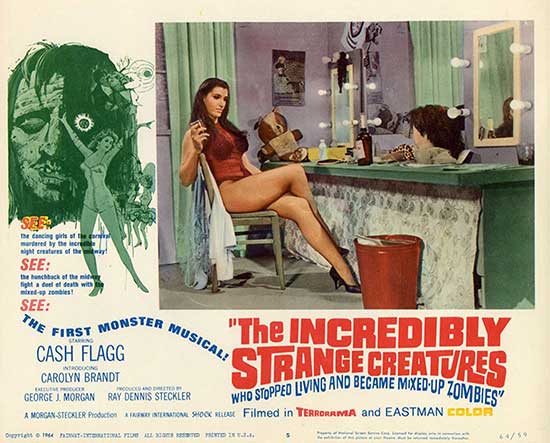 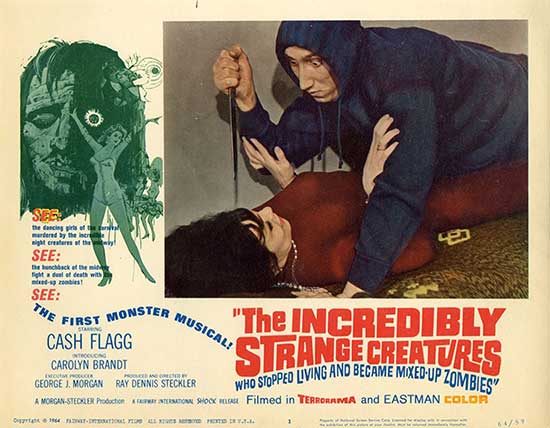 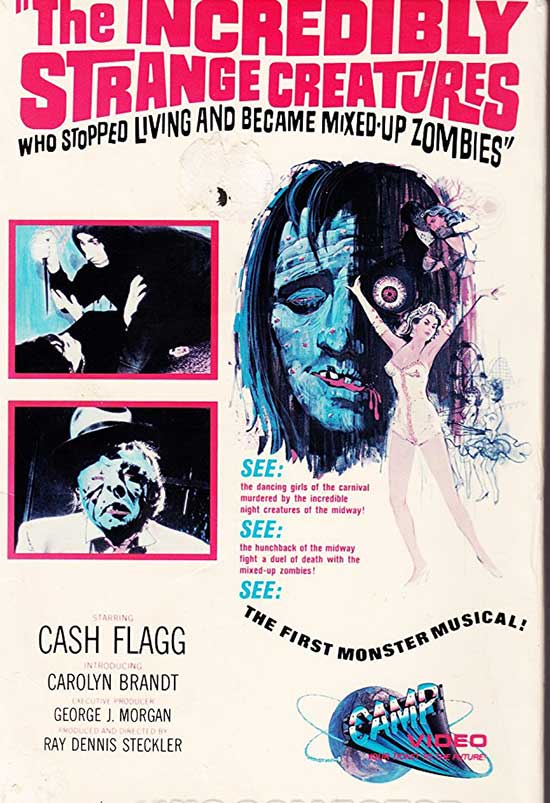 Incredibly Strange Creatures had a small budget, so all the sets, costumes, makeup, and special effects were bottom of the barrel. Or, in the case, bottom of the dumpster. Considering that the carnival that is the main setting for the majority of the film is supposed to be rundown and grungy looking, the cheapness at least helps achieve that appearance. From what I understand, director Ray Dennis Steckler, only had $38,000 to work with, and even by 1964 standards that’s pretty much the same as having no budget at all. I’ll give Steckler credit for being able to get anything made with such a low amount, but I’m not sure that the end result would have been better if he had $38,000,000 at his disposal. (Let’s just say, he’s not really good at directing.)

The actors don’t do the flick any favors. Absolutely no one gives a performance that doesn’t make you cringe. For instance, any member of the cast who has to give an accent usually gives one that so thick you have to use a chainsaw to cut it, or they give one so terrible you want to stick cotton in your ears to stop yourself from having to hear it. If overacting is your bag of tea, however, then this might be the movie for you. If you also happen to like horribly written then you’re in for a treat, because it sounds like the scriptwriters apparently never listened to how normal people speak. The script made me wonder if English was not their first language. 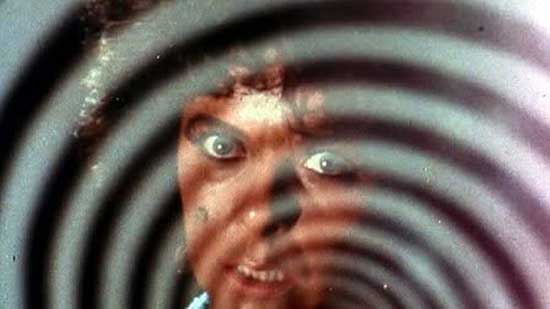 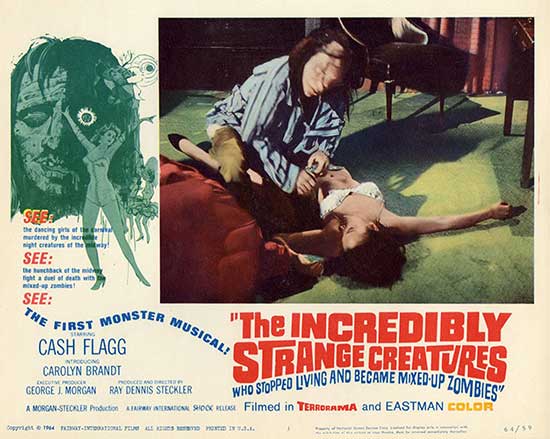 You also got to love how our main characters are “juvenile delinquents” that are played by people well into their late twenties. Steckler cast himself as the lead, and his receding hairline sadly made him look even older than his years. He also had the charisma of a lump of coal, so he made for one of the least compelling leading men you’ll run across. Not to be mean, but he kind of looked like a rodent who was given human form.

There’s so much bad that you’d expect watching this flick to be a dreadful slog. However, it manages to have enough of a hallucinatory feel, and be insane enough, to be oddly compelling. If you’re thinking of checking it out, you may want to watch the Mystery Science Theater 3000 episode that covered it. It’s much better that way. Alternatively, you can just invite some friends over and have fun mocking it yourselves. It’s that kind of film.