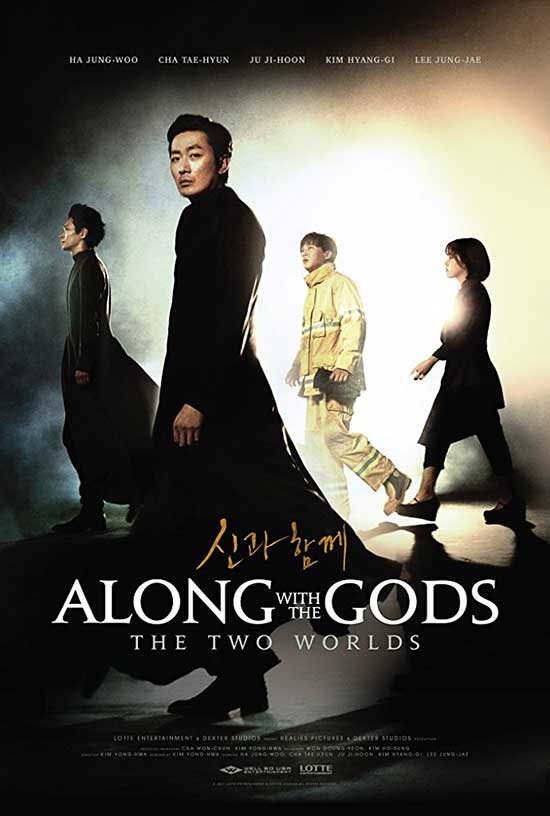 After a heroic death, a firefighter navigates the afterlife with the help of three guides.

There are certain subjects in film that I am always interested in seeing: horror musicals, sea monster expeditions, robots that want to be human, and hunting men for sport. But my favorite by far are stories dealing with the afterlife—angels, demons, gods, higher realms, heavenly trials. Whether they’re cheeky comedies like Dogma, sleek thrillers like Constantine, or whimsical tear-jerkers like City of Angels, the glimpse behind the curtain at the angels among us is always inspiring whether you’re religious or not. It’s kinda like The Matrix but for theology nerds.

All cultures have their own versions of what waits on the other side and despite their differences in the details, the basic ideas remain the same. Those of us who believe in an afterlife agree that the conditions to getting in relate to being a good person, but what does that really mean? We all make mistakes, lose our way, feel guilt and act selfishly. How can you judge a human life as simply good or bad when there are so many roles played within one lifetime?

Along with the Gods begins with firefighter Kim Ja-hong falling to his death, his body breaking the impact and saving the life of the little girl in his arms. As he reels in confusion watching his friends gather around his body, he is greeted by a man and woman in black, who introduce themselves as Hewonmak and Deok-choon. They are later joined by their boss, Gang-lim, and they inform Ja-hong that they are guardians, charged with being his escorts through the afterlife.

The stairway to heaven, as it were, is no walk in the park. Ja-hong must face seven trials over 49 days through the various Hells: deceit, indolence (laziness), injustice, betrayal, violence, murder, and filial impiety (sins against family). Only after passing all of these trials will he be reincarnated and more importantly, have one last chance to see his mother again. He has the advantage of being deemed a “paragon” upon entry into the afterlife, having given his life to save another, and therefore is a very valuable soul who is set to breeze through his trials for being such a good guy. But every life has its missteps, and Ja-hong will have to answer for them all before the seven gods of Hell.

There are many more twists in this Gordian knot of a film, yet despite the two hour runtime, Along with the Gods never loses speed on its intricate story. It somehow takes the many loose ends between the afterlife and the happenings on earth and ties it all together into a solid ball of spectacular action and piercing emotion. Every level of Hell is a dazzling set piece with its own unique method of damnation—whether drowning in the River of Indolence or crushed by rocks in the Pit of Violence—and each of these gods are unique and vibrantly realized. Ja-hong’s guardians are themselves distinct from one another, each carrying their own frustrations and vulnerabilities despite dying a long time ago. Ja-hong’s success in these trials is especially important to them, because his reincarnation brings them ever closer to their own.

The drama on earth is no less stormy. Ja-hong’s brother and ailing mother’s struggles in the wake of his death echo loudly in the trials in Hell and make his chances for redemption even rockier. But that is precisely where the heart of this story lies: in the love of a family, even an imperfect one. For every sin in Ja-hong’s life comes the question of the reason behind the act, and each reveals a level of love and sacrifice that brought tears to my eyes more than once.

The story may be moving on its own, but it would be a bit of a slog without the talents of our rather large cast. It’s hard to choose a favorite among our charming trio of heavenly guides–cheerful apple-polisher Deok-choon, cynical smartass Hewonmak, or Gang-lim the stoic boss with a soft heart. The gods are each uniquely memorable, but an instant favorite is the Goddess of Deceit—a 10-year-old girl sitting on an oversized throne, sucking a lollipop and rolling her eyes at the petty follies of human beings. But our mortal characters are where our hearts and souls lie, their own trials on earth as painful and familiar to us as our own families, and through it all remains the love they share, no matter how broken. The cast is brilliant all around and really brings life into what could easily be a melodramatic slog.

I really can’t recommend this film enough, not just to niche genre lovers like myself, but anyone who has wondered about their own “purpose” and impact on others’ lives. Along with the Gods poses the idea that even the smallest gesture can have a ripple effect that goes beyond imagination, and questions the idea if we are ever truly living for ourselves. Every life has value, every action has impact, and every human soul is capable of redemption.