10.) Grace (2009)
directed by Paul Solet (Bullet Head, 2017); starring Jordan Ladd, Samantha Ferris, Gabrielle Rose and Stephen Park. A pregnant woman named Madeline (Jordan Ladd, Robot Chicken series) loses her husband and near-term baby in a car accident in this bizarre indie flick from the late 2000’s. She decides to wait for natural labor to deliver the dead baby and yet, somehow, a little girl is born alive, whom she names Grace. Unfortunately, Grace has some odd characteristics—she attracts mountains of  flies, smells putrid, and drinks human blood instead of milk. This puts her vegan mother in a bind, as she looks for sources of blood to keep Grace happy. Not for the squeamish, but if you have a high tolerance for “icky”, this one’s for you. 0n disc and streaming. 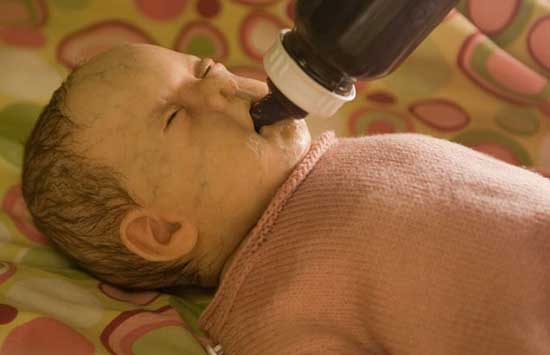 9.) The Seventh Sign (1988)
directed by Carl Schultz (The Young Indian Jones Chronicles series); starring Demi Moore, Michael Biehn, Jurgen Prochnow, and Manny Jacobs. This apocalyptic thriller stars Moore and Biehn (Tombstone, 1993) as Abby and Russell Quinn, expectant parents whose coming baby’s birth is the last of the Seven Signs of the Apocalypse. As the plot unfolds, Abby discovers that her baby will be the first child born without a soul, as prophesied in apocalyptic scripture, and after its birth, the end of the world will begin. A shady priest (Peter Friedman) and a mysterious drifter named David (Prochnow, Das Boot, 1975) keep tabs on Abby to make sure everything goes off as planned by the Big Guy Upstairs. It’s a race against time as she fights for both her baby and the fate of the human race, with only the help of a nerdy yeshiva student (Jacobs), while her skeptical lawyer husband is distracted by an important murder case. The plot builds up nicely in the way a good murder mystery should, although some of the ending revelations are a bit cringe-y. On disc and streaming. 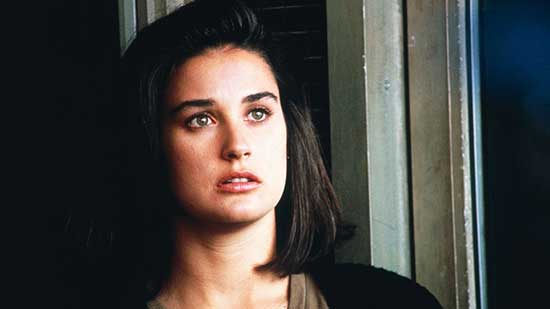 8.) The Stranger Within (1974)
a made-for-TV movie, directed by Lee Phillips, a prolific TV director; starring Barbara Eden, George Grizzard, David Doyle, and Joyce Van Patten. This sci-fi/thriller is from the golden age of beloved “movies of the week” that still have a following decades after they were aired. Written by horrormeister Richard Matheson (The Legend  of Hell House, 1973) from one of his own short stories, this eerie, suspenseful tale concerns an artist named Ann Collins (Eden), who unaccountably finds herself pregnant, even though her husband (Grizzard) had a vasectomy three years before. Of course, Ann’s husband believes she’s been cheating, but eventually they decide to keep the baby. Ann starts to behave very oddly as her pregnancy progresses: eating a strange diet, rambling in an unknown language, and painting pictures of an alien landscape. A family friend (Doyle) who knows hypnosis puts her under and finds out that she’s carrying a child from another world. Forget that the leading actress is best known for one of the cheesiest sitcoms ever; this film and the ending are quite memorable. On disc from the Warner Archive, which means that, unfortunately, it’s from a print transfer, not from the remastered original. 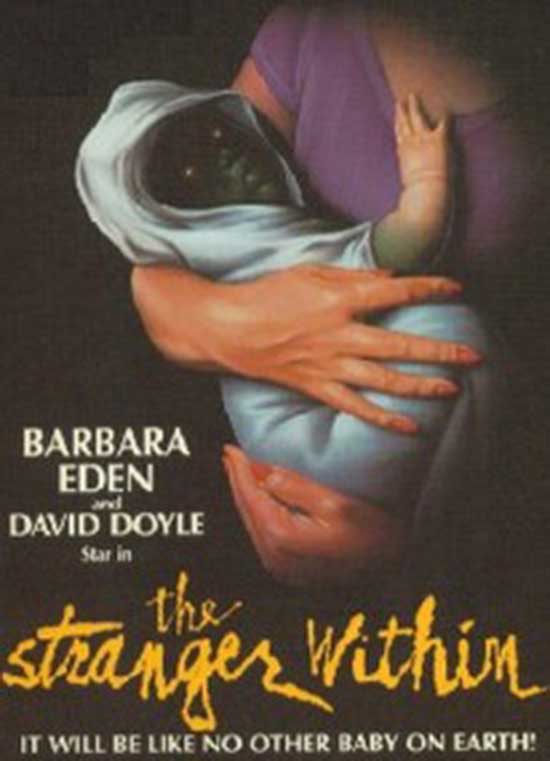 7.) The Other (1972)
directed by Robert Mulligan; starring Diana Muldaur, Uta Hagen, John Ritter, and Chris and Martin Udvarnocky, based on the best-selling classic novel by Tom Tryon. This atmospheric creepfest, directed by the man who helmed the iconic To Kill a Mockingbird (1962), is actually an evil twin movie (one of the best ever made, IMHO). However, the single most horrific scene involves a newborn baby—and it was this scene that was used to market the film, under the tagline, “Holland, where’s the baby?” A recently widowed mother (Muldaur) lives on her husband’s family farm in rural New England with her twin sons, Niles and Holland (the Udvarnocky twins, who are excellent in their only screen appearance). Also living on the farm are her pregnant grown daughter and son-in-law (Ritter), and the children’s superstitious Russian grandmother, Ada (played by Broadway legend Uta Hagen, in one of her few onscreen performances.) Strange, unexplained deaths keep happening in and around the farm, while the twin boys spend most of their time playing what may be an astral projection game taught to them by their psychic grandma. On disc; a decent copy can usually be found on YouTube if you look hard enough. 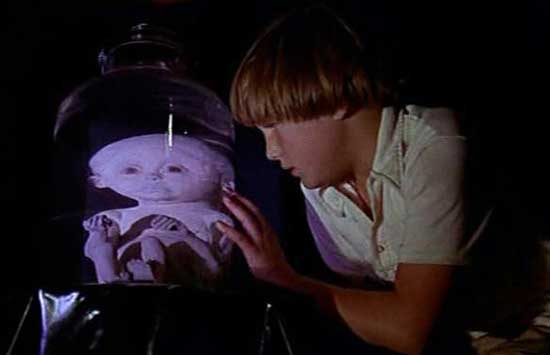 6.) The Hand That Rocks The Cradle (1992)
directed by Curtis Hanson (L.A. Confidential, 1997); starring Rebecca De Mornay, Annabella Sciorra, Julianne Moore, Matt McCoy, and Ernie Hudson. In this hit thriller about a psychotic Nanny From Hell, a pregnant woman named Claire Bartel (Sciorra, The Sopranos series) exposes to the world that her pervy doctor molested her during an examination, which causes him to commit suicide. The doctor’s own pregnant wife (De Mornay, Risky Business, 1983) has a bloody premature labor from the shock and loses her child. A few months later, she shows up at the unsuspecting Claire’s house as Peyton Flanders, the perfect nanny for Claire’s newborn baby boy. In reality, Peyton is intent on getting revenge against Claire by murdering her and stealing her baby. De Mornay is deliciously evil in what is likely the best role of her career, as the beautiful, unhinged Peyton who will do anything to destroy Claire. On disc and streaming. 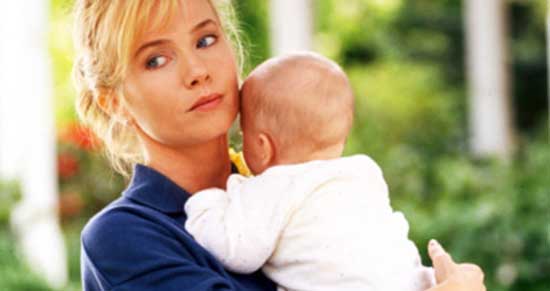 5) Eraserhead (1977)
directed by David Lynch (Inland Empire, 2006); starring Jack Nance, Charlotte Stewart, Allen Joseph, and Jeanne Bates. One of the most celebrated midnightmovies ever, this surreal, b&w cult classic grew out of one of Lynch’s film school projects. The plot concerns a working-class couple, Henry and Mary X (Nance and Stewart), who have a deformed baby. The baby cries constantly and looks like a cross between a dinosaur embryo, a pile of Silly String, and “Piglet” from Winnie-the-Pooh. Henry and Mary try to stop the crying, but nothing works, and Mary leaves in anger. Henry tries to take care of the baby alone, but eventually stabs the child in frustration. The stabbing of the baby is deeply disturbing, but he seems to morph into a giant  monster and then a planet, so perhaps he’s still alive, somewhere. Afterward, Henry  pursues a relationship with his fantasy love, The Lady in The Radiator (Laurel Near). What can I say—it’s Lynch. On disc and streaming. 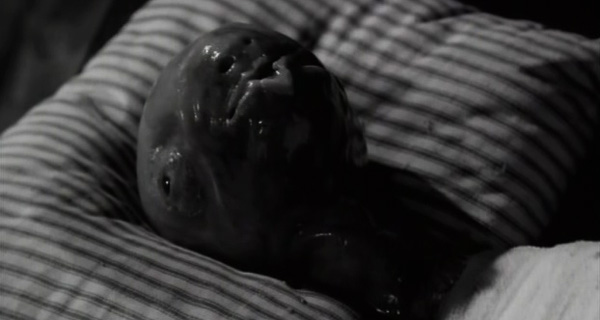 4) It’s Alive (1974)
written and directed by cult film legend Larry Cohen (Hell Up in Harlem, 1973); starring John P. Ryan, Andrew Duggan, and Sharon Farrell. The grand master of all mutant baby films, It’s Alive belongs on this list because of the film’s cultural impact alone, even though it’s an uneven effort with terrible pacing, zero character development, a ridiculous script, and cheap production values. The best features are the score composed by Bernard Hermann (one of the greatest screen composers of all time) and the mutant baby itself, which, even though we only see it in frustratingly short glimpses, is pretty convincing for a mid-70s monster filmed without benefit of CGI. Actors Sharon Farrell and John P. Ryan—both familiar TV faces in the 70s—aren’t able to make much headway with the leaden scrip, as the parents of a killer mutant baby who slashes and bites its way across suburban Los Angeles in search of its family. Tapping into early 70s fears about environmental pollution and toxic pharmaceuticals, It’s Alive was popular enough to spawn several sequels and a 2008 remake, which was written by Cohen. On disc and streaming. 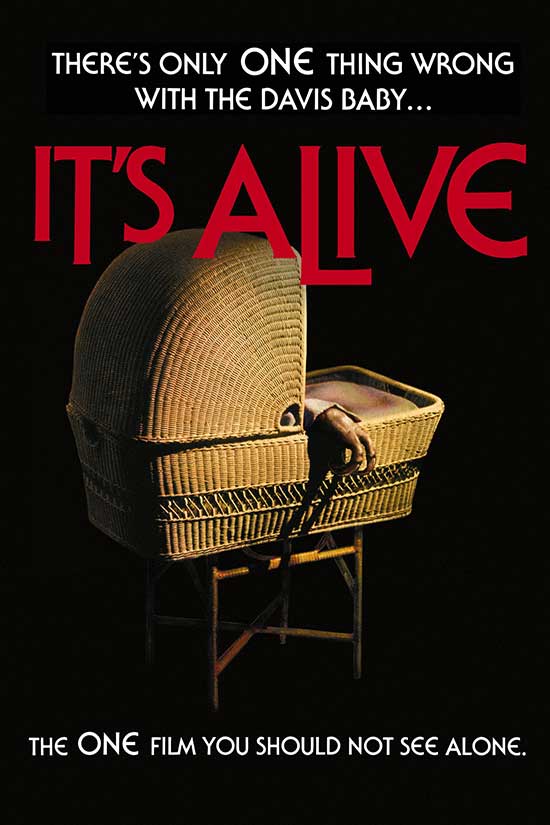 3.) Demon Seed (1977)
directed by Donald Cammell (Wild Side, 1995); starring Fritz Weaver, Julie Christie, Gerrit Graham, and Robert Vaughn; based on the novel by Dean Koontz. Fritz Weaver plays an obsessed scientist who creates a home supercomputer that can perform amazing feats, such as finding a cure for leukemia. The computer, called Proteus (voiced by Robert Vaughn from The Man From Uncle series), tires of the limitations of its electronic form and also develops an obsession with the scientist’s wife Susan, played by Julie Christie (Finding Neverland, 2004). Proteus longs to have a human form, and eventually creates a way to synthesize human semen and forcibly impregnate Susan with it; he then traps her in the house until she delivers a human/cyborg hybrid baby. Like the tumor fetus in The Brood, (see below) the Demon Seed baby’s arrival is another famous moment in sci-fi/horror history. On disc. 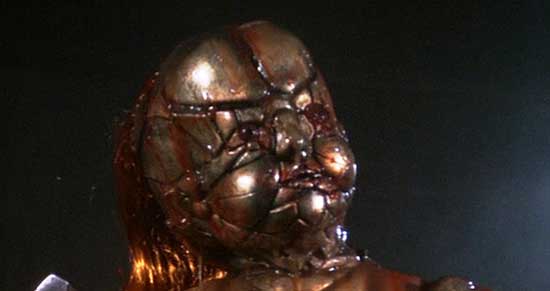 2.) The Brood (1979)
directed by David Cronenberg; starring Oliver Reed, Samantha Egger, and Art Hindle. This early film by Cronenberg (Scanners, 1981; The Fly, 1986) features British actor Reed (Gladiator, 2000) as a dickish psychiatrist who has invented a new therapy called “psychoplasmics,” which mainly consists of bullying and traumatizing psychiatric patients until they grow disgusting tumors and pustules from their skin as a symptom of rage. One patient, Nola Carveth, (played by Egger) is very special; she grows fetuses out of her tumors. These fetuses are born and then grow into murderous little gnomes that kill anyone who makes Egger mad, including her abusive mother and passive father. Art Hindle (Invasion of the Body Snatchers, 1978), co-stars as the concerned husband trying to drag his wife away from the doctor’s “treatment.” The segment depicting the birth of a bloody tumor “baby” is one of the most famous birth scenes in sci-fi/horror history. On disc and streaming. 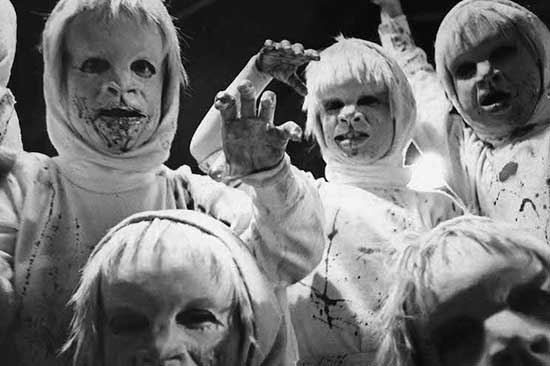 1.) Rosemary’s Baby (1968)
directed by Roman Polanski; starring Mia Farrow, John Cassavetes, and Ruth Gordon, based on the novel by Ira Levin. This is one of the greatest horror films ever made and of course, deserves the number one slot for this category—did you think it would be anything else? A very young Mia Farrow (The Purple Rose of Cairo, 1985) plays Rosemary Woodhouse, a new wife who moves into a creepy old Manhattan apartment building with her husband Guy (Cassavetes), an actor struggling for parts on Broadway. (The apartment building is IRL the famous Dakota co-op, home of celebrities and wealthy socialites, outside of which Beatle John Lennon was shot to death in 1980.) Her neighbors, Minnie and Roman Castevet (Gordon and Sydney Blackmer), are disturbingly eccentric, and she keeps hearing people drone and chant at odd hours of the night. Then she gets pregnant, and has a Devil of a time with her pregnancy. Her baby is born with his Father’s eyes, and Rosemary has to decide if he’s too freaky to raise as her child—or if his other qualities make up for it. On disc and streaming. 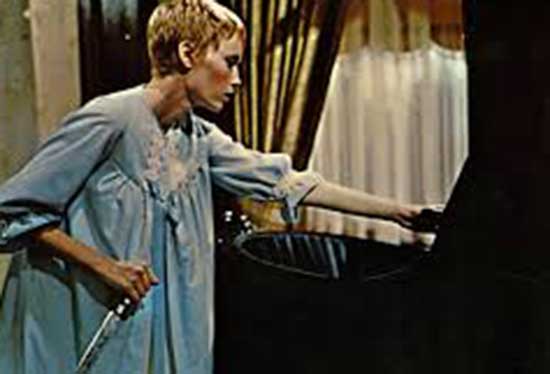 Species (1995), directed by Roger Donaldson; starring Ben Kingsley, Forest Whitaker, Michael Madsen, Marg Helgenberger, Natasha Henstridge and Alfred Molina. In this sci-fi hit thriller that spawned numerous sequels, a secret government project crosses human DNA with alien genes to create a hybrid human/alien female named “Sil” (Henstridge). After escaping and hooking up with a human male, Sil gives birth to a child that can appear as an adorable Gerber baby, but quickly morphs into a reptilian dwarf that kills things with its long, pointy tongue. Events don’t turn out very well for mother and child, but the birth scene is awesome, especially for 90s CGI. On disc and streaming.