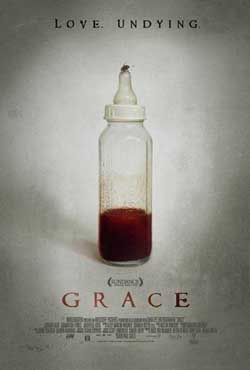 If your child had special needs would you be able to provide for it, even if it means going against your beliefs? What about if what your baby needs causes you to harm someone else, or murder? Madeline Matheson’s beautiful little girl Grace is about to see just how strong a mothers love can be.

I was beginning to get close to writing North America off as far as new film releases go. Lately it just seems to me that North American horror films are simply sequels or revisions of classic “monsters” given a new breath of life. Originality it had seemed was coming from other countries; even those films to a snob are simply revisions of older films (for example the recent French film Frontier(s) and Tobe Hooper’s The Texas Chainsaw Massacre). I however began reading about a new film online, and when I was given the opportunity to review it I was excited. The film I am talking about is Paul Solet’s debut film Grace.

Grace tells the story of a woman named Madeline Matheson who is as normal as can be to the viewer’s eyes. In the beginning of the film we watch Madeline and her husband Michael having sex, but this isn’t enjoyable sex, Madeline stares off up at the ceiling almost as if she is waiting for it to be over. A few scenes later of course we realize why we were shown this scene as we now witness that Madeline is pregnant.

Pregnant life for anyone isn’t easy, but for Madeline it is down right torture. There are a few facts you should know about Madeline, first thing is that she is a vegan (she actually watches animal testing videos in several scenes). The main contribution to her misery however is her mother in law Vivian Matheson, played very well by Gabrielle Rose. If Vivian isn’t complaining to Madeline she is complaining to her son, who has obviously dealt with his mothers savage tongue all of his life. Vivian also will turn her spite to her husband, who in all reality just seems like a friendly old man who wants everyone to get along.

Vivian has several disagreements with Madeline’s life style, she doesn’t like the thought of Madeline raising her grandchild up a vegan (she tells a story about how a woman starved her child). Vivian’s main problem is that Madeline desires to have a natural child birth, not in a hospital. Vivian just sees all of the problems that could occur with having a midwife, and finds that the hospital would be a much safer place for her grandchild to be born.

During all of this of course we are introduced to the character Patricia Lang. Patricia runs a facility that has everything that Madeline will need so that her child’s birth will not just be safe, but also more relaxing. She claims that this type of birth would bring the mother and baby closer, and after showing Michael some paper work claiming the safety of the natural birth they decide to sign Patricia on as their doctor. During this interview we learn that Madeline and Michael have also tried before to have a baby, Patricia’s sympathy is genuine and the couple is happy with their choice. This of course infuriates Vivian who wanted Dr. Richard Sohn to be the doctor in charge.

I stated earlier that Madeline was a vegan; the thought of eating meat repulses her. However Madeline still cares somewhere for her husband and still cooks him a steak for dinner. She is repulsed as she watches him eat; he still genuinely thanks her for the meal. During the clean up however Madeline begins to have chest pains. Quickly Michael gets her to the hospital, the entire time Madeline is asking for her doctor Patricia Lang. Vivian of course calls her choice in doctor Dr. Sohn to the scene, in what is a great scene Patricia storms into the ER where Madeline is and immediately begins to take charge. You see Dr. Sohn wants to induce labor (which would kill the child), Patricia believes it is just a gallstone and is proved correct once the proper procedure is followed.

During the ride back from the hospital however tragedy strikes the young couple. They are involved in a car crash that leaves Michael dead, and Madeline doesn’t feel her baby moving anymore. The next few scenes are glimpses into insanity as Patricia explains to her assistants that yes she realizes that Madeline’s baby is dead, but she is going to let her carry the child for three more weeks (so that it will be full term) and give birth.

After a disturbing sequence in which we witness Madeline’s water break in a store we are treated to an equally more disturbing scene in which the dead baby is delivered. The scene is very disturbing, but like the rest of this film it is disturbing with taste. Patricia leaves Madeline alone with her dead infant and finally after a while she decides its time to let Madeline know that her child is not alive. Imagine Patricia’s surprise when she goes into the room intent to tell the young mother that she can’t will her child alive, only to find that the child is crying and beginning to nurse. Madeline looks up at the camera smiling and informs her that her babies name is Grace.

Grace is of course a miracle baby, and like all miracles everyone wants to find out what happened and why it is that way. Vivian has officially lost it at this point, she has lost her son in the wreck and now Madeline won’t speak to her about her grandchild. Patricia of course has been making frequent stops over and starts to become a bit overbearing with her gifts, almost as if she has developed a love interest in Madeline and Grace, which she has much to the dismay of one of her assistants who has taken to lying to Patricia when Madeline calls. The assistant however should say something because Grace is no ordinary baby; first the young babies hair begins to fall out, then there is that thing with all the flies that won’t leave the infant alone, then there is that strange stench that just won’t wash away. If those aren’t enough to send Madeline into a fit, wait until you see what Grace wants to eat.

Honestly I had no idea what to expect when I first watched Grace. My first though was maybe that the director was trying to do a reimaging the vampire, brought on of course by Twilight and the rise in the vampires popularity again. Grace however is a completely different monster. Grace doesn’t hurt anyone, but she drives others to hurt so that she can live. The main horror in this film in my opinion is how Madeline changes everything about her beliefs just to take care of her child, a situation any parent would do. Yes I will add that this movie can be terrifying to parents, and I really wouldn’t recommend it to expecting parents.

There are a few scenes that parents, especially inexperienced ones, can relate to. One of these scenes is the very first time one of the flies finds its way into Graces room. Madeline frantically chases the fly around with a rolled up magazine intent on killing anything that might harm her baby. Madeline also forgets all about her repulsion to raw meat, as she quickly buys a bunch of it just to drain the blood into a bottle to give to her hungry child.

Everything about Grace works too; the cast is top notch even in some of the more over the top roles like Vivian. The direction and camera work is also top notch with this one. As far as the gore hounds go though there isn’t a whole lot, there is however a few scenes for you. The gore scenes in Grace however aren’t the fun kind of splatter that most of you are used to, these scenes bring the pain right to you, and you can almost feel the pain when you watch them (again this is due to the excellent direction of the film).

I know that Grace has been touring the festival circuit, and it is having some theatrical release. This upsets me in some ways, Grace is a refreshing new entry into North American horror melting pot, and honestly I find it insulting that theatres across the country will all be showing the newest genre sequel or remake, but will show no love for an original film.

Grace definitely comes with my highest recommendation, and it has restored what faith I lost in North American genre cinema. I honestly can’t wait to see what Paul Solet comes up with next; we may want to keep our eyes on him. 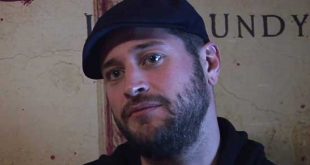