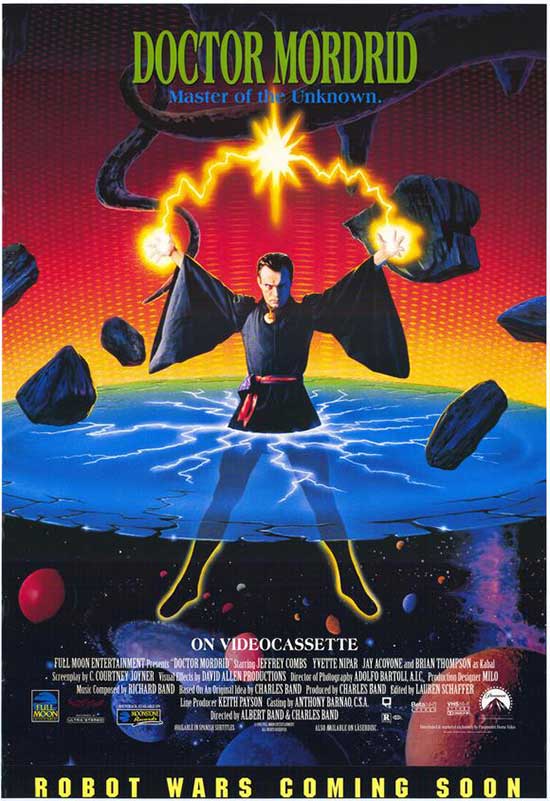 An unspeakable evil has come into our dimension and wants to rule over Earth, and only a mysterious sorceror known as Doctor Mordrid can stop him.

It may be hard to imagine this nowadays, but there was a time when Marvel wasn’t as careful with licensing for movies based on their properties. This is what led to Roger Corman producing a low budget Fantastic Four movie in the 1990s that never got officially released (but apparently there are bootlegs of it floating around). If what I’ve read is correct, Full Moon Studios had the rights to doing a Doctor Strange movie at one point. However, they ended up losing those rights. I’m not sure how far along production Full Moon was at the time, but I’m guessing they had too much invested to just let the project die. They just tinkered with the story, changed a few details, and made their own film centering on a heroic sorcerer, Doctor Mordrid. 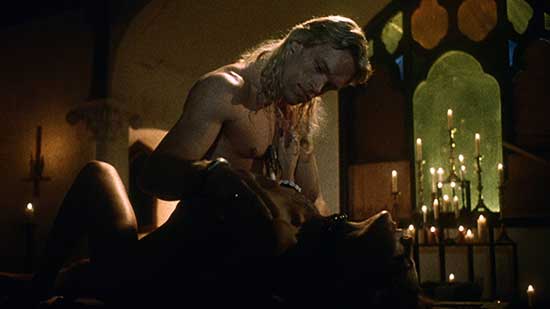 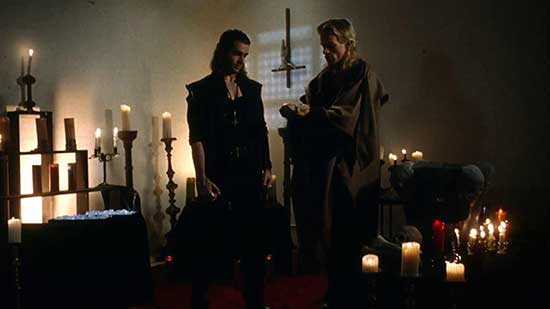 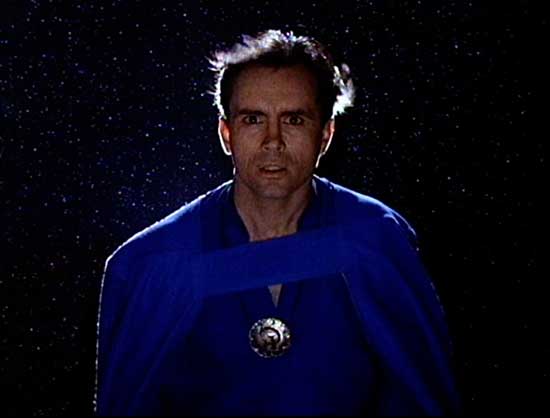 In Doctor Mordrid, Jeffrey Combs plays the titular character, a powerful magic user who has been watching over mankind for several centuries. He learns that a long time nemesis of his, and an evil wizard named Kabal, has escaped his imprisonment and is now on Earth. He is enacting a plan to bring down mankind and rule over what’s left of our planet. It’s up to Mordrid, with the help of an analyst for the New York Police Department, to stop Kabal before he succeeds in his plan.

It’s hard not to believe that what I read about this movie’s backstory. Everything about this film screams “Doctor Strange”. From some of the arcane symbols we see, to Mordrid’s outfit, and even the fact that he has some kind of cosmic being he answers to is just too reminiscent of Marvel Comics’ own master of the mystic arts. Even the name of the film is a little too similar. The filmmakers changed just enough to avoid getting the pants sued off of them, but they had to be walking the razor’s edge with this production. Despite borrowing heavily from Marvel, there’s still enough here to allow the film to stand on its own. The story, while a little trite, was at least entertaining, and it wasn’t afraid to show a bit of nudity and gore when it called for it (not something you’d see in most Marvel productions). 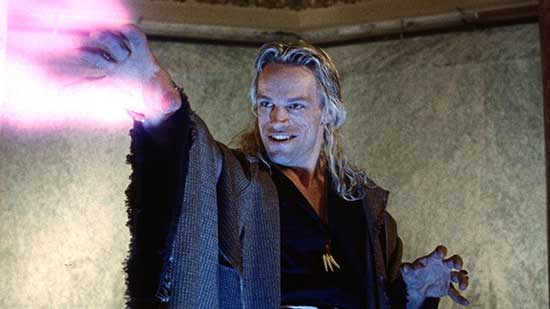 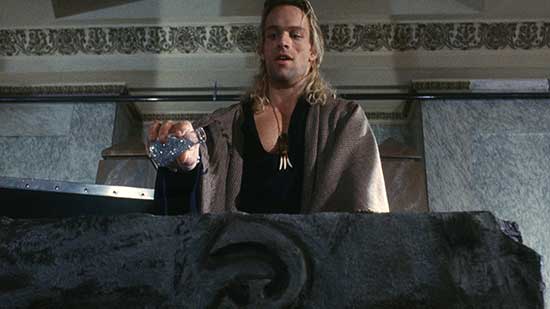 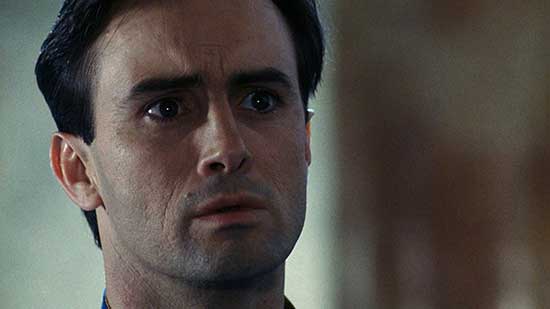 The real strength of the film is the surprisingly solid cast. You had characteractorJay Acovone who played the jerkass detective who is the first to jump to erroneous conclusions about Doctor Mordrid. The character doesn’t have much to do but be a jerk, but Acovone gives one heck of a performance with what he has. Yvette Nipar plays the women who ends up helping Mordrid in his fight against Kabal, and she does a great job of giving her character a sense of depth. She’s just a normal person getting caught up in something beyond her understanding, and you get a great sense of her bewilderment. However, it’s Brian Thompson that nearly steals the movie as the evil Kabal. He hamming it up a little throughout the whole film, and he looked like he had fun doing it. This wasn’t a character that gave long monologues, but there’s just something about how he carries himself and delivers lines that’ll bring a smile to your face. It’s always nice to see someone having a blast with their role..

Enough, however, can’t be said about how great Jeffrey Combs was. While known for being a character actor with a penchant for playing more villainous roles, Combs proved here that he had what it takes to be a leading man. He shows the right amount of charisma, charm, and compassion required for the heroic Mordrid. He owned every scene he was in. It was a low budget movie, sure, but there wasn’t a scene where he didn’t take the material seriously. If anything, Combs proved that when he was younger he would have made an amazing Doctor Strange had he had the chance to play the role. Combs has always been a fantastic actor, and his turn as Mordrid only showcases how truly great he is. 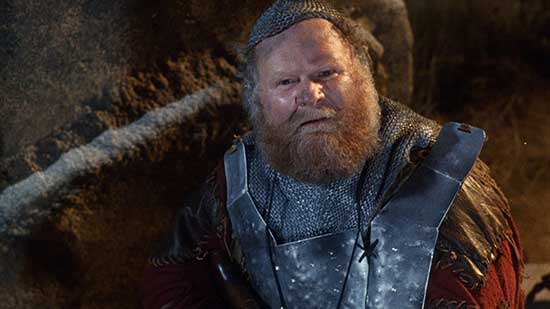 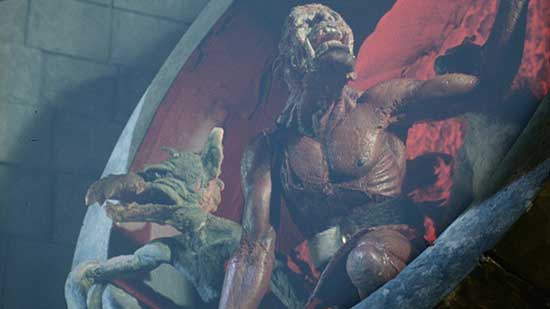 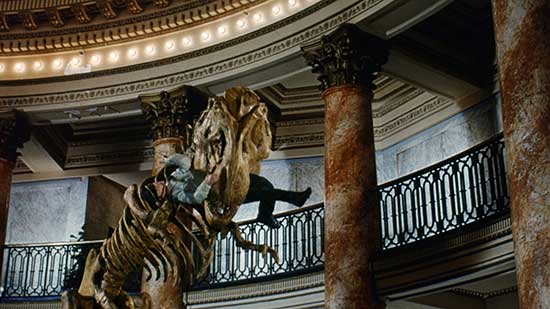 While the principle cast was fine, some of the actors in minor roles had a tendency to overact. One of Kabal’s henchman looked eerily like Andrew Garfield, like darn near could have been his dad. That really has nothing to do with anything other than it was kind of distracting to me. I’m also weird, so take that with a grain of salt. The story isn’t perfect, being a little trite and filled with more than a few plot holes.

The special effects were, at times, fairly cheesy and cheap looking, which, if you’re familiar with anything released by Full Moon, is not that surprising. Said effects weren’t completely awful, and there some effective use of stop-motion animation. Some of the set designs were fairly decent and there is some solid production value here. The overall direction and camera work here is actually pretty good. Nothing that’ll knock your socks off, but a lot more competent than a lot of the other torture sessions disguised as movies I’ve had to review in the past. 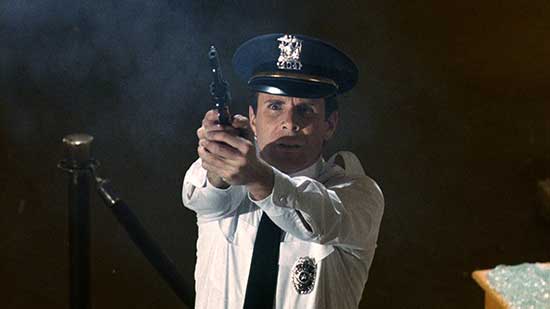 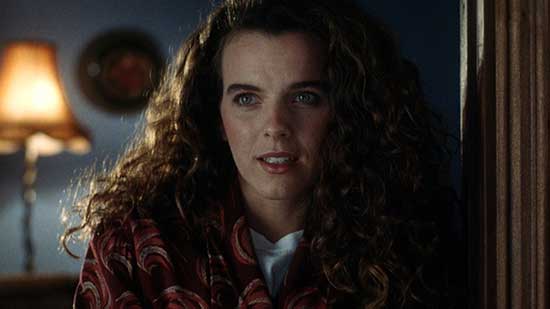 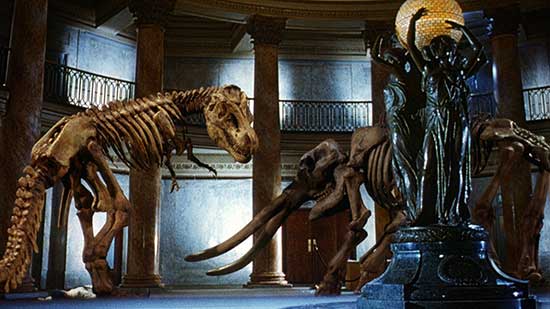 Overall, this wasn’t a great movie, but I didn’t find it to be a particularly bad movie either. It was a fun ride throughout it’s runtime, and that’s all I ask of low budget films. If you can look past the flaws, of which there are a few, you may find yourself enjoying yourself. I got a kick out of the film, and I was left wondering why Full Moon never followed up the movie with sequels. It’s obvious they intended to make a franchise out of it, like they did with Puppet Master and Subspecies and just about everything else they released, and they definitely had the right actor to be its main star.

Needless to say, I recommend checking out Doctor Mordrid.