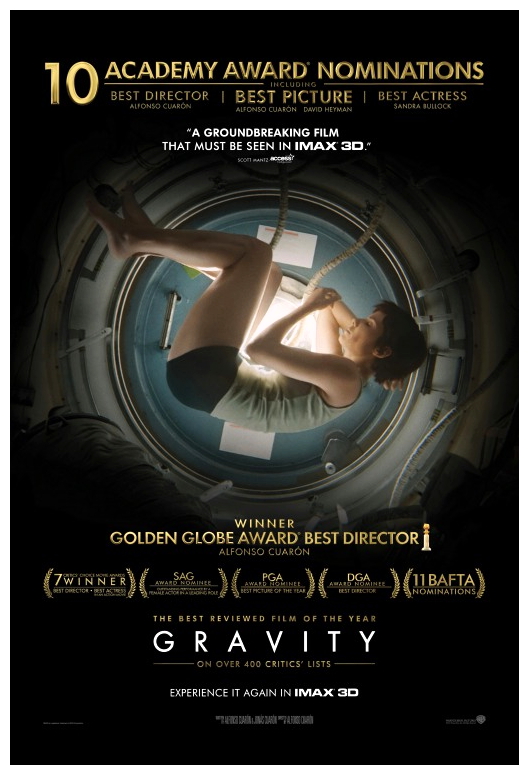 “The crew of the Space Shuttle Explorer is working on the STS-157 mission. Mission Commander Matt Kowalski, medical engineer Doctor Ryan Stone – who is on her first ever space mission – and flight engineer Shariff Dasari are on a space walk when they learn from Houston control that an explosion has just occurred at a Russian satellite. Before the crew can do anything about it, the explosion debris comes hurtling toward Explorer, irreparably damaging the shuttle and station, immediately killing all the crew except Kowalski and Stone, and knocking out at least incoming communication with Houston control, although they have no idea if there is outgoing communication.” (courtesy IMDB)

The first Mexican filmmaker to win an Oscar for Best Director is Alfonso Cuarón, best known for heavy dramas like A Little Princess (1995), big-budget fantasies like Harry Potter & The Prisoner Of Azkaban (2004), and dystopian science fiction like Children Of Men (2006). Alfonso’s brother Carlos Cuarón and his son Jonás Cuarón are also filmmakers and they often write together. Gravity (2013) was directed by Alfonso Cuarón from a script written by both Jonás and himself. However, Cuarón never intended to make a movie set in space. Even before conceiving the story, Cuarón knew he wanted to focus on adversity, and discussed a number of survival scenarios with Jonás involving hostile, isolated locations, like the desert. Inspired by these discussions, the father-and-son team later released another survival film entitled Desierto (2015). Finally, Cuarón decided to set his film in an extreme place where there is absolutely nothing. 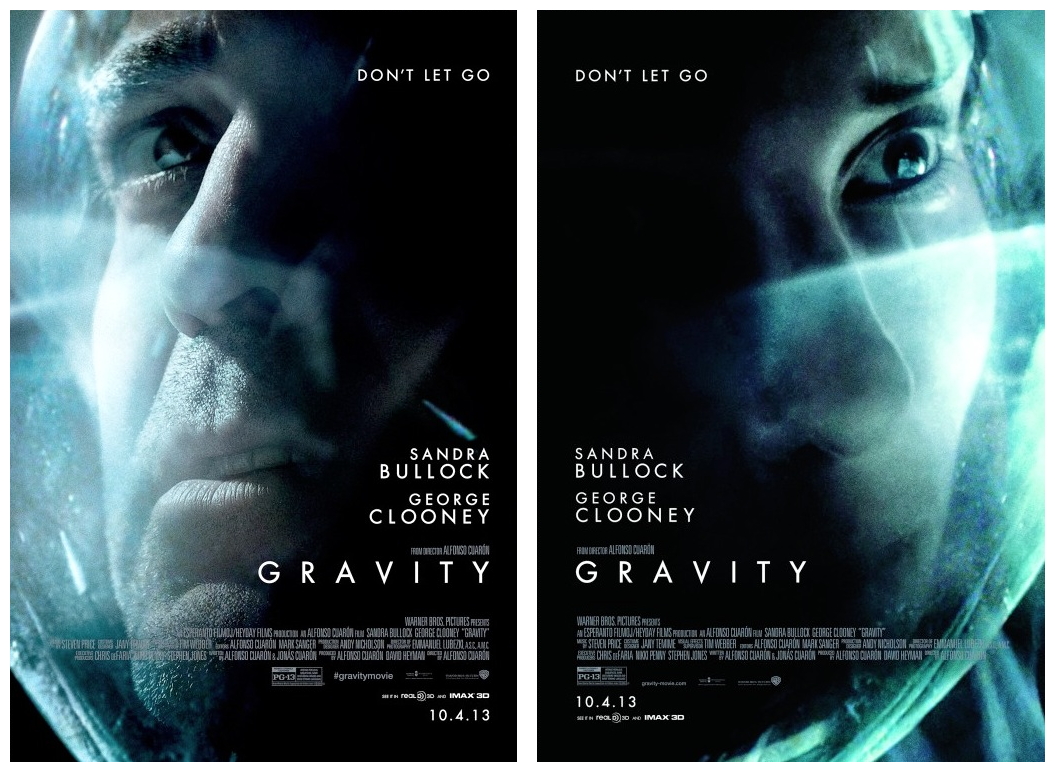 “I had this image of an astronaut spinning into space away from human communication. The metaphor was already so obvious. I was very intrigued by my son’s sense of place in a life-or-death situation that dealt primarily with a single character’s point-of-view but, at the same time, placing the story in space immediately made it more expansive and offered immense metaphorical possibilities. The concept of space was interesting to us both. It is a setting where there is no easy way to survive, thousands of miles from what we call home, so it was perfect for a movie about surmounting adversities and having to find your way back. We also wanted it to be a realistic story, which required us to do extensive research to become familiar with space exploration in order to depict a plausible scenario.” Many science fiction films have capitalised on the primitive horror and inescapable uneasiness we feel when confronted with the void of outer space. 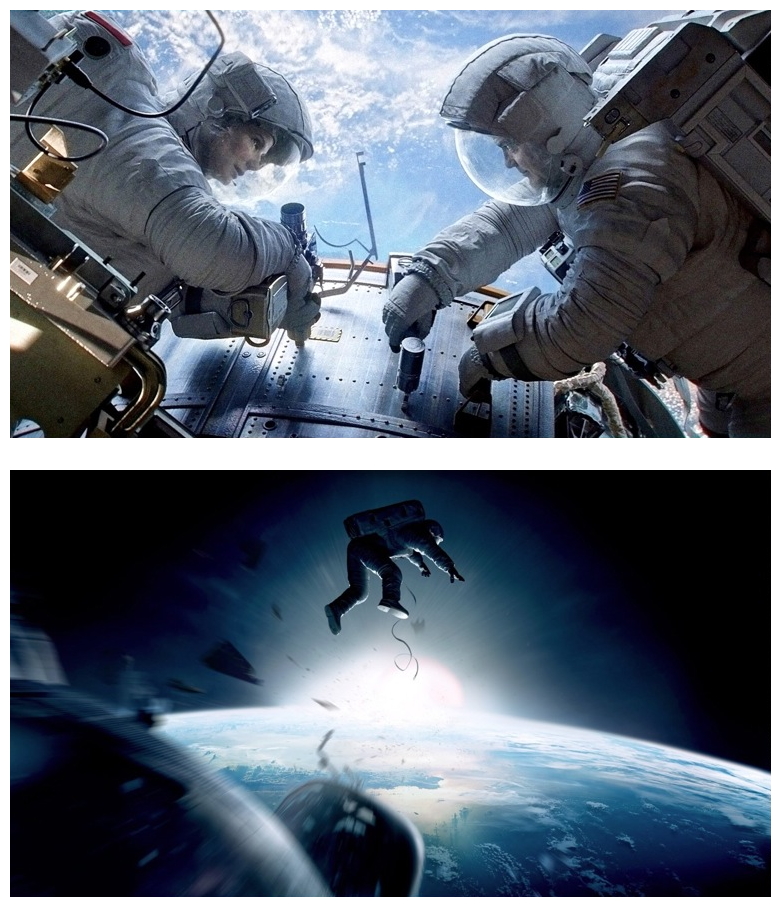 However, most space films – from silent classics to the contemporary – focus on the supernatural elements to hold our attention: Ferocious extraterrestrials; bizarre planetary landscapes; starry spirits; etc. When Cuarón first began writing Gravity, it was the drama inherent in real-life situations and possibilities in space which drove him. Producer David Heyman: “Every screw or piece of junk that has been dropped or left behind is orbiting at an incredible speed and if, or when, they collide, they create still more debris. It is life-threatening for the astronauts, the spacecrafts and possibly for us here on Earth too. It’s a real issue.” This scenario is known as the Kessler syndrome, named after NASA scientist Donald J. Kessler, who first proposed the theory in 1978. A cascade involving an object the size of the International Space Station would trigger a catastrophic chain-reaction of debris, and the orbiting debris field would make it impossible to launch space exploration missions or satellites for many decades. It is this realistic probability which forms the central lynchpin in Gravity’s story. 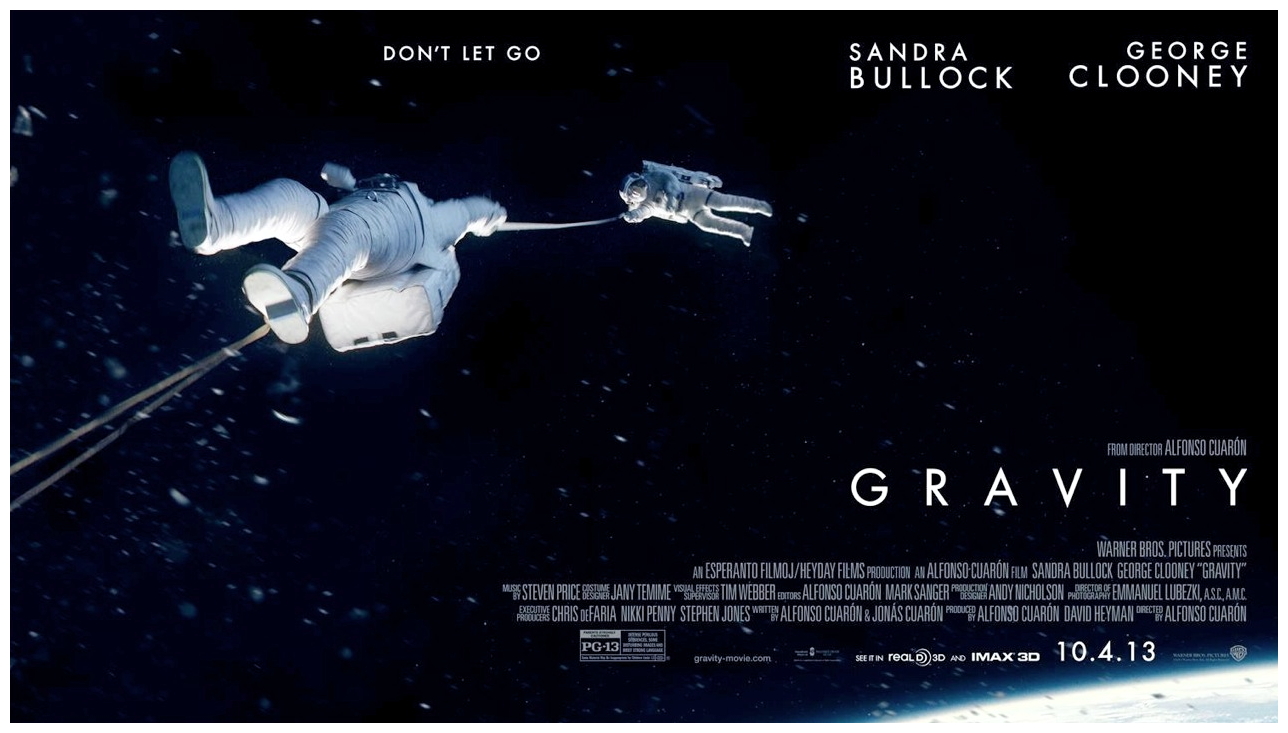 Novice astronaut Ryan Stone (Sandra Bullock) and veteran mission commander Matt Kowalski (George Clooney) are experts in their chosen fields, but at opposite ends of their careers – Stone is on her first mission, while Kowalski’s on his final expedition. They are completing standard maintenance work when their shuttle is obliterated by man-made debris, leaving them untethered and with no ability to communicate with Mission Control thousands of kilometres below. This puts the pair in an all-but-fatal position, and a terrifying one at that. The two are left in a precarious position as Stone is losing oxygen, meaning that Kowalski has to retrieve her quickly if she has any chance of survival. Even if he can retrieve her and get some oxygen to her, they have the difficult task of trying to get to another satellite with whatever equipment is on hand, and from there ultimately back to Earth. Through the process, they are often on their own without the other leading to an extreme feeling of isolation which leads to individual questions and ultimate decisions about their own mortality and what may be best for the other at the expense of oneself. Psychological resilience, determination and literally on-the-fly improvisation are imperative if the scientists want to make it home alive. 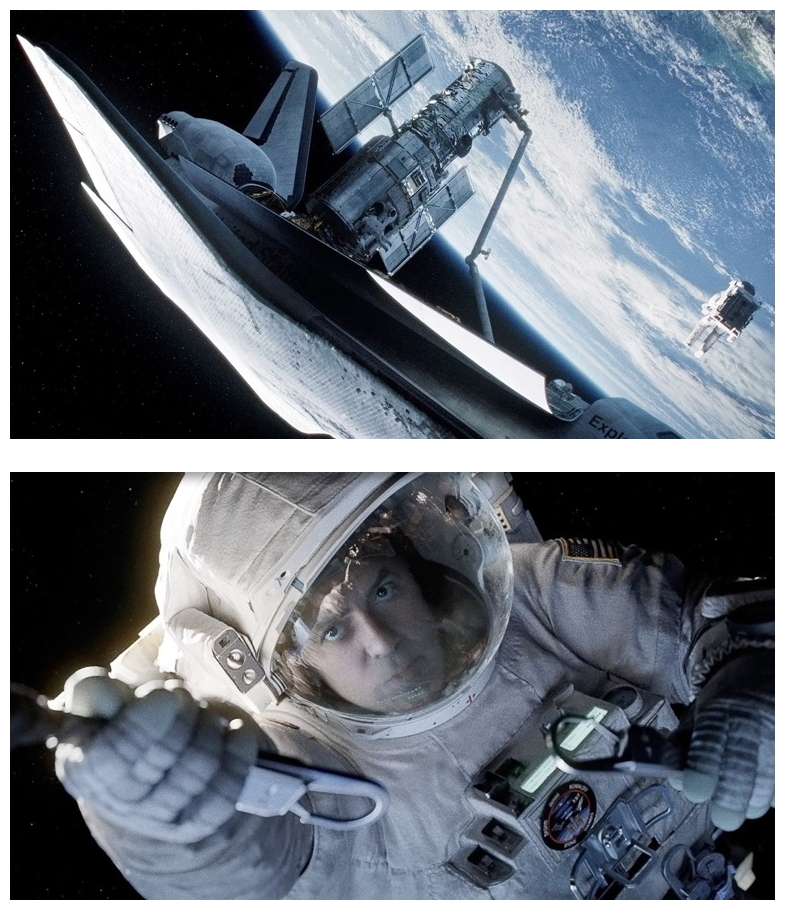 Cuarón’s two lead actors found the scope of the film’s meanings also tied in with the things they had learned from real-life astronauts who had been in situations wherein Gravity‘s hellish occurrences could have actually happened. For the female lead, no fewer than ten actresses (Angelina Jolie, Marion Cotillard, Blake Lively, Naomi Watts, Carey Mulligan, Scarlett Johansson, Sienna Miller, Abbie Cornish, Rebecca Hall, Olivia Wilde, Natalie Portman) were considered to play the role of Doctor Ryan Stone before casting Sandra Bullock: “I used to think that astronauts wanted to go into space for the thrill and the adventure. When I spoke to them though, I was moved by their deep, deep love of that world and the beauty of Earth from their perspective, seeing the oceans and mountain ranges and the lights of the cities. It’s amazing to realise how small we are in this massive universe. It is heartbreaking to think about not only the destruction of this planet, but also about what we don’t see – the trash that is literally orbiting above us.” 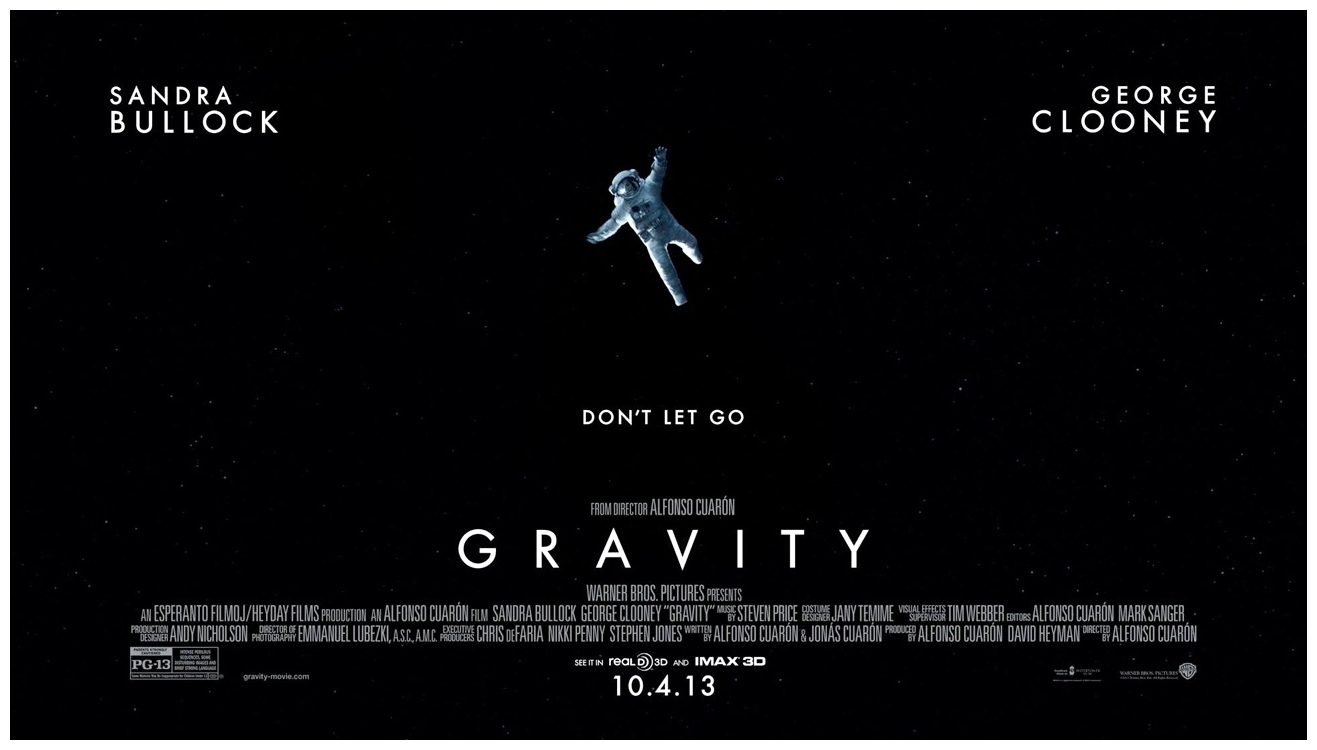 Beating ten other A-listed actors (Robert Downey Jr, Daniel Craig, Tom Cruise, Tom Hanks, Harrison Ford, John Travolta, Bruce Willis, Russell Crowe, Kevin Costner, Denzel Washington) to the role of Commander Kowalski, George Clooney echoes Bullock’s esteem for those men and women who are innovators spearheading the arena of the great unknown: “I grew up with the Space Race, I am a child of that era. I have always loved the idea of space exploration and am in awe of the people who do it. They are the last of the great pioneers.” If the film’s dialogue seems a little insubstantial, Clooney’s charming commander and Bullock’s space cadet more than make up for it. Though not as fully realised as, say, Sigourney Weaver‘s Ellen Ripley in Alien (1979), Bullock brings enough strength to her character to make Ryan Stone a convincing science fiction heroine. She is at her best during the film’s calmer moments, particularly in one revealing scene that suggests why she opted to travel into space in the first place. 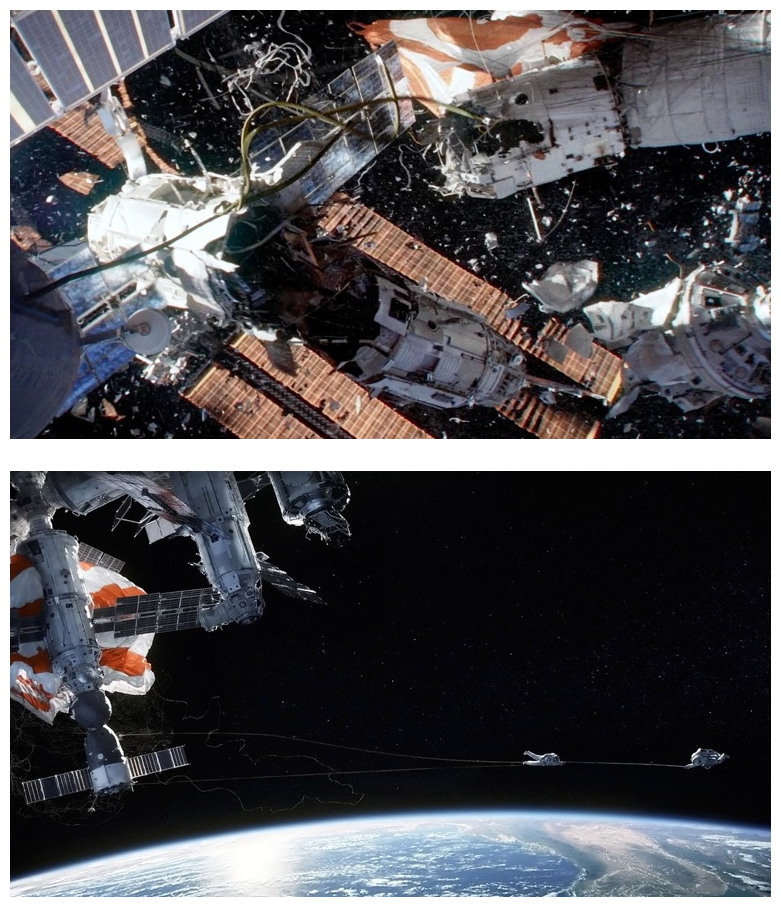 This 3-D disaster film works, not in spite of Cuarón’s intelligence, but because of it. Employing the same style used in his earlier films – as evidenced by the long opening shot (12.5 minutes!) of the orbiting shuttle coming into view – Cuarón surrounds us in the spectacle of space before unleashing the metallic tidal wave that destroys everything in its path. Throughout the groundbreaking shooting schedule, Bullock spent most of her time encased in a ‘light-box’ – cinematographer Emmanuel Lubezki had a huge screen of 1.8 million individually controlled LED lights folded into a nine-foot cube, put the actor inside, and used the light from the screen to light the actor. That way, rather than moving the actor in the middle of static lights, the projected image could move while they stayed still, allowing the visual effects team to capture the weightlessness of space flight. Cuarón avoids the rapid editing style of most action films, giving the audience time to contemplate Stone’s predicament and feel the tension rise as the metal tsunami once again makes its way toward her. 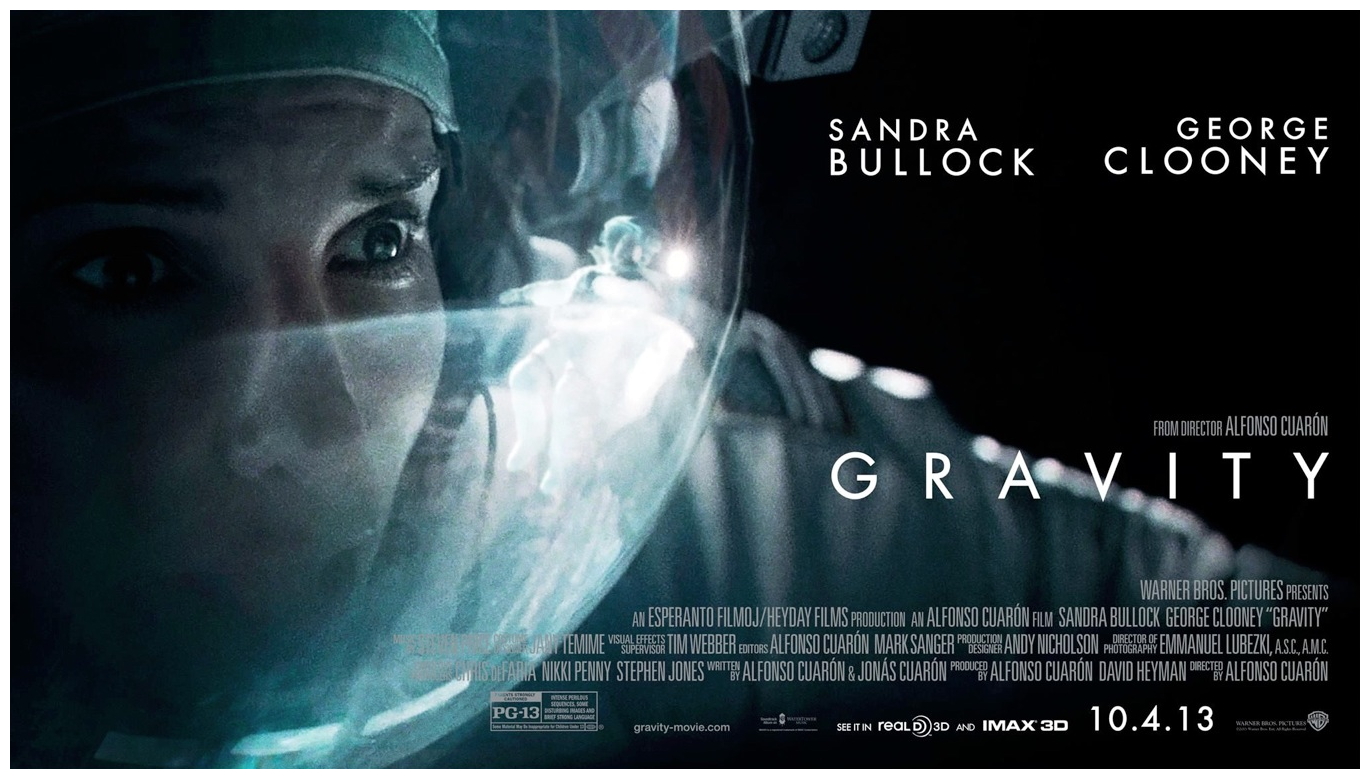 Rotten Tomatoes: “Gravity is an eerie, tense sci-fi thriller that’s masterfully directed and visually stunning.” Matt Zoller Seitz: “A huge and technically dazzling film and that the film’s panoramas of astronauts tumbling against star-fields and floating through space station interiors are at once informative and lovely.” Justin Chang: “It restores a sense of wonder, terror and possibility to the big screen that should inspire awe among critics and audiences worldwide.” Richard Corliss: “Daringly and dextrously with point-of-view – at one moment you’re inside Ryan’s helmet as she surveys the bleak silence, then in a subtle shift you’re outside to gauge her reaction. The 3-D effects, added in post-production, provide their own extraterrestrial startle – a hailstorm of debris hurtles at you, as do a space traveller’s thoughts at the realisation of being truly alone in the universe.” Gravity received ten Oscar nominations (including Best Actress and Best Picture) and won seven, including Best Director, Best Original Score, Best Cinematography and Best Visual Effects. 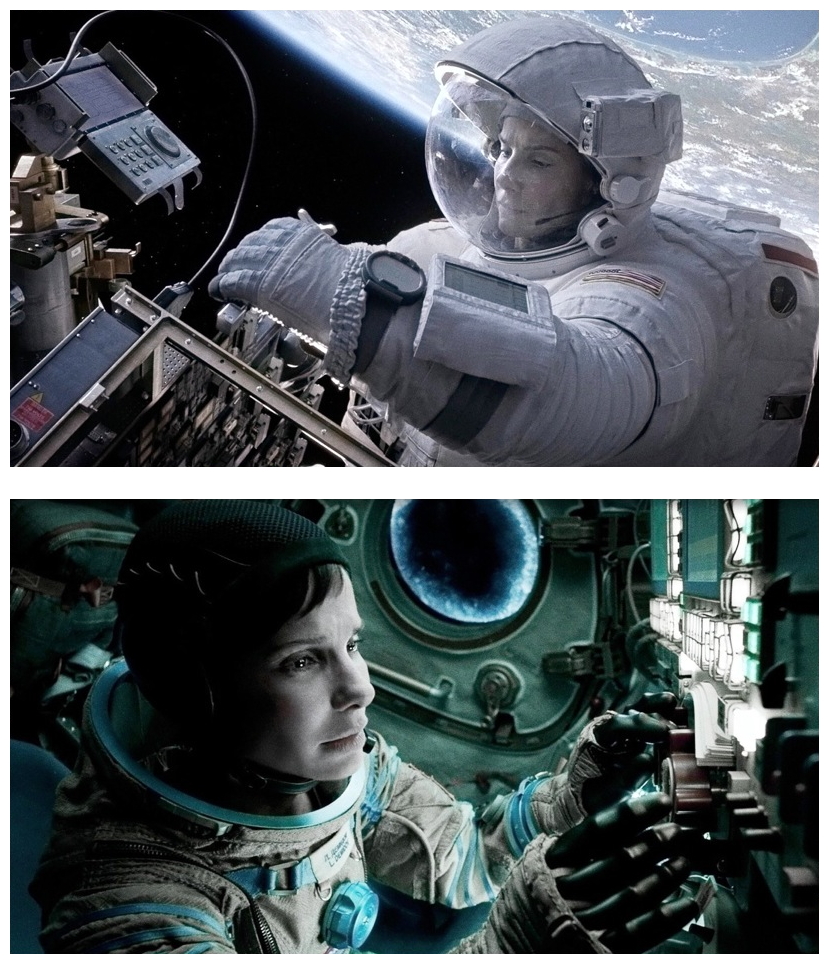 Finally, I wish to bring to your attention a short film called Anigaaq (2013) directed by Jonás Cuarón which was included on the DVD I recently viewed. Midway through Gravity, Stone manages to make random radio contact with someone on Earth. Unaware of who the man is, her spirits are lifted at the sound of a crying baby and a barking dog. In the short film, we are on the other end of the line, in Greenland, as an Inuit fisherman is camping on the ice over a frozen fjord. Aningaaq is trying to tell Stone that one of his dogs is very sick, and he has to put it out of its misery. The inspiration for the short film came to the Cuaróns when they were doing location scouting for a different movie in Greenland. In a deserted area where normally only seals live, they encountered a lone Inuit fisherman who was very hospitable, and invited them over. They wondered what a man who lives all by himself in such a remote area would do if he had no one else to talk to, and so the idea for the short movie was conceived. It’s a touching addendum to Gravity, the grander feature that Jonás co-wrote with his father. Now it’s time to politely ask you to join me next week when I’ll have the opportunity to expose the very tenderest parts of your body to another awkwardly-probing journey through those damnable dank dells of Horrorwoodland for…Horror News! Toodles! 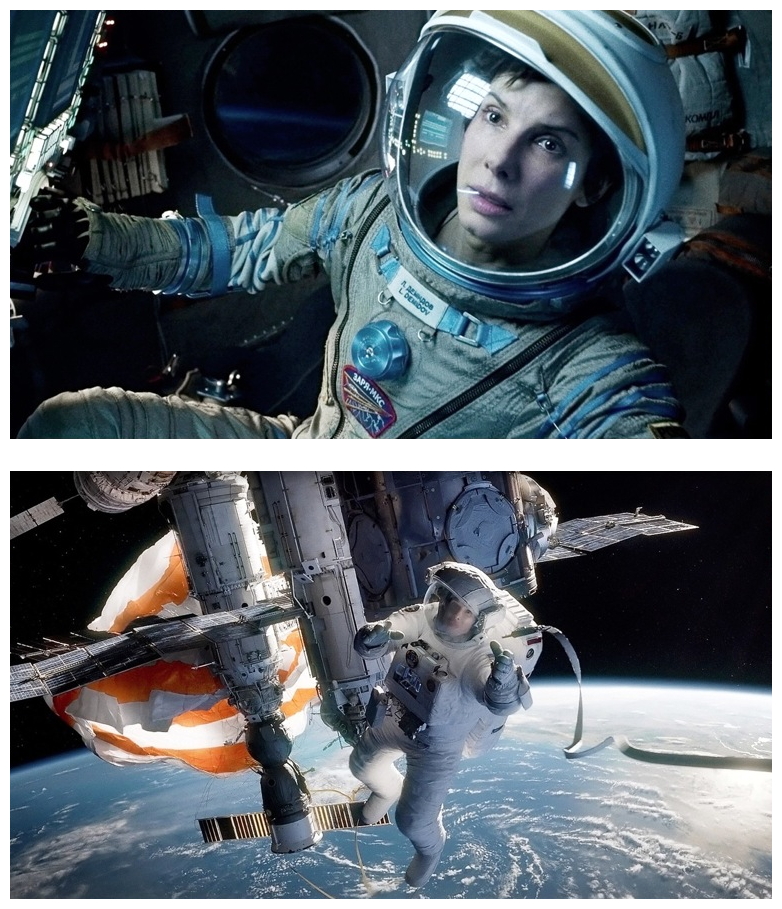 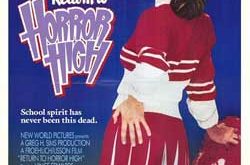