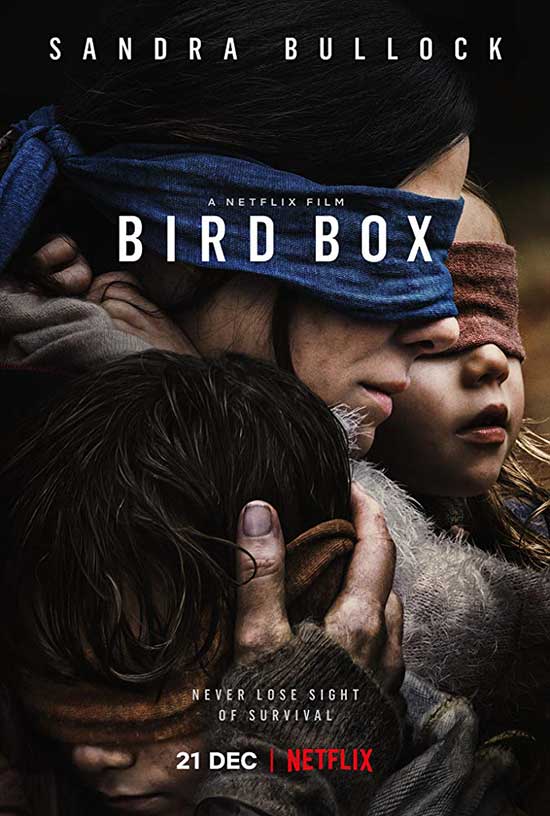 Five years after an ominous unseen presence drives most of society to suicide, a mother and her two children make a desperate bid to reach safety.

Remember this dilly from your history of idioms learned from both life and school: “the blind leading the blind”? It’s kind of the one that tends to have the words be remembered but not the source (it dates to the ancient Sanskrit texts of the Upanishads, written between 800 and 200 B.C., for those readying themselves for Jeopardy! competition). Attributed to the Katha Upanishad specifically, the entire parallel phrase reads: “Abiding in the midst of ignorance, thinking themselves wise and learned, fools go aimlessly hither and thither, like blind led by the blind”. The makers of Netflix’s latest horror-drama hybrid The Bird Box, play with this metaphor heartily as the prize toy in their chest. The twist here is that sight, rather than accidentally caused by an affectation of biology, is purposely brought upon one self to survive a hellish, unseen entity in Earth’s atmosphere. There is also little in the way of aimless bumbling going on. Really, the focus of the small core of characters is on an acutely driven instinct for survival and a single-minded goal to find a safe haven. With the hard-bitten Sandra Bullock leading the way, what could possibly go wrong? Ok, a lot.

Based On Josh Malerman’s 2014 best-seller, The Bird Box tells the story of a malicious presence in the air that causes people who catch sight of it (or them) to immediately commit suicide. A group of survivors, led by expectant mom-to-be Malorie, hole up in the home of survival-of-the-fittest type Douglas and try coming to grips with the insanity around them. The rag-tag bunch blindfold themselves and set out perilously for more food sources while their numbers dwindle. Action flashes forward frequently to Malorie and two children trekking desperately via raft down a local river rapids to a purported safe haven mentioned to them by a voice on a walkie-talkie. Can the trio or anyone in humanity escape the death that surrounds them?

Screenwriter Eric Heisserer adapted Malerman’s novel, changing some of the characters names and altering their backgrounds and motivations a bit. Malorie, a young college student in the original story, is now a more mature artist. Don becomes Douglas, the pessimistic doomsayer. And a few ancillary types are added to flesh it all out. Yet, Heisserer maintains the framework and thrust of events similar to that of the author. Events take place in three sections: the beginning, where incidents seem still far, far away; the middle, with the central players surrounded by chaos; and the final third flash forward years later with Malorie, Tom (another of the house denizens that Malorie developed an attraction for) and the kids struggling with the attempt at family and living in a cabin in the forest. Refreshingly, this style does not lend to a static, book-to-film feel that has befallen many a purposefully direct novel to script transfer in the past. Much of the backstory of the characters is stripped liberally to the raw, to the better service of the heightened emotions at play here, in my opinion. Nor does the paring down come at the expense of the prime theme here, the deeply embedded desire for self-preservation within each of us and the impenetrable bond of the maternal/paternal toward progeny. In fact, it is the latter that struck as intriguing for me amidst the horror show ambience as Heisserer seems, at times, more curious about the Malorie heroine and responses/reactions to being pregnant and her rather lack of readiness to be a mother than he is about the world being besieged by forces unknown. Or as much as, at least. Thank goodness for it, because layers make it all the more interesting.

Danish helmer Susanne Beir (of the superb Oscar-winning 2006 thriller A Better World), oversees the action with such a sure hand as to show a complete confidence and skill when it comes to pacing and editing here. No easy task in balancing slightly stagnant, dramatic moments with the frenetic pulse of blood and action set-pieces and unsettling, what’s out there bits without having one end up standing above the others. Kudos to Beir for sticking to her guns as it pertains to the antagonist creature(s) not being seen onscreen. Heisserer, in a story for bloody-disgusting.com, said a scene was filmed showing the creature, yet it’s appearance induced laughter more than fear. “It was snake-like, and I was like, ‘I don’t want to see it when it first happens. Just bring it into the room. We’ll shoot the scene.’ I turn and he’s like this [growling at me.] It’s making me laugh. It was just a long fat baby.” Of the scene, Beir added: “We’re going to deliver it to Saturday Night Live.”

Bullock and John Malkovich head an overall stellar cast of mostly vet actors here. Sandra has excelled in prior roles in the vulnerable yet tough variety and imbues Malorie with all of that and more. One can observe a hint of steel nerve in the eyes even as her body quivers in fright. Malkovich, as Douglas, has anti-social and eccentric down pat. Yet he always shades things with just a glimmer of humanity to him. At least enough for his characters to seem ever real and someone the viewer might just know in life. B.D. Wong, as the token gay character, manages to rise above the underwritten part to afford some sympathy. The remarkable Trevante Rhodes (Chiron of the Oscar-winning Moonlight) once again proves a true talent as the resilient, noble Tom, more or less the grounding element in the gang.

Credit to Beir, producers Clayton Townsend, Chris Morgan and Dylan Clark (along with six executive producers (Bullock was even one) and two associate producers) for not just relegating shooting to the Los Angeles area and opening things up by filming extensively along the Smith River in the Klammath Mountain region of Northern California. A simple, effective way to denote beauty and isolation (while also being convenient to show dread) in pretty much one stroke.

As I recollect more of the idioms and metaphors that my teachers and parents hammered me with in my youth, I could settle only on one, an aphorism from the 19th century German philosopher Friedrich Nietzsche) that sums up my view as to the dominating conceit of, and true theme behind, The Bird Box: “What doesn’t kill you makes you stronger”. Certainly a life lesson Malorie learns rather bluntly and quickly. Maybe we in actual life can take a cue as we are confronted with our own monsters?