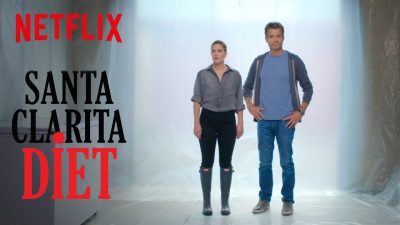 SYNOPSIS: In round two of this Netflix original series the Hammonds grow further into their demanding existence as a zombie led family in the sunshiney, yet stuffy world of Southern California suburbia.

REVIEW: Let’s jump right in here – Season 2 is better than Season 1. That is actually quite the compliment, as originally it took a few episodes to grow on me but I ended up really enjoying Season 1. By this go-round, the actors are quite comfortable in their characters, the premise of the series is well established and therefore it’s able to move forward with a greater strength and is far more adept with its own particular brand of humor. 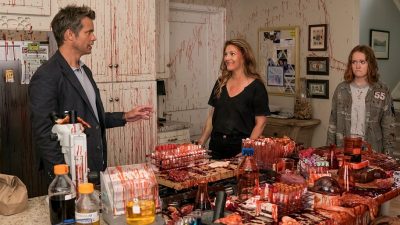 The basic concept is the same for both seasons – we follow the misadventure filled learning curve of the Hammond family as mom Sheila (Drew Barrymore) suffers – though not horribly – with a zombie virus. Meanwhile, loving husband Joel (Timothy Olyphant) deals with a burgeoning midlife crisis both inside and outside the realm of zombie enabler, and as always teen daughter Abby (Liv Hewson) and her best friend Eric (Skyler Gisondo) navigate through the everyday trials of teendom amongst the craziness of having an undead mom. 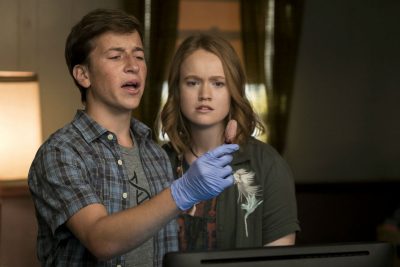 I mentioned, in my review of Season 1, that Drew Barrymore was fun to watch and an actor I have always enjoyed. It occurred to me at some point during this season that I did not feel like I was watching Drew Barrymore anymore but rather following the incredulous story of Sheila Hammond’s post-death life. Drew is not the only one who has fully embraced her character, Timothy Olyphant’s Joel has become quirkier, bolder and somehow more endearing than you imagined he ever would be. The kids remain stand out stars in their own right, never overacting or fading into the background even if they do have to play on standard teen tropes a lot of the time. (My ONLY complaint about the teenage characters is that you can tell Skyler Gisondo is far more buff  under the geeky shirts than his nerdy character Eric would be, but with spraying body parts and brain blob spiders to contend with I will not let that be the thing which stomps out my willing suspension of disbelief). There are some recurring side characters in Season 2 that come off as more enjoyable this time, like odd, overly religious cop Anne Garcia (Natalie Morales) and the weirdly wise shop clerk Ramona (Ramona Young). And, despite his early demise in Season 1, Nathan Fillion returns with the most memorable and perhaps enjoyable character of the entire series to date. 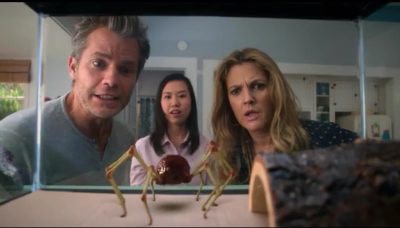 There is a motley crew of new characters that add to the this being a better season, such as Chris and Christa (Joel McHale and Maggie Lawson) rival realtors with darkly hilarious antics and Scooby-esque zombie hunters Paul and Marsha (Zachary Knighton and Jaee Young Han). We also get some weird creatures in this installment,  the aforementioned blob spiders which look like tiny brains with grape stem legs and some dubious ruby red, Serbian clams. Plus we get a few appropriately idiotic Nazis and a couple new zombies, all of whom are incredibly amusing to watch interact with the Hammonds.

One of the things that helped this season excel is that I began caring where the story went and how things would unfold. In my review of Season 1, I mentioned that it was an enjoyable watch despite being light on story and not really engaging the viewer in concern for the outcome. Rather, you keep watching because of the laughs and the talents of the cast. This time the story does a much better job of pulling you in and making you care. You will be rewarded for caring, there is a fresh explanation of the origins of this particular strain of zombism, some surprising twists and a particularly good final episode – that will definitely leave you wanting Season 3 to come around sooner rather than later. 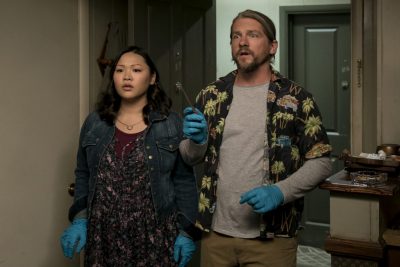 I know a lot of the fans of this show are not general horror fans and are put off by the violence and gore. Luckily for those of us who are horror fans, none of the show creators bowed to this sentiment as there is perhaps even more blood, guts and general violent delights in Season 2. I don’t think the series would be as good without the ridiculously blood-drenched mayhem, it’s one of the main comedic contrasts to the rest of Santa Clarita life and one of the things that keeps you coming back for more. I appreciate that this has remained a consistent element of the show and its storytelling, at it’s heart this is a zombie story and not a daytime soap opera. 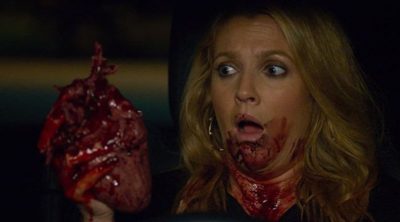 Both Seasons 1 and 2 are currently available in their entirety for streaming on Netflix. 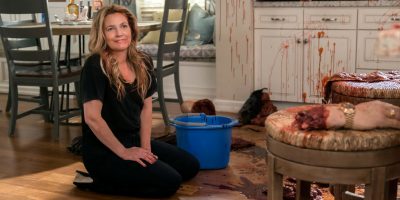