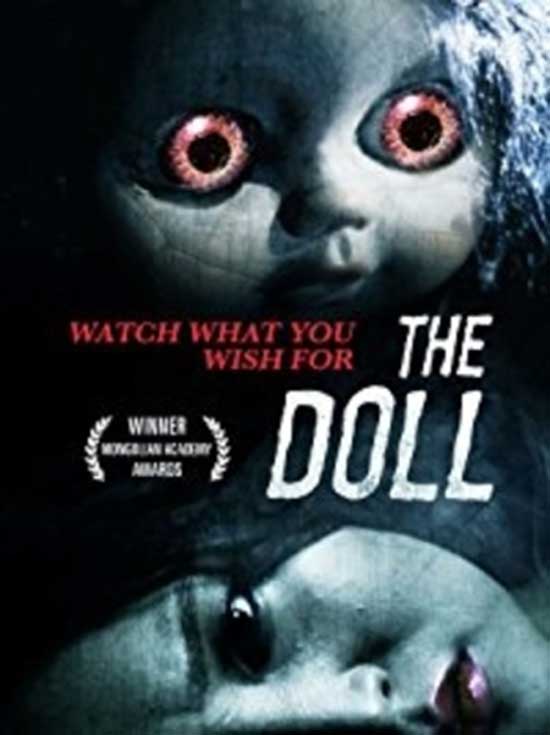 A troubled young woman buys a doll from a sinister street vendor and discovers that the doll has the supernatural power to solve all of her problems—or so she thinks.

Talk about obscure! This movie doesn’t have an IMDb entry and I couldn’t find a single professional review of it—or any further information about it—after several minutes of googling online. Which is too bad, because it’s an excellent horror film—except for a few confusing moments at the end—and it deserves much wider attention.

The Doll is made by a Mongolian director, B. Tsogt-Erdene, and the accompanying graphic helpfully notes that the film won an award at “The Mongolian Academy Awards.” But don’t let the obscurity factor keep you from watching it, because, on the whole,  it’s better than about 90 percent of the low-budget American horror films that are currently offered online.

The plot concerns a young, pretty office worker named Saraa (pronounced like “Sarah,” but with the accent on the second syllable: SaRAH.) She’s got a lot of problems: her mother is gravely ill; she’s behind on her rent and has received an eviction notice; her boss is a “handsy” perv who gropes her boobs at work. But one day she buys a doll from a sinister, toothless old man in traditional folk dress, and things start to change. 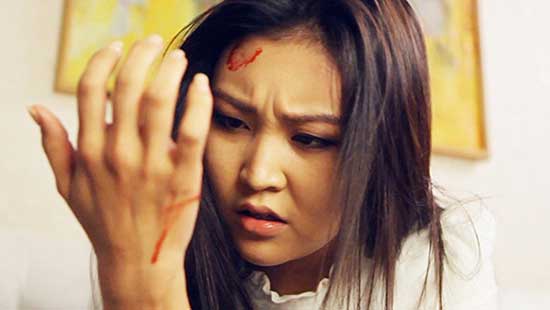 Aha! You may be thinking—it’s a Creepy Doll Movie. Yes, it’s true, and this film does share some of the tropes of that genre, but it adds a unique twist: the doll is a vampire. It eats human blood, and then it grants favors to those who feed it. Saraa discovers this by accident when she cuts her hand badly on a broken cup and bleeds all over the floor, then faints from the sight of the blood. While out, she has a dream or vision where she talks with the living avatar of the doll (a super-creepy apparition), who thanks her for the blood and tells her that she can now have any wish granted. Although she doesn’t really believe in the doll’s powers, she asks for money so that she can pay her rent and afford better medical treatment for her mother.

If you’ve ever read the famous W. W. Jacobs horror story, The Monkey’s Paw, or seen any of the many films and television episodes based on it, you pretty much know what’s coming. Saraa’s wishes are all granted, but they come with a downside that’s usually worse than the problem she’s trying to solve. Some of the money she needs, for instance, materializes when her pervy boss rapes her brutally, and then gives her a bundle of cash to keep quiet. It gets worse from there.

I’m unable to determine if the director is a man or a woman (I suspect it’s a dude), but whoever he or she is, they really know their Carpenter, their Wan, their Spielberg. This film references major Western horror tropes—flesh-eating zombies! In Mongolia!—without losing the best traditions of good Asian horror. For those who find the non-linear plotlines of many Asian films challenging, The Doll has a muscular, linear plot with only a couple of flashbacks—both of which are well-integrated into the story logic and are not at all confusing. Camerawork, lighting, and acting are all surprisingly professional. There are subtitles in English and the English translations are unfortunately somewhat wonky, but the film is plot-driven and very visual, so it’s not hard to follow along. That is, until the ending, which is confusing and feels somewhat forced. It occurs six months after Saraa finds a way to get rid of the doll, and it’s meant to offer a final twist on The Monkey’s Paw theme, but blurry imaging and wonky subtitles leave the viewer wondering exactly what the nature of the twist is supposed to be. I would have given this film a solid 7+/10 if it weren’t for the ending. I’m also not enthusiastic about the generic title. There are numerous films out there with the same name. When I was a kid, horror movies had memorable, evocative titles like Blood on Satan’s Claw or The House That Would Not Die. The cast and crew of this film put forth a lot of effort to create a unique viewing experience, so why not give it a title that stands out better? End of rant. The Doll is currently streaming on Amazon and Midnight Pulp.  6.5/10