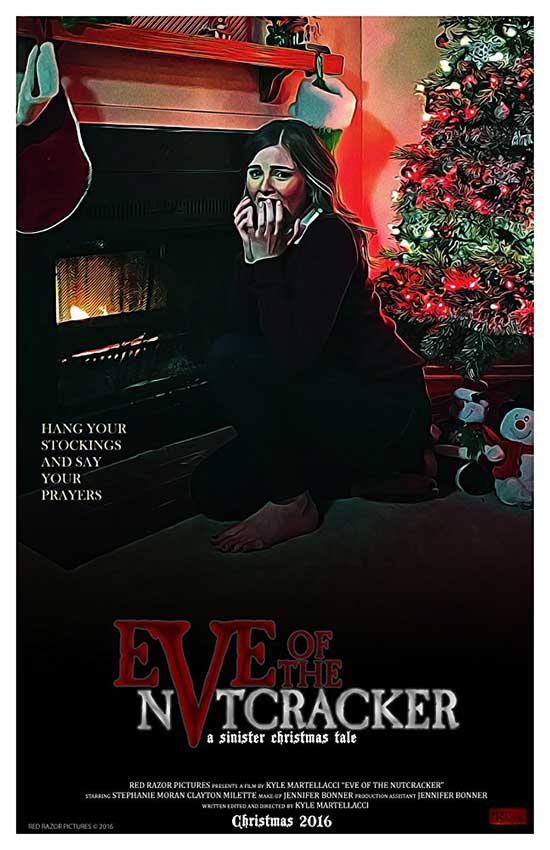 A disappointing Christmas Eve takes a turn for the worse when a young woman receives an ominous nutcracker as a gift.

More short films, kiddies! Today we have EVE OF THE NUTCRACKER, A short film from Canada written and directed by Kyle Martellacci.

We’ve all spent at least one miserable Christmas in our lives. The one that follows a divorce, or a break up, or a death in the family. Never a good time.

Olivia (Stephanie Moran) is having THAT holiday. She and her significant other are “taking a break” and so she is spending this eve alone. There is an unexpected present under the treee, though. A box containing a lovely traditional nutcracker. No card, but olivia assumes she knows where it came from. So on the mantle he goes.

But he doesn’t seem to like staying there. There is defintely something weird about this nutcracker, perhaps even sinister….

I do so love a holiday horror film. Christmas is one of those holidays that isn’t really synonomous with horror, and not every attempt to make such a film goes well. To be fair, this short doesn’t exactly break any new ground in the genre, but it is a well shot, well paced, nicely presented story. No wasted time, or unnecessary facts. Just a simple and straight forward story.

So using my special short scale of one to five, five being awesome, I’m giving this film 3 nutcrackers.