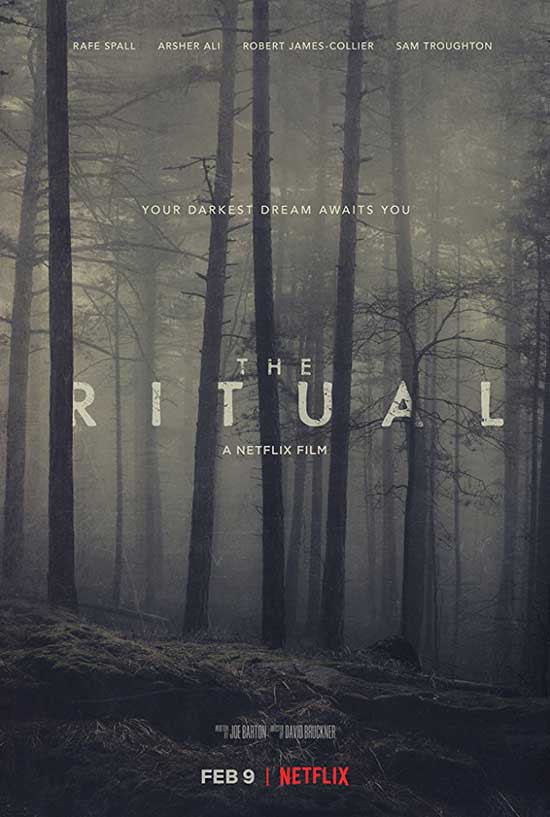 A group of college friends reunite for a trip to the forest, but encounter a menacing presence in the woods that’s stalking them.

The Ritual (2017), directed by David Bruckner of V/H/S fame. debuted at the TIFF Toroton Intl Film Festival ,then picked up by Netflix for U.S. streaming from February 9.

The plot concerns four old college buddies in their thirties, who embark on a hiking trip through a remote, mountainous region in Sweden. They plan to leave a tribute in the wilderness to the memory of a fifth buddy named Rob, who was senselessly murdered in a liquor store robbery gone bad. The group is led by Luke (Rafe Spall, Life of PI), who’s carrying a heavy emotional burden of guilt and regret: he was in the liquor store when Rob was killed, but hid behind a stack of shelves instead of helping his friend. The others include Hutch (played by Robert James-Collier, Downton Abbey), Phil (Arsher Ali, the British film Four Lions) and Dom, played by Sam Troughton (from the British series, The Hollow Crown).

The friends hike out into the rugged high country, find a suitable peak with a stunning view, and build a little cairn on it with stones and mementos of Rob. (Hence, “the ritual” of the title.) On the way back to their lodge, Dom injures his leg badly. (Dom is a chubby, non-athletic doofus, e. g. the Ned Beatty role from Deliverance; thankfully for the viewer, no one ever asks him to squeal like a pig.) The group then decides to take a shortcut through a dark, dense forest because the injured Dom can’t hack the regular, more rugged trail. 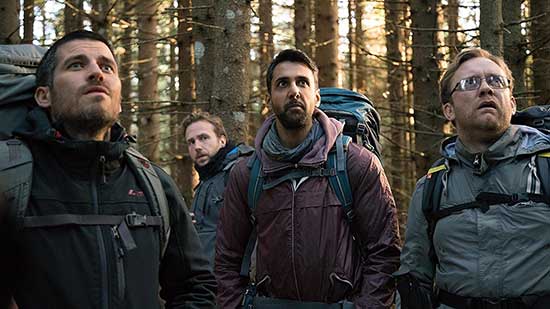 Their first inkling that this may not have been the best move occurs when they see a large elk hanging from a tree with its guts ripped out, still bleeding. Soon, they realize there’s a violent presence in the woods that’s stalking them, and they have to struggle for their lives while trying to find their way out of the forest.

As their troubles mount, the amiable camaraderie of the four friends melts away, and they start to bicker and backbite each other, which only makes their situation worse. (The shifting relationships and back-and-forth among the four men is one of the strongest features of the film.) Later on, after the forest entity draws first blood, a Swedish clan of what, in American terms, would be called “inbred hillbillies,” make a memorably unpleasant appearance and explain what’s going on to the survivors. At that point, without revealing too much information, Luke is offered a chance to redeem his earlier cowardice in the liquor store.

All of the above is competently filmed, well-paced, with decent suspense and gore, and very good acting from the four principals; especially sympathetic is James-Collier as the voice of reason, trying to keep everything together while events grow increasingly grim. In addition, when the evil presence is finally revealed, it’s something fairly original. Otherwise, however, The Ritual is probably too derivative to really impress an experienced horror veteran. 6.5/10