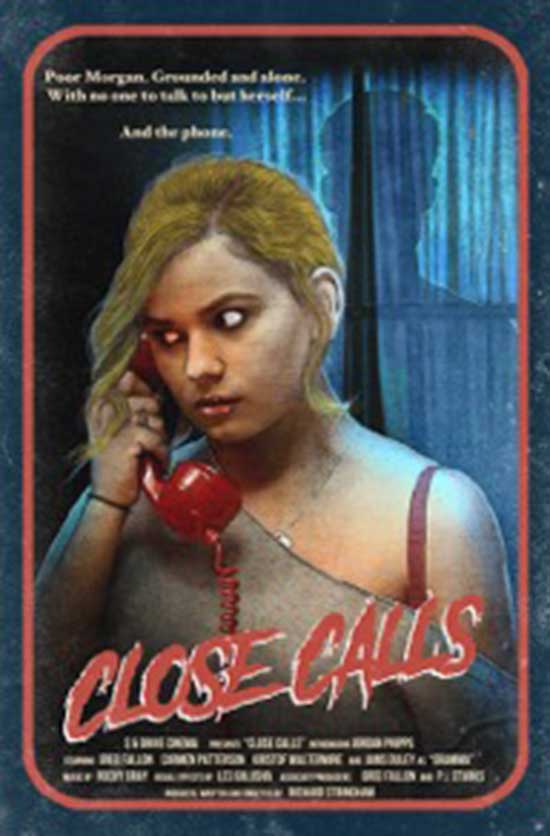 A rebellious teenager finds herself grounded one night and in addition to having to deal with her weird grandmother she also has to contend with a number of disturbing phone calls that she receives from an unknown caller. After using a ton of drugs things go from bad to worse for her when a man claiming to work for her father pays her a visit, and after everything is said and done she may not make it through the night alive.

I heard a lot of good things about writer/director Richard Stringham’s film Close Calls so I reached out to him and asked if he could send me a screener so I could check it out myself. Luckily, he did so and I am glad because I thought that it was a pretty decent little flick that had enough twists and turns to make anyone happy. It’s sort of a fever dream of a movie and that’s cool because I dig films like that so I wasn’t disappointed this time around. In addition to having an interesting premise, top-notch acting, and a well-written script it also had a nice 80’s horror film vibe to it and since I am such a fan of movies from that period I definitely approve. I had a great time with Close Calls and thought that it was a winner.

Though the premise is simple it works. We have a tale about a spoiled teenage girl named Morgan (remarkably portrayed by Jordan Phipps) that is grounded one night by her father (who could use some lessons in being a parent) after participating in some inappropriate behavior with a male friend. The dad heads out on a date with this total bitch that Morgan hates and takes her cell phone with him, leaving her to take care of her strange grandmother that lives upstairs in their house. Moran (who has an apparent drug problem) takes enough drugs to make Keith Richards happy and then starts getting strange phone calls on the landline from a creepy guy that makes a number of threats to her. From there weird things start to happen (such as the pictures in the house changing and becoming a lot creepier-looking) and a weird guy named Barry ends up showing up. I don’t want to give anything away but after everything is said and done Morgan learns the truth about the death of her mother and discovers that someone she knows plans on taking her out next for their own personal reasons. It sounds like there is a lot going on in this movie, and while there is (some may even argue that too much is going on) it all connects and makes sense in the end, so don’t worry. As I said earlier we get a ton of cool twists and turns throughout the course of the film and I for one enjoyed them and thought that they helped make for a great movie.

I thought that the acting that takes place in the film was one of its biggest strengths. Jordan Phipps does an awesome job as Morgan and her performance if without a doubt the highlight of the movie in a lot of ways. She owns every scene that she is in and I can see a lot of big things in her future.  Not only is she mighty easy on the eyes but she is also a very talented actress that does an excellent job of bringing her character to life. The same could be said for Greg Fallon, who plays the oddball character Barry.

I thought that the character was very creepy and will most likely make a lot of viewers’ skin crawl with his performance. If I’d had it my way Fallon would have played Carnage in the Venom movie as he not only resembles  Cletus Kasady (Carnage’s host) but he doesn’t have a lot of trouble playing a believable psychopath as he does in this movie. I also thought that Janis Duley was great as the grandmother, and for some reason she reminded me of a demented version of the old school actress Billie Bird in a lot of ways. Without everyone that appears in this movie does a great job and they should all be very proud of their performances.

On the other hand, I did have a minor gripe about Close Calls. I thought that it did run a little too long and that it could have been trimmed down a bit for pacing reasons. Most people have a very short attention span these days and I could see some of these people becoming a little antsy with this film as it is longer than most horror films that they are used to. It didn’t really bother me that much that it was longer than I expected it to be, but I can see some viewers complaining about it being too long and a small part of me would agree with them to a small extent.

I thought that Close Calls was quite good and I am glad that I got the chance to check it out. It has a little bit of something for everyone and I think that if most people give it a chance they will be pleasantly surprised. If you like movies that have a great 80s feel to them then you will dig this movie as much as I did. Check it out, I have a feeling that you will be very impressed and if you are like me you are looking forward to seeing more of both Jordan Phipps and Richard Stringham as I predict great things for both of them.