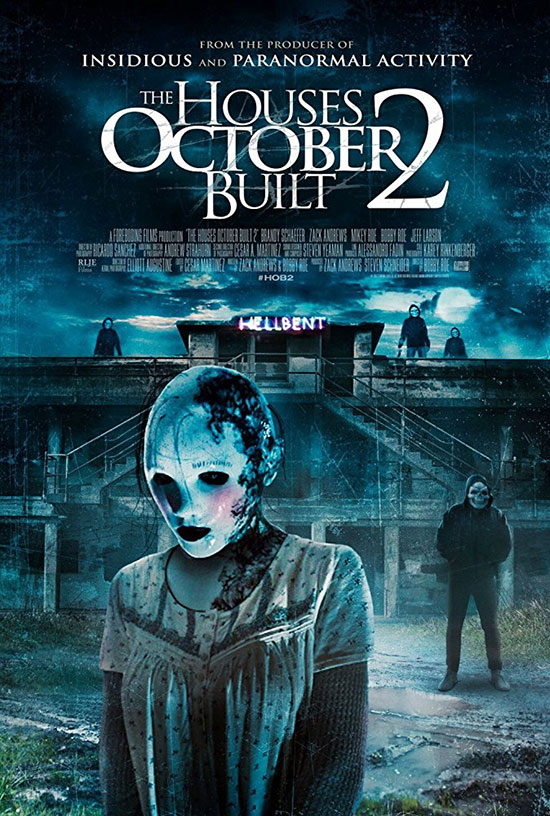 “In THE HOUSES OCTOBER BUILT 2, recovering from the trauma of being kidnapped last Halloween by the Blue Skeleton – a group who take “extreme haunt” to another level – five friends decide they must face their fears in order to move on. Heading back out on the road to visit more haunted house attractions, signs of the Blue Skeleton start appearing again and a new terror begins…

If you enjoyed the first “The Houses October Built”

“The Houses October Built 2” opens with a girl locked in the trunk of a car. (Do not pick up strangers!) I was glad that director Bobby Roe stuck with the film. His shots are great in the first film and they do part two justice. The beginning shot sort of reminds you of “Halloween” with the cool house. In “The Houses October Built,” we found the group stalked and there were creepy images and a road trip that should have taught them not to do this again. 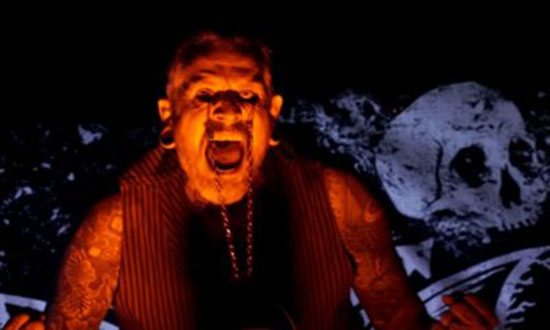 We find Zack Andrews, Mikey Roe, Bobby Roe and the reluctant to join again Brandy Schaefer. The paranormal groups are always in search of the haunted. They find a few random ones. (Someone should call Sam and Dean Winchester from “Supernatural” when things like this happen.) The creepiness of the haunted basement should have been enough for them.

The found footage and grainy shots are kind of cool. We now find them near a Light House and they have a drone now and still trying to convince Brandy they need her. Oh and here comes Brandy, “ready for Halloween adventures part two.” Nope, this is not going to go well.

Mikey runs off a speech that is sort of inspirational. He looks at the camera while smiling and tells them, “Nothing is going to happen.” We find them in Philadelphia, PA (Go Philly!) and they are back on the road in the RV like true ghost/paranormal groups. They are filming in Eastern State Penitentiary. I would recognize that landmark anywhere. If you have never been to Eastern State Penitentiary. www.easternstate.org/

We find the group near the water with the drone…. And alcohol because why not! “Should I really be drinking and droning?” They are now on Main Street in Anoka, Minnesota. The “Halloween capital of the world.” (I need to visit this place!) “They started trick-or-treating in this town.” 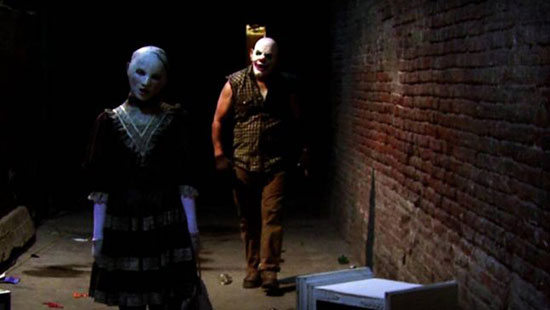 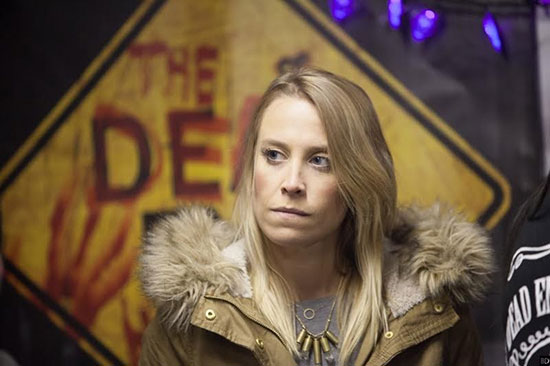 They set up briefly and they are back on the road. When they arrive at the next stop and the next haunted location. The shot gives you the feeling that someone may be watching them. They begin the “Blue Skeleton” conversation. It is cool how Bobby Roe is doing the found footage shots while having one of the guy’s interview people. We find one of the dudes interviewing a guy dressed like a demon and he tells them to seek out “Hell Bent.”

It is funny in a way watching this and seeing them go through the haunted hay ride. All the crazy, awesome Halloween haunts! (It sort of makes you want to drive across country and visit all the amazing Halloween places)

The group is on the road again and we see pumpkin launching! All of them are getting awesome zombie inspired make-up done. They wind up at the Zombie Pub Crawl. Okay so by now there was an eating contest (it was intense) and some throw up and a dumpster involved.

Oh, there is that creep out of sort blue tint again! Something is coming! They find themselves at a house in Perry, GA. Lots of cool drone shots and now they are heading to compete in the Zombie Run! They have dodge zombies and make it through to the end. This obstacle course they are running is crazy. You go through everything from land to water. 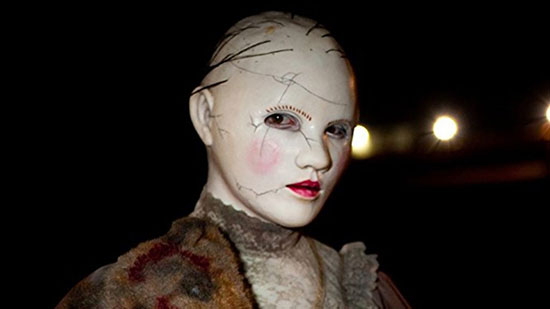 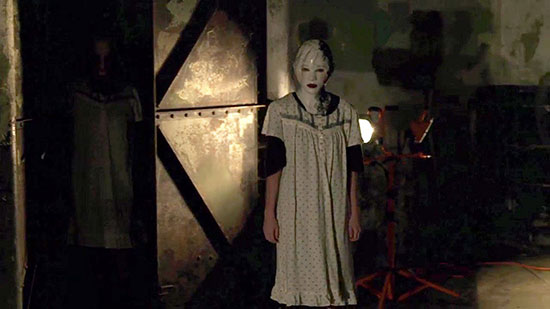 They are back on the road and they see a sign “Seek out Hellbent” (nope, turn around, go back! “Do Not Pass Go.” But what do I know?) They find themselves at another Haunted location that is “Adults Only.” “Halloween season is in the air.” It is “Chamber of Horror.” They interview some of the locals at the haunt and they have some interesting takes on what is going on.

They find a random creepy dude that may or may not be part of the haunt. The manager of the haunt is not too concerned about this creepy guy. Brandy is done and they still have haunts to travel to. The blue tint comes back and now all sorts of creepiness is happening around the RV. They were also parked in camp grounds parking and they wind up parked in front of a dilapidated building and a clown holding signs telling them to “Seek out HellBent.”  (Yeah, I would say now would be a good time to haul ass.)

Nope! They are staying! Staying at the crazy place with clowns! (Don’t follow clowns people!) It was sort of slow-paced but now it is starting to move at a better pace. The clowns however. No, no way! I would leave. Sorry dudes, I love you guys but bye!

They went in this creepy building and put hoodies on that covered their faces after following clowns. And bring in the chloroform! They shut the lights off and now the guys are missing and Brandy is alone with some random person or clown hovering over her. Now we are at the point where Jigsaw, Leatherface, Jason Voorhees and Freddy would have killed about twenty people by now.

It seems they take this haunt slightly more serious. You are not sure if this is a snuff film or it is really happening? So far it is not looking real good for anyone and if this was sort of prank? This is the worst kind. Brandy manages to get away from one dude but another masked dude shows up and now she is trapped in a room that looks like something Jigsaw would have designed. 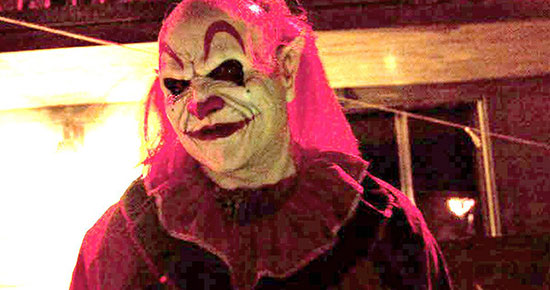 Brandy is now in the room and these girls with masks on and nightgowns come out. Brandy gets outside and she is running. She is outside and on TOP of the building as I yell at my television! Brandy goes back down the steps to find a group of masked men coming outside towards her. Now you don’t know what is what? Brandy is learning some interesting new facts. This is all kinds of wrong and everything is not what it seems. Oh, Blue Skeleton how we appreciate you in the land of horror.

The pan out on YouTube of “Coffin Girl” makes my heart skip a few beats. If you appreciate word play, you will appreciate the ending. So stay away from Hellbent.