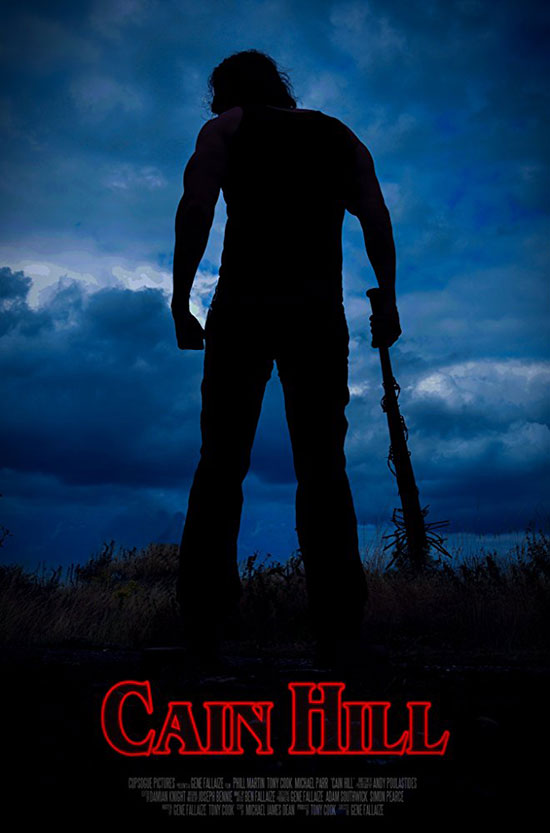 A group of documentary filmmakers are filming a TV special about the events which occurred at the famous and mysterious abandoned Cain Hill asylum many years earlier, and the unexplained abductions and murders that have occurred at the site since then. The group soon learn that one of the inmates never left Cain Hill at all.

Cain Hill is a movie about a group of filmmakers going to an old abandoned asylum that is surrounded by mystery and legend, and the danger that inevitably befalls them. Heard that premise before, haven’t we? Only about a hundred or so times. Right away, we’ll begin this journey by asking a couple questions: What does Cain Hill have to contribute that will make it stand out in the big ocean of similarly-themed films? Is there anything memorable that this cast or crew can show us that, five years down the road, will stick with us, or will this film just end up another mediocre entry into the wide world of “cabin in the woods”-style horror movies? Well, it’s with open minds and crossed fingers that we head into the asylum…

Directed by Gene Fallaize (see also Dark Ascension), Cain Hill is a British horror film written by the team of Fallaize, Michael James Dean, Phill Martin (who also plays Chester Lockhart), and Tony Cook (who was a zombie in Shaun of the Dead, a football hooligan in Eastern Promises, and a soldier in V for Vendetta). Right up front, the film gains a bit more “street cred” with the diehard horror fans when “Scott Spiegel Presents” appears on the screen (Spiegel, of course, famous not only for his roles in Sam Raimi films, but as the director of the cult classic slasher, Intruder). Soon we meet our cast of expendables: Leonard (writer Cook) is the producer, Richard (Edward Elgood) is the director, Mary (Hannah Jacobs) is the researcher and expert on the Cain Hill Asylum stories, and Michael (David Whitney) is the editor. There’s also Steve (Ben Mansbridge) and Marcus (Jason York), who I’m sure also have an important reason for being there. The crew starts out about town trying to interview people about the asylum, a la The Blair Witch Project, but finding no one wants to talk, they head over to a pub to do some drinking. Of course they run into members of the “You’re doomed!” crowd, who warn them to stay away from the old hospital…and, of course, they ignore them. Mary gives us a little backstory on the asylum, how a bunch of people have been murdered there, and how all of the survivors tell of Chester Lockhart, a former inmate and a hulk of a man who carries a Negan-style bat-with-nails and kills as many people as possible. Interest finally piqued, we can move forward.

Cain Hill is set up like the behind-the-scenes of a found footage film – the cast is a film crew, and the film crew sets up their cameras all over the asylum, meaning everything is being filmed – but it isn’t a found footage film. There are times that we see what the crew’s cameras see, but these shots are few and far between. One might think this would give the film greater opportunity to shine, as it is not strictly limited to first-person POV shots, and when it comes to the writing and the big picture, it is better executed than the average found footage film. But somehow, even though this is essentially a slasher film, it comes across a bit on the dull side. It could be the pacing, or the fact that there is no tension or mystery (we know who the killer is right up front), or simply the lack of slasher-style gore, but Cain Hill seems to have trouble getting going, and once it finally does it insists on going ten under the speed limit while staying in the left lane.

Actually, there are a number of reasons that this film never really takes off. There’s the “false” beginning, a scene of a woman being killed by a masked man, that is actually the filming of a documentary about the people who we are about to watch get killed, a scene that ends up more irritating than anything else; the narrative version of the cat-in-the-garbage-can jump scare. Then there’s the fact that nothing gets going (as far as the “horror” angle goes) until almost 30 minutes into the 82-minute film. There’s also the pointless, contrived “romance” between Mary and Richard that doesn’t add to the story and doesn’t ever go anywhere. Or maybe it’s just the Stranger Things font used on the movie poster that rubs us wrong way even before the first scenes ever play. But I think overall it’s the missed opportunities of what could have been a creepy (or gory) slasher set at St. Crispin’s Psychiatric Hospital in Northampton, England, an eerie (and allegedly truly-haunted) setting that grabs the audience at first sight but is never fully utilized. Whatever the main culprit, by the time the final credits roll, we can’t help but feel like this could have been something special, key words being “could have been.” 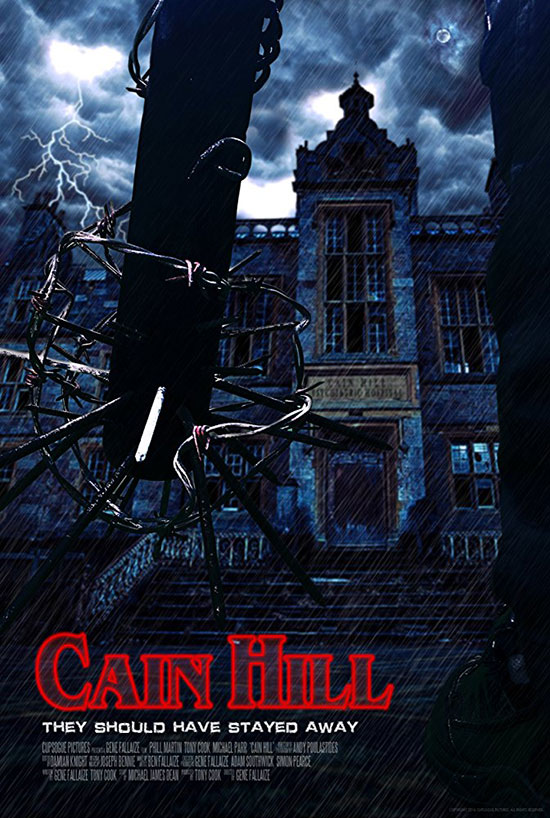 Cain Hill is far from a total disaster – there is competent acting, a decent storyline, and some good direction and camerawork on display. Unfortunately, it ends up being somewhat forgettable. Looking back at the questions we asked ourselves up front, there doesn’t seem to be anything in this film that stands out as remarkable, and nothing here that adds to the aggregate of the slasher subgenre. For the general audience, this is one you can drop toward the bottom of your “must-see” list. As for the Unearthed Films cult (of which I, myself, am a member), this ranks in the lower third of their catalog. However, there is a lot of potential in this idea, so in 20 years or so, if the current trend of remakes and reboots continues, maybe we’ll see Cain Hill again.